Mat Matters: An appreciation for the late David Williamson 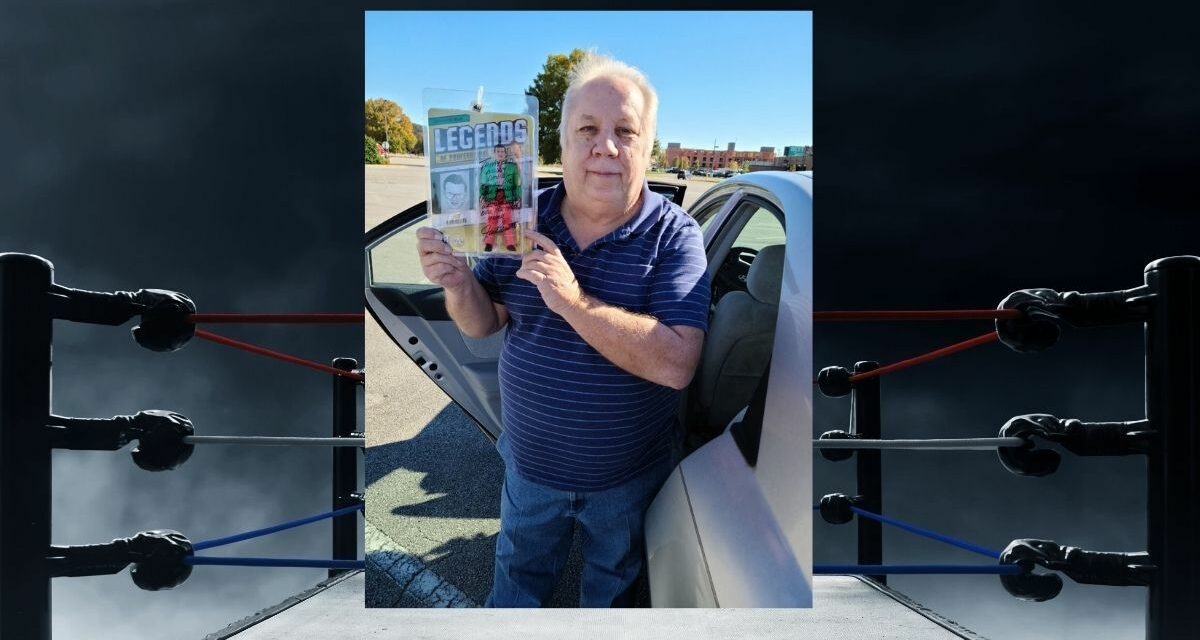 No one works alone, and there’s always someone out there that knows more about a subject than you do.

Those are certainly words that Steve Johnson and I lived by as we worked on the Pro Wrestling Hall of Fame series of books.

In wrestling terms, that meant reaching out to experts, whether they were knowledgeable about death matches, or who came in and out of Portland, Oregon, in 1962, or they mopped the floors of the arena Greensboro.

At various times, both Steve and I consulted David on his area of expertise, which was Knoxville, Tennessee, and its environs.

“David was as synonymous with wrestling in east Tennessee as Don and Ron Wright or, for that matter, anybody who put on a pair of tights,” recalled Johnson. “His willingness to share videos (yes, old-school videocassettes), nostalgia collections of Southern Wrestling Memories and the pics he took were invaluable in bringing attention to a lesser-noticed area. Several years ago, we were sitting at an outdoor legends show in Knoxville and he was rattling off info faster than I could take it down. We’ll miss Lone Ranger.”

It turns out, we weren’t the only ones who had relied on David’s knowledge, and knew of his near-photographic memory for dates and events in pro wrestling history made him one of those “walking encyclopedias” that are treasured. Historians could build on his collections and dig deeper.

“For anyone who knew David, he was one of wrestling’s great record-keepers and much more. And not just of Knoxville, Tennessee, or the amazing southeast territories going back as far as possible on each. But Florida, the Carolinas, nearly everywhere,” explained Mike Lano, who, at various time was a newsletter editor, radio/TV host, and photographer. “From the early 1980s on, he’d send old original newspaper show ads, results always accompanying his detailed, hand-written notes.”

“For 20 years I published my newsletter Wrestling – Then & Now,” said Evan Ginzburg. “David Williamson graciously — without any compensation — wrote pieces on his Southern-based Old School wrestling heroes. He also sent countless clips and such, again at his own expense. The man was selfless. Like so many of us, going to wrestling as a child with family and friends were amongst his greatest childhood memories and he savored them, relived them in print, and as a historian/superfan helped preserve them.”

Lano found Cassette Wrestling News particularly interesting and appreciated Williamson’s additions. “David said he loved that CWN was different, because it wasn’t put to paper. Each issue was on a physical tape cassette. Jeff would record us talking about current results from areas we covered and a few times had David discussing the most obscure (but incredible) history events of interest to him dating back to the 1940s.”

The arrival of the internet changed the way information was shared — but David Williamson remained with a foot in both worlds, sending out packages of results and clippings as often as he answered emails, posted on message boards, or contributed to clipping sites, like the National Wrestling Clipping Alliance.

But that also meant that flame wars could start instantly, and Williamson had his detractors online, who didn’t necessarily appreciate his take on a situation or who questioned his memories or posts.

Allen Moore and Ed Harrison run the Chattanooga Wrestling Memories site on Facebook, and were the ones who shared the news of Williamson’s passing. According to Harrison, “David was diagnosed with advanced tongue cancer and throat cancer back in November 2021. He had kept it private on Facebook until he made a post about his condition on the Mat Memories wrestling Facebook page last week,” explained Harrison. “The chemotherapy and radiation treatments were really starting to take a toll on his body.” Williamson was 70 years old, born July 10, 1951. He went to Cleveland High School, in Cleveland, Tennessee, and then studied at The University of Tennessee at Chattanooga. He is survived by his wife, Cheri, daughter, Rachael, and his grandson, Ethan.

Both Moore and Harrison praised Williamson, who they met through Scott Teal’s Whatever Happened To … ? publication in 1993.

“David really knew his history on wrestling, especially Nick Gulas’ wrestling,” recalled Moore. “He used to go to Gulas promoted shows in Cleveland, Tennessee, in the ’60s, which was David’s hometown. We swapped many a VHS tape back and forth through the years. David also sent results of many indy shows to various publications., including some that I promoted as well. Because of our love of Gulas wrestling, especially the wrestling from Chattanooga that was here every Saturday at the Memorial Auditorium and on local WDEF TV12 hosted by Harry Thornton, we three were friends from ’93 till to this day.” 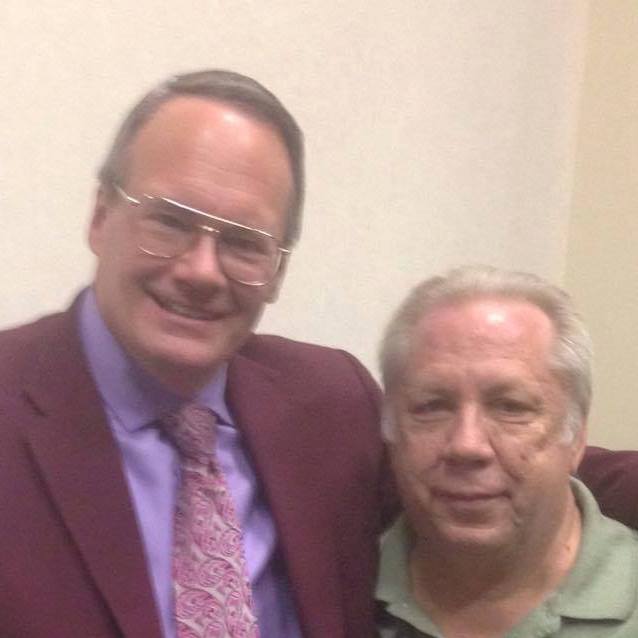 Jim Cornette and David Williamson in Ringold, Georgia, in 2015. Photo by Jonathan Whisenant

Jim Cornette was the beneficiary of Williamson’s work, said Harrison. “David sent Jim Cornette a lot of Nick Gulas wrestling nostalgia over the years. David said Jim was always very grateful for everything he sent to him.”

Jonathan Whisenant took the photo of Cornette and Williamson above. “They were opposites in a lot of ways, but great friends when it came to wrestling,” he said. “David mailed myself and my son wrestling DVDs on Christmas and our birthdays for years. I’m sure that can be said by numerous people.” 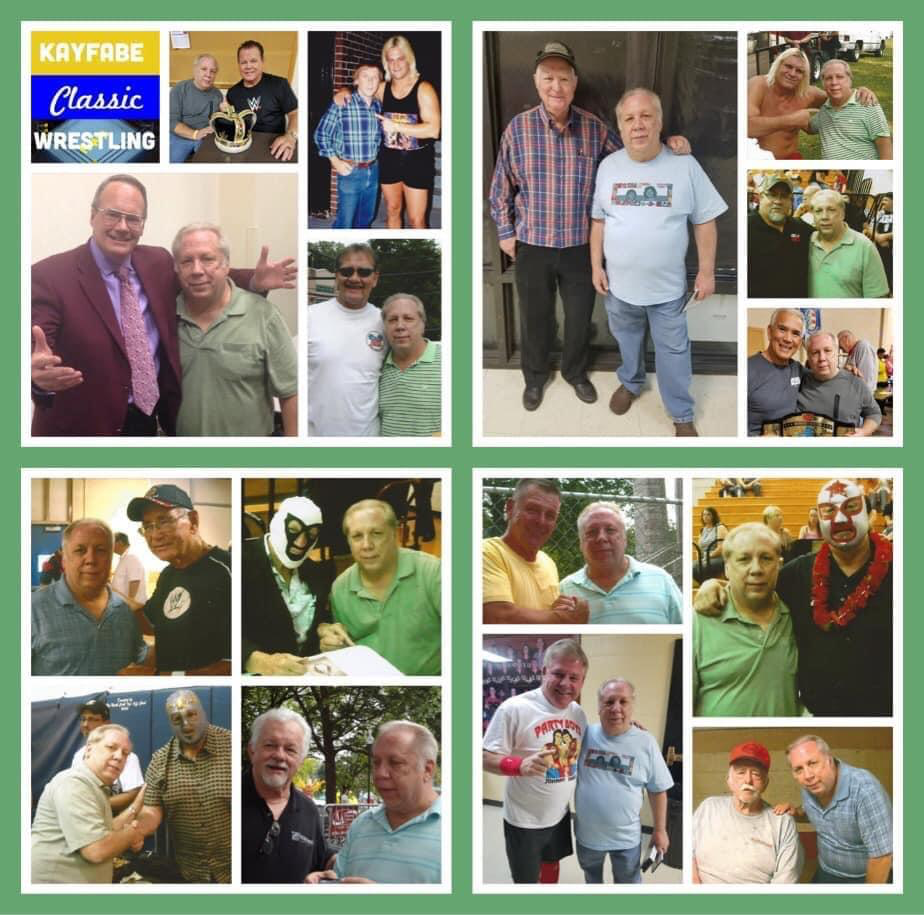 A collage of  photos of David Williamson with various wrestling legends, put together by Jonathan Whisenant

There was a deep unselfishness in Williamson, said Harrison. “David was very generous to the wrestling legends. He would mail them newspaper clippings, VHS tapes, DVDs and articles that had their names in it. He never asked for anything in return other than a phone chat with the legend just to make sure they had received what he mailed to them. That was his reward, just knowing he made their day, sending them videos or newspaper clippings of their glory days in wrestling.”

Ginzburg loved that Williamson was able to connect with the wrestlers. “That he later befriended some of his wrestling heroes and shared some of his collection with them as well was a dream come true for him,” he said. With the exception of his family, you could say that wrestling was his true love in life. And I applaud someone like David who was willing to share so much of that with the world.”