SmackDown hits potholes in the early road to WrestleMania 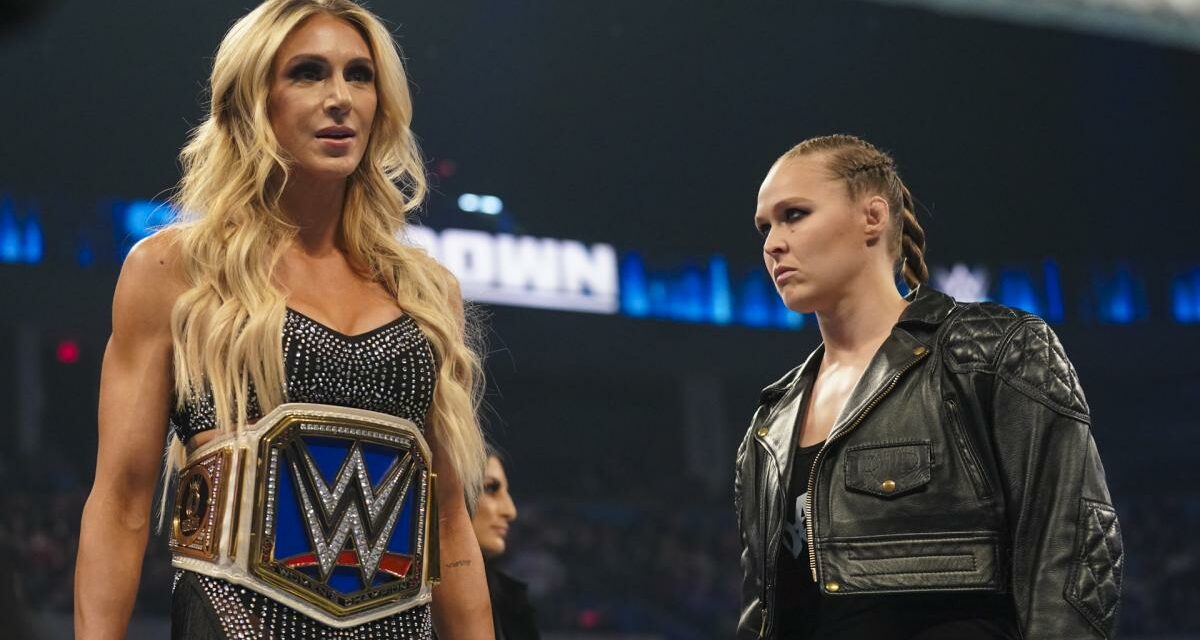 Lots of short matches, setting up for two major pay-per-views, and a mission to convince you that the events between Day 1 and the Royal Rumble didn’t really happen — all on SmackDown tonight!

Paul Heyman gets plenty of time on the mic to open the show — well, actually the show begins with over 5 minutes of review footage from the Royal Rumble — and he has one job: re-write the past month of Universal Championship history.

After the Royal Rumble was used to reset the table following the events of the Day 1 pay-per-view, when Roman Reigns had to sit out due to contracting COVID-19 and Brock Lesnar shockingly took away the WWE Championship from Big E Langston in a Fatal Five Way match, Heyman has to spin a story about how he mistakenly joined forces with Brock Lesnar until he realized his mistake and stepped back in line with the Tribal Chief. 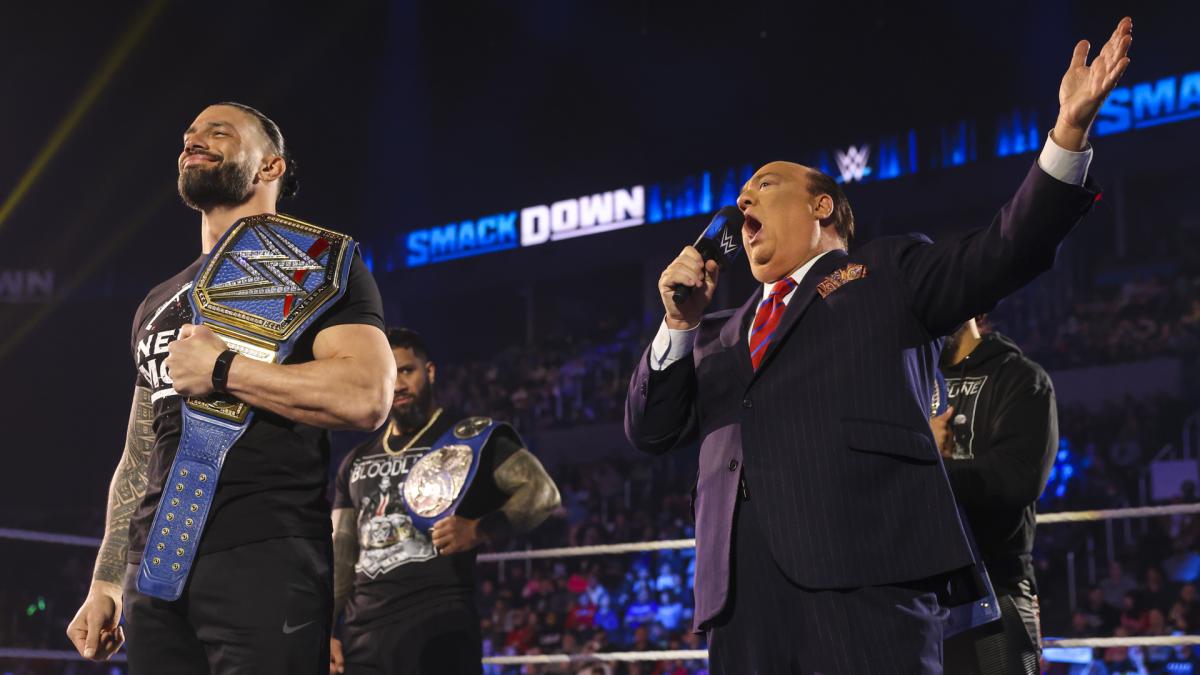 Heyman sings like a canary and carries the tune for a long, long time. Photo: WWE

It’s a massively long piece of retconning that winds and twists its way around a very simple point: it all comes down to Lesnar and Reigns in another WrestleMania main event. Of course, there’s still the Elimination Chamber to come before then, and there’s nothing like WrestleMania season to bring a certain someone out for a match: Goldberg interrupts the proceedings in the ring and challenges Reigns to a match at the Saudi Arabia show in two weeks’ time. Reigns simply nods his acceptance.

Ricochet ducks an early punch and focuses his own punches on Holland’s protective face gear, but Ridge turns it around with hard body slams and corner throws. Ricochet tries a baseball slide as Holland is out on the floor, but he’s grabbed and thrown into the apron instead. As they get back into the ring, Ricochet grabs Holland between the ropes and hits him with a Codebreaker for the quick win.

After a commercial break, we learn why the match was so short: it has led to another match.

Good friends, better enemies Cesaro and Sheamus start in the ring, with Sheamus gaining the upper hand with his Beats of the Bodhran and a clothesline, but Ricochet makes it into the ring with a flying elbow and springboard moonsault. Cesaro re-enters with a discus clothesline on Sheamus and sets him up for a superplex. He hits it, but doesn’t notice Holland tagging in on Sheamus on the way down, and Ridge finishes Cesaro off with Northern Grit.

Erik has the advantage early with an overhead throw and driving knee to the head, but Jey distracts the Raider as he climbs the ropes for an attack. Jimmy follows with a superkick and an Uso Splash for another quick match. 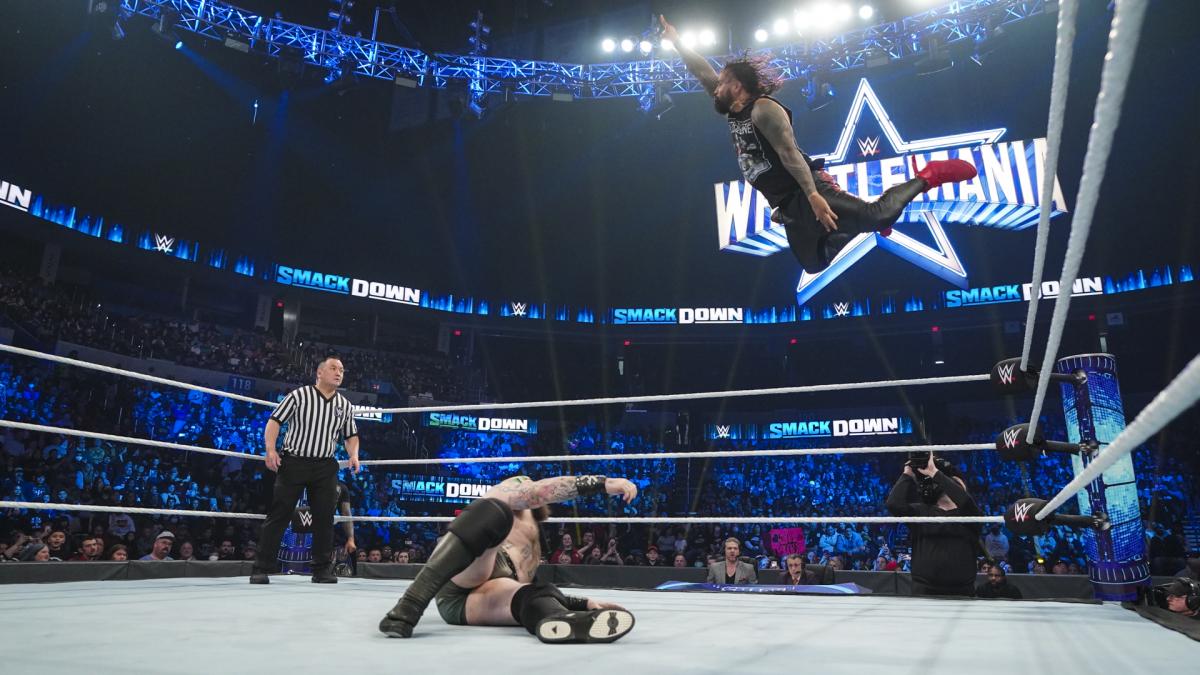 What, or who, is Jimmy looking at? Photo: WWE

Aliyah taunts Natalya with her “3:17” t-shirt, noting the record-setting time of the win that Aliyah gained over the Hart family member. Natalya is indeed frustrated and it allows Aliyah to land a hurricanrana and a bulldog reversal. A clothesline by Natalya turns the tables, but as the fight spills to the floor, Aliyah runs Natalya into the barricade (from so far away it looked silly) and ducks back into the ring before the count of ten.

Drew McIntyre has some time in the ring to address his return, telling a story of how a doctor told him he wouldn’t make it back to the ring in time for the Royal Rumble, but that McIntyre disagreed and here he is. He has a bone to pick with Happy Corbin and Madcap Moss, and out they come to take their first comeuppance. Moss takes a Claymore and Drew promises Corbin that this is just the beginning.

Backstage, Sami Zayn is with Adam Pearce and Sonya Deville, hearing news that he’s finally getting his Intercontinental Championship match against Shinsuke Nakamura in two weeks’ time on SmackDown. Not, of course, at the next afternoon in Saudi Arabia at the Elimination Chamber, as Zayn does not perform in that country for uncertain reasons (but almlost certainly due to his Syrian descent).

Also, it appears that Zayn is not yet finished with Johnny Knoxville.

Natalya also appeals to Pearce and Deville for a Dungeon Match against Aliyah next week, and it’s granted. I guess we’ll learn what that means later.

Here is your nearly weekly reminder that Championship Contender’s matches are dumb. Imagine needing to get your partner to accept a wedding proposal in order to earn an opportunity to propose to them later.

By the way, Rick Boogs has a guitar malfunction and can’t play Nakamura to the ring as usual. He still screams well enough, though.

Just before the bell, Zayn struts to the ringside to join the commentary team and get a closer look at the match. Nakamura hits baseball slide/German suplex combo, but Mahal counters soon afterwards with a high knee. Nakamura is trapped in a headlock for a short while, elbowing his way out and landing a Kinshasa for yet another quick match.

Backstage again, Pearce and Deville have another visitor as Naomi is still seeking a match with Sonya. Instead, Deville promises her a championship match against Charlotte Flair, and Pearce confirms it.

Kayla Braxton is with Natalya and they both head to the locker room to explain a Dungeon Match to Aliyah. Instead, Xia Li steps out of the room and, although Li walks away, Natalya has second thoughts about confronting Aliyah.

As Angel misses an opening dropkick and suffers some double-teaming by the New Day, Michael Cole and Pat McAfee express how great it was that Kington almost pulled off another acrobatic save at the Rumble. Humberto enters and gets the same treatment, but manages a clothesline to the back of Kingston’s neck, allowing both Lotharios to kick Langston off the apron to the floor.

As Kingston tries a springboard attack from the apron to the floor, Angel catches him with a kick to the jaw going into a break. Back from commercials, Kingston kicks out after a back suplex and blocks a Humberto moonsault, allowing him to tag in Langston. Big E goes belly-to-belly crazy on both Lotharios, adding a splash on Angel, then hoisting him up for a top-rope bulldog from Kingston. 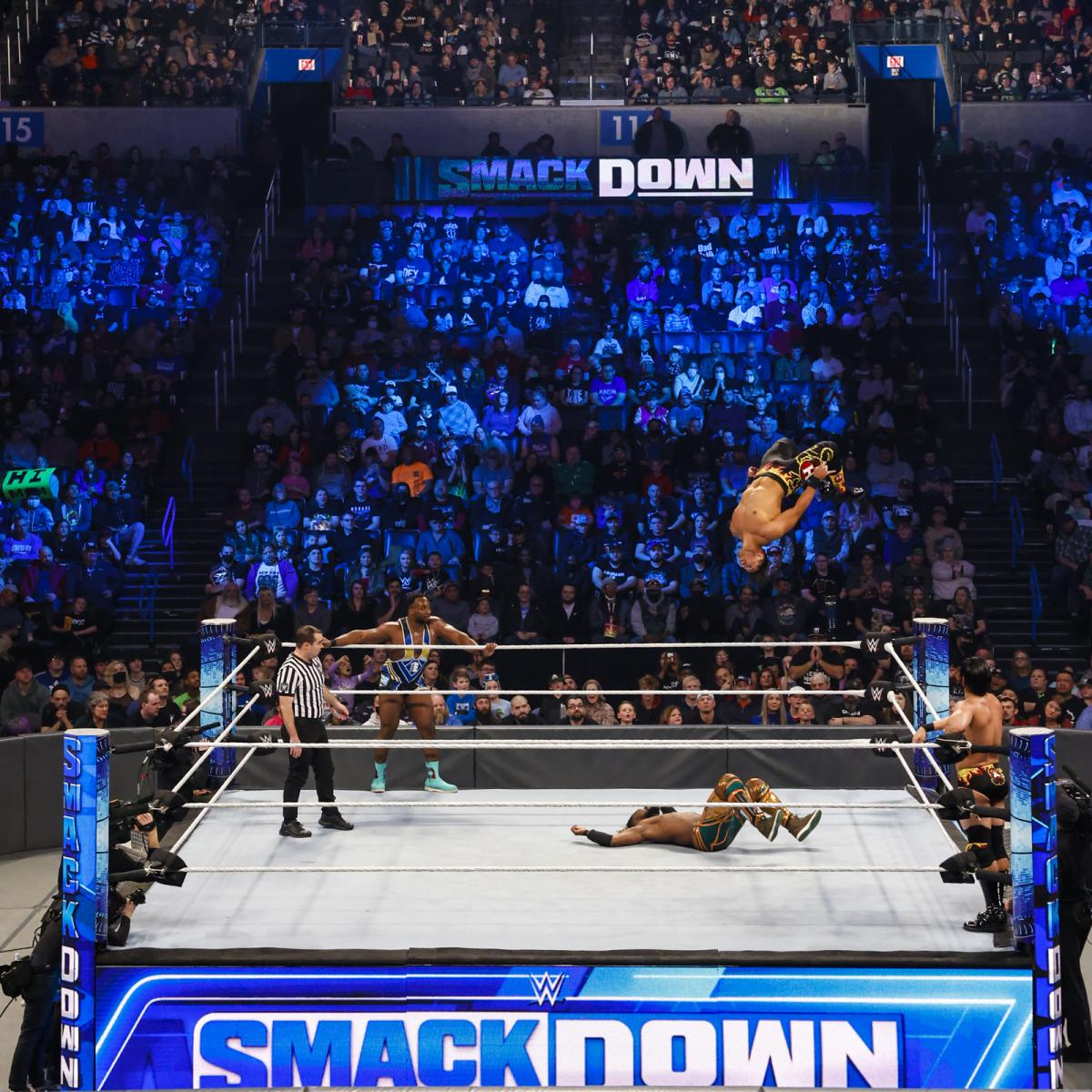 Kingston starts getting his defenses ready as Humberto takes to the air. Photo: WWE

Angel dodges Trouble in Paradise and Humberto tags himself in to deliver a missile dropkick for a two-count. The New Day regroup and try another double-team move with Kingston from the top rope; this time he assists a Big Ending and that’s enough.

Our final segment of the evening has Charlotte Flair in the ring with Sonya Deville. Deville announces that Ronda Rousey, as winner of the Royal Rumble, has chosen Becky Lynch as her opponent at WrestleMania, so Deville is going to let Flair pick her own opponent for the big show.

By the way: the entire point of Flair entering the Rumble as champion was that she could win and therefore hand-pick her opponent. If she’s doing that anyway, then what was the point?

Flair talks herself up and says it makes sense that Rousey would pick Lynch because a “Mom versus Mom” match is an easier route. Wow … it’s like Flair doesn’t even know what a mom is.

Anyway, as Flair picks Sasha Banks, we’re all just waiting around for this to move on to the next step, because Rousey has already been announced as appearing on the show tonight and we’re down to just a few minutes left. Well, here she comes.

Rousey says that she hasn’t picked her opponent yet … but she has now and officially challenges Flair to a WrestleMania title match. Flair says that the title is her baby, and that it’s prettier than Rousey’s. Oh, burn.

Deville tells Rousey to calm down because she runs the show and, unsurpisingly she ends up in an armbar for her troubles as Flair walks away, keeping an eye on her WrestleMania challenger.

Revisionist history abounds tonight. It really shows is the lack of effort being given to longform storytelling on SmackDown right now, and it’s hard to get invested in the storylines.