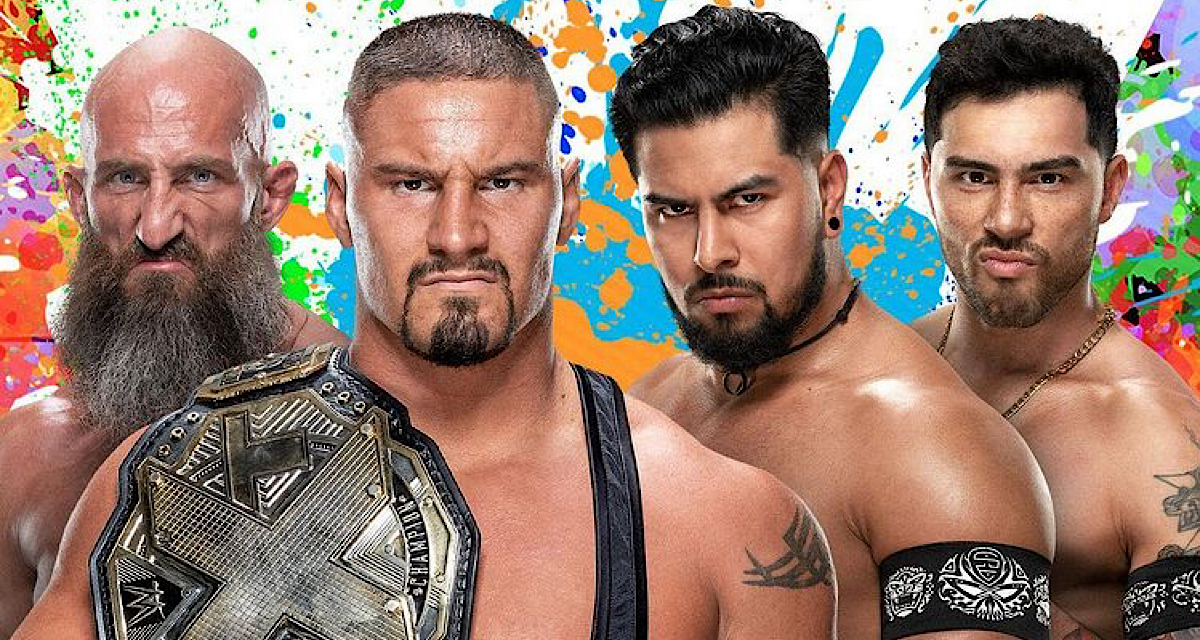 WWE disenchantment continues on with another edition of NXT. Dominated by WWE’s most criticized characteristics, the now infamous brand of inauthentic and overwritten programming takes another Tuesday night.

Imperium vs Diamond Mine

The newly rebranded Gunther enters to “WALTER” chants before the six-man brawl begins. His teammates in Fabian Aichner and Marcel Barthel have the upper hand over The Creed Brothers, and Gunther takes down Roderick Strong preceding picture-in-picture. Some action-packed back-and-forth later, Gunther powerbombs Brutus Creed for the pinfall victory. The name change clearly didn’t hinder anything in-ring, but that didn’t stop the “WALTER” chants heard throughout.

“Lemme talk to ya,” says LA Knight before being interrupted by Joe Gacy and Harland, offering to help him “move on” from Grayson Waller’s restraining order.

Beforehand, Jade monotonously answers an interview question about her teaming with Gonzalez in the Dusty Cup. And meanwhile, cameras casually catch Ray kidnapping Dolin and Jayne. As the women’s division devolves into bad theatre, Gonzalez remains a cornerstone, dominating over her opponent. Following a one-sided affair, Gonzalez delivers the Chingona Bomb for three but has a newfound respect for Jade.

“Petey Poppins” Pete Dunne is back in NXT, and he’s gunning for Tony D’Angelo. In a promo package, he challenges him to a steel cage match.

Backlash over Sarray’s potential new school girl character might’ve been overdone, because in-ring, nothing has changed. “Reporting live” is the voice of McKenzie Mitchell, who gives an update on Kay Lee Ray, who is back in the building. Sarray eventually connects with her signature dropkick and Saito Suplex for three.

“Blackheart and Breakker are gonna rip the Legados in half,” says the NXT Champion to his partner Tommaso Ciampa. It looks like they can coexist after all!

The most charismatic duo in NXT, Carmelo Hayes and Trick Williams, enter the ring with microphones. As expected though, they’re interrupted by Cameron Grimes, who throws out some Spongebob Squarepants insults. It’s apparent whose lines are being written for them; surely, Hayes and Williams’ have free range, because no backstage writer can replicate their swagger and verbiage.

Edris Enofe and Malik Blade are discussing tag team names when Kay Lee Ray and Mandy Rose barge into the latter’s lap. “Looks like the competition to get a date with Mandy Rose is stiffening up,” says commentary.

Diamond Mine’s backstage interview is interrupted by Grizzled Young Veterans, as they wrestle next week in the Dusty Rhodes Tag Team Classic semifinals.

Babyface Knight brings an infectious energy heard by the audience’s feedback, but it’s stifled by Gacy’s attacks. Knight is taken out ringside, and as Harland distracts the referee, Grayson Waller comes into frame with a stunner. Knight beats the count, but a springboard lariat from Gacy puts him away. The massive bodyguard Sanga chokeslams Knight post-match as Waller announces a matchup between them for next week.

“Who’s gonna stop him?” asks a seriously-toned Robert Stone regarding his partner Von Wagner. Both suited up and professional, this pairing looks to have legs.

Between Choo’s trap-infused lullaby entrance music and pajama onesie attire, her schtick is beyond ridiculous. It’s “freshly squeezed” without the pulp or cool factor. Judging by her explosive suplexes, Choo has in-ring ability, and she inevitably picks up the victory. “We had a deal,” says Tiffany Stratton, who offered to take Miller shopping for beating Choo. But on the entrance ramp, Choo reveals Stratton’s stolen credit card.

Persia Pirotta and Brooks Jensen respectively ask Indi Hartwell and Dexter Lumis for relationship advice, which leads to presumably nothing.

“Nikkita Lyons comes from the world of entertainment,” she says, explaining her rockstar family background. Her character is supposed to be musically inclined, but this promo package suggests otherwise. That rap was something else.

Anthony makes his NXT debut tonight against Chase University’s own. He disrespectfully stomps on the Chase U flag, which provokes a fired-up comeback from Chase, leading to the eventual victory. “Next week, Von Wagner, you get an Andre Chase University-sized ass whooping,” says the professor.

Kay Lee Ray dumps a bowl of pasta and an entire cake on Mandy Rose. What a shameful waste of good food.

Ciampa and Breakker have great displayings against Joaquin Wilde and Raul Mendoza in the opening goings, and they can ultimately coexist after all. After picture-in-picture, Santos Escobar attacks Breakker with the referee distracted, giving LDF the upper hand; every time they’re on offense, it’s a reminder of how underrated this tag team really is. They survive Ciampa’s comeback, but Breakker spears Mendoza in half, and Ciampa throws Wilde through the announce table. Breakker hits the finishing slam for three, standing tall over a retreating Escobar.

Once again, Mandy Rose and Kay Lee Ray take the screen. Rose finally lets Ray have a championship match, and the challenger raises the title high before show’s end.

NXT has become a tough watch, and so many aspects are insufferable. The nonstop WWE branding, comedy, and lingo is so inauthentic, and the in-ring wrestling doesn’t make up for it. Lest we forget a spiraling women’s division that plagued the show, tonight wasn’t great.