Smackdown: Rollins throws Roman off his game before Royal Rumble 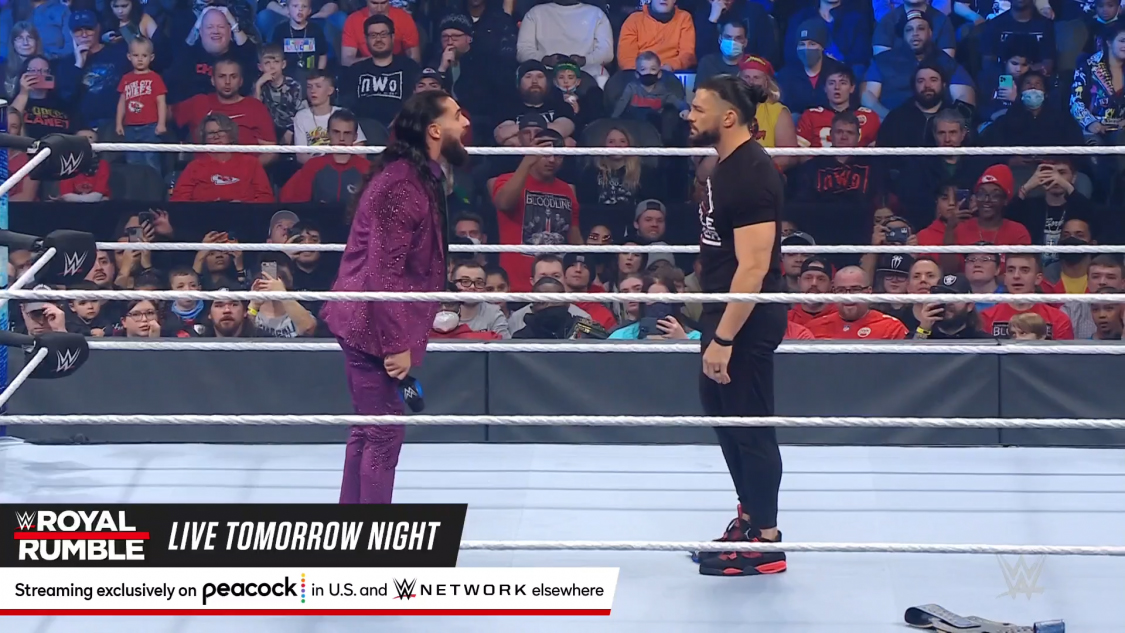 Tonight is the final Smackdown before the Royal Rumble. WrestleMania season is about to kick into full gear Saturday night. There are still some spots to fill in the Royal Rumble match, but there’s always a few empty spots for those surprises. Enough talk, although being WWE this show will start of with 15 minutes of nothing but talk, let’s head into the show.

Smackdown Women’s champion, Charlotte Flair, is headed to the ring. She will participate in the Rumble match and if she wins as the champion, she will hand pick her WrestleMania opponent. Flair promises to bring a championship to Kansas City, unlike the Chiefs. She outlines how she will win and puts over the Rumble match itself. Charlotte entered the Rumble match because she is the most dominate champion in WWE.

Shayna Baszler interrupts the champ. Baszler knows Flair is an incredible performer, but she will snap the champion like a twig if need be. IF Shayna wins, she will select Charlotte as her opponent.

Aliyah walks out on stage, even though if she doesn’t know if it okay she came out. She’s very excited to be in the Royal Rumble because it could lead to her first WrestleMania. Flair gives her a zero percent chance of the winning. Aliyah totes her record break win against Natalya. Nattie doesn’t want to her it and gets in her face. Shotzi joins the party, loving the chaos. That chaos will provide the perfect opportunity to seize the spotlight.

Flair has had enough and lashes out. No one in the ring deserves to be in the ring with her. Cue, Sasha Banks! The Boss is back and is ready to rumble. She smacks Flair in the face and a full brawl breaks out. Banks tosses Flair over the top rope. I smell and multi person tag match brewing.

Ridge Holland tells Megan Morant that he can still hear his face being broken by Ricochet. Now it’s time to return the favor. Sheamus gifts Holland a face mask for protection.

Ridge Holland and Sheamus vs. Cesaro and Ricochet

Former tag team partners Sheamus and Cesaro lock up to start the match. Sheamus runs into a clothesline and follows with a stomp. Ricochet tags in and hits an elbow from the top rope. Holland tags in and gets dumped from the ring. Ricochet flies over the top rope with a flip dive to take out Ridge on the floor.

After a commercial break, Holland is in the full control in the ring. Ricochet is draped over Holland’s shoulder, but Ricochet breaks free and is able to get the tag. Cesaro with European Uppercuts to Sheamus and dumps him from the ring. Cesaro with a running uppercut on the floor. Back in the ring, Holland has to break up a small package. Cesaro wants the Neutralizer, Sheamus escapes and Holland makes the blind tag. Holland head butts Cesaro with the mask and hits Nothern Grit. Ridge covers and gets the three count.

Before the match, Sonya tries to put pressure on the referee. This is Sonya first official match since SummerSlam two year ago.  The ref gives his instructions. Sonya ducks a strike from Naomi and ducks under the ropes. The ref backs Naomi off. Deville applies a chin lock. Naomi with a head scissors, sending Deville to the floor. Naomi with a drop kick. Deville catches baseball slide and plants Naomi into the floor. Deville nearly gets a pin after a spine buster. Naomi with a kick from the top turnbuckle. She splashes Deville in the corner and then goes up top. She connects with a cross body, but cant get the pin. Deville throws Naomi into the turnbuckle and follows with an inverted DDT. Naomi with a full nelson into a cover, but Deville kicks out. Sonya messes with the ring apron. The ref turns to fix it and Deville rakes the eyes. It’s still not enough to get the pin. Naomi hits the Rear View and follows with a split legged moonsault. Naomi covers and gets the pin.

Kayla Braxton is in the interview area with the Usos, who are barred from ringside tomorrow night for Roman Reigns’ match. They don’t care want Seth Rollins says because Roman will retain. The Viking Raiders walk up and the Usos says they stink. The Raiders show off their axes.

Sami welcomes Jinder Mahal and Shanky to his live podcast. They will be taking on Shinsuke Nakamura and Rick Boogs later in the show. Sami cuts Jinder off to promote the show he is hosting. And don’t bring up Johnny Knoxville. Jinder puts over his partner, Shanky, but then points out the Jackass is huge in India. Shanky loves the show. Sami disagrees. Thankfully, Rick Boogs interrupts with his guitar riffs. He introduces Nakamura. Shinsuke literally knocks Sami off the air with a kick to the head.

Shinsuke Nakamura and Rick Boogs vs. Jinder Mahal and Shanky

Got to love when the match starts during the commercial break. Zayn gets involved by yanking Nakamura off the apron. Boogs powers up, freaking Mahal out. Jinder makes the tag to Shanky. Rick Boogs picks up the win for his team with a pump handled slam on Shanky.

Kayla Braxton talks with Kofi Kingston and Big E and asks how it feels to have Big E back. Kofi loves it.

Big E and Kofi and teaming together for the first time in 18 months. They don’t show any signs of rust, taking the fight to Moss and Corbin. Big E and Kofi hit Moss with the Midnight Hour to get the pin.

Roman Reigns and Seth Rollins meet in the ring. Roman wants Kansas City to acknowledge him. Rollins tells Roman that he played him like a fiddle last week and thanks Roman for getting his cousins disqualified. Roman says the decision was easy. He got to punch Seth in the face and the Usos were spared to embarrassment of losing. Seth tells Roman he has shamed the family and shrugs off want Reigns has to say. Rollins talks a walk to memory lane, pointing out all the times he has beaten Roman. Seth knows Roman has done it all, except beating him when it has mattered most. Rollins tells Roman he will always love him, even when he takes the title from him.

Roman doesn’t have an answer. He has tried to forgive Seth, but he will never forgive him for breaking up the Shield. He hates him. Rollins calls him, the Bloodline, the entire family a joke. Roman shoves him and feigns walking away. Seth sees the attack coming and ducks. He rolls out of the ring untouched.