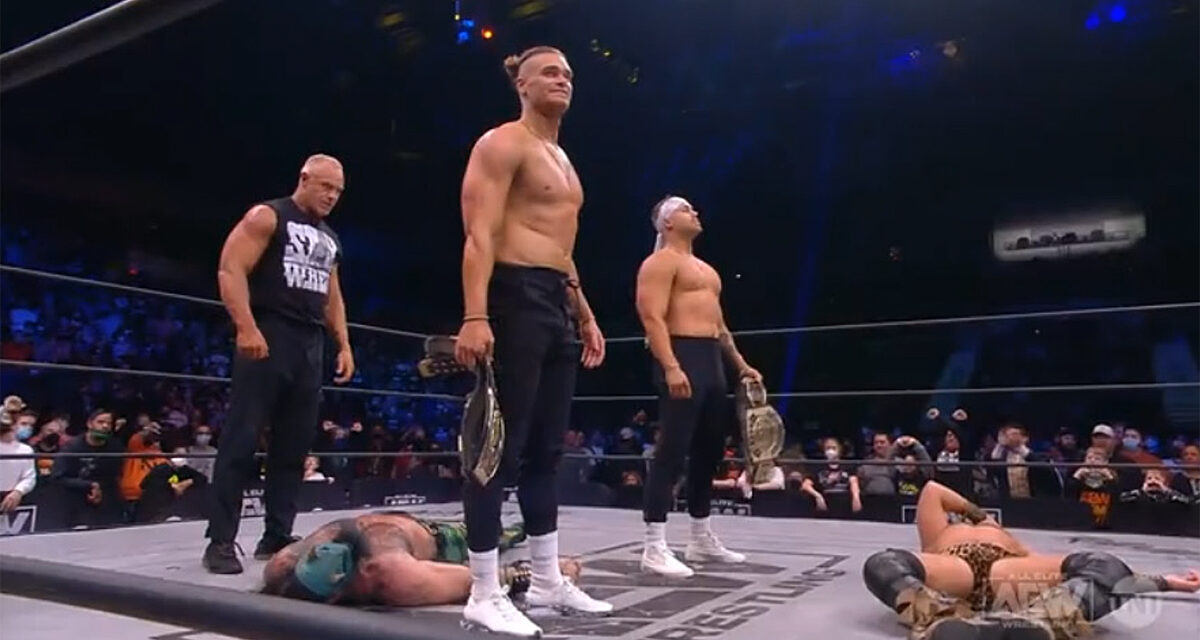 After a knockout Dynamite episode this week which featured everything but the kitchen sink Rampage was like the morning after you host a big party. Everyone is a little sluggish. There’s some cleaning up to be done. This week’s Rampage was kind of like that.

Although I am very, very high on The Acclaimed, Rampage was really a one match show this week: Jurassic Express defending their titles against Private Party.

And what’s with Private Party’s push? Like The Acclaimed, they are extremely talented yet ever since they have been lumped in with The Hardy Family Office they are nothing but background noise. AEW has the strongest tag team division in professional wrestling. They need to keep their eye on the ball and the talent if that is still going to continue to be the case.

Anyhow, back to Jurassic Express versus Private Party.

Not only does Matt Hardy come to the ring with Private Party but so does Blade. The Gunn Club is at ringside too acting like goofs, mugging for the cameras like morons.

The Gunn Club distracts Jurassic Express so they get blindsided by Private Party on the floor before the bell even rings.

Despite Luchasaurus being wiped out the official starts the match. Private Party goes for the Gin and Juice finisher on Jungle Boy who hasn’t even taken off his tag belt yet. Jungle Boy barely kicks out. A neckbreaker, foot stomp combination gets Private Party another two count.

Private Party both leap off the top rope. Jungle Boy rolls out of the way. Private Party hits nothing but canvass. After some acrobatics around Private Party, Jungle Boy tags in a furious Luchasaurus. Private Party flee the ring. Luchasaurus chases them down on the floor. Blade steps in Luchasaurus’ way. The dinosaur throws him into the ringside barricade. Isiah Kassidy stops Luchasaurus from putting his hands on Matt Hardy. He gets slammed on the ring apron for his efforts.

Hardy hits Luchasaurus in the knee with a steel chair as he stands on the apron.  Luchasaurus falls to the floor where The Blade stomps on his knee. Christian makes the save punching out The Blade. Private Party makes a wish on Luchasaurus wrapping his legs around a steel post. Isiah Kassidy leaps off Marq Quen’s back. Luchasaurus steps out of the way. Kassidy crashes into the ringside barricade. Luchasaurus clotheslines Quen to the arena floor.

Private Party each grab a leg in an attempt to stop Luchasaurus from tagging in Jungle Boy. Luchasaurus drags them both across the ring with him.

Jungle Boy takes on both members of Private Party. Boy splashes them on the floor almost knocking Quen over the ringside barricade and into the first row. 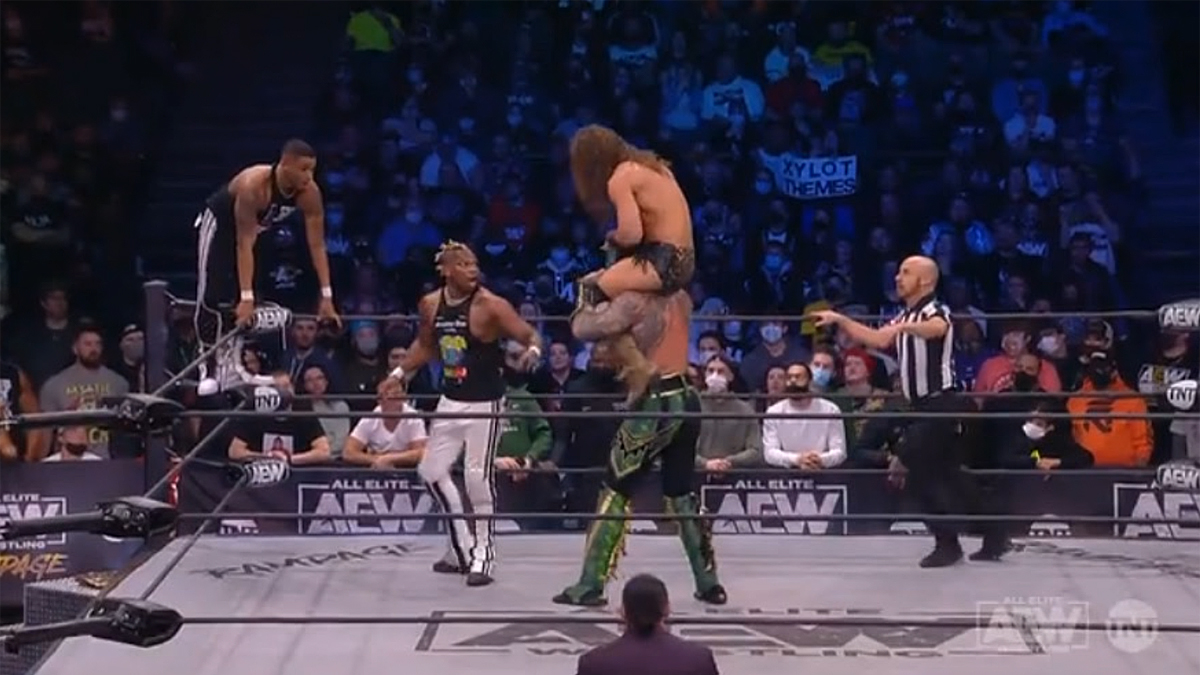 Boy has Kassidy in the Snare Trap. Quen leaps off the top rope with a Shooting Star Press onto Jungle Boy breaking the hold. Kassidy spins out of the ring after taking a Canadian Destroyer from Jungle Boy. Quen is pinned with the Jurassic Express.

The champs don’t even have a few seconds to celebrate. Billy Gunn attacks Christian on the floor throwing him into the steel steps while the Ass Boys…ummm…Gunn Club lay a beating on Jurassic Express. Luchasaurus is thrown into a steel post and Jungle Boy is cracked in the head with a title belt. Billy Gunn picks up Luchasaurus so that his boys can smash him in the head with both belts. The Gunn Club stands over the champions holding the titles high in the air.

Moxley enters hyped tossing a chair into the ring again.

Yo, Moxley. Welcome back but your wifey still ain’t called me back.

You are not hard. You are flimsy. We will send you right back to the garbage indies.

For real, you are getting cooked. Bowens is putting you to sleep like he was your book.

The Acclaimed will knock you out. Hey, the network called. They said…Watch your mouth!

Moxley clocks Caster from behind before the bell rings then turns his attention to Bowens just battering him all around the ring. Moxley takes the fight to the floor slamming Bowens into the ringside barrier and over it. Bowens and Moxley fight into the crowd. Back at ringside, Bowens mashes Moxley’s face into a steel post. Bowens stays on Moxley inside the ring lighting him up with chops. Moxley lifts up Bowens for a suplex and just drops him to the mat. Caster grabs Moxley from outside the ring. Bowens dings Moxley with a discus elbow for a two count. Bowens drop kicks Moxley on the top rope and superplexes him back into the ring.

Moxley back drops Bowens over the top rope onto Caster. Moxley leaps through the ropes taking out Caster…again. Bowens loses a slugfest in the middle of the ring. Moxley absorbs Bowens’ combination blows piledriving him for a two count. Moxley kicks out of the Claim to Fame. As Caster distracts the official, Bowens goes for the boom box. The official catches Bowens in the act. While the official moves the boom box out of reach, Caster throws Bowens a chain. Moxley drops Bowens with a cutter before he can punch him with the chain. Caster rushes the ring. Moxley clotheslines him over the top rope and pins Bowens with the King Kong Lariat and the Paradigm Shift.

Bryan Danielson is shown backstage watching the match and smiling. 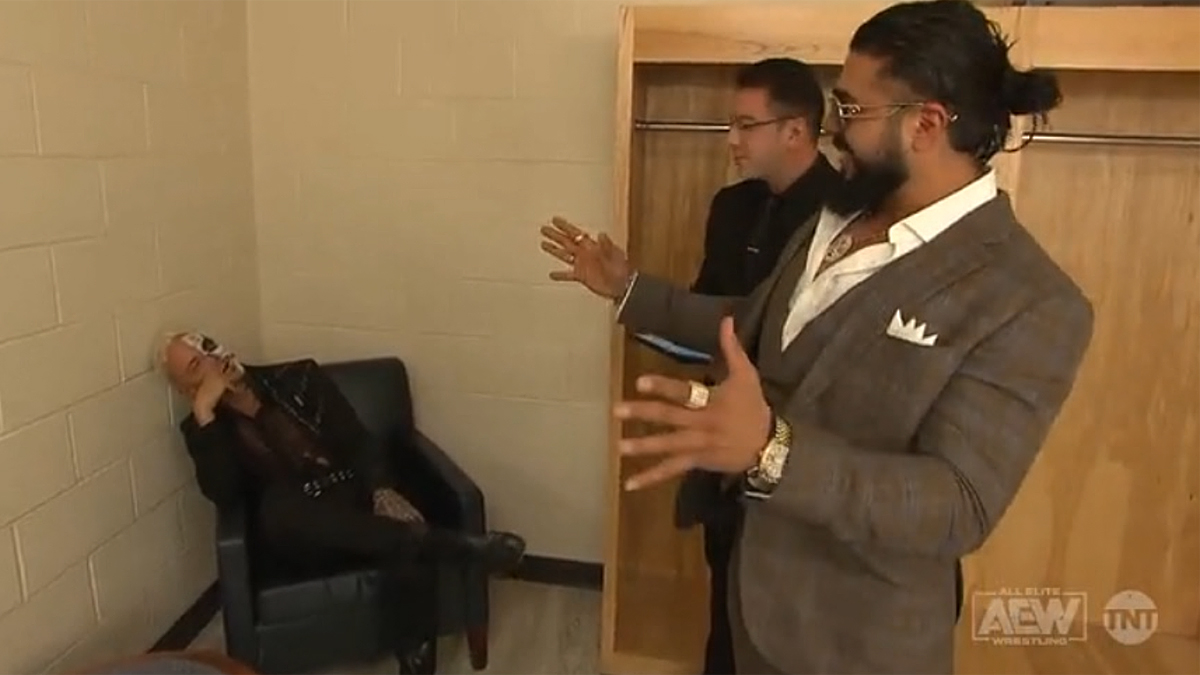 Andrade has an offer that Darby refused. Courtesy: AEW.

Andrade enters Sting’s dressing room. Darby Allin laughs and laughs as Andrade offers him a contract to work for him not Sting.

“You think I work for Sting? You have lost your mind,” says Allin telling Andrade that his dignity is not for sale.

Allin pulls out a baseball bat.

“Take it easy. Don’t get crazy. I need to talk to your boss,” says Andrade leaving the dressing room shaking his head.

Does anyone out there understand this angle at all? Why does Andrade think Allin works for Sting and why does he want to buy his services from Sting? Andrade’s Dime Store Million Dollar Man is not doing it for me any more.

Speaking of deals…here’s a classic from Pink Floyd off of their iconic Dark Side of the Moon album.

“Money, it’s a crime
Share it fairly but don’t take a slice of my pie
Money, so they say
Is the root of all evil today”

This match seems like it is on fast forward. It slows down when Dax and Brock tag in. The joke is that Dax and Brock wrestle like Arn. Brock clotheslines Dax down as Johnson tags in taking care of both FTR. He flattens them both on the floor one at a time. Brock slings Cash into a corner, Johnson kicks him in the head, Brock DDTs Cash, Johnson hits a splash from the top rope for a two count. Tully backs up into Arn on the floor. Arn socks him in the jaw. FTR wins with a spike piledriver on Johnson.

Thunder Rosa fires back at Mercedes Martinez and challenges her to a match on Rampage next week.

Did anyone think Hart was going to join the House of Black? It might be cool if she does turn on the Varsity Blondes. Jade mows down Hart with a shoulder tackle and a clumsy spinning backbreaker off the ropes. Jade is so unimpressed by Hart she takes some time to do a short workout of push-ups and sit-ups. Hart almost pins Cargill with a hurricanrana from Cargill’s shoulders. Cargill wins with Jaded. The announcers explain away Hart’s loss by saying she is wearing an eye patch and that hampered her.

Like I said, a one match show. Although the episode was entertaining, the winners and outcomes were all predictable. Let’s just hope that AEW isn’t turning Rampage into a throwaway match show as that will not go over well with anyone.