MLW Azteca: The Dynasty face down the Azteca Underground 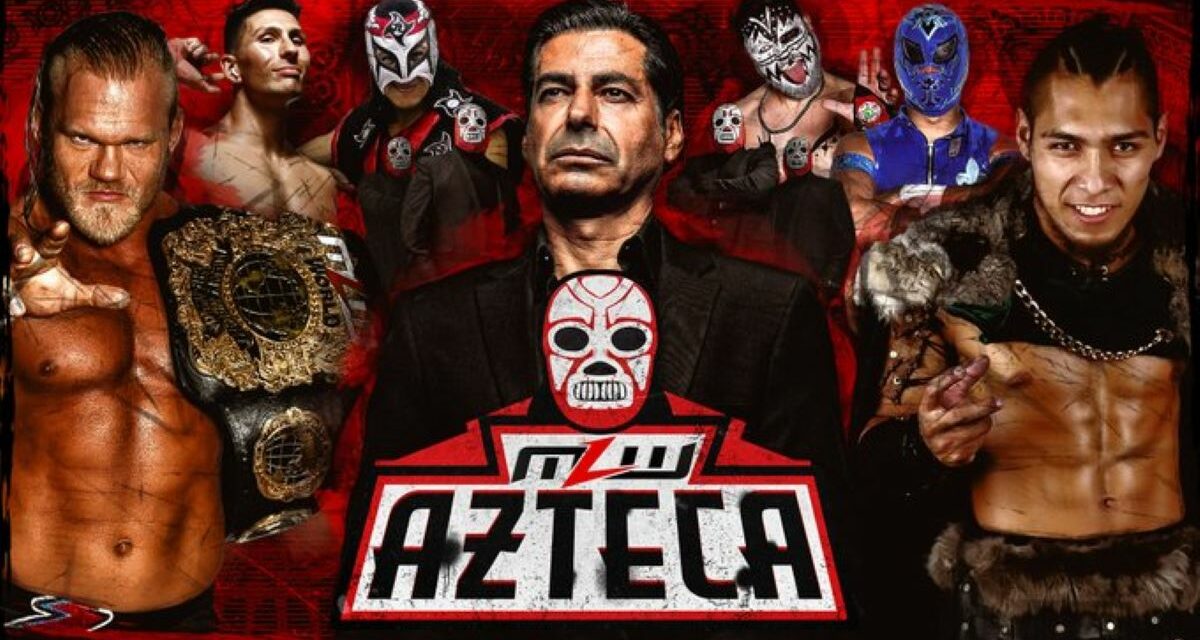 Ever had that one boss that made you job a living nightmare?  If you work in the WWE, you exactly what I’m talking about, am I right?

(Thank you.  I’m here all week.  Tip your editors handsomely)

But in all seriousness, the MLW Heavyweight Champion Hammerstone has had that experience ever since he got on the wrong side of El Jefe, Cesar Duran, and things aren’t looking any better.  Here’s hoping he does better in the title bout this evening.

We get a cold open that recaps The Dynasty versus the Azteca Underground, and how lately they’ve been on the losing side of things, as Duran has continuously stacked the deck every time.

Now let’s go ringside, as Rich Bocchini and Joe Dombrowski have the call at the Espada Fight Zone in Tijuana, Mexico, and we head to your First Match of the night…

Right away, the match is an emphasis of speed (Tigre) versus Strange Style (Arez), and Tigre gets the better of Arez early with quick pin attempts.  Tigre starts playing mind games with Arez, saying he’s *thiiis* close to beating him.  Well, that doesn’t sit well, as Arez gets back in control with a lumbar check.  It’s not enough as Tigre comes back with a submission that traps Arez’s arms, but he’s able to reach the ropes to break the hold.  Arez tries to get up the top rope, but Tigre Knocks him off.  The Gato Suicida launches himself with a plancha to the floor on Arez, and he continues the offense with a unique dragon screw leg whip to a Piledriver to cover for a two count.  Up top, Tigre goes for some high flying, but is caught by an Arez superkick on the way down. Afterwards, a double stomp and a Saharawi Suplex earn the victory for the Master of Strange Style.

Your Winner via Pinfall:  Arez

We go to the MLW Tag Team champs,5150 members Slice Boogie and Rivera, and they’re rolling dice (like ya do), and they state no one is taking the titles from them.  That’s the time when El Jefe steps in. Duran wants to talk about the future, and tell 5150 to get ready for Blood and Thunder facing the Von Erichs.   Rivera and Boogie are ready to smoke those fools

(Author’s Note:  Again, I understand that all this is pre-taped, and the Von Erichs’ medical status has been documented before.  So maybe this could be a good opportunity to, I dunno, state the card has changed, or write out the Von Erichs as a result of Duran having people disappear on a whim?  I realize I’m armchair booking, but still…)

A car drives, and the hourglass in the TV appears. Tick tock, anyone?

It’s now time for the next match, and it’s a big one in Mexico as it is for the…

This is a big opportunity for Aramis against the champ, and he wastes no time as the bell rings and delivers a running dropkick to Vikingo.  From there, it is a blur of offense by Vikingo, where the top spot has Vikingo jump from the top rope to the support beam, to a crossbody to Aramis on the floor!

Back in the ring, Vikingo hits a fireman’s slam to Aramis, and attempts a shooting star press, but Aramis gets his knees up to Vikingo’s sternum.  It’s all Aramis from there, as he goes to a sunset flip to Vikingo to a pick up the champ and ram Vikingo to a support beam, then to an Asai moonsault from the ring to the floor.  Aramis goes for the Desnucadora de Muscatero finisher, but Vikingo reverses to a pin for a two count.  Aramis goes back on the attack with an electric chair to a wheelbarrow to a facebuster to cover Vikingo for a two count.

Aramis nails a reverse brain buster, but still gets another two count.  At this point, the fans chant for Vikingo, as both men trade blows, and then chops.  Vikingo goes up top and hits a wicked crucifix driver, and Aramis returns the receipt, but can’t cover the champ.

All of a sudden, Arez comes with his briefcase of moneys and sends it to the ring.  As the ref puts it away, that’s enough time for him to get his rival Aramis the spinning lumbar check, and duck out.  Vikingo, unaware of what took place, hits the reverse 450 splash, and gets the win.

As Arez laughs at Aramis’ misfortune, Vikingo finally realizes what happened.  In a show of Sportsmanship, he raises Aramis’ hand in respect, to the crowd’s delight!

We get another installment to highlight EJ Nduka.  The Judge mentions he is married to his beautiful wife, Bethany, and has a newborn son, Exodus. He states that he learned from the best during his time in WWE Development. He makes sure to let us know in MLW, he is The Judge, jury, and executioner, and we are just getting started.

Here's another inside look at "The Judge" EJ Nduka.#MLWAzteca @EjTheJudge

That certainly got my attention at the end.

Bocchini states the next segment is sponsored (much to his chagrin) by Crybaby Calvin.  Alex Kane paid for the spot, and Bocchini reluctantly reads aloud, “Get this shirt now and don’t be a hoe like crybaby Calvin.”   I’m sorry, but that’s just too funny to hear.

Time for Mads Krügger with a propaganda video, wanting Jacob Fatu. I’m sure he says something more, but listening to him is like listening to that broken-down drive thru where it’s way too garbled.  Also, I want an order of fries with what Krügger is serving.

We then take it back to a few weeks ago, when Opera Cup winner Davey Richards got blindsided, and his cup was stolen.  There are no suspects, but they’ll follow the story as it develops.

Cesar Duran is on the phone, and Alex Kane and Mr. Thomas come in. the MLW Openweight champ says since Tankman is in jail, he needs challengers. Duran agrees and says he’s in a trios match next week. Kane ain’t feeling it, and doesn’t dig the flippy-flippy of luchadors.  He offers a proposal, but El Jefe blows him off.  Man, blowing off the head of the Bomaye Fight Club…that’s mas Chingon (Talk to your abuela to see what it means, and avoid the slippers flying at your head when you get the answer).

Here's the tale of the tape for our Main Event as @alexhammerstone defends his World Heavyweight Championship against @OctagonJrAAA!#MLWAzteca
▶️ https://t.co/0Aw1SYCPR0 pic.twitter.com/KrA0eroE1J

Of course, El Jefe is waiting in the wings as we go to the…

Cesar Duran comes out to get a front seat for the action at hand, and as Hammerstone comes out, his left arm is heavily braced due to the attacks by Pagano and others.  The champ is selling that his arm is still hurting.  Soon the fans are giving big cheers for the former Kalisto, as he comes to the ring decked in gold.  He pauses and gives the fist bump to Duran. Hmmm…methinks something is rotten in the state of Durango, Mexico.

As soon as the bell rings, Octagon goes right to work on the bad wing of Your Boy Hammer.  It’s all Octagon offense, as he gets the champ in a Tree of Woe to a sliding dropkick.  The champ responds with a big back body drop, but Hammerstone is still hurting, and that is a good time to go to…

Ads (yeah, you know how I feel about ads in the middle of the action.  So, let’s just head back and we go to…)

Outside the ring, where Your Boy Hammer is putting the hurt on Octagon, as he gives a gorilla press and has Octagon drop face first to the ring apron.

Soon, an army of Azteca Stooges ™ come out to watch from the ramp, and that gets Hammerstone distracted.  That’s enough for Octagon to go back to hurting the champ’s arm, and he follows it up with a running Meteora.   Second best spot of the night has Octagon get Hammerstone in position, and he goes into a headstand on the top turnbuckle, and drop to a modified Arabian Press to cover for a two count.

Hammer goes outside the ring, and Octagon follows up with an Asai Moonsault from the ring to the floor.  Back in the ring, Octagon goes up for a crossbody, but the champ manages to catch him and Your Boy Hammer uses his good arm to get some offense going.  Hammerstone delivers an overhead belly to belly suplex to cover for a two count.  Octagon answers back with a superkick, and he goes up top for the 450 splash.  Octagon covers for one, two…oh, so close for the former Kalisto.  The champ gets Octagon up on his shoulders, and goes for a spinning facebuster and he covers for one, two, and three.

Your Winner via Pinfall, and Still MLW Heavyweight Champion:  Hammerstone

After the match, Duran is incensed and orders the Azteca Stooges ™ to the ring.  Hammer sees them, and starts to fend them off.  Richard Holliday jumps into the ring to help his fellow Dynasty member, but the numbers game takes hold as the Stooges™ gang up on the game gringos, as the show fades to black.

This is probably the best of the MLW Azteca series from bell to bell.  If this is your first time seeing Hijo del Vikingo, you definitely need to follow his career.  Also, Octagon has found more life since getting future endeavored by WWE, and that was the best match ever.

Other than a few quibbles, this is a good balance of the wrestling and the entertainment.  I’m looking forward to next week’s show, as we see you in seven!