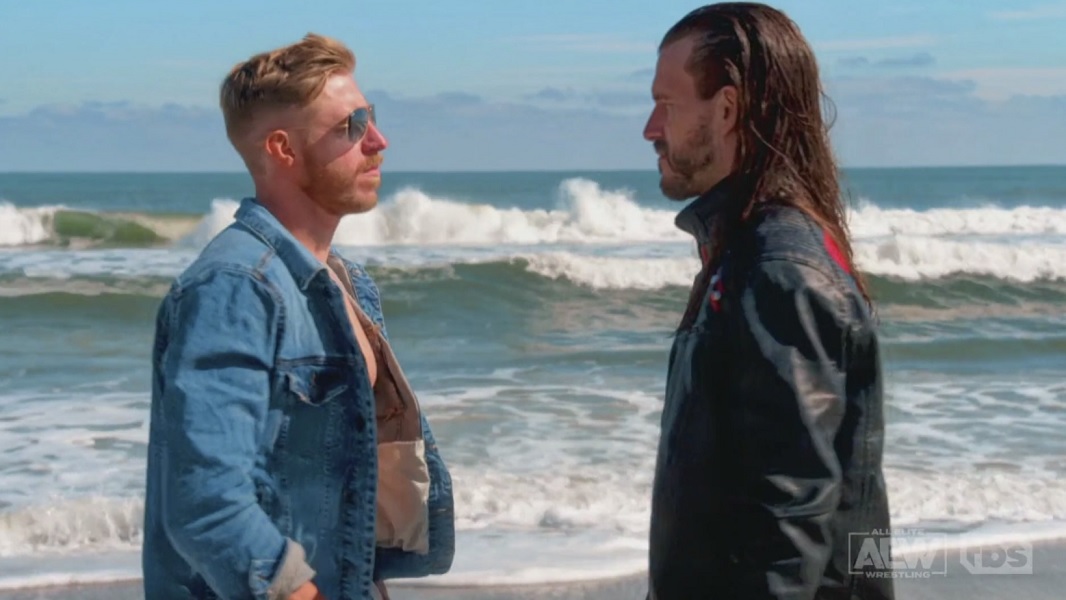 You know what doesn’t scream beach? January. Cleveland isn’t exactly synonymous with surf and sand to most people either, but AEW cares not. It’s putting on Beach Break at the coldest time of year in Cleveland, darn it, and you’re going to like it. You may actually like it, since there’s a big ladder match to start the show and an unsanctioned light out bout to close it, so let’s go live to TBS and embrace this winter AEW Dynamite Beach Break for all it’s worth.

Since Cody’s heel turn didn’t really take (because, well, he didn’t actually want to turn heel), it’s no surprise to see the two combatants shake hands before they get down to business. The announcers note that the belts look like they’re hanging about as high above the ring as they’ve ever seen them. A number of ladders are set up on the ramp, though Cody puts a quick halt to Sammy’s first effort at bringing one into play. A cool spot follows shortly after as Guevara hits a cutter over the barricade onto the concrete floor, and the camera show Scorpio Sky and Dan Lambert looking on as both men finally scale a ladder in the ring. Cody hits a big vertical suplex about two steps from the top of the ladder that kind of takes your breath away as it happens. Even with two ladders in the ring, there’s a lot of wrestling going on and not just nonstop ladder spots, which is both interesting and cool. It also makes the crazy stuff stand out more, like Guevara jumping off one ladder over the other and grabbing Rhodes in a cutter to the mat. There’s also a Cross Rhodes that starts with the wrestlers standing opposite each other about halfway up their respective ladders, which gives Cody a chance to climb on his own. Sammy recovers quickly and follows him up, and they end up hanging off the bar holding up the belts, though both of them drop in quick succession. With Rhodes in control on the outside, Fuego Del Sol runs down and gets in Rhodes’ face, though he’s quickly taken care of. Sammy hits the GTH on the outside, but that’s just a setup for Guevara to launch into a somersault plancha from atop a ladder onto Rhodes while he’s laying on a second ladder. That … looked painful. Naturally, the two men end up climbing a ladder simultaneously again, but this time Guevara is able to swing the belts into Rhodes to knock him to the mat one final time, and he grabs both titles to unify them after one hell of a match.

As proof that there is actually a beach in Cleveland, Tony Schiavone is out in the snow at Edgewater Beach to interview Team Taz. Powerhouse Hobbs wants a rematch with Dante Martin, while Ricky Starks says he’ll put the FTW Championship on the line against Jay Lethal on Rampage in Chicago.

It’s Cleveland’s favorite son, Wardlow, against two men making their AEW Dynamite debut. Welp. This is light work for Mr. Mayhem, who powerbombs these two chaps repeatedly and covers them both for the win.

Chris Jericho, Santana and Ortiz vs. Daniel Garcia and 2point0

There, everyone, I’m typing 2point0 the way they like it stylized. Hope you’re happy. The narrative here is about Santana and Ortiz chafing at the leadership of Jericho, and indeed, they aren’t able to stay united in the early going, with angry tag-ins aplenty. Jericho’s pleas for a hot tag later also go unheeded, so he drops off the apron to the floor in despair as Santana and Ortiz go two on three. He does assist with a Judas Effect to set up a piledriver for Santana that wins it, but Jericho can only smirk and point from the ramp. Cracks in the Inner Circle, indeed.

Hangman Adam Page seems a little surprised that his upcoming title bout with Lance Archer is a Texas Death Match, but he’s not fazed by it either. Sounds good to me.

Schiavone gets a word with Christian Cage on behalf of the tag team champions while Matt Hardy makes his case for a tag team title shot for Private Party. Jungle Boy calls Isiah Kassidy’s watch fake, but there will be a match between the two teams on Rampage.

CM Punk gets his usual warm reception as he heads to the ring for promo time, but his wrists are taped up like he’s ready to fight. He says the fans know who he wants to fight and encourages them to chant his name, for the first time ever, he quips. Punk also still has MJF’s scarf, and makes fun of both it and him. He’s skeptical that MJF will actually fight him tonight, and when the man himself comes out to the stage, he confirms that he has no plans to throw down in an “absolute cesspool” like Cleveland. Surprisingly, MJF agrees to face Punk next week in Chicago, claiming he’ll not only beat the Second City’s hero but also reveal the “real CM Punk,” the one who loses his smile as soon as he doesn’t get what he wants and isn’t afraid to sue. That’s a fun callout. MJF goes on to insinuate that Punk will leave wrestling again when he loses. That sets off a lengthy discourse about why the fans love Punk: It’s because when he falls, he always gets back up. A self-assured MJF offers to put that to the test, summoning the rest of the Pinnacle, who quickly overwhelm Punk so Shawn Spears can hit him with a chair. MJF orders Wardlow to powerbomb Punk, and while this might not be the moment for his turn, it would be cool. Not tonight, as Wardlow powerbombs Punk on a chair and MJF sits cross-legged on his chest.

The Acclaimed is OK with Jon Moxley being back, as they boast that Anthony Bowens will beat his ass on Rampage. Something tells me that isn’t going to go the way they hope.

Even though her eye is still messed up, Julia Hart is getting a shot at Jade Cargill and her championship. I agree with Griff Garrison: This seems like a bad idea in her current condition.

The issues between these tow have been simmering for a while, and there’s some extra heat now that they occupy the top two spots in the women’s rankings. Funny how that seems to happen between two wrestlers who are feuding, eh? Hirsch eventually wins this encounter, a small upset according to those rankings, but only by cheating to do so.

Hirsch tries dishing out some more punishment after the bell, causing Kris Statlander to rush to the rescue and Jim Ross to make a humorous comment about the “invisible wall” that seems to keep people from pursuing their enemies past the beginning of the ramp. He’s not wrong!

The House of Black cuts an atmospheric promo threatening to make Pac and Death Triangle to feel true pain. Just like death, we are inevitable, they claim. Don’t you mean Thanos, chaps?

Ever the good pal, Schiavone calls Dr. Britt Baker, D.M.D. out to celebrate her recognition by Pro Wrestling Illustrated, as well as giving her a chance to taunt the Cleveland fans with a Terrible Towel. She takes some shots at Baker Mayfield and brags about her accomplishments and the way she’s made the division her own.

When Baker wraps her bit, Nyla Rose makes a brief appearance to announce that she wants a match with Ruby Soho. Duly noted.

While it’s great to see even the usually lethargic Cassidy just rush in and start throwing hands with Cole, things get really interesting when Cole goes under the ring and tries to grab a chair only to find it unusually difficult to drag out. There’s a good reason for that: It’s being held by someone very nice, very evil: Danhausen! That’s the way to make a memorable debut. Mass chaos breaks out after a commercial break as the Young Bucks and Best Friends try to intervene, with the Bucks eventually being neutralized by Roppongi Vice. Cassidy lands the Orange Punch, but he’s taken a lot of damage to his right hand throughout the bout and sells it. Cole tries for a low blow, but Cassidy is prepared with a thumbtack-studded cup. Have to make sure you’re wearing that the right way. Cassidy connects with a Panama Sunrise, but Cole kicks out at two. Undeterred, Cassidy wraps a metal chain around his right fist, and Cole wants none of that and heads for the tunnel. They battle backstage, where Cole hits a DVD through a table and covers for a near fall. After battling to the top of some scaffolding, Cassidy gives Cole a taste of his own medicine with a low blow. They hug, though Cole is an unwilling participant, and Cassidy drops both of them through a wooden platform, where he has just enough strength left to cover for three. Hard not to smile after watching that.

Don’t miss Rampage on Friday, then the AEW train heads for Chicago next week. See you in seven!

When the opener and main event are of the highest quality, does the rest of the show really matter that much? I submit that it does not. Both of the gimmick matches were excellent, so the fact that things dragged a little in the middle was really no big deal. Another excellent themed Dynamite, as AEW often produces, and plenty of threads to take some momentum into next week’s Chicago shows. Also, Danhausen!