NWA POWERRRSurge: Time for The Fixers Follies and ferocity 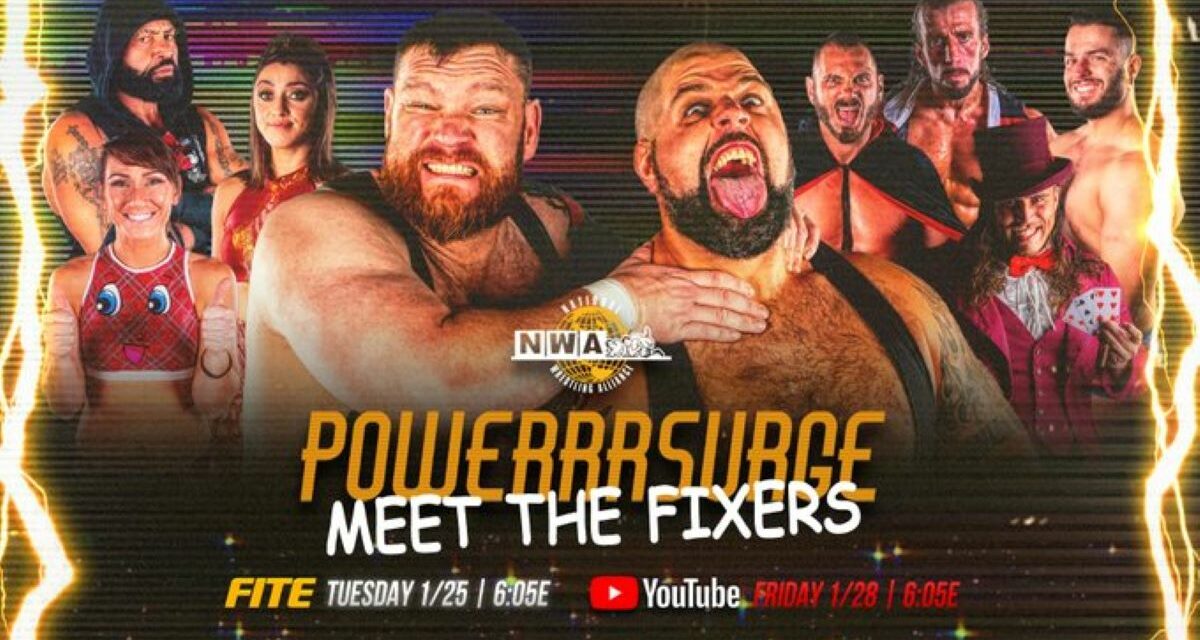 Welcome to another Tuesday at the National Wrestling Alliance, and we step into … The Fixers?  Looks like the newest Tag team in the NWA is taking control on this special POWERRRSurge.  I invoke the words of Jimmy Martin, as I say, “Show me what ya got!”

As we go to a cold open, “The Boss” Jay Bradley, alongside “WB” Wrecking Ball Legurtsky welcome fans to Meet The Fixers.  Bradley says they can fix anyone, anywhere, anytime. If you’re new to the NWA, the best way to describe The Fixers is that they’re like the APA, only…not.

But they are entertaining, so let’s move on to the First Match…

It’s the Red Dog in his first NWA match, and as we’re joined by Joe Galli, Austin Idol, and Velvet Sky, Idol channels hip hop group Baha Men by asking, “Who let the dogs out?” I have to agree with Sky, that was so predictable.

Now, I know this is a squash match, but I ain’t gonna disrespect Mack with a Squash recipe.  After how he manhandled Jax Dane, I’m letting this dog lie. But, let’s face it, the match is one-sided, as Mack works over Graves, and gets him in the Euthanizer (Cobra Clutch) to end this match.

We go back with the Fixers, with some more Fixer Facts ™:  Bradley is from Chicago, and Legurtsky is from Pittsburgh. They talk their favorite wrestlers (Dick The Bruiser, Bruiser Brody) and favorite foods (and Legurtsky apparently has never met a meal he never liked).

Bradley talks about how he and Legurtsky saw a guy bumming for bus fare, and they realized…they’re not gonna give him anything, because they’re not the Salvation Army.

Ha!  Comedy!  Get them a Netflix special.

They throw it to the junior heavyweights, and offer a special showing of Austin Aries versus Rhett Titus from Hard Times 2.  Since I don’t recap recaps, I offer you all the opportunity to check out the Hard Times 2 recap I did the other day.

And now for something female, let’s give you… 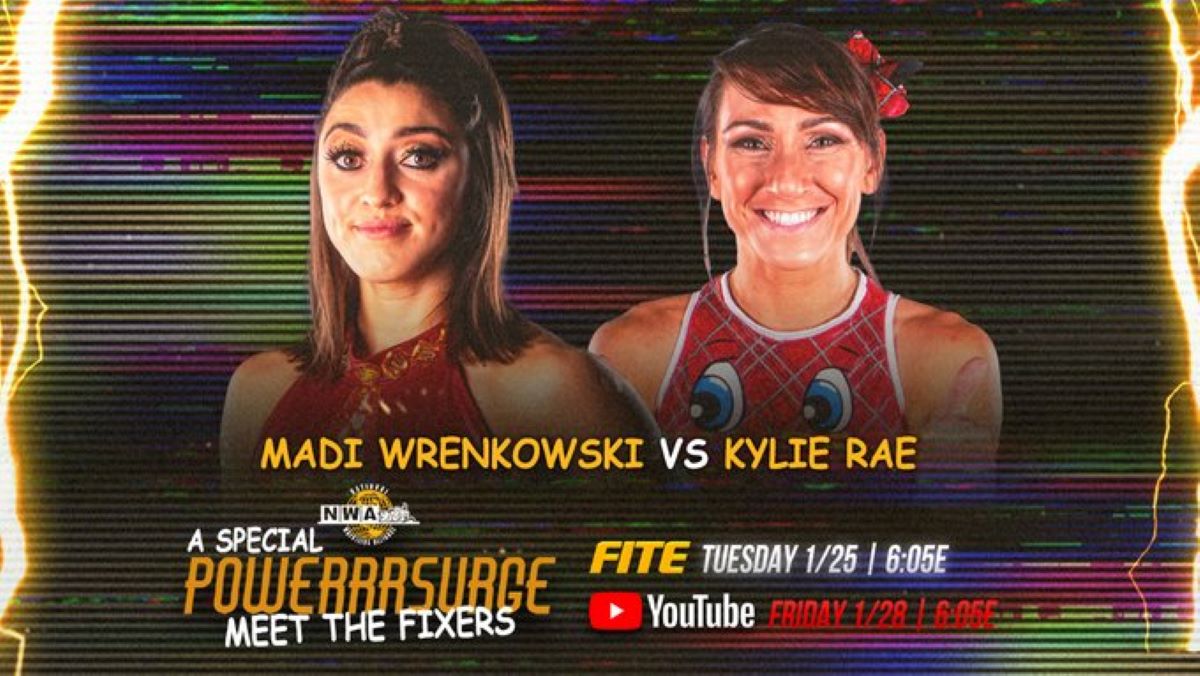 The match is all Wrenkowski, and she gets Rae in a camel clutch, and cinches it in deep, but Kylie fights out.  Madi focuses her offense on hurting her back, and even gets her in a dragon sleeper between the ropes to further damage Rae’s spine.  Wrenkowski keeps up the attack with multiple pins, but Kylie keeps kicking out.  But soon, “Smiley” Kylie starts getting her second wind, and she gets Wrenkowski with a basement superkick.  She gets Rae in a Facebuster with some elevation, and covers for one, two…just barely kicks out.  Wrenkowski goes for her Reality Check finisher, but Kylie twists her into a crossface and Madi has no choice but to submit.

Your Winner via Submission:  Kylie Rae

Back to The Fixers, and they are filmed… in phenomenal 4K. So you can see every chest hair in high definition.  Bradley talks about working Wrigley Field in Chicago, and seeing a woman walking a goat, and he’s all “You cursed to be with your boyfriend.”

Again, comedy gold, I tells ya.

(Or the Oaxaca Old Fashioned has turned the bend in my medulla oblongata, and things are going downhill from there…)

But the best part?  You can see The Fixers in the Main Event that is finally here, as we get… 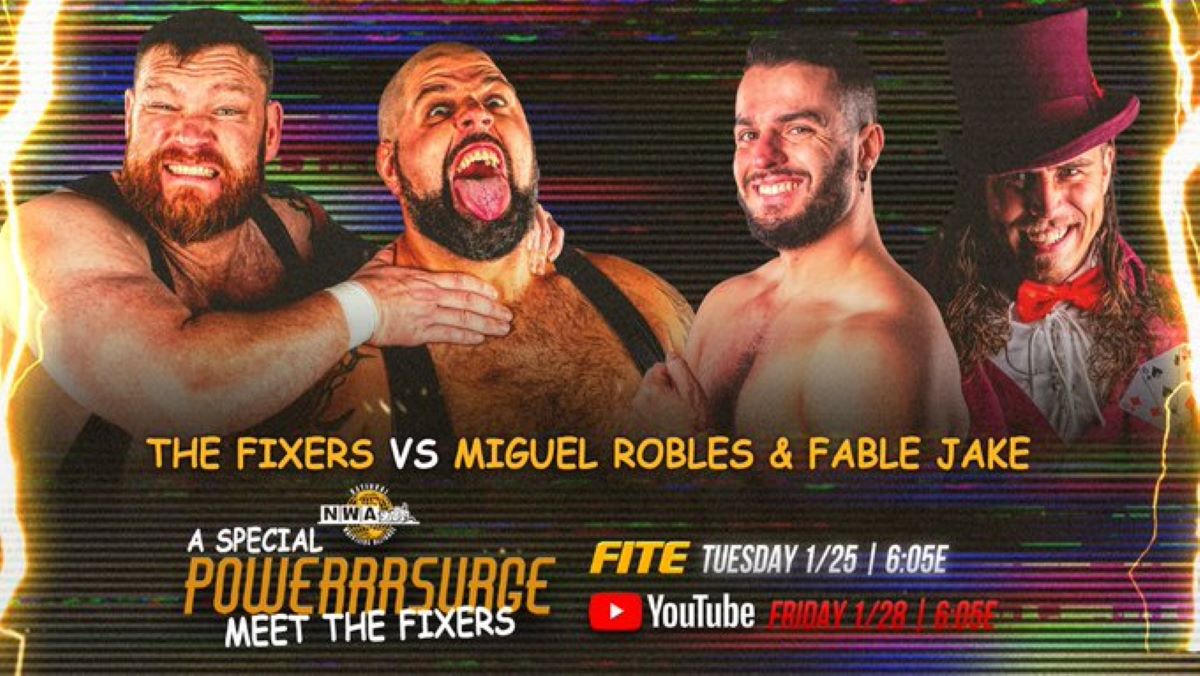 The Fixers vs Miguel Robles/Fable Jake

Again, this is a Squash match, but I’ll be kind (or I’m lazy because of the drink.  Take yer pick), and I won’t do a Squash recipe.  I will state that this match happened, much to the expense of Robles and Jake.  Simply put, The Fixers waste no time working the challengers, and the finish had Bradley land a big boot to Jake, followed closely by a cannonball from the Wrecking Ball, and the Fix is in, as Legurtsky pins with the one, two, and three.

The Fixers celebrate, as the show goes to credits (showing they did everything, with special thanks to “Mr. Colby Corino”)

OK.  This show is just dumb fun.  Just keep the expectations low, and it’s fine.  The Fixers have some comedic chops (even though it wanders into “Dad Jokes” variety, but it still works).

I do like how NWA varies the POWERRRSurge formula, and I’m curious what this leads from here.  If anything, if The Fixers get a Netflix special, I will be jealous.

Until then, See you in Seven!