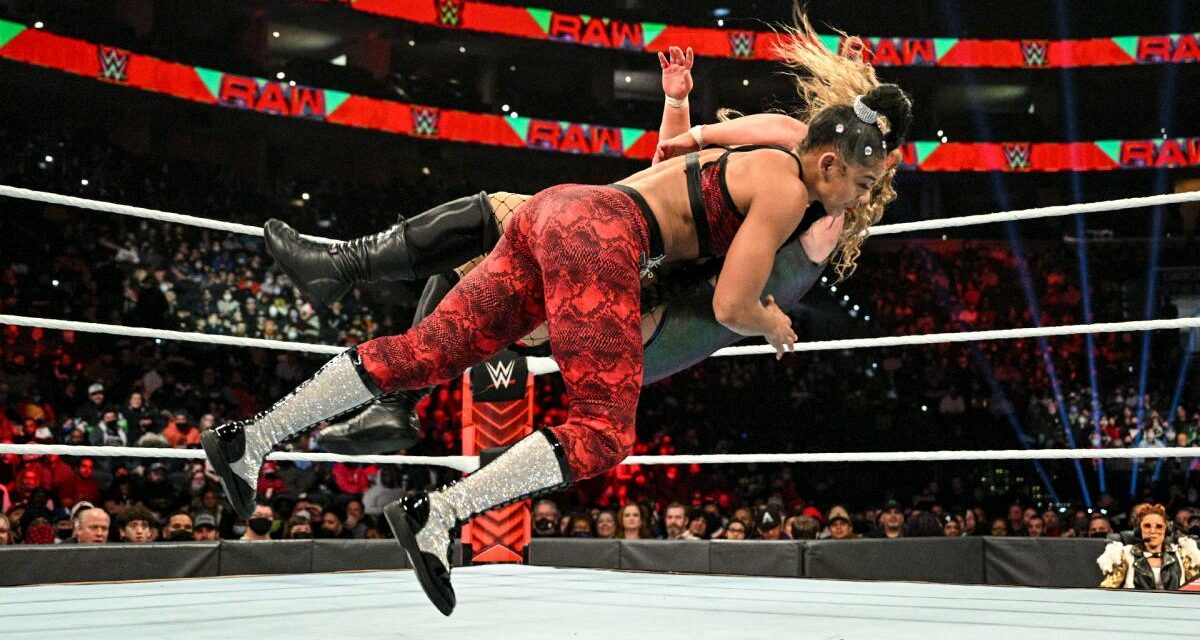 WWE has once again sent out word what we can expect on tonight’s Monday Night RAW. RK-Bro will defend their tag team title against the Alpha Academy, we will see a triple threat match for the number one contender to the RAW Women’s title and Seth Rollins will make an appearance to talk about challenging Roman Reigns. I’m guessing we will also see some sort of confrontation between Brock Lesnar and Bobby Lashley. Onto the show.

Your WWE World Champion, Brock Lesnar, kicks off the show with the advocate Paul Heyman at his side. Backstage, Lashley is watching on the monitors when he is approached by Cedric Alexander and Shelton Benjamin. They are quite excited that the Hurt Business is back together, but Lashley never got that memo. The All Mighty works alone and shuts down any talk of the Hurt Business and tells them to get lost.

The All Mighty then takes his business to the ring to confront the champion. Lashley flat out accuses Brock of ducking him for 20 years. Brock apologizes that for the last 20 years he has been winning titles in this ring and other rings. He didn’t know who he even was until Day 1. Brock would have all ready beaten him if they had met sooner. Brock calls him a Brock Lesnar wannabe. He drops the mic and walks off.

As Lashley watches Brock, Alexander and Benjamin jump the All Mighty. Bobby dispatches both men. He slams both men into the ring post.

Before their match, Riddle is trying to ascend to a higher plain. Orton wants him to concentrate, they lost week because Riddle didn’t tag him in. Orton writes a note on Riddle’s hand in case he gets lost in the match. TAG IN RANDY. After the match, Riddle wants to go out for cheesesteaks.

Riddle and Chad Gable trade holds to start the match with each man breaking a hold with a rope break. Gable with a straight shot to the mouth. Gable is knocked to the floor and Riddle hits a moonsault off the apron.  In the ring, Gable catches a kick and hits a dragon screw. Otis tags in, steamrolling Riddle. Riddle lands on his feet after a suplex. A floating bro takes down Otis. Orton gets the tag, as well as Gable. Orton with a series of clothesline and then takes a shot at Otis. After a snap body slam, Orton looks for the draping DDT. Otis breaks it up and Gable goes up top. Orton crotches him on the turnbuckle and hits a superplex. Riddle gets the crowd fired up as Orton wants the RKO. Otis takes a swipe at Orton and then takes out Riddle on the outside. Otis makes a blind tag. Orton looks for the RKO, but Gable blocks it and shoves Orton into a falling slam. Otis covers and gets the win.

Damien Priest announces that he is entering the Royal Rumble.

Priest is happy the Street Profits have his back against the Dirty Dogs. Angelo Dawkins wants to know what side of Priest are then dealing with. Ford wants to know if he is going to partake in the party.

Bianca Belair is ready to win tonight and takes the title off of Becky Lynch. She is going to walk into WrestleMania as champion this year.

Damien Priest sends Crews to the floor. Priest wants a power bomb, but Azeez intervenes and Crews kicks Damien in the head. Montez Ford flies over the ropes to take out everyone, but this leaves Angelo Dawkins all alone. Dawkins with the Anointment to Roode, but Ziggler had made the tag. Dolph hits the Zig Zag and covers to get the pin.

Seth Rollins is in great mood because the Royal Rumble is on the horizon. He is so excited because on that night he will become the Universal Champion. He’s awfully confident because only three things in life are certain; death, taxes and Seth Rollins beating Roman Reigns.

Big E is thrilled for Seth. Of all the title combatants at the Rumble, Seth is his favorite. Big E is in the Royal Rumble and his biggest dream is to beat Seth at WrestleMania and walk out a champion. Rollins says he can’t be beat. Big E wants to test that theory, tonight.

A drop kicks staggers E. Rollins tosses him to the floor and flues through the ropes to wipe E out. Big E catches Seth attempting that again. He splash Rollins on the apron. After an early commercial break, Rollins hits a flying knee from the top rope. Rollins applies a chin lock, trying to wear down Big E. Rollins chops away at the chest, but runs into a uranage. Big E drops Rollins on the apron and then spears him through the ropes to the floor.

After a second commercial break, Big E slams Seth to the mat and splashes him. Rollins floats over the Big Ending. A rolling elbow staggers E. Rollins can’t pick him up though. Rollins connects on a enziguri and follows with a super kick. Seth goes up top, connecting on the frog splash. Big E counters a running knee strike with a powerbomb. Big E looks for the spear, but Rollins blocks it with a knee. Big E stops Rollins on the turnbuckle and looks for the Big Ending. Rollins fights out. On the mat, Seth looks for the Pedigree, but Big E powers out. Rollins with an elbow strike and follows with the stomp. Rollins flips Big E over and covers to get the three count.

A bunch of women are announced for the Royal Rumble; the big news is that Mickie James now of Impact Wrestling will be competing.

Nikki A.S.H. and Rhea Ripley are in the ring to make an announcement. Nikki tells Sarah Schreiber that they are challenging the tag tea champs to a rematch. Rhea says that isn’t it. Ripley doesn’t want to do this now, but Nikki wants to talk. Rhea wants them to go their separate ways. Rhea tells her that it’s not about the titles. Nikki has some insecurities and is projecting them. Nikki claims that she is better in the ring. Ripley doesn’t like where this is heading and starts to leave. Rhea wants to say good bye and offers a hand shake. Nikki wants her to look her in the eye and say she still believes in her. Rhea hopes Nikki doesn’t stop believe in herself and wants to stay friends. The two hug it out. Rhea wants a fist bump. Nikki jumps her instead, beating Ripley into the mat.

Reggie brings Dana Brooke a cheese steak, but there is trouble afoot. The 24/7 title is in danger. They nearly get ambushed by R Truth and Akira Tozawa. While Tamina takes a cheese steak to the face. Reggie literally runs into Omos, who picks him. Dana yells at Omos to put Reggie down. Omos tells Reggie to watch what he is going to do tonight, because next week is going to be worse.

Doudrop tells us why she is going to win tonight.

JOBBER ALERT! We have a jobber alert! Omos dispatches of this jobber with ease. He gets the pin after the elevated choke slam. Reggie and Dana Brooke look on from the back.

Edge welcomes his wife, Beth Phoenix, to the show. He gives her one heck of an introduction. Edge wants us to remember how much Beth dominated in the ring. They are the only couple in the WWE Hall of Fame. He rolls video to back up his claims. Edge gives Beth the floor. She’s here to talk business. The Miz has to stop and at the Royal Rumble they will shut him and Maryse up.

Maryse and Miz walk out on stage. Nothing really new is said, as Miz claims Edge is using his wife to fight his battles. It’s the same promo every week. Miz has his own highlight video of Maryse. Edge respects Maryse, but Beth can deadlift a Buick. She smashes people. Beth calls out Maryse for interfering when she wasn’t around. Beth promises to wreck Maryse at the Rumble. Miz wants Maryse to answer back, but Maryse walks off stage. Miz has no idea until he turns around and she is gone.

Austin Theory tells Kevin Patrick that tonight he has a chance to impress Mr. McMahon. Theory vows to beat AJ Styles tonight and Mr. McMahon will have no choice but to invest in Austin Theory.

Theory and Styles go back and forth. Theory with an Ushigoroshi, but only gets a two count. AJ fights his way to the apron, looking for the Phenomenal forearm. Styles is yanked off the apron and beaten by Grayson Waller. The ref calls for the bell.

Theory gets a selfie before Styles can recover. AJ gets to his feet and takes the fight to Waller. Grayson is able to escape.

Liv Morgan won’t quit and has the same attitude that got her a title match.

Remember how last week we were told Alexa Bliss was coming back tonight? Yea, technically she’s back. She’s in therapy and we get to watch. She destroys the office after threatening the doctor.

Becky Lynch stands in the ring before the triple threat match. She cuts the basic promo on all three women competing in the match. They are all fighting for a chance to lose to her.

Becky joins the commentary team. Doudrop slams Liv face first onto Bianca, but isn’t able to get the pin. Morgan rolls away from a cannonball but can’t over power Doudrop in the corner. Morgan is dumped over the top rope to the floor. Belair eats a head butt from Doudrop. She misses on a spear in the corner. Belair goes up top, only for Morgan to yank her to the mat with a hurricanrana . She then nearly gets a roll up on Doudrop. Morgan and Belair throw hands in the middle of the ring. Liv applies the Rings of Saturn. Belair is able to power out of the hold, lifting Morgan off the mat. Morgan counters by getting her knees up. She lays out Doudrop and sends Belair into the turnbuckles. Liv sets Bianca up, but Doudrop wrecks those plans. She power bombs Liv and covers. Bianca with a 450 splash to break the pin. Bianca can’t get a pin on either woman. Bianca with a spine buster to Belair and slams Morgan on top of her. She picks up Liv and hits the KOD. Becky Lynch runs in to break up the pin. Belair goes after Lynch, but gets thrown over the announce table. In the ring, Doudrop drags Morgan to the corner. Doudrop with  a sit down splash from the middle turnbuckle. She covers and gets the pin.

After the match, Becky goes for a handshake and then slaps Doudrop. Lynch wants to slam her, but Doudrop is able to shove her out of the ring. That’s the show.

WWE put on a solid episode of Monday Night RAW. There were surprises; a title change and a heel turn. There were solid matches; Big E vs. Seth Rollins and the triple threat between Bianca Belair, Liv Morgan and Doudrop. It wasn’t all good, though. The return of Alexa Bliss was a pre-taped segment of her getting therapy and then scaring off the doctor. Miz cut a promo on Edge where he didn’t say anything new.