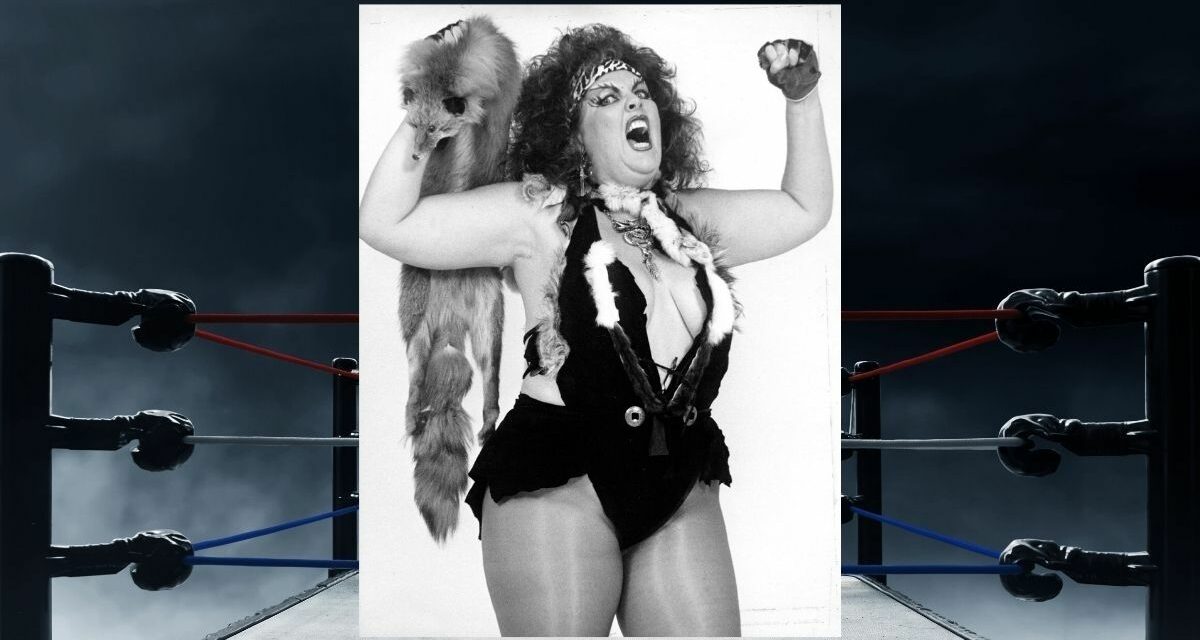 Deanna “Dee” Booher, who wrestled as Matilda the Hun and Queen Kong in GLOW and POWW, and who appeared in numerous TV shows and movies, died on January 7, 2022. She was 73.

Also known as “Queenie” and “Queen Adrena,” she actually came out of the roller derby world before getting into pro wrestling.

Born August 6, 1948, in Los Angeles, California, Booher skated for five years with roller derby teams such as the Chicago Hawks, the New York Bombers, the Detroit Devils and the Texas Outlaws.

A natural entertainer, she even released a rock song, “(I Eat) Raw Meat,” which got some play in Los Angeles and the video got some attention too. You can find her in the Aerosmith video for “Love in an Elevator” too, with a little person on her shoulder.

Before ever getting into pro wrestling, Booher had been on TV shows such as Win, Lose or Draw and The Gong Show.

According to her IMDB biography, “She also made a living delivering very physical singing telegrams known as ‘Slam-A-Grams’, where she would take down the victim, errr, guest of honor at a party in various professional wrestling moves, all designed to look extremely painful and brutal, but ultimately harmless.”

She had dabbled in pro wrestling in the 1970s, before the cast call for Gorgeous Ladies Of Wrestling went out. You can see her in Grunt! The Wrestling Movie.

In a 1983 interview with John Cunningham in the UK-based Guardian, Booher said that “I know how to play the heart strings … It’s always the babyface and the heel. I can play either one, though I usually play the heel. I play the brutish, nasty, spoiled, egotistical bully. The audience love to boo me. But inside the heel I like to be dramatic and sexy. I love to be spoiled. I love to be a bitch.”

Booher didn’t shy away from the racier side, and for a time, operated a sex chat line — perhaps the first — and did mud wrestling and wrestled topless.

“Am I being sexually exploited if my breasts fall out in the mud, or if I do a layout in a magazine? I’m not manipulated by anyone except myself,” she told the Guardian. “I don’t believe that women’s problems are due to men overpowering them, because women have to be responsible for themselves.”

Matt Cimber was the man who produced GLOW, and in a 2017 interview, said that Booher’s character, Matilda the Hun (taken from the Death Race 2000 flick) was “one of the great villains of all time.” The character was out there, fierce and fiery, wearing leopard-print and lace, Booher was also physically bigger than most of the other GLOW girls.

In a 2018 interview with Sara Nathan in the New York Post, Booher said that she had a chance to add to her income while in GLOW, but was denied. “[GLOW producers] wouldn’t allow me . . . I was offered a $1 million beer commercial and shows that would [have] set me up for life, but they said, ‘We own you,'” said Booher. “I had a child and a husband who counted on me.”

After the initial 1986 season, Booher quit GLOW and jumped to the other all-women’s promotion, Powerful Women of Wrestling.

There was always more work on TV, and she appeared on shows such as Mama’s Family and Night Court, and is in the Mel Brooks classic Spaceballs as a bearded lady. 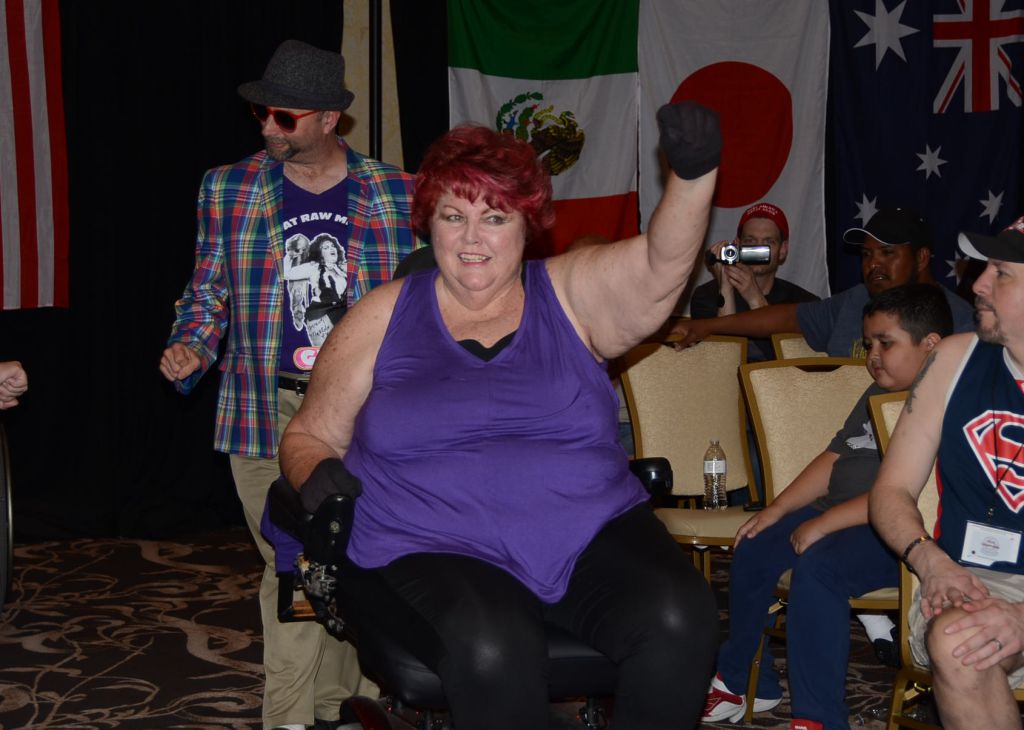 Matilda the Hun at the 2017 Cauliflower Alley Club. Photo by Brad McFarlin

In the Post interview, Booher said that her ailments were due to wrestling. At the time, she was 66 and living in a senior-citizens community near Long Beach, Calif., using a wheelchair. Lupus and peripheral neuropathy were two of her issues, and two toes had been amputated. “All my nerves are dying in my fingers and toes and no one can tell me why,” she said. “I have a lot of health issues from GLOW, from lifting and slamming six days a week. The lifestyle of a wrestler, male or female, is brutal.”

Like the other GLOW girls, Booher was swept up in recent years through a 2012 documentary about the show, and a Netflix show loosely based on the promotion. Booher, in her mobile scooter, was among the GLOW girls presented with an award at the 2017 Cauliflower Alley Club reunion.

Active on social media, with a website, Booher kept fans informed of her triumphs and health challenges.