AEW Battle of the Belts: Champs stand strong in Charlotte 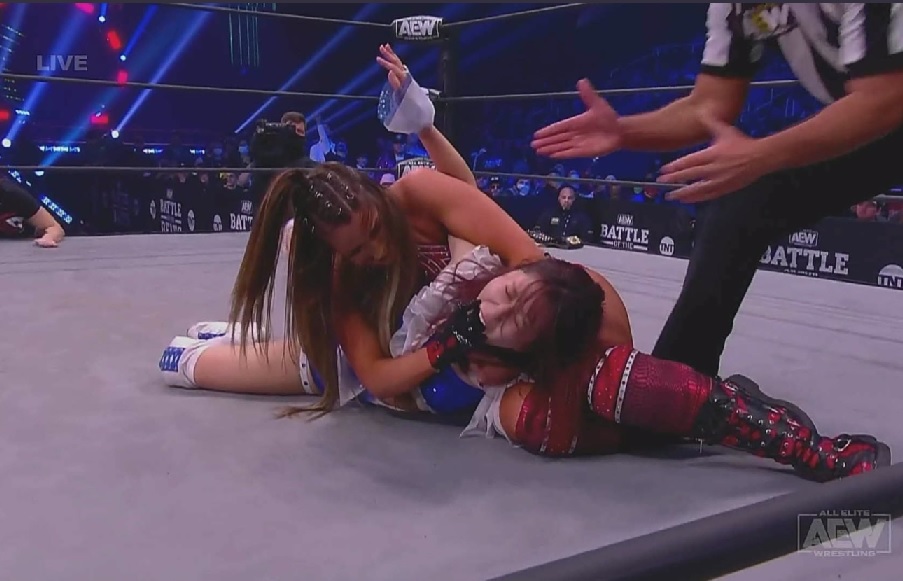 It’s Saturday night, and you know what that means! OK, usually it doesn’t mean AEW, but the promotion is going to do quarterly Saturday specials in 2022, and the first one is hitting early in the year. The show is only an hour and the idea is all the matches will be title matches, though one on this card has already had a twist: Cody Rhodes isn’t cleared to defend his TNT Championship, so his brother is stepping in to take on Sammy Guevara for the interim title. This should go by quickly, so let’s not waste time: We’re going live from Bojangles Coliseum in Charlotte on TNT.

Despite the absence of Cody, the announcers do their best to build a storyline around this meeting, reminding us that Dustin and Sammy have split two previous meetings. NASCAR personality Humpy Wheeler is in the crowd, and Charlotte area icon David Crockett is on hand to award the interim belt (a first for AEW) to the winner. Rhodes makes a concerted effort to slow the pace, which isn’t a bad idea, and even though Guevara takes to the air for some typically impressive stuff, he’s also selling damage to one leg to make it more interesting. With both men kicking out of each other’s finishers, the “What will it take to win?” deal is in full effect, leading to Fuego del Sol setting a table up on the floor and Arn chasing him to the back. That table is still there, though, and Rhodes uses a Canadian Destroyer to drive Guevara through the table. Please read that last sentence again. Good gravy. It’s not enough to finish this, which ends up costing The Natural as Sammy is able to persevere and pin him a few minutes later. That’s the right outcome here, but Rhodes filling in was definitely worthwhile.

Not long after he has his hand raised Guevara is confronted by Daniel Garcia. Their staredown leads to shots exchanged, and a phalanx of refs has to hustle out to pull the two men apart.

Tony Schiavone gets a word with Guevara, who says the TNT belt has always been about open challenges, so he’s more than willing to put it on the line against Garcia this coming week on Dynamite.

Tazz joins the crew at the announce table, giving a very brief overview into what the FTW strap represents. Uh, not by mentioning what the first letter originally stood for, because he can’t say that on live TV. Powerhouse Hobbs is ringside, and could always figure into this if Starks is in trouble. He arguably is as the match goes on past a commercial break, with Sydal getting in a lot more offense than he often does on TV. Starks narrowly avoids two straight pinning attempts and hits the Roshambo to retain his title.

An angry Starks is joined by Hobbs to lay some boots to Sydal after the bell, and Lee Moriarity is little help coming to his aid. Dante Martin fares much better, even standing tall against Hobbs. “Wait until Wednesday,” Tazz implores Hobbs.

I enjoy the build for this, where even a dominant champ like Baker might have one challenger she needs to defeat before she can truly be who she claims to be. The other subplot is that Baker has Rebel and Jamie Hayter riding shotgun for her, but in a mini version of what’s going on with MJF and Wardlow, Hayter is showing at least the start of chafing in her role as the muscle. She does help Baker get out a table, but immediately regrets it as Riho runs up the table and dropkicks her stiffly in the face. Baker controls most of the action in the ring, though, until Riho is able to slow her with a submission hold. The crowd seems pretty split, with chants for both wrestlers. Riho wants to do a double foot stomp off the top turnbuckle, and hits Rebel with it when she shields Baker with her own body on the apron. It does buy Baker time to recover, however, and Hayter hands the champ her glove to prepare for the Lockjaw. Riho battles to reach the ropes, then nearly pins Britt out of nowhere. Baker’s Stomp nearly returns the favor, with Riho barely kicking out before three. Drama among Baker’s entourage provides Riho with an opening to hit a crucifix bomb for a near fall, and the two women go back and forth with more close calls. Baker eventually maneuvers Riho into the Lockjaw, and Riho quickly taps out.

Ah, maybe the beef is really between Rebel and Hayter, as they squabble about who gets to hand Baker her belt. But that’s a story for another day, as we’re done here for tonight. See you in … uh, 90 days or thereabouts, but only four days until Dynamite!

There’s always a question of how much is too much, and with AEW now at two weekly shows, it probably doesn’t want too much additional product on the air on a regular basis. That said, quarterly cards focused on title matches sounded like a fine idea, and the first Battle of the Belts was enough to convince me it’s worth doing. Good matches and a minimum of filler works for me, and I imagine for plenty of other fans as well.