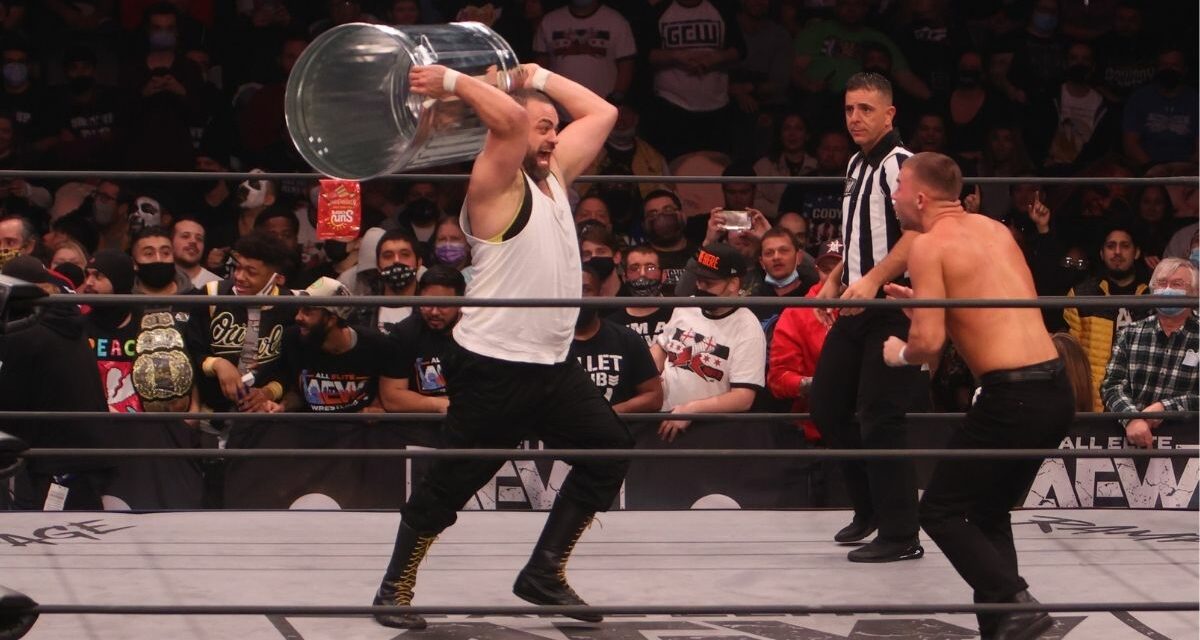 They sent Hook, but even he wasn’t enough to save Friday night’s episode of Rampage. His match against Aaron Solo was one of the sole highlights of the show. The other being a very good match between Adam Cole and Jake Atlas – making his TV debut for the company – was good until the good times were marred by a real injury to Atlas that hopefully isn’t too serious and won’t derail him for too long.

The main event street fight, on the other hand, was bloated and messy, and in some ways felt like a chore to watch, despite the talent involved. Worse, it ultimately felt like a mere throwaway, its only purpose to set up a future match between Eddie Kingston and Chris Jericho, who inserted himself into the post-match shenanigans after yelling on commentary all night.

But, Hook was good.

Adam Cole, it was announced, is the number one contender based on the most recent rankings.

The match started off with some solid technical wrestling and some nifty-looking gymnastics, with Jake getting the edge. 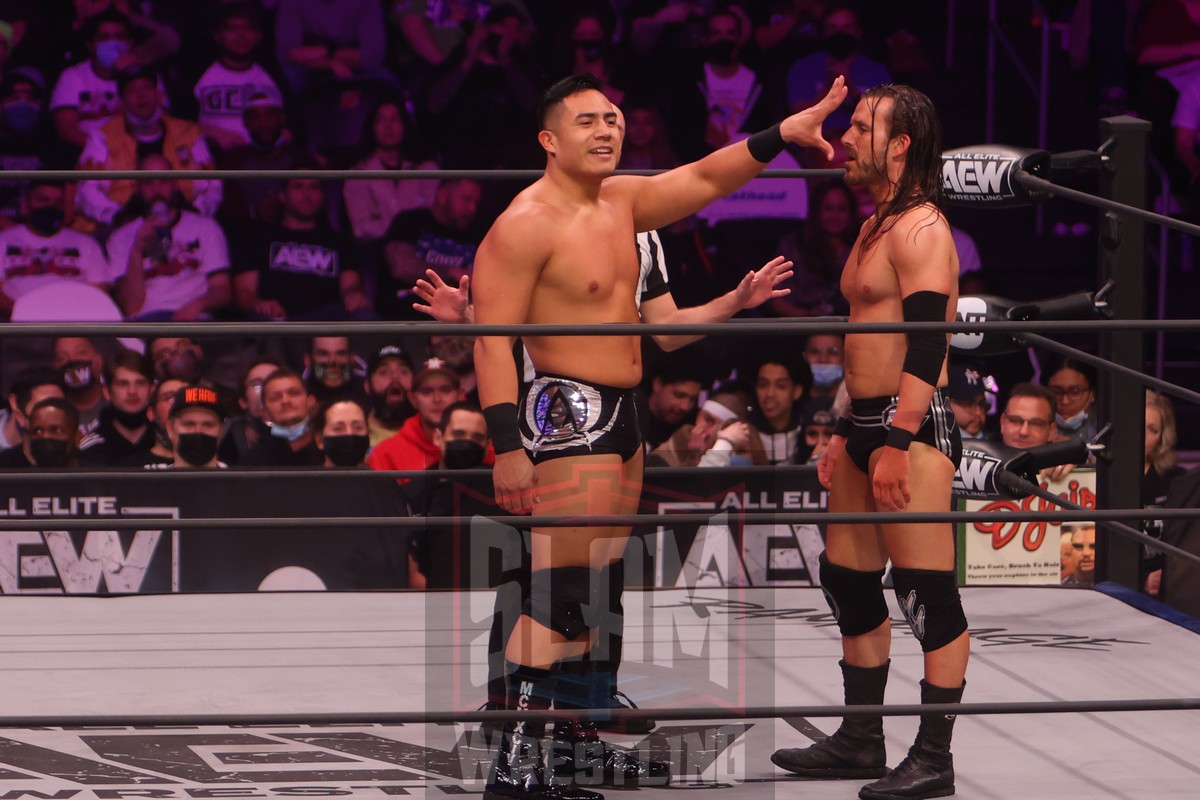 Atlas was outwrestling Cole, but Cole used his wily veteran skills to send Jake to the floor hard. Cole then tore into Atlas with some basic strikes.

Adam fought back and rocked Cole with a huge forearm, but when he went for a Springboard move follow-up, Cole countered with a Backstabber.

Cole was in control during the Picture-in-Picture (PiP), but as soon as they got back from commercial, Atlas recovered with a Hurancarana, a Suicide Dive to the floor, and a Springboard Dropkick. Cole came back and hit a couple of vicious Neckbreakers but Atlas wouldn’t stay down. Atlas powered up and hit a big Suplex Driver, but Cole kicked out. Atlas then went for a Springboard move, but Atlas countered with a big kick. But it wasn’t the kick that dropped Atlas, but rather a tweaked knee, as he was unable to stand up. Cole, seeing Atlas injured, abandoned a Panama Sunrise attempt, and instead locked on a kneebar to get the submission win.

After the match, ReDragon (Bobby Fish and Kyle O’Reilly) came to the ring to celebrate and to beat up Atlas some more. But then Orange Cassidy and the Best Friends came down and chased them off.

This was a really good match up until the unfortunate injury to Jake. Also unfortunate is that they would have Atlas lose so early in his AEW tenure. Not sure if that was the plan all along, or if they switched it up because of his injury. If the former, that’s a confusing booking choice. If it was the latter, then they ideally would have had the ref stop the match due to injury, as opposed to Jake taking a clean loss. 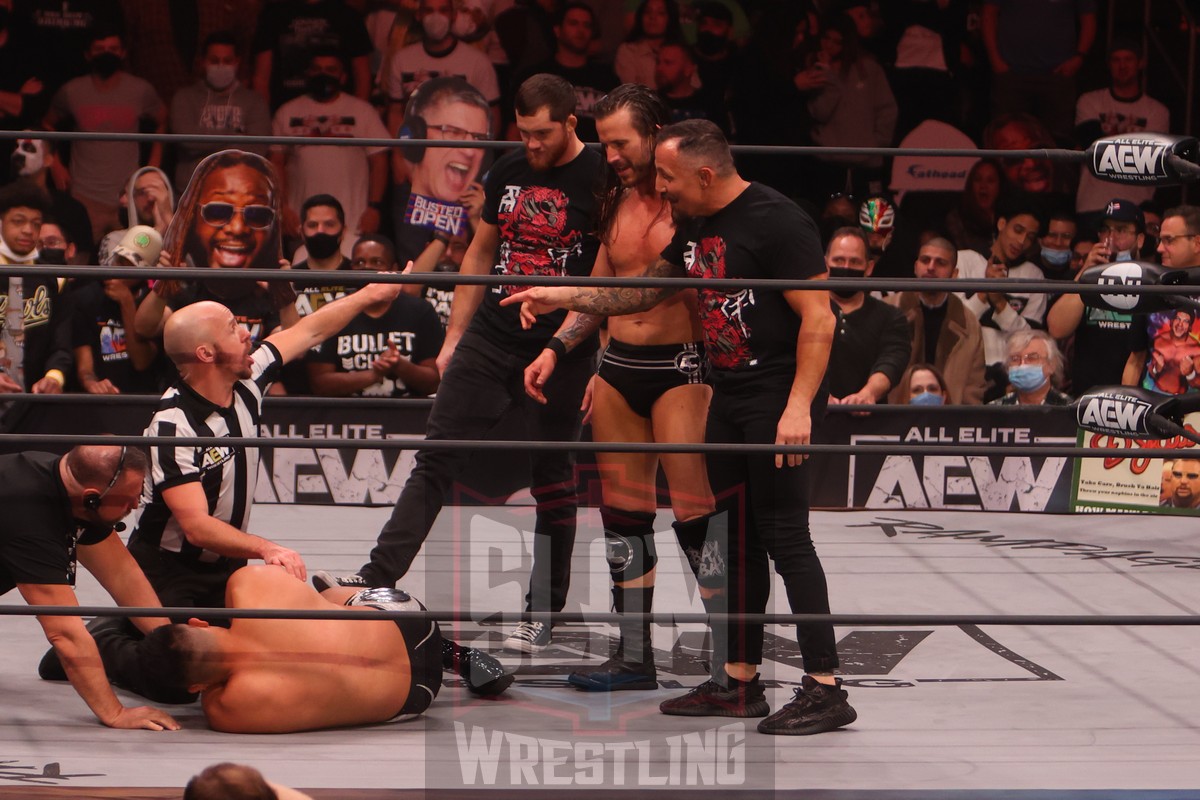 It was announced that Cody Rhodes will not be able to face Sammy Guevara for the TNT Championship tomorrow due to “medical protocol.” Instead, it was announced that Cody’s brother, Dustin Rhodes, will face Sammy to crown the Interim TNT Champion. Dustin and Sammy cut short video promos about the match. For those keeping score, Sammy got the obligatory swear word in, as presumably there is some kind of quota AEW has to reach on each show.

Backstage, Tony Schiavone interviewed Andrade Il Idolo to find out why Andrade attacked Sting last week. Idolo said that he and his flunky Jose are so busy that he needs a new assistant. He thought Allin worked for Sting and was interested in buying “this little kid.” Schiavone tried to clarify that Allin wasn’t Sting’s employee, but rather his friend, but Idolo didn’t understand. This was pretty funny.

.@tonyschiavone24 takes a minute to chat to @AndradeElIdolo and it seems as though #Andrade and his assistant @JoseAssistant, have quite busy schedules lately, and have proposed somewhat of an offer to @DarbyAllin and @Sting.. pic.twitter.com/9VrdgjYPMk

Hook outmuscled Solo early on, heaving him with a Suplex and then blasting him with strikes in the corner. Marshall distracted Hook and Solo capitalized, nailing Hook with some hard shots. But that didn’t last long, and soon Hook had an Octopus submission hold locked on. He then hit the El Camino Suplex, and then a sweet-looking TazPlex. A few strikes to the head and a TazMission was enough to get Hook the submission win.

After the match, QT got into Hook’s face. He tried to sneak attack Hook, but a Head and Arms TazPlex stopped that noise. After dumping QT on his head, Hook left triumphantly.

This was another strong exhibition for Hook who has gone from non-entity to big star almost overnight. 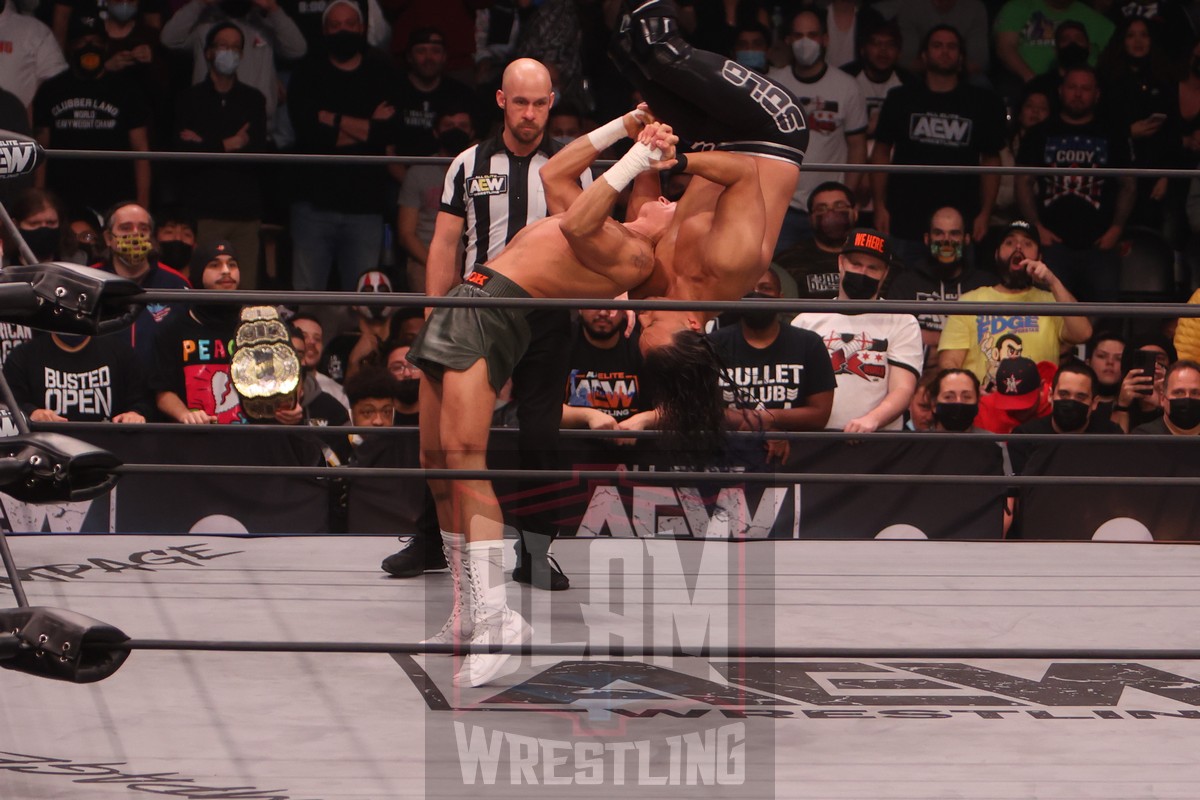 Ricky Starks announced that he will defend the FTW Championship against Matt Sydal at Saturday’s Battle of the Belts show.

Britt and Jamie attacked before the bell, but after a short brawl, Ruby and Riho were in control. They worked over Jamie for a bit, and when Jamie escaped, they did the same to Britt, until Rebel’s assistance from the outside let Britt hit a cheap shot on Ruby to take her down.

During the PiP, Britt and Jamie isolated Ruby in their corner and kept up a constant barrage of offense on her. At one point, the PiP lost the actual AEW feed, but presumably Britt and Jamie continued their beat-down.

When the commercials ended, Ruby got the hot tag, and Riho came in on fire, taking down both Hayter and Baker. As is customary in AEW tag matches, the ref lost all control and stopped caring who was in the ring or for how long. And somewhere in that kerfuffle, Riho rolled up Britt Baker for the pin.

After the match, there seemed to be some dissension between Jamie and Britt. 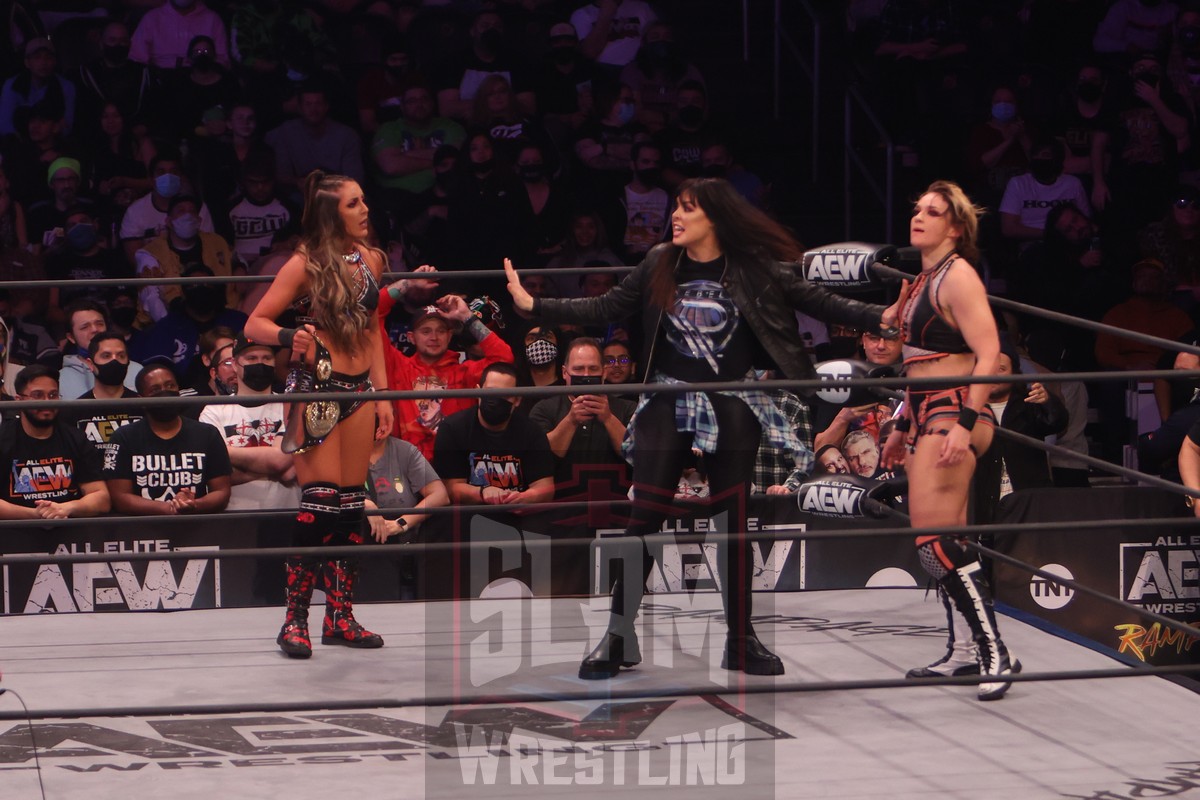 Reba gets between Britt Baker and Jamie Hayter at AEW Rampage, taped at the Prudential Center in Newark, NJ, on January 5, 2022, and airing January 7, 2022 Photo by George Tahinos, https://georgetahinos.smugmug.com

Dan Lambert cut a backstage promo with Ethan Page and Scorpio Sky. He complained about Cody getting a title shot despite Sky having a better win-loss record than Dustin. They said they would be watching the match between Dustin and Sammy very carefully.

Mark Henry hosted a split-screen face-off between the competitors in the main event. As 2Point0 and Daniel Garcia yelled a lot, Eddie Kingston, Santana, and Ortiz walked away and off-screen. But then they appeared on the other side of the split-screen as they attacked the big talkers. As they brawled, Mark Henry cheerfully ended the segment.

The brawl was already in progress when the show came back. Eddie smashed Garcia in the head with a garbage can as the other four battled it out ringside and in the stands.

Eddie continued to use the garbage can on Garcia’s head to good effect. Their fight then spilled to the floor while the other four battled in the crowd. This was way too busy and chaotic, it was like the visual equivalent of Chris Jericho commentary.

They went to PiP and Excalibur said we didn’t want to miss anything in this match, but  really it was more of the same going on, so missing it didn’t really matter.

When the PiP was done, the no-DQ brawl had evolved and they were actually doing wrestling moves in the ring.

Then the one 2Point0 guy threw powder into someone’s eyes, and Garcia smashed Eddie Kingston in the head with the ring bell (well, that was what it was supposed to be – he missed by a mile). Then Eddie got Triple-Suplexed through a ringside table. Either Santana or Ortiz got low-blowed, and the other one hit someone with a chair (my feed cut out for a second, but it doesn’t really matter).

They went back into the ring, Santana and Ortiz hit a double-team move on one of the 2Point0 guys and got the pin.

After the match, the bad guys hit low blows all around. They duct taped Eddie to the ropes and triple-teamed him until Chris Jericho walked to the ring and – despite him not wielding a weapon –  the heels were scared enough to run away. So not only did they lose, but they weren’t even allowed to do anything heelish to get back their heat after the match. So can we assume this whole feud is finished? Please? Because nobody should have to sit through that again.

This was really bad. 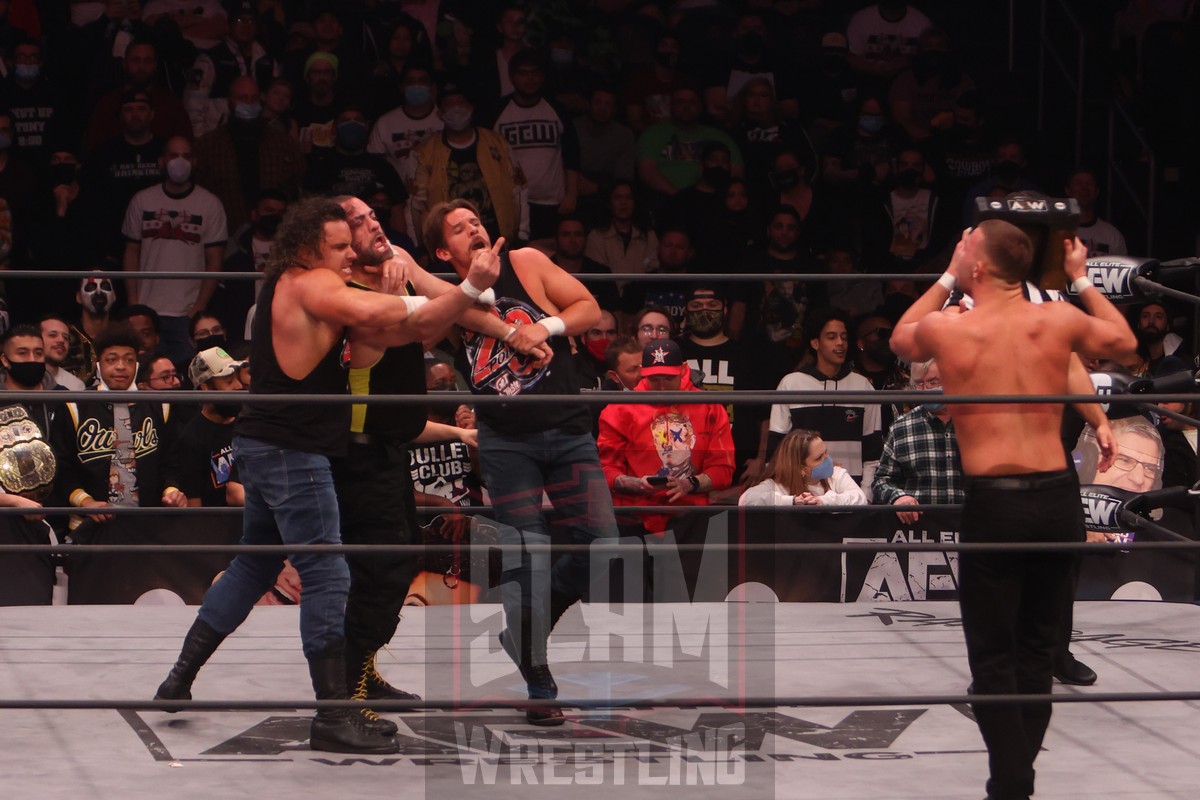 Eddie Kingston is defiant as he is held by 2.0 for Daniel Garcia to hit in a No DQ match at AEW Rampage, taped at the Prudential Center in Newark, NJ, on January 5, 2022, and airing January 7, 2022 Photo by George Tahinos, https://georgetahinos.smugmug.com

TOP PHOTO: Eddie Kingston goes after Daniel Garcia in a No DQ match at AEW Rampage, taped at the Prudential Center in Newark, NJ, on January 5, 2022, and airing January 7, 2022 Photo by George Tahinos, https://georgetahinos.smugmug.com

There was some good stuff on this show, but unfortunately it was over-shadowed by the bad. Atlas and Cole was strong and worthy of a rematch when Atlas is able to do so. And Hook has absolutely hooked the fans with his no-nonsense ability, squashing opponents with ease. As for everything else… well… um… But Hook was good.