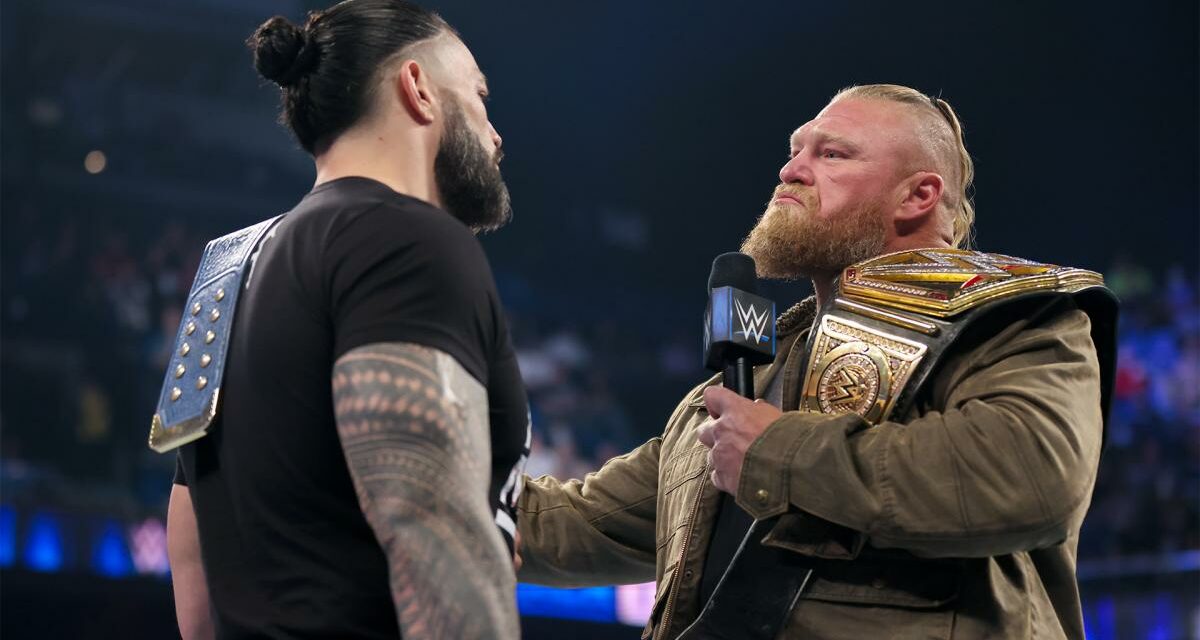 Roman Reigns, less than a week after testing positive for COVID-19 and dropping out of the Day 1 PPV, returns to SmackDown, ready to discuss what was on his mind during his isolation. Somebody’s got a mind to interrupt, though, and it’s the new WWE Champion Brock Lesnar — accompanied by Paul Heyman.

Lesnar throws down a title for title challenge, even though he’s already got a match against Bobby Lashley awaiting him. Reigns plays the heel by turning him down and disappointing the crowd. He also disappoints Heyman by talking down to him, but Paul admits to having full loyalty to Reigns while Lesnar was gone. This upsets Brock, and the two champs weirdly argue over who gets to insult Heyman until Reigns downs Lesnar with a Superman Punch.

After the break, Megan Morant catches up with Sami Zayn about his upcoming Intercontinental Championship opportunity, but soon after that Zayn chats with Johnny Knoxville about his appearance in the Royal Rumble. Zayn calls him unqualified.

Zayn is suplexed, tossed, and pressed all around right out of the gate. Zayn recovers by clotheslining Boogs across the top rope and dropping an elbow across his head. When he tries a second time, though, Boogs catches him, bear hugs him, and suplexes him to boot. 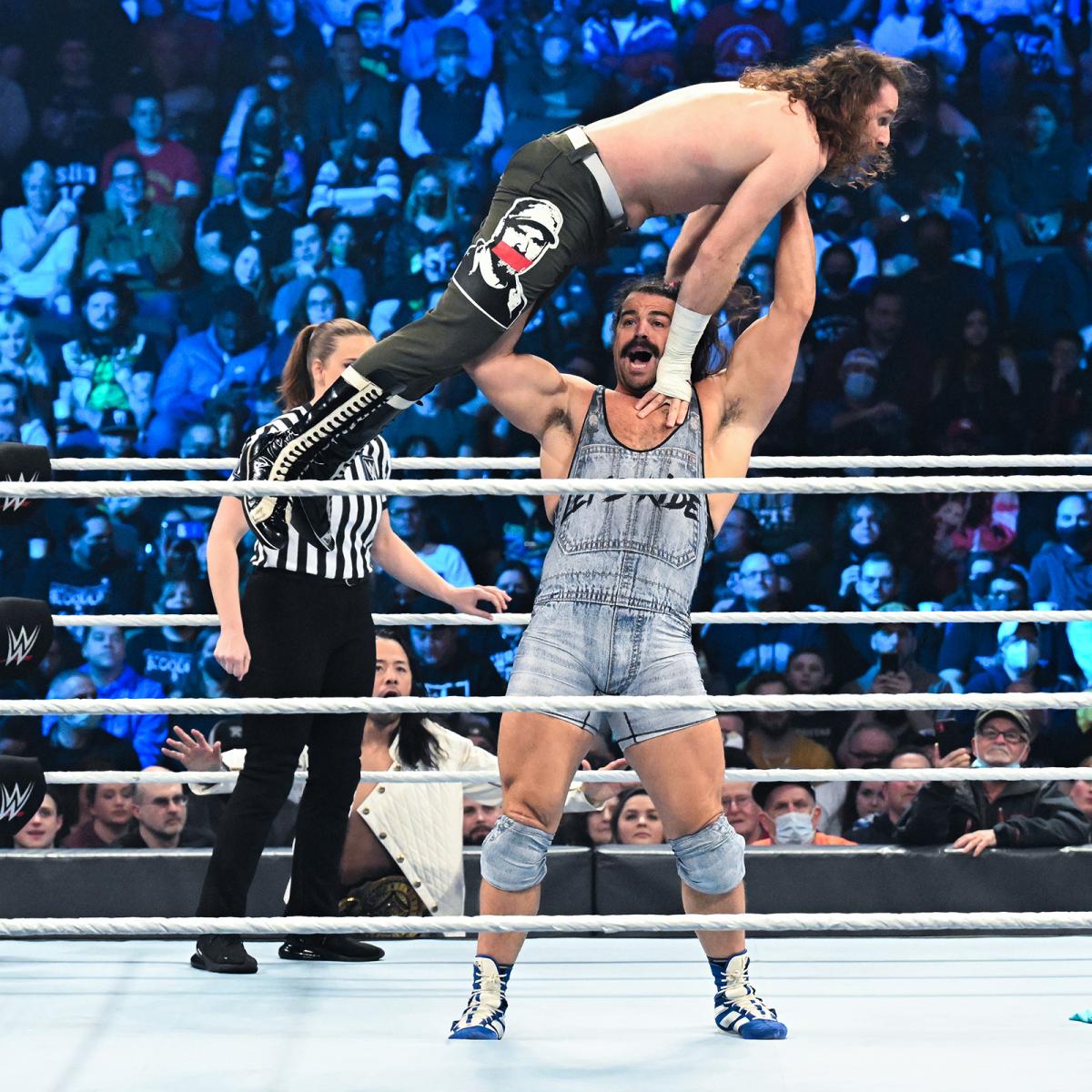 Whatever Zayn’s plan was, this surely wasn’t part of it. Photo: WWE

The fight spills to the floor where Zayn gets in Nakamura’s face, and when he returns to the ring Boogs rolls him up for the win.

As Zayn jaws it out with Boogs and Nakamura on the floor, Knoxville enters the ring and throws Zayn over the top rope, officially qualifying himself for the Rumble.

Backstage, King Woods and Sir Kofi are with Kayla Braxton, discussing their street fight with The Usos tonight. These two teams are having too many matches together lately.

Back in the ring, Charlotte Flair has a mic to talk about her ambitous plans for 2022, but she’s also focused on who will win the Royal Rumble and presumably choose to face her and gain recognition. Like Reigns earlier tonight, Flair is also interrupted. 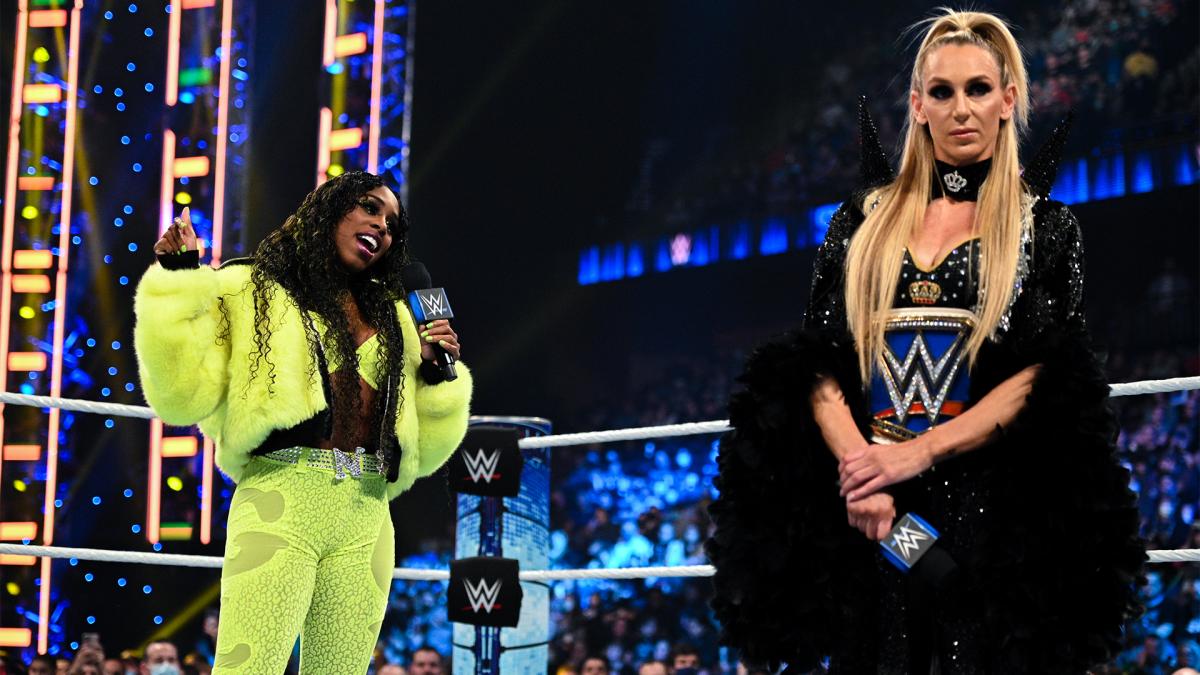 Naomi struts to the ring and challenges Flair for the title tonight. Flair looks to defer, but Naomi slaps her hard across the face, which seems to be enough to grant her this stupid opportunity:

Yup. Naomi can beat the champ for a chance to beat the champ for real. Flair is in command early, taunting and slapping Naomi around and running her from corner to corner. A low clothesline from Naomi gets her a one-count, but a backbreaker from the champ turns the tide again. Flair cinches in a headscissors on Naomi, driving her head into the mat a few times for good measure, and when Naomi fights back and climbs the ropes for a leaping attack, Flair kicks her off and all the way to the floor.
They fight by the barricade, where Naomi leaps off with a blockbuster to take Flair out. As Naomi is about to win by count-out, though, Sonya Deville pops out to announce that a count-out won’t, well, count. The match continues, and though Naomi lands a big leg drop and a cross-body off the top rope, she can’t get the pinfall. Flair dodges the Rear-View and gets on a figure-four, but as Naomi reaches the ropes we hear from Deville again — the match is also No-DQ.
Naomi tries a split-legged moonsault, but she inexplicably hooks her legs and stays perched on the top until Flair hits her from behind. Pat McAfee tries to spin it that Naomi must have somehow known the moonsalt wouldn’t work. Nice try, Pat. Moments later, Natural Selection ends the match in Flair’s favour.

It’s The Usos’ turn with Braxton, and they really don’t have much to say. They’re confident about winning, let’s just say that.

Adam Pearce catches up with Sonya Deville, and Pearce says he has been tasked with choosing a challenger for Roman Reigns at the Royal Rumble.

Happy Talk is missing something: Madcap Moss. Is it due to COVID? Corbin hints at that before he announces his guest: Drew McIntyre. But wait! That’s not Drew! Moss limps to the ring wearing a kilt and a neckbrace. Corbin wants to hear how “Drew” is doing, and Moss, in a decent Scottish accent, expresses his disgust for Haggis, his fear of Corbin, and his plans to retire.

Erik and Ivar, The Viking Raiders, don’t find this at all funny and run to the ring early for their match against Corbin and Moss, chasing them from the ring.

The Raiders muscle their suddenly serious opponents around, but a cheap shot by Moss on Erik from the apron allows Corbin to follow with a Deep Six. Moss and Corbin follow up with quick tags and a very basic beatdown of Erik in their corner. As Erik is about to make his way to his corner for a tag, Corbin pulls Ivar to the ground and Moss follows with his Punchline finisher for the win.

Sheamus gets a backstage promo, calling out Ricochet for injuring Ridge Holland, and also inserting himself into the Rumble.

In Reigns’ suddenly lonely looking temporary office, Pearce is here to tell him who his challenger is. Reigns doesn’t care, though, and sends him away without letting him tell us (rude).

After a couple of opening moves, we go to break and return to see the teams fighting up near the big screen. The Usos are both thrown into the video wall and are immediately led back to the ring once again. Jey pulls Woods up to the apron by his hair, only to have the King hit him with a tornado DDT. Jimmy enters the ring as well and brings Woods down with a Samoan Drop, and both Usos bring Kingston down next with an alley-oop version.

Jimmy uses duct tape to strap Woods to the top rope, but Kingston fights off both Usos and very quickly frees his partner. The fight goes to the floor again, where The Usos do plenty of damage on the New Day with the ring steps. Back from a commercial break, Woods brings out a gladiator’s helmet and chest plate from under the ring. Finally, something other than kendo sticks!

Woods headbutts Jimmy while wearing the helmet and Kofi hits him with the chest plate to follow. The crowd, though, falls into old, boring habits and chants for tables, cheering when the New Day leans one against one of the corners. Superkicks bring down the New Day, but Jey suffers a Trouble in Paradise, forcing Jimmy to break up a pinfall. A double superkick by the Usos on Kingston allows the Usos to move the table to the middle of the ring and perform a 3D finisher on Kingston onto the table for the win.

Winners via pinfall: The Usos

Only one thing left to do, as Reigns responds to a knock on the door to see his challenger: a cackling Seth Rollins.

A very okay show. Championship contender’s matches will always be dumb, and having the Usos beat the New Day twice within six days does nothing for either team. Moss was good, though, and it will be fun to see him turn on and break away from Corbin, presumably pretty soon.