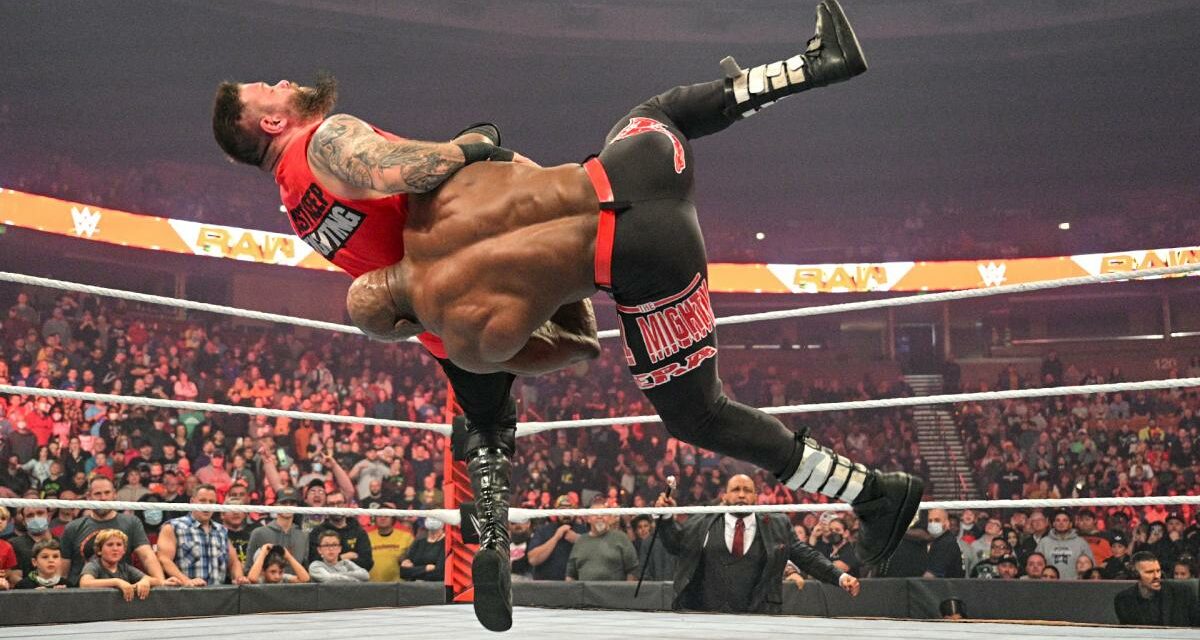 In the COVID Era “card subject to change” has never carried so much weight. With Roman Reigns out with a positive test, Brock Lesnar was added to the Fatal Four-way WWE title match. Spoiler alert; he won. Any plans for tonight had to be thrown out the window. Brock isn’t even supposed to be on RAW, and yet here we are.

Paul Heyman is revealed to be in the ring after the lights go down and come back up. He introduces your reigning, defending, undisputed WWE Heavyweight champion of the world, Brock Lesnar.

Brock tosses the ring steps into the ring and makes himself a podium. He shouts out Roman Reigns and wishes him to get well soon. Brock calls himself the real champion. Heyman explains how Brock got into the match at Day 1 and now he is here to defend that title. Lesnar will defend against the winner of the original fatal four-way match at Day 1. Paul runs down Brock’s possible opponents in Seth Rollins, Kevin Owens, Big E and Bobby Lashley. Heyman puts over Big E, saying it would be an honor to face the former champ at the Royal Rumble.

Randy Orton is back the gorilla position ready for his match, when Riddle shows up absolutely blinged out. Respect the drip, Randy. Orton wants nothing to do with the drip, but after hanging out with the Migos, Riddle wants to start a rap group. Orton makes Riddle take off the shades and the gold chains. Orton wants Riddle to listen to him; when they are on the same page, good things happen.

Gable and Otis attack Riddle and Orton before the bell. Otis hits Riddle with an exploder on the floor.

The match starts after the commercial break, with Gable working over Riddle. Riddle then gets crushed by Otis in the corner. Orton fights Gable on the floor, only to get steam rolled by Otis. Riddle looks for the RKO, but Otis blocks it and hits the World’s Strongest Slam. Otis covers and gets the win.

Omos shuts up Kevin Patrick by palming his face.

Yea, this is dumb, even for the WWE. And at least Cory Graves calls out the face that if Reggie gets pinned or submitted Dana loses her title. Dana wants a tag, but Reggie says he has this. Akira misses a kick and connects with Tamina. She slaps him, allowing Reggie to hit a somersault senton. He covers and gets the win.

RAW Women’s champion, Becky Lynch, makes her way to the ring. She talks about the turning of a new year and how all the women in the back want to be the champion. She calls her self WWE’s Vincent van Goat, before insulted the South Carolina crowd. Becky final gets around to talking about Liv Morgan breaking her promise of becoming champion.

Morgan walks out on stage to refute those claims. The only thing Liv ever promised herself is that she would give it her all in every match. And she did that at Day 1. Bianca Belair would like to enter the chat. She did step aside to allow other people the time to catch up, but now she is back in line for Becks. Becky wants Liv and Bianca to figure this out one on one and let her know later. They both attack her and throw the champ out of the ring. Liv and Bianca start to thrown hands. Liv with a step up kick. Bianca gets Liv up for the KOD, but Becky breaks it up and slams Belair.

Seth Rollins wants some advice from Kevin Owens on what to do about Heyman. Owens thinks they need to figure out what they are going to do tonight in the fatal four way.

Zelina slaps Ripley in the face, so Rhea drops her with a one arm delayed suplex. Nikki tags in, hitting a snap mare. Zelina knocks Ripley off the apron and then counters a fireman’s carry from Nikki into a roll up. Zelina is able to get the three count and the pin.

Johnny Knoxville, yes that Johnny Knoxville, announces his entry into the 2022 Royal Rumble. Listen, I’m all for this, but does he has to be the first one to announce? Well, that announcement just opened the floodgates. The Streets Profits announce their entry, followed by the Mysterios.

The Street Profits vs. Apollo Crews and Commander Azeez

Ford makes a blind tag as Dawkins hits Crews with a spinebuster. Ford goes up top and connects with the frog splash. He covers Apollo and gets the pin.

Damien Priest talks about keeping cool in his match tonight, but that’s up to Dolph Ziggler. In a fair fight, Priest will keep his cool, but eitehr way he will retain his United States Championship.

Doudrop burst into Adam Pearce’s and Sonya Deville’s office yelling about Bianca and Liv getting another chance at Becky Lynch. She demands a chance. Sonya tells her that next week there will be a triple threat match and the winner will face Lynch at the Royal Rumble.

Now if Priest gets disqualified or counted out he will lose his title. Priest beats Ziggler down in the corner, barely stopping before the five count. The fights goes to the floor and Ziggler hits a tornado DDT. Unfortunately, WWE cuts to commercial, sucking all the drama out of a possible count out. Ziggler taunts Priest, trying to enrage him. Instead, Damien drops him with a cliffhanger DDT. Ziggler catches Priest on the top turnbuckle, but Damien drops out and kicks Dolph in the face. He goes back up to, only to get shoved to the mat by Robert Roode. Ziggler hits the famouser, but can only get the two count. Priest goes after Roode on the floor and grabs a chair. He looks to strike, but has to get back in the ring to break the count. Ziggler wants a chair shot. Instead, Priest throws it at Roode on the apron. Ziggler hits a Zig Zag, but Damien kicks out at two. Priest blocks a super kick and hits the Reckoning and gets the pin.

Austin Theory interrupts Mr. McMahon on the phone. Vince doesn’t want him to apologize. Theory wants a rematch with Finn Balor. Vince has a surprise for young Austin; a spot in the 2022 Royal Rumble.

The Miz and Maryse are in the ring. Miz is outraged that he lost at Day 1 to Edge. He can’t believe Edge let Beth Phoenix, his own wife, fight his battles. What kind of man would do that? If Beth Phoenix were here, Maryse would punch her in the face. Well, Beth is here. Along with Edge. The Miz is at a loss for words, which may be a first. Everything that went down at Day 1 was Beth’s idea. Edge is crazy enough to give Miz what he wants. Actually, they both are willing to give them what they want. The Rated R Superstar and the Glamazon versus the IT Couple at the Royal Rumble. Miz accepts, but Maryse is not pleased. She looks downright scared. Beth fakes a punch and Maryse hits the mat.

Obviously, Big E is extremely motivated to win tonight, what a dumb question.

Styles is forced to retreat from the ring, but then enters to take a big boot. AJ gets manhandled by his former tag team partner. AJ does get a few kicks in and looks for the Phenomenal Forearm. Omos catches him and swats him out of mid-air. Omos drop Styles with a military press and finishes him off with the vertical chokeslam. Omos covers and gets the win.

Lashley and Rollins fight on the floor as Big E and Owens brawl inside. Lashley smacks Rollins off the ring post, while Big E spears KO off the apron through the ropes. Big E and Lashley face off, with Lashley hitting a clothesline and follows with a vertical suplex. Lashley looks for a spear on the floor, but dodges. Lashley crashes through the time keeper’s area. Big E tears apart the announce desk, but Owens saves Rollins from a bad fate. Big E is slammed into the ring steps and then the ring post. Rollins and Owens team up on Big E, power bombing him through the announce table.

After the commercial break, Lashley and Big E are down in the ring, getting worked by KO and Rollins. Rollins is whipped into a the UranagE. Owens with a super kick to E, but then gets clotheslined by Lashley. Rollins and Owens clear out of the ring, heading into the crowd. Big E and Lashley follow. All four men fight on the concourse. Rollins gets put in the Hurt Lock. Owens strikes Bobby with a trash can lid. Big E slams Owens through a merch table.

After another round of commercials, all four men are back in the arena, but now Big E and Lashley are fighting in the crowd. Rollins tries to gain some control, but E and Lashley gang up on him. Kevin Owens crashes in from on top of one of the tunnels to take everyone out.

Owens rolls E into the ring and hits a senton. Rollins is right behind him with a splash. Big E barely kicks out. A dual super kick rocks Big E. Owens with a pop up power bomb, but Lashley breaks the pin. Lashley tosses KO and Rollins around the ring. He follows Owens to the floor and runs him over. Rollins with a rolling elbow to Lashley. Bobby catches Big E with a spear and also has one for Seth. Owens with a super kick, but Lashley blocks the stunner. He cuts Owens down with a spear and covers to get the three count.

After the match, Brock Lesnar was asked for comment. He wants Roman Reigns to know that he will see him this week.

I can’t ever give a three hour RAW higher than 4 stars, but tonight show had it’s high points. Brock Lesnar as champion actually works. The United States championship match was very good and make sure to watch the fatal four-way main event. That was a PPV quality match.