AEW Rampage to ring in the New Year Smash 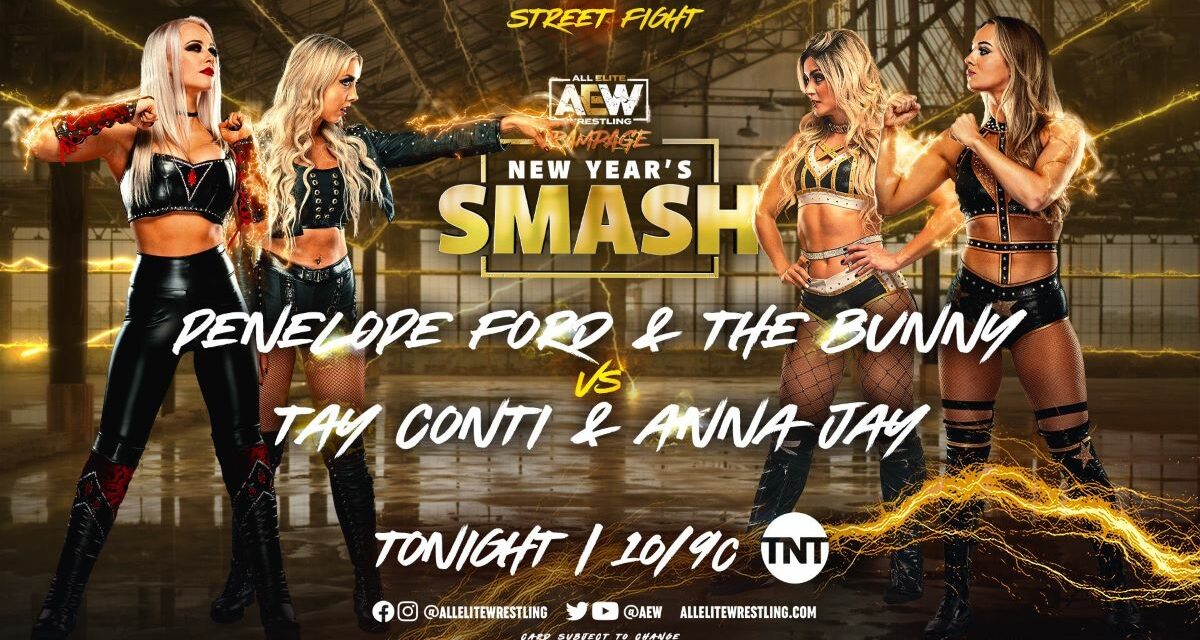 It’s Friday night, and you know what that means?  No, not to make fun of people in Range Rovers, nor to search for Elvis in a 7-Eleven.  It’s time for AEW Rampage, and we are Taped in Jacksonville, FL, at Daily’s Place, the unofficial home of All Elite Wrestling.

Your commentators Excalibur, Tony Schiavone, and Ricky Starks have the call, and it’s time to get to the action.  The thing I like best about this Rampage episode?  It’s short.

(Author’s Kinda-Sorta Snarky Rant:  Honestly, I’ve been used to a less-is-more mindset, and that might be a model for AEW to follow in the future.  Two hours is okay; three is pushing it.  Let’s see how the show fares as a result.) 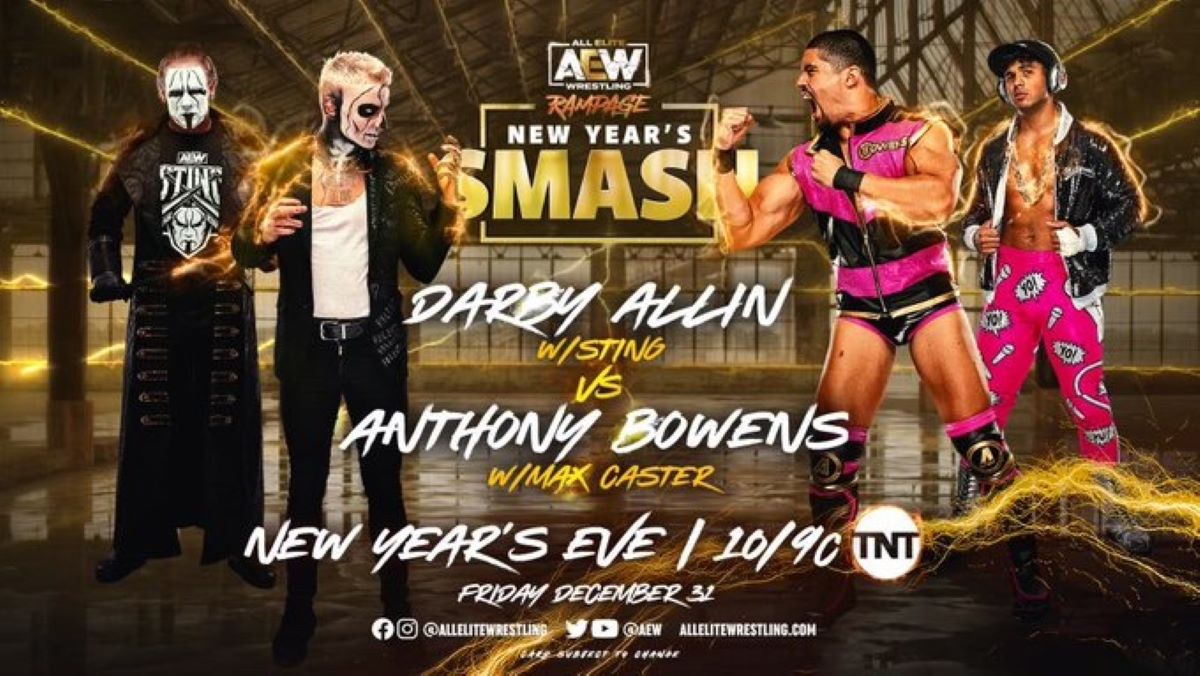 Darby Allin (with Sting) vs. Anthony Bowers (with Max Caster)

I wanna get behind The Acclaimed, but they lately haven’t made a huge impression on me as a whole.  But this match with Allin and Bowers, has some classic work going for it.  Bowers has the power, but Allin has the quick agility to stave off Bowers’ assault.  Of course, Caster gets up on the apron to distract, but Allin flips him off.  As Bowers rushes, Allin sidesteps and pushes Bowers to Caster, knocking him off apron.  Allin is on the outside, but Bowers pushes him to the ring post, hurting his shoulder.  Bowers is in control during Picture in Picture ™, and Bowers keeps exacerbating the injury.  Allin rallies but a Bowers superkick stops the momentum.  Allin goes up the top turnbuckle, but gets knocked off and Bowers delivers a sick twisting neckbreaker as Allin hangs from the turnbuckle.  Bowers covers for a two count.  Allin tries to get momentum going again, but Caster tries and distracts again.  This time, Sting pulls him down.  Bowers goes to his Acclaimed front man, but Allin gets a Code Red for a two count.  It’s all in for Allin with a tope suicida to the outside, and he gets Bowers in for a Coffin Drop to get the pin and the win.

Your Winner via Pinfall:  Darby Allin

As Allin and Sting celebrate, Andrade El Ídolo comes out, and Caster and Bowers use that distraction to punk out Stinger and Allin.  Better to be a sore loser, than a sore winner, I suppose.

Now we get Technique by Taz, highlighting his son, Hook. Taz spends time diagramming how his utilization of moves.  John Madden he ain’t, but it’s pretty entertaining how Taz explain why the moves are important.  A Madden of the wrestling mat, he is.

And now for something complete, utterly bats*** insane, it’s time for a… 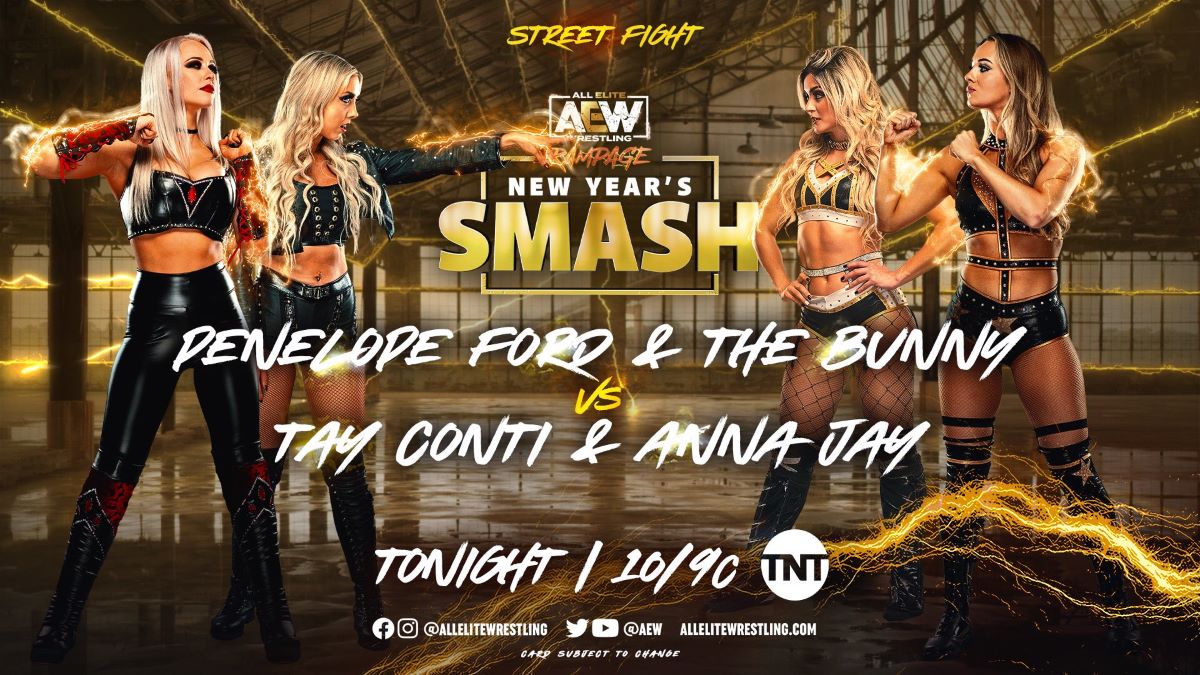 First:  props o the women coming in jeans and white tees for this street fight.  Very old school.   Ford and Bunny brings chairs, but Jay and Conti bring a trash can as well, and it’s go time from there, Skippy.  None of these women are holding back, and the fans are lapping this up.  At one point, Ford rams Conti to the ring post, and grabs a bottle and slams it to Conti’s head.

That's one way to pop some bottles on NYE 🍾 #AEWRampage pic.twitter.com/8I6hbjE4sa

It is utter pandemonium.  Now, Bunny is also bleeding from the scalp, and I can honestly say she is even scarier to behold.   Conti is also wearing a crimson mask, as Ford and Bunny set up another table comes to the ring, with a lip print on it.  The mayhem continues, as Jay hits a suplex to two chairs on Bunny and she is crumpled up. The violence keeps escalating during Picture in Picture ™, as Conti hits a DDT to Bunny on a chair seat to cover for a two count, and that leads into…

(Author’s Annoyed Rant:  Can someone explain why in brown Jesus’ name is there a point to having Picture in Picture ™ if, after a couple of minutes of running ads simultaneously with the action, you cut to more ads?  I’d really love someone to explain the point to me, because I’m lost!)

We come back to Jay in a sleeper hold to Bunny, but she backs up to slam them both to the lip print table in corner. Bunny covers, but gets a count of two.  Ford gets Conti in a cutter to a ladder on the outside of the ring, and the fans are chanting “A-E-Dub!”  Now, Bunny grabs a canvas bag and spreads the ring with thumbtacks. Bunny sets Jay up top, but Jay reverses with a superplex onto the tacks.  Bunny screams bloody murder and Jay covers but Ford breaks up the count.  Conti, wearing an impressive crimson mask herself, gets on the apron and delivers to Ford a cradle Piledriver to a table on the outside.  Bunny, with a crimson mask of her own, gets the brass knuckles and stalks Jay, but slips to a split…onto the thumbtacks.

Regardless of which gender you are, say it with me:  That.  Bloody.  Hurts!  Jay wraps her arm in barb wire and, channeling her inner Jon Moxley, sinks a sleeper hold for Bunny to tap out.

Your Winners via Violent Submission:  Tay Conti and Anna Jay

Yeah, this delivered all the goods.

We now turn to a vignette of the AEW championship match with “Hangman” Adam Page and “The American Dragon” Bryan Danielson going to a count out, and how that match will be the centerpiece for when AEW goes to TBS next Wednesday.  I, for one, dig the heel work by the American Dragon, and Page definitely needs to get his Cowboy Stuff going.

Mark Henry is with Dan Lambert with the Men of The Year, and Cody Rhodes has Arn Anderson in his corner.  Now, Lambert talks a big game, but face it.  There is one constant in the wrestling universe, and that is never go up against The Enforcer; not in a match or in a war of words.  With that, Henry lets us know that it’s time for the Main Event… 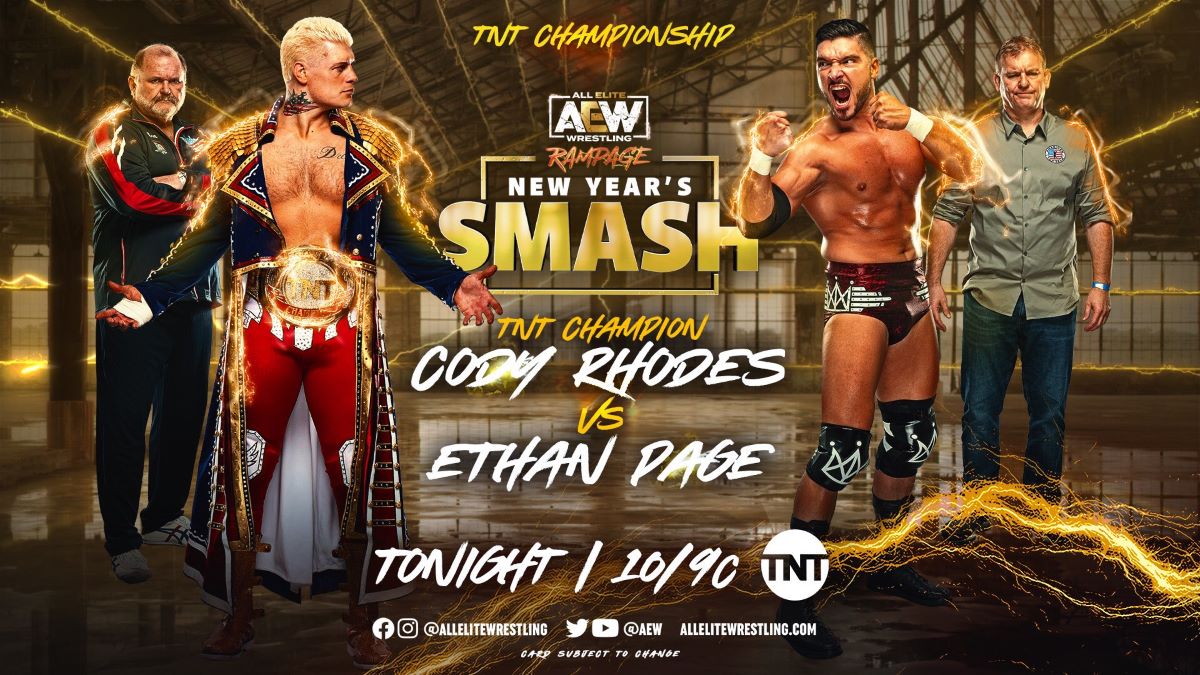 Justin Roberts is in the center of the ring with Boxing Style intros, and there is a mix of cheers/boos for The American Nightmare (or, as I’m calling it, Cena Heat ™). Rhodes outwrestles Page at the start of the gate, but there is early interference by Lambert, and Page takes advantage for a short spell before Rhodes is back in control.  The Jacksonville crowd chant “Let’s go Cody/Cody Sucks”, and it’s an even 50/50 split.  Now Page hits with a shoulder tackle from the apron to the floor.  Page goes for a suplex, but Rhodes reverses it to a chop block, and gets in a modified Indian Deathlock.  Page gets roll up during Picture in Picture ™, but Rhodes works on stomping down Page.  Rhodes focuses his attention on the knee/leg of “All Ego” with a dragon screw leg whip, and “The American Nightmare” is becoming more consistent with heel tactics.

A suplex attempt by Rhodes is stopped by Page and pushed off.  Page gets a DDT to Rhodes to cover for a two count.  Rhodes rolls out of the ring, and Sky puts the boots Cody.  Of Course, Arn steps in, and then big brother Dustin Rhodes comes out and sends Sky to the guardrails.  Back to the ring, it’s a Cross Rhodes and a cover for one, two…just a hair short of a pin.  Now Rhodes takes off Page’s knee brace, and stomps away at the exposed knee.  Rhodes sets Page up the top turnbuckle, and Page fights off and gets an avalanche powerslam for a two count, since Page was in too much pain that he could not cover.  Rhodes gets back up and nails a springboard Cody Cutter, and he’s drapes arm for a cover for one, two…Oh, man!  So Close.  Even Excalibur exclaims that the count was “2.99 away from a win.”  Somewhere, Rhodes channels his inner Nature Boy, and gets Page in the Figure Four leglock (Woo!), but Page reverses the submission and Cody reaches for the ropes to break the hold.  Finally, the American Nightmare gets another Cross Rhodes, followed by a second one.  But, wait!  There’s more sports fans!  Rhodes adds the exclamation point with a double undertook piledriver, and gets the cover for one, two, and three!

After the match, Cody raises arm to a chorus of boos, and we close the show on TNT.

So, the match with Allin/The Acclaimed looks like it has some legs for a potential feud down the road.  The street fight had everything except the kitchen sink thrown in, and all four women are to be commended for putting on a very physical match that was the equal of their male counterparts.  Both those matches were 3 an 4-star matches, easily.

The Main Event, though?  It was just “meh” for me.  Doesn’t help when your champion is trying to be a face/’tweener, but he gets that Cena Heat ™.  This was a two star match, at best, hence my overall rating.  Again, I say this:  Less is more.

It was a wonderful time watching wrestling on TNT after so long, but It’s now off to 2022 to TBS for All Elite.  Until then, we’ll see you in seven!