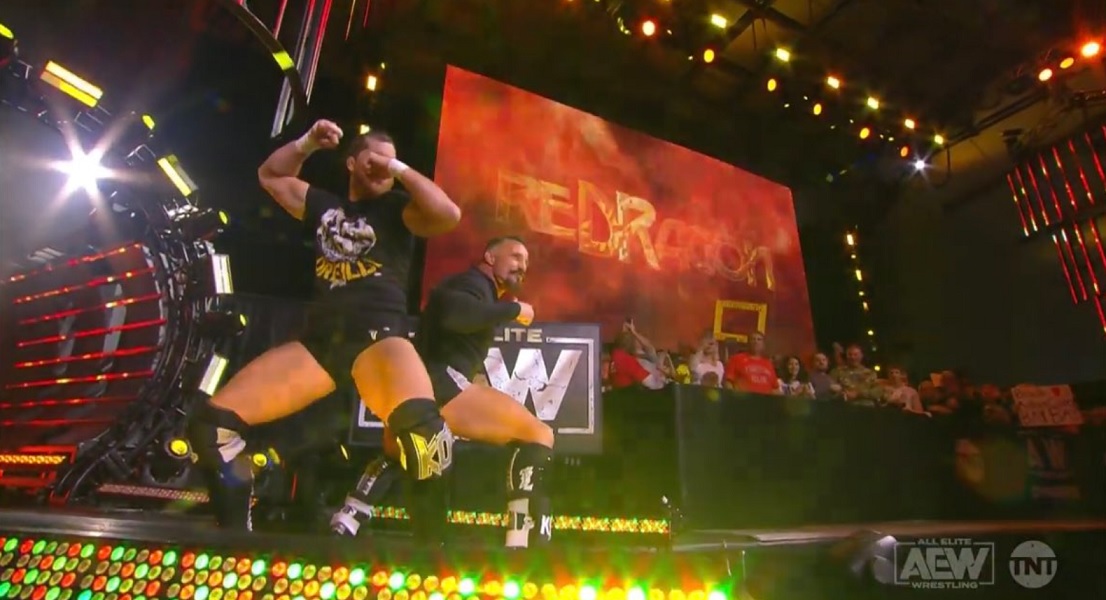 It’s the end of not just the year on AEW Dynamite, but an era as well. Starting next week, Dynamite moves to TBS, the better to free up more time on TNT for live sports. Like hockey, which is OK by me and I suspect many of you as well. In any case, this farewell broadcast, themed as New Year’s Smash, comes live from the spiritual home of AEW, Daily’s Place in Jacksonville, so let’s head there live for one last ride on TNT.

Jim Ross is back! Not only is the legendary announcer behind the mic again, but reports say he is cancer free, which is fantastic news.

Something to keep in mind: The faces have only Alex Abrahantes in their corner, while the heels have Tully Blanchard plus several additional members of the Hardy Family Office. This must be a special occasion because Hardy is letting Private Party actually wrestle in their ring gear instead of street clothes tonight. One really great part about a 10-man tag is that there are plenty of bodies out on the floor for aerial moves, something both Rey Fenix and Jungle Boy use to great advantage. Alas, Cage seems to be in business for himself, surprising Penta by tagging himself in at an unfortunate time, and FTR quickly hits the Big Rig to win the match.

Eddie Kingston, Santana and Ortiz vs. 2.0 and Daniel Garcia

Not that he ever isn’t, but Kingston is fired up and ready to get at 2.0 and Garcia before the bell even rings. I’ve mocked the idea of a feud being sparked by someone spilling coffee on another wrestler in another promotion years ago, but it’s sort of working here, so I’ll allow it. Also, it’s great that Kingston has something to do while Jon Moxley is out, and the push that these heels have been getting has been great. That continues here, with Garcia and 2.0 stealing a victory with a cheeky grab of the tights. Garcia grabs the ring bell and has Santana lined up, driving it home as Kingston is in no position to aid him. The damage is done, but Chris Jericho, who already has beef with the victors, runs out and chases them off with Floyd. Kingston and Jericho exchange some heated words, forcing Ortiz to step in to play peacemaker.

Winners: 2.0 and Daniel Garcia by pinfall

Calling himself one of the top ratings draws in professional wrestling, MJF mocks Sting for being an “untrained” wrestler and then quickly turns his verbal venom to CM Punk. Also, MJF tells Wardlow that if he wins the TNT Championship, he needs to turn it over to Friedman, producing the contract to back it up. I think a lot of people will enjoy Wardlow’s inevitable face turn and ass kicking of MJF. Sometime in 2022, I reckon.

The tension from the 10-man tag spills over backstage, and now it looks as if Jurassic Express and Lucha Bros. will wrestle for the tag team belts next week on TBS.

Somehow, Excalibur says Delaney has a chance to stop Wardlow’s 16-match winning streak and keeps a straight face while doing it. Impressive. Wardlow disposes of him quickly,

Kyle O’Reilly and Adam Cole talk out their ongoing issues from … um, somewhere else, with KOR noting that he’ll find out tonight if Cole has his back.

Out in the ring, Dan Lambert starts in on Brandi Rhodes, driving the Men of the Year into hysterics. He also makes fun of Cody Rhodes, apparently not getting the memo that Cody looks like he’s about to turn heel. Brandi isn’t about to let this go, calling Lambert a “less talented version of Paul Heyman,” though he prefers Jim Cornette. Brandi wants to know if Lambert wants to throw down, but Dustin Rhodes does the chivalrous thing and steps in. That proves to be a tactical error, as Ethan Page lays him out and the bad guys take a hike.

Cargill has the services of Mark Sterling on her side, and he wastes little time involving himself in the proceedings. This feels like a place for consummate professional to put over Cargill so there’s a face-heel dynamic in the final, but we shall see. Cargill hardly needs any help but gets it anyway when Sterling distracts the ref and someone dressed like a crew member sneaks in a shot on Rosa. Cargill gets the pin shortly thereafter, and as she and the mystery person lay in a post-match beating, the assailant reveals themself as Mercedes Martinez. Ruby Soho flies down to the ring with a metal pipe to drive the heels off, which is happening quite a bit tonight.

Believe it or not, CM Punk has yet to appear in a live show from Jacksonville since joining AEW. He’s changing that tonight, kicking off his microphone time by paying respect to J.R. Punk also says being at Daily’s Place gets him thinking about Brodie Lee, and that only people who never met him would try to minimize the impact he had. That, in turn, gets him thinking about someone who doesn’t want to be there, MJF. Calling him a “Twitter troll in the flesh,” Punk accuses him of hiding behind a keyboard or his Pinnacle flunkies. Since MJF says he’s done with Punk, CM admits that he wants to be AEW Champion as well, then sneaks in one more broadside by saying that MJF is “a bigger waste of Khan money than Tim Tebow.” He ends by cracking that it would be a real shame if someone interfered with MJF’s quest for gold, so one suspects this angle isn’t over yet.

Ricky Starks and Powerhouse Hobbs have some words for Dante Martin. Hobbs is fine with going another round with Martin, for what it’s worth.

Tony Schiavone gets a word with Brian Pillman Jr. about his run-in with Malakai Black last week. His attempt to come to his partner’s aid went for naught, but he sure isn’t giving up, vowing not to rush into the House of Black and promising a brand new Brian Pillman Jr. next week. The lights go out and Black appears on the ramp for a moment, then vanishes when the lights go out again.

The announcers fill in all the blanks on the connections between Cole and reDRagon, as well as how familiar O’Reilly and Fish are with Best Friends. Of course Cole and Cassidy have had their beef as of late too, and it’s probably not getting any better tonight as Cassidy finds new ways to do some in-match clowning. TNT gives AEW permission to go late with this match if needed, apparently, but I don’t know if my DVR is aware of that. Chuck takes a ridiculous bump going to the floor, and Trent seems quite OK with taking a beating even though he’s freshly returned from neck surgery. Cassidy looks like he has the match won with a diving DDT on Cole, then again with a Beach Break, but Cole’s teammates make the save. KOR goes for a big boot that accidentally catches Cole on the apron, which won’t likely make their relationship any smoother. Brandon Cutler and the Young Bucks run in and lend a hand, allowing O’Reilly and Fish to hit Chasing the Dragon to score the pinfall.

Even though they helped out, the Bucks yell at reDRagon about the errant kick, so it looks as if the battle for Cole’s loyalty is really and truly on. And with that, we bid adieu to AEW Dynamite on TNT and look forward to a new channel next week. See you in seven — on TNT!

One thing AEW has improved upon a lot over the last year or so is doing setup for upcoming shows while making that night’s broadcast excellent in its own right. Obviously, there’s an understandable desire to make a splash for next week’s network change, but TNT deserved a great goodbye, and it got one tonight. Onward to 2022!