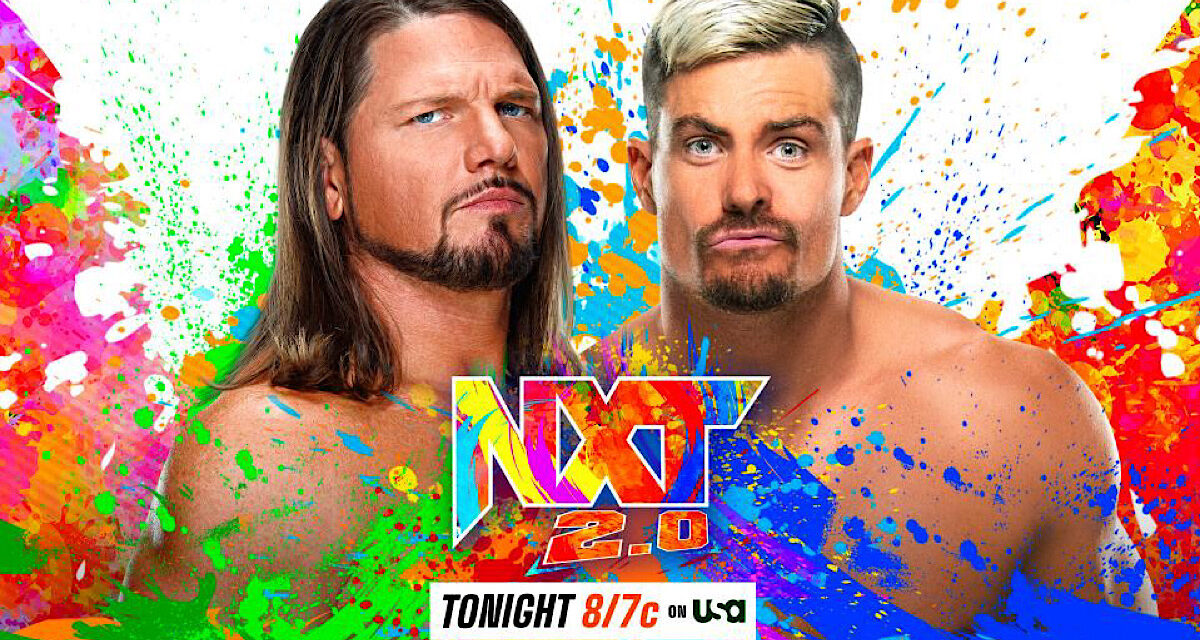 After splitting from Omos on Monday Night Raw, “The Phenomenal” AJ Styles took a side mission to NXT. Loudmouth Grayson Waller got Styles’ attention on social media, and the latter attempted to cool the cockiness in tonight’s promo battle. But unless the confrontation leads to a future matchup, Styles’ appearance was simply a vehicle to promote the new face turn.

Opening tonight’s episode, NXT Champion Tommaso Ciampa called out Bron Breakker, laying down the challenge for January 4 at New Year’s Evil. “It’s too much too soon” for Breakker according to the champion, who showed conceit before slapping the challenger. But level-headed Breakker stood tall: “Blood is in the water. This shark is gonna eat you alive.”

Between the Ciampa-Breakker opening segment, social media promo from Grayson Waller, and backstage brawl between Gonzalez and Kai, NXT is unconventionally starting out strong. The competitors weaponize their backstage surroundings and relocate through the parking lot to the ring during picture-in-picture. Gonzalez practically shrugs off a brutal double-stomp through a garbage can, recuperating enough to powerbomb Kai onto the steel steps and can for the pinfall victory.

Waiting through a commercial and a Tony D’Angelo video package is Gonzalez, who called out NXT Women’s Champion Mandy Rose. The patience is really commendable. But instead, Cora Jade appears to initiate a dry argument before Rose actually appears on-screen. Rose announces a championship triple threat as Toxic Attraction’s Gigi Dolin and Jacy Jayne attack the challengers in-ring. NXT made it a solid thirty minutes before Toxic Attraction obligately butted in.

Joe Gacy and Harland publicly apologize for hospitalizing (The) Brian Kendrick last week — well, not quite. Gacy blames Kendrick for triggering Harland and hopes that “everyone will learn and grow from this unfortunate event.”

Brothers Brutus and Julius are clearly talented grapplers; they just painfully lack zest. Grizzled Young Veterans are in control when goofy goobers Kushida and Ikemen Jiro arrive with a Jacket Time-branded announce table before commercial. Next comes Josh Briggs and Brooks Jensen as Julius makes the comeback, but Jacket Time’s hilarious Japanese Statler and Waldorf gig is more entertaining. The match explodes into an eight-man brawl, which obviously results in a no-contest.

“My name is Tricky B. Williams. And the B stands for ‘Baby, if you don’t know, you better ask somebody,” poorly explains the man himself. Dexter Lumis hijacks the backstage TV screen, somehow, and scares off Williams before their matchup.

Legado del Fantasma argues with Zoey Stark and Io Shirai over the rehab table. Elektra Lopez steps up to Shirai, but LDF in whole backs away.

Lumis is unfazed opposed to Williams, who is very fazed. Meanwhile, Diamond Mine is watching atop the balcony, and Roderick Strong eventually sends Hayes away. Williams showcases — for lack of a better term — his very limited offense on Lumis, who makes the comeback thereafter. Lumis ducks the shoe shot, cinches the finishing choke, and gains the submission victory. Like the male counterpart to Toxic Attraction, Grayson Waller’s screen time is very abundant. He blindsides Lumis with a steel chair, but on-screen, tonight’s special guest arrives.

WWE formatting continues to baffle, as a Pete Dunne video package plays amidst an intriguing angle. Waller, like Raquel Gonzalez earlier, has patiently been waiting in-ring throughout commercial.

“The Phenomenal” AJ Styles finally arrives to huge fanfare, interrupting a promo from Grayson Waller. The hype simmers when Waller confidently outclasses Styles on the stick, but the former retreats from a fight. “You had a good three weeks, and you think you’re a superstar? Try being phenomenal for twenty-plus years,” is Styles’ hitting line of note. The segment was clickbait in broadcast form, basically.

Riddle and MSK’s coming-of-age segments continue with scooter lessons. In their RK-Bro gear, the three scoot around before crashing into a car. Next week, with the help of Riddle, MSK will call out NXT Tag Team Champions Imperium. Later, Imperium responds backstage: “They may have found a shaman. But we have a General.”

Shirai hits her signatures — Tiger Feint kick, missile dropkick, and running double knees — before Lopez reverses. The bold, bland, and black-clad Xyon Quinn interrupts the match with a mistletoe for Lopez, but Santos Escobar makes the block. Shirai capitalizes with her finishing top-rope moonsault, so at least this was short.

In a neck brace, Brian Kendrick responds to Joe Gacy’s “attempt at an apology.” Revealing that he’s resigned as a coach, removing the neck brace, Kendrick issues a challenge to Harland for next week.

The D’Angelo persona is making a splash, and his overhead throws against “Petey Poppins” are proving his in-ring worth too. During picture-in-picture, Dunne takes control with joint manipulation and cinches a triangle thereafter, but D’Angelo recuperates with persisting suplexes. Dunne comes back with stomps and trades blows with D’Angelo, but the latter grabs a crowbar. Dunne ducks, applies an armbar, and snaps D’Angelo’s fingers; he delivers the Bitter End and gains the pinfall victory.

But D’Angelo doesn’t accept the loss. He instead blindsides Dunne, attacks him ringside, and smashes his fingers with the crowbar. D’Angelo stands tall as the lower third signals the end.

It was an above-average episode for NXT 2.0, with its headline matches faring well. Even the middle-card bouts did their duties in quick fashion, and it went by quickly. Personally, the Styles-Waller confrontation was a little lackluster, but it’s a step in the right direction having main roster names interact with those in NXT.