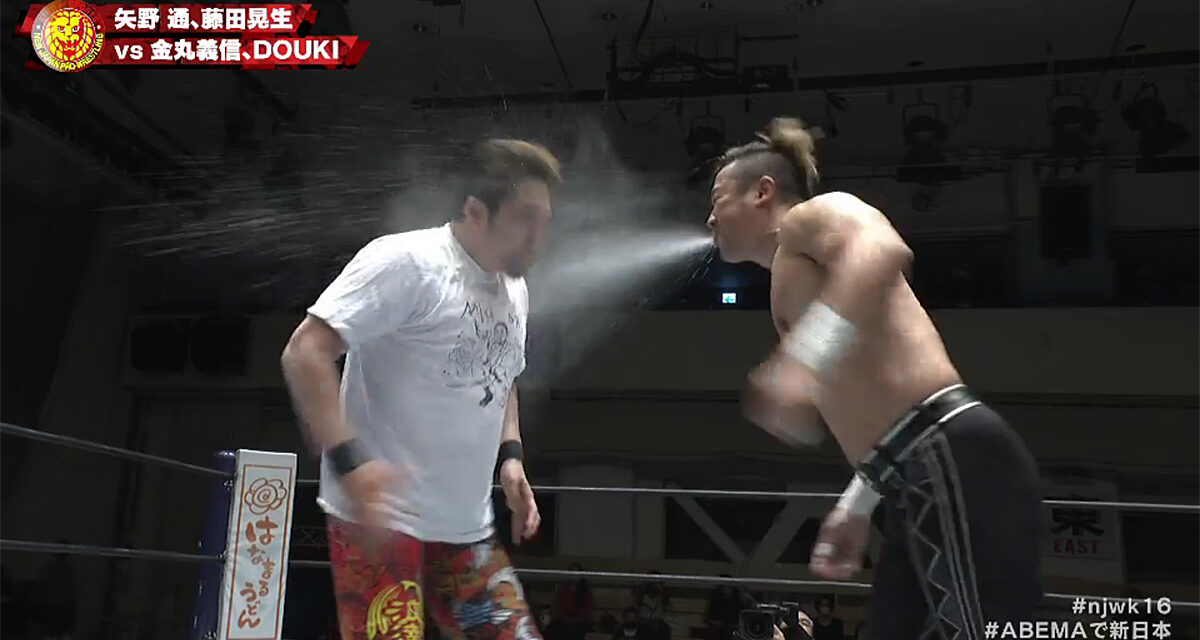 Wrestle Kingdom is on the horizon and NJPW is boosting all of the match-ups and all of the angles at its four Road to Tokyo Dome events before the big three day show in January.

The match between Kosei Fujita and Toru Yano versus Suzuki-gun (Yoshinobu Kanemaru and Douki) tonight was used though to promote the upcoming KOPW match between Yano and Kanemaru. The two meet in the final KOPW 2021 match, an End of Year Party Rules bout at the final Road to Tokyo Dome event on Christmas Eve.

The KOPW title is a provisional one with the yearly champion only being declared after the last KOPW defence of the year. The End of the Year Party Rules match will be Yano’s final defence of 2021. In that match, both wrestlers are required to take a drink at two minute intervals. After beverages have been downed both wrestlers will have to respond to the referee’s 20 count. Should a competitor fail to respond they will lose the match, in addition to victory earned via pinfall, submission, disqualification, etc.

In tonight’s tag match while Douki tied up the official in a corner arguing nonsense Kanemaru took a swing at Yano with his whiskey bottle. Kanemaru missed and was thrown into a corner missing its turnbuckle pad courtesy of Yano. 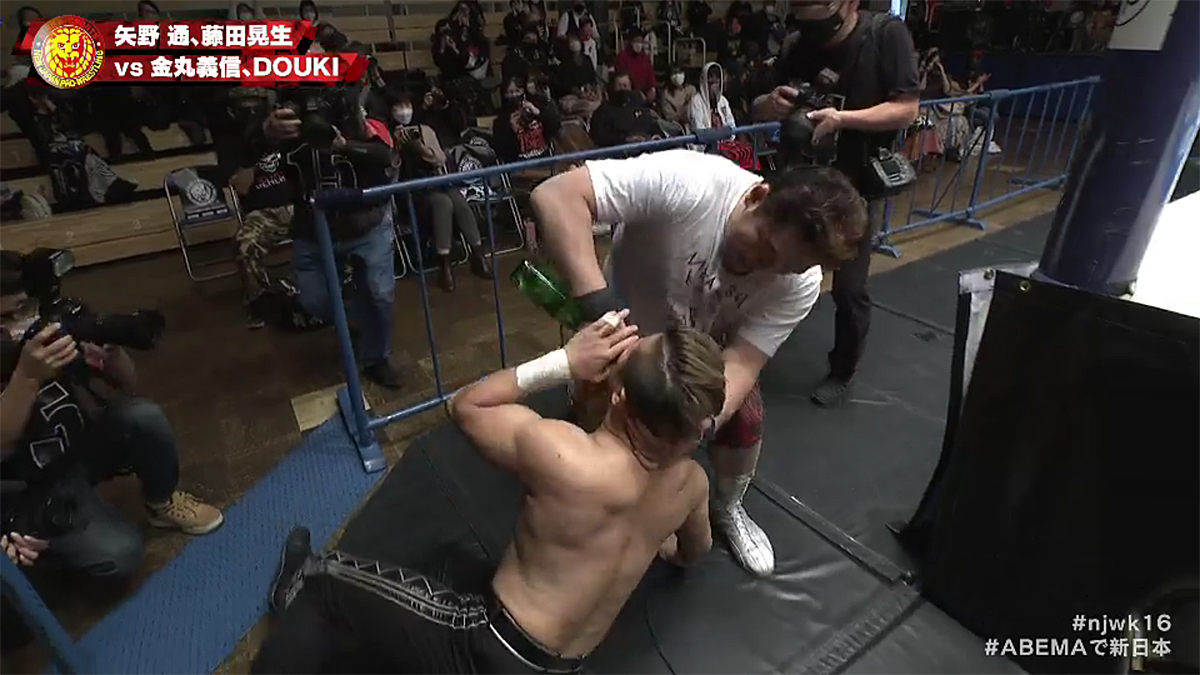 Yano gives Kanemaru a taste of the bubbly. Courtesy: NJPW.

Yano picked up the whiskey bottle, smiled and threw it away. Yano took Kanemaru to the floor, heaved him into the barricade and pulled out his own bottle of booze from under the ring. Yano poured booze all over Kanemaru and down his throat.

Back in the ring, Yano took the top off the bottle again. The official gave Yano a warning. Yano shoved him away. Yano poured more down Kanemaru’s throat. Yano was in for a big surprise though. When Kanemaru got to his feet he spit booze into Yano’s face and eyes blinding him. Douki made Fujita submit to his Italian Stretch #36 submission to notch the victory for Suzuki-gun.

Evil bashes Oiwa in the head with Ishii’s NEVER Openweight Championship belt. Yujiro pins him easily. After the match Sho choked Yoh out on the floor and Evil attacked Ishii some more.

Taka proves to be the weak link again. He is pinned by Hashi and Goto’s Shoto. 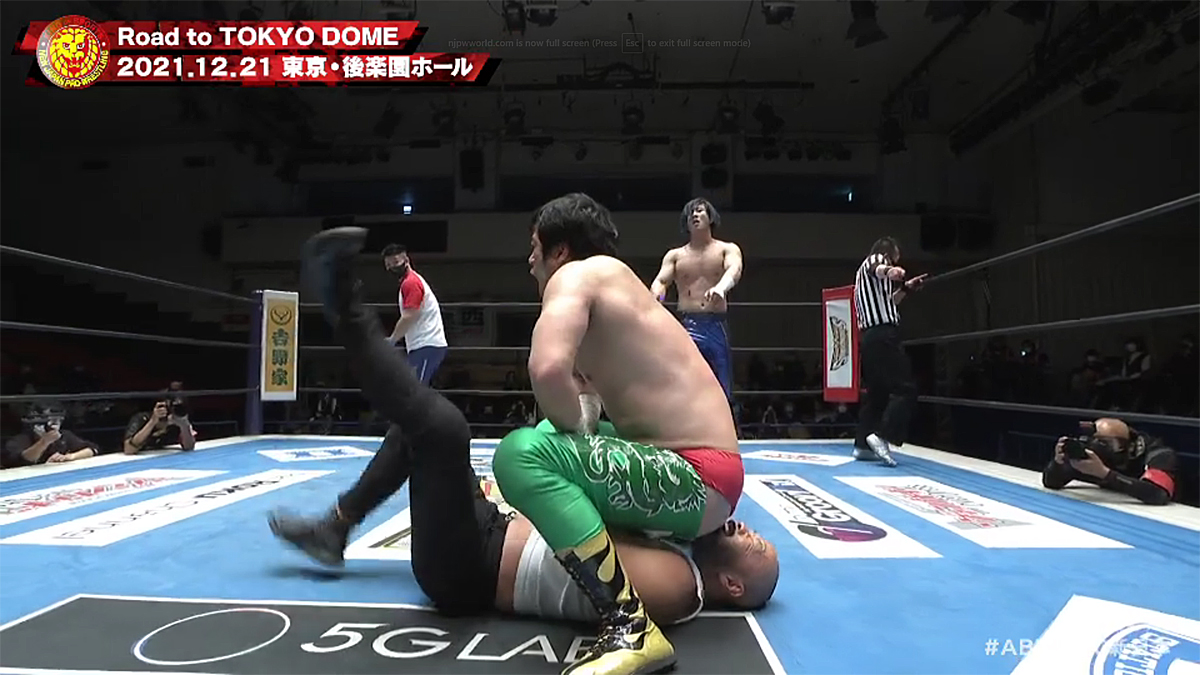 Goto gets what he deserves. Courtesy: NJPW.

Taguchi pulls down his trunks to reveal red underwear and a new weapon: Mega Funky Weapon. Tanahashi makes Goto tap out to the cloverleaf. Taguchi gives Goto a taste of the Mega Funky Weapon at the end of the match.

Shingo gets the win by putting Eagles away.