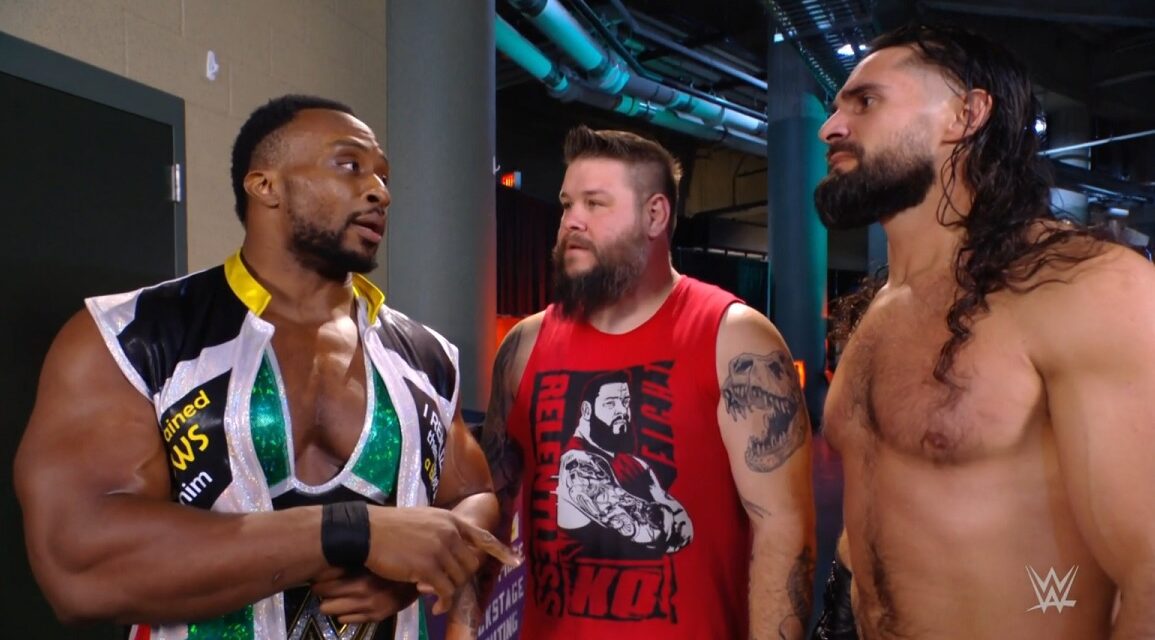 I have a confession to make: My ‘e’ key on my laptop is broken. That makes it difficult to recap three hours of pro wrestling, but I’m going to soldier through, because you, dear reader, did not watch WWE Raw on Monday night and need to know what’s going on. That’s just the level of service you’ve come to expect from Slam Wrestling. In any case, there’s plenty of potential Day 1 intrigue to be had tonight, so let’s go live to USA and check it all out.

A disrespected Bobby Lashley is a force to be reckoned with, and as he notes to open tonight’s show, last week he showed everyone what that means. MVP says Lashley is like the Candyman, except you only need to say his name once and Lashley will arrive to make bad things happen. While the younger generation of superstars whine, Lashley simply makes statements. He simply must be added to the main event at Day 1, as it’s the proper way to start the new year. Kevin Owens retorts by saying that he hasn’t been paying attention to Lashley for two years, and that he hasn’t earned his way into the match like, much as it pains him to say it, Seth Owens. Speak of the devil, he actually agrees with KO for once, prompting Lashley to invite them both to do something about it. They seem a little hesitant, but WWE champion Big E is not, running down the times he’s already defeated the All Mighty. Not so fast, though, because Adam Pearce and Sonya Deville think the Fatal Four-Way is a great idea … but only if Bobby can defeat all three of the other combatants in singles matches tonight. MVP says his man accepts, but even Corey Graves thinks that might be too much for Bobby.

Earlier today, Randy Orton checks in on Riddle, who says he has been watching a lot of tape — though not exactly of their potential opponents at Day 1. Can he be focused on defending the titles? It doesn’t sound like it. No broadcasting, no podcasting and no shamans, Orton says, but Riddle seems like he wants to be in the Jackass crew instead. Orton tries bargaining instead, saying that if Riddle beats Otis tonight, he may let him wear the blazer again someday.

Big E, Rollins and Owens try to sort out with Pearce and Deville who is going to face Lashley first. KO falls on that grenade, while Big E vows he will leave Day 1 with his belt no matter how many opponents are vying for it.

The announce team puts over the idea that Gable has focused Otis the way Orton is trying to do for Riddle. Early on, it looks like the Alpha Academy teachings are paying off big time, while the Viper can only play cheerleader. A Riddle rally finally knocks Otis off his feet, but he gets planted while looking for the RKO and Otis gets the dub. Orton rushes in and RKOs Gable, but Otis smashes Randy with a big elbow in response.

Lots of themes going on here; Doudrop jealous of Bianca’s success, Belair perhaps taking pause at someone she can’t overpower, and more. Doudrop gets to carry the majority of the offense, keeping Belair slowed down and on defense. But she makes a mistake trying to go up top, where Belair powerbombs her and hits her own aerial move to wrap up a victory.

Belair tries to celebrate her win on the stage, but Doudrop comes from behind and lays her out. Looks like this feud will roll on.

Asked for a word before his meeting with Lashley, he says the whole situation (and St. Paul) is trash. But he is looking forward to getting past this and winning the title at Day 1.

Lashley and MVP stop by and show their respects to Gable Steveson, who is in the front row with his +1, his Olympic gold medal. The All Mighty gets off to a quick start, and not just with his power as he dodges KO’s running cannonball off the apron. Jimmy Smith feels maybe Lashley got complacent at times in the past, and while Graves disagrees, the narrative of him being highly motivated is in full swing. Owens realizes he should live to fight another day and taps out before Lashley can even get the Hurt Lock fully applied.

Rollins is furious that Owens “didn’t even try,” but Deville stops by to tell him he’s next to face Lashley. And a video package recaps the ongoing issues between Becky Lynch and Liv Morgan.

Lynch heads to the ring to point out the irony in the fans’ shifting desires. They wanted Becky back not long ago, but once she returned, they all had opinions about “how she does her job.” When you don’t evolve, you get left behind and disappoint all your fans … just like Liv did. Morgan comes out to say that though Big Time Becks thinks people would doubt Liv if she won, the only person doubting her now is Becky. Even though Morgan cried after losing last week, it was only because she knows she can beat Lynch. If she’s really Big Time Becks, she’d accept a rematch at Day 1. After more taunts from the champ, Morgan rushes the ring, which proves to be a tactical error as Lynch beats the tar out of her. Becky does accept the rematch, at least.

AJ Styles is asked about the recent squabbles between him and Omos. He calls them growing pains and is not ready to throw in the towel on their partnership yet. Omos drops in and seems to feel the same way.

Reggie is asking out Dana Brooke, maybe? But he’s also helping her fend off disguised challengers for her belt, including R-Truth and Akira Tozawa.

I’d start a drinking game to take a shot every time the announcers say “Dirty Dogs,” but I’d be smashed by the early commercial break. Balor and Priest are a fun pairing, and I wouldn’t mind seeing them stick together. Alas, a distraction from Austin Theory comes at an inopportune time, and Ziggler pins Balor with a Zig Zag while Theory gloats his way back up the ramp.

Nikki A.S.H. gives Rhea Ripley a pep talk but sounds like she’s the one who needs one. Ripley isn’t giving up on her, by the sound of it, still believing in her spirit and talent. Such a wholesome segment.

Zelina’s gimmick is surprisingly entertaining, at least to me who hasn’t seen it much yet. Also, Zelina beats Ripley in like 3 minutes thanks to some unfortunate attempted assistance from poor Nikki.

Owens wants to accompany Rollins to the ring, but Seth says KO’s plans rarely work out for him and heads out to the ring solo.

Wait, maybe KO is smarter than everyone! He comes out and assaults Rollins at ringside, meaning Seth wins by DQ. Pearce and Deville admit that it’s clever, but they restart the match and declare that this and any other match Lashley has tonight will be no disqualification. Bobby immediately spears a distraught Seth and pins him. Good game, good effort.

Theory goes to show Mr. McMahon his latest selfie, but will it impress him? “You’re not my friend,” Vince says. “I don’t have any friends, because I don’t want any friends.” He’s probably telling the truth, to be honest. Vince offers a very confused Austin an eraser. I don’t know either, man.

Maryse joins The Miz in the ring for his pitch to induct someone into the WWE Hall of Fame next year: The Miz himself. That’s very on brand for him. He and the Mrs. have a toast to ending Edge’s career for good, which brings him down the ramp and into the ring. Edge says Miz would get all of the accolades he could ever want if he would just shut up, and that his bravado is just to cover up his insecurity. At the end of the day, Edge is going to have to teach Miz a lesson at Day 1 and knock the constipated look off his face. That starts a brawl that ends with Maryse slapping Miz for using her as a human shield. That’s low, even for him.

KO and Rollins stop by to rally Big E, though he makes it clear he wants no assistance from them. Stay far away, he yells before heading for the ring. You know … I don’t think they’re going to listen.

Roman Reigns returns to Smackdown on Friday. Did he ever really leave?

For some reason, Lashley and MVP are informed this next match is no DQ, even though they were totally out there when Pearce and Deville announced that.

It doesn’t take long for tables and chairs to be brought into play (no ladders, alas), but it’s Lashley who tastes some steel first. You don’t think Owens and Rollins might ruin this somehow, do you? No, surely not. The All Mighty takes it to the champ outside the ring and gets out some more tables. Because why not? Big E catches him with big shots on the apron, but a knee stops the WWE Champion in his tracks and Lashley slams him through a table in the ring. He kicks out at two and we head to a second commercial break. Big E battles back with a nasty slam of Lashley off the steps, but Lashley responds with a spear in the ring. Owens and Rollins choose that moment to run down and attack Lashley, but Big E fights them both. Lashley has to be loving this, running over to scrap with everyone. Big E slams Owens through a table on the floor right before Lashley spears Rollins through another table set up in one corner. As Big E confronts Lashley, MVP runs in and smacks him in the knee with his cane, gift wrapping the win for Lashley. He’ll be in the main event at Day 1 after all. Surprise, surprise. Wink, wink.

Maybe this is just me because I’ve been watching pro wrestling so long, and Raw in particular, but this was a perfectly fine show made just a tad worse because everything got telegraphed so far in advance. As soon as the stipulation was made, you knew Lashley would run the gauntlet and make it into the Day 1 title picture. Still not without its fun moments, at least.