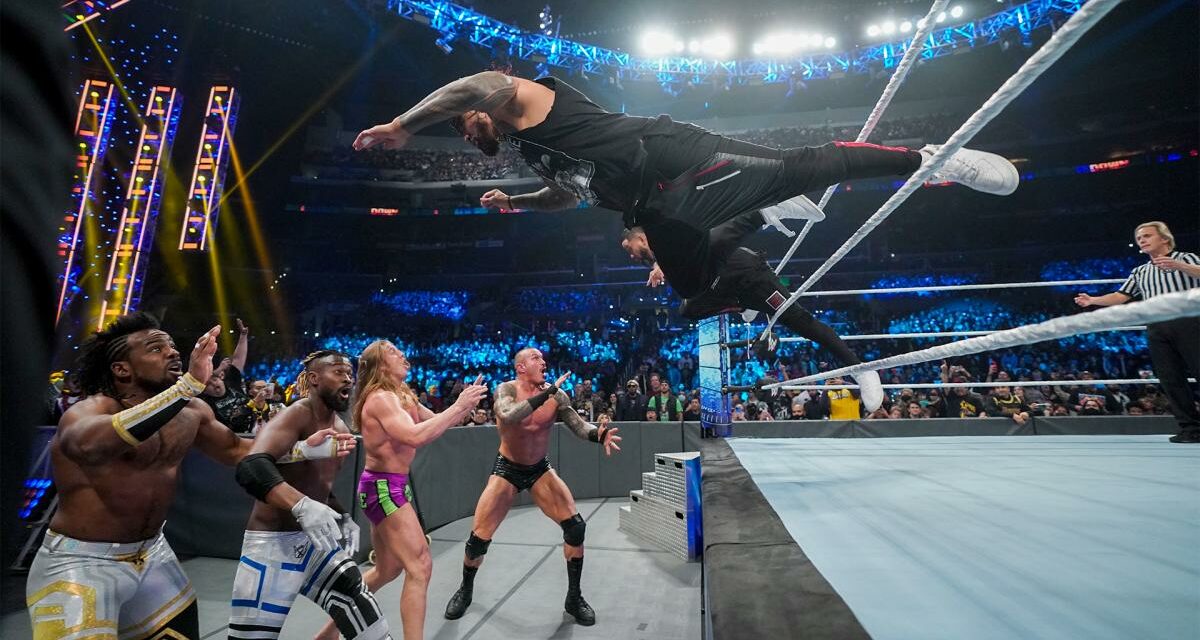 Although there’s more talking than wrestling, SmackDown at least succeeds this week in a surgeon’s oath kind of way: it does no harm to watch it.

Remember when Sami Zayn was the number-one contender for the Universal Championship? Yeah, that was just one week ago, and Sami is now back in full comedy mode, in a wheelchair with a couple of buff nurses as he threatens to sue the WWE, Brock Lesnar, Adam Pearce, Sonya Deville … everyone.

One of those threatened by Zayn is Paul Heyman, who walks out and interrupts Sami’s rant. After engaging in some mildly awkward Jewish/Syrian testiness between them, Zayn threatens Heyman as he knows for a fact that Roman Reigns is not here so there’s nobody to protect him.

Except for, maybe, Brock Lesnar. Out comes the ponytailed, overalls-clad Beast, grabbing a chair and sitting across from Zayn and telling him that everything he did was to protect Sami. From one Canadian Alpha-Male to another, says Brock, he wants to just get away from this place and go hunting with Sami in Saskatchewan (Zayn says he’s a vegan). Lesnar continues and says they should do something more fun and enjoying (not how you use the word). 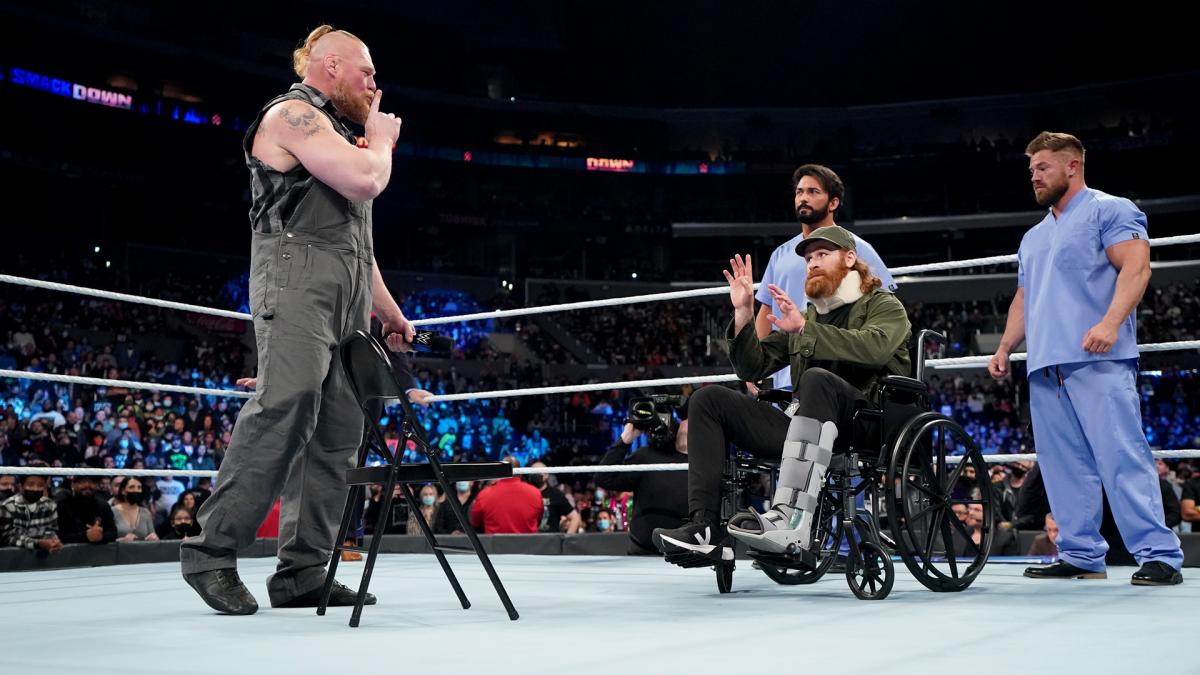 Shouldn’t it be someone shushing Lesnar whenever he has a mic in his hand? Photo: WWE

Heyman erupts, demanding to know why Lesnar is putting up with all of this when three years ago his former client would have destroyed everyone. This is seemingly enough to activate Lesnar’s training as he attacks first Zayn’s nurses and then Sami himself as Heyman looks on with a mischievous grin.

After the break, Kayla Braxton tracks Lesnar down backstage and wants an explanation, but Lesnar simply suggests that she ask his advocate Paul Heyman.

Boogs runs right through Carrillo immediately, beating him to the mat before beating his own chest. Garza tries to intervene, but Boogs simply flips him into the ring and presses him over the ropes to the floor. Nakamura tags in and a stiff knee (not really a Kinshasa) on Carrillo ends the match before it begins.

Backstage, King Woods unveils his new crown to a small crowd. Not much happening there. Elsewhere, Drew McIntyre enters Adam Pearce’s office wearing only his wrestling tights and brandishing a sword, which is how all rsspectable negotiators present themselves. Pearce passes the buck, saying that Sonya Deville made the list that left McIntyre off of the Black Friday battle royale. Pearce also tells Drew that he’s not allowed to bring his sword to the ring. Sensible.

Before we get to his match, though, Sasha Banks is with Toni Storm and pumping her up for her contest with Charlotte Flair later tonight.

The bell rings and the fists start flying, and some chops immediately leave Sheamus’ chest beet red — mind you, that probably happens to him when he puts on his seatbelt. Sheamus returns the favour before the fight spills to the floor and McIntyre tosses Sheamus with a belly to belly going into break. 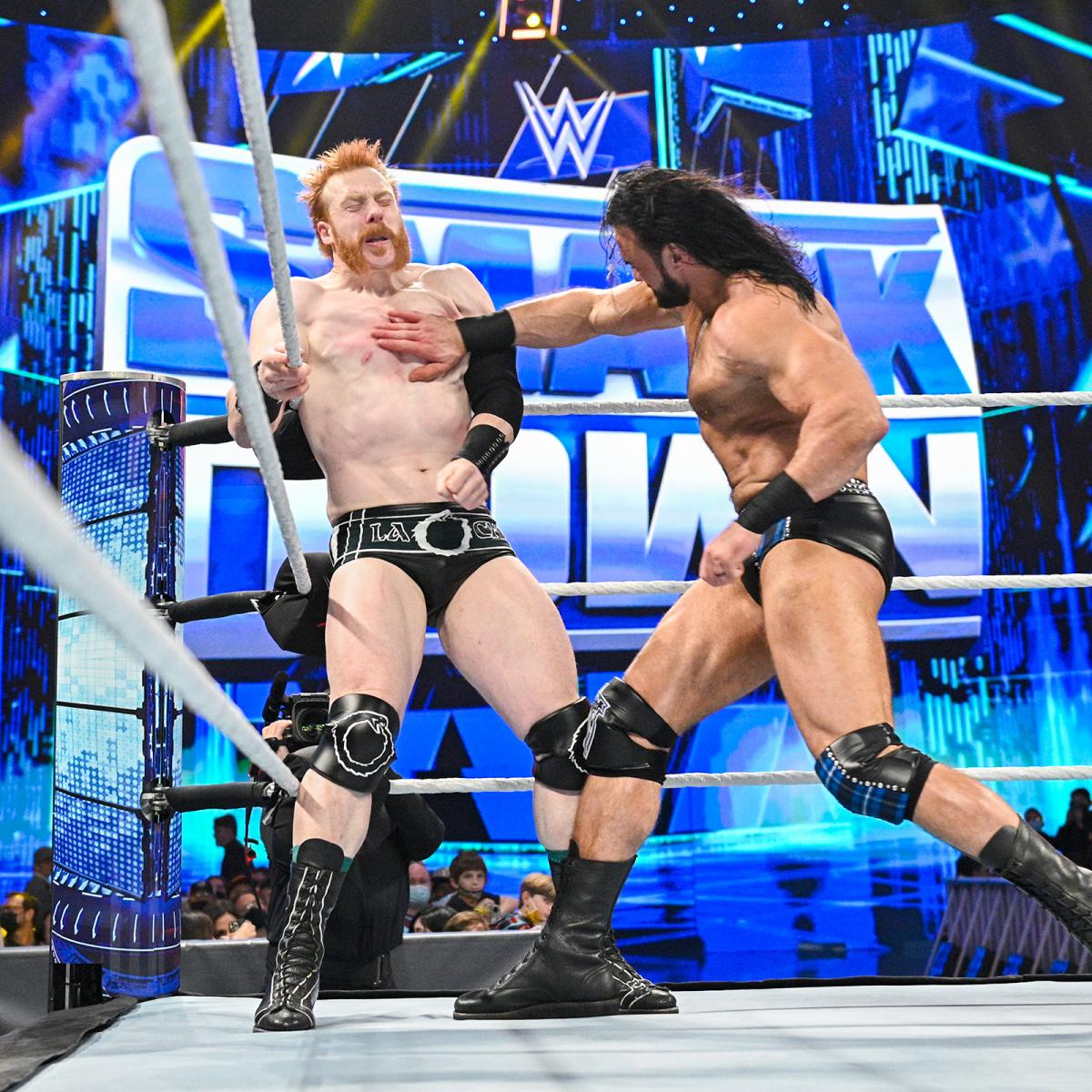 This would make a good poster for a new “Don’t Try This at Home” campaign. Photo: WWE

Back from commercials, an Irish Curse backbreaker only seems to pump McIntyre up as he responds with a Future Shock DDT, but Sheamus blocks an oncoming Claymore with a high knee. No matter, after an exchange of headbutts, McIntyre bounces back after an Irish whip with a Claymore for the win.

Michael Cole introduces a retrospective package of Blackjack Lanza, deceased this past Wednesday at 86 years old. Afterwards, Kayla Braxton approaches Heyman and asks him straight up if he is back in the position of Lesnar’s advocate and, if so, how Reigns will feel about it. Heyman is stuck for an answer.

Deville starts off by making a couple of announcements: Natalya will serve as guest ring announcer, and Shayna Baszler as guest timekeeper. Before the bell rings, Naomi ducks to the floor and takes out both of Deville’s cronies. Deville slips out to the floor as well and sends her compatriots onto the apron to surround Naomi, who could really use a saviour right now.

Out comes Xia Li to join Naomi in the ring as they rchase off all three of their opponents, sending them scurrying towards the back.

We’re backstage again with RK-Bro and the cast of the new movie Jackass Forever. Riddle is a big fan, while Orton, as usual, resembles Sam the Eagle from the Muppets, wondering why he’s even there.

Remember those contests where you had to win one in order to have a chance to win the contest later? Of course not — that would be stupid, like these Championship Contender’s matches.

Flair starts hot with a right hand, but Storm fights back with some universal rules-defying running of the ropes and a light kick to the head. Flair responds with a stronger kick and a big smile before climbing to the top rope for her patented “nowhere close” moonsault, missing it, and Storm comes back with a German suplex. 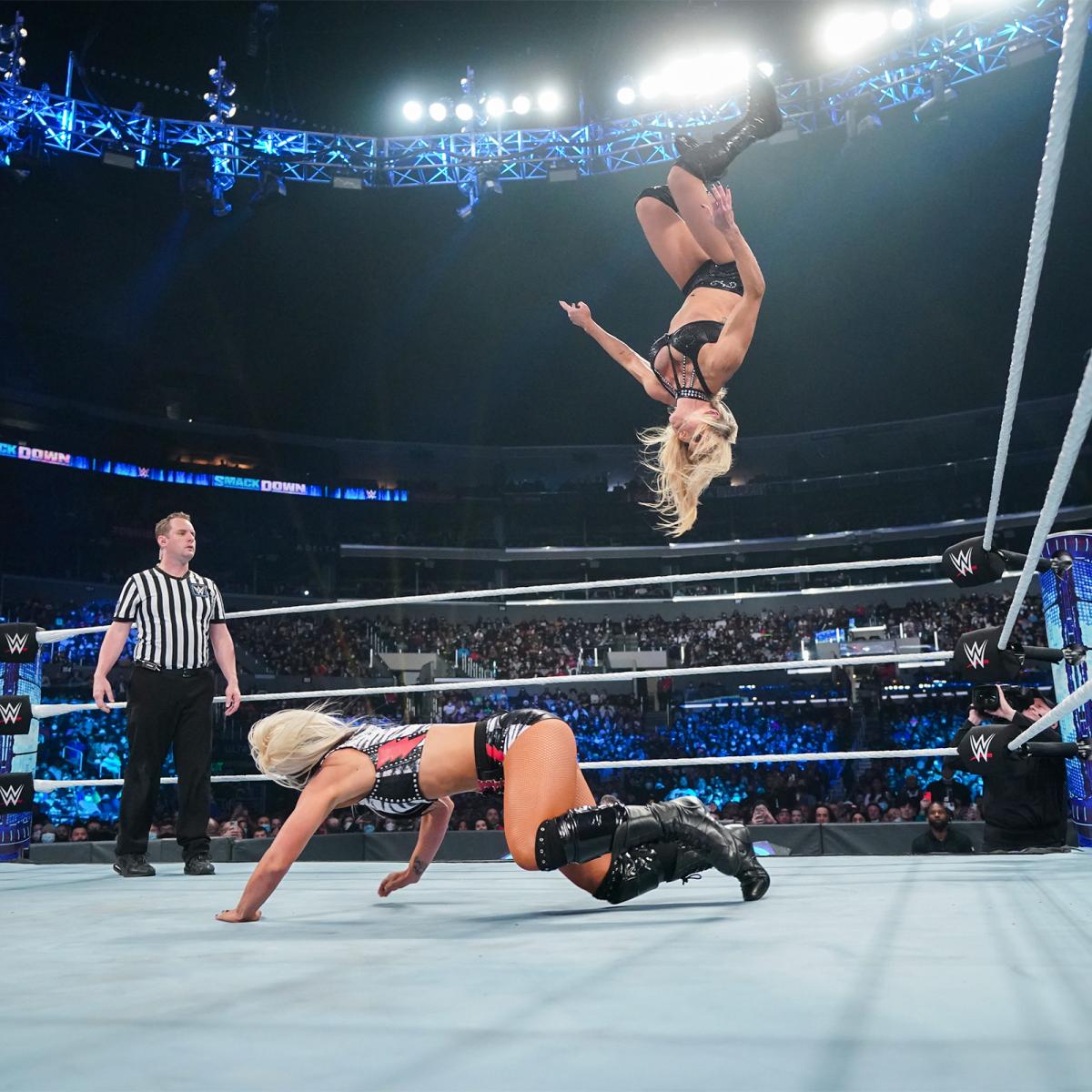 Flair clotheslines Storm across the top rope from the apron before running her into the ringpost, then driving kicks into her while the ref counts to five, then calling it a DQ.

After the bell, Flair drops Storm with a big boot. So … does Storm get her championship match because she won? The announcers make no mention of the impact of this match.

Backstage, Brock Lesnar approaches Adam Pearce and thanks him for his suspension as it allowed him some time to go hunting. He wants to show Pearce a picture of the moose he killed and ate on his phone, but struggles with the flip-phone before breaking it. He doesn’t seem all that sincere in thanking Pearce.

Remember how Survivor Series is touted ad nauseum as the one night a year that Raw and SmackDown wrestlers meet in the ring? How do they say that kind of stuff with a straight face?

Kingston and Riddle take the first turns in the ring, and a dropkick by Kingston allows him to tag in Woods and they double-team Riddle with a succession of kicks and elbow drops. Riddle misses a kick while Jey tags himself in off of Woods, and the Uso brothers dive together over the top rope to take out everyone else.

Back from a break, even though it feels like we just got started after ages of entrances, Jey and Riddle are duking it out but Jimmy tags in blindly on his brother to help deliver a double beat down of Riddle in their corner. Orton tries to interfere, but that only distracts the ref and allows the Usos to run Riddle into the ringpost on the floor.

Jey gets back in and Riddle dodges his corner splash, nearly allowing him to get a tag to Orton except Jimmy pulls the Viper down from the apron at the last second. Whew, so much wrestling: time for a commercial break.

When we come back, Riddle is still in there getting a double-team beatdown from the Usos. Unless their camerawork missed showing a tag, Kingston enters the match illegally to stop another tag from Riddle to Orton, before tagging in Woods (not legal, due to Kingston’s unlawful entry).

Woods delivers a lovely suplex on Riddle and kicks his legs out from underneath him, but Riddle kicks his way past the New Day and crawls to his corner, finally tagging in Orton who gets a few moments to deliver some of his signatures. Jey slips away from an RKO, but Jimmy takes one instead. Woods blindly tags himself in off Orton while this is happening and the New Day finish Jey off with their double stomp finisher.

In my mind, however, this win doesn’t count unless I can see proof of Kingston tagging in earlier.

This episode was 100% better than last week’s, which is not great. It’s another in SmackDown’s run of “just okay” shows. which is almost a worst spot to be in than to be really bad.