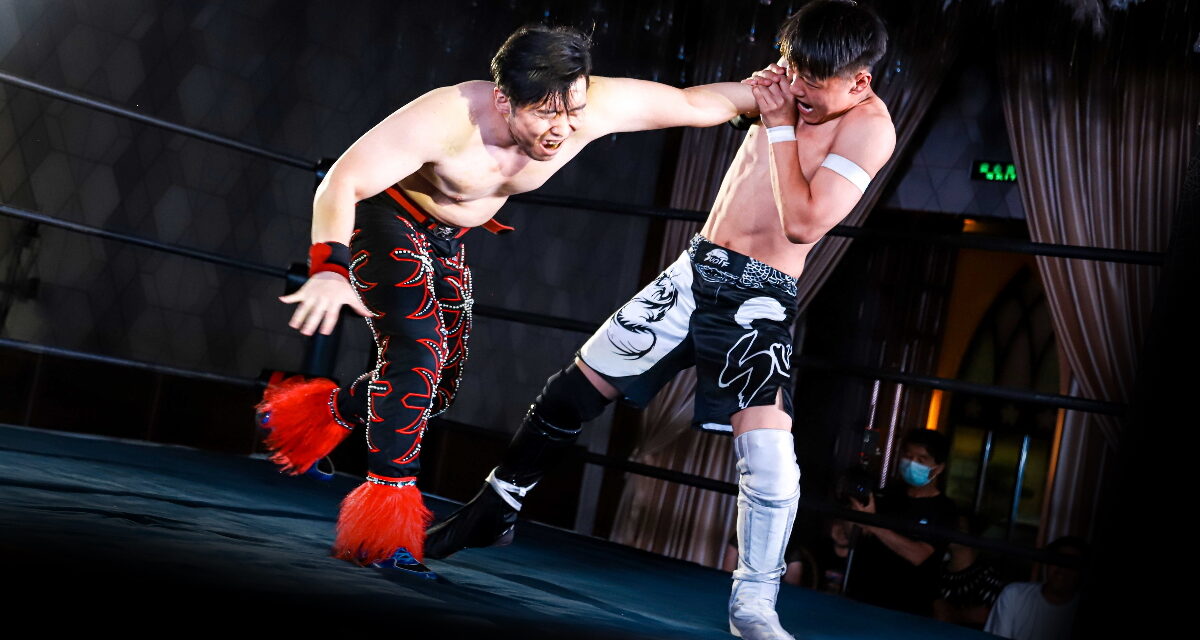 Things start off with a cold open promo getting us ready for the Supreme Societies championship main event. Little Johnny stands behind MKW champion Coldray as he speaks, saying that while Wangtao was indeed able to win The Coldray games, the game ends tonight for Wangtao when Coldray crushes his dreams.

Hui offers a handshake to start but instead get a slap from Steve. This leads to Steve getting the better of three lockups and then Cui answering back with all of the moves Steve gave him, returned in rapid succession, causing Steve to take a breather on the outside.

Steve takes his time out there to such an extent that Cui holds the ropes for Steve to enter. Steve accepts the invitation but boots Hui on his way in taking control. 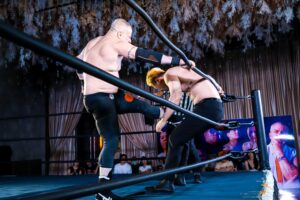 Steve the ESL Teacher boots Herwin Cui in the corner.

Steve punishes Cui with mostly rule bending tactics. Cui recovers after bouncing off the ropes. After a forearm exchange and double line Steve briefly shows hope of turning things around but gets backdropped and STO’d.

This match is from May 25 2021 – a never before aired event called “IBEW x MKW: The Foundation” in Shenzhen. For the next few weeks, we’re going to see matches from this event for the first time on MKW Blast-off.

This match is a fast paced whirlwind of high flying chaos. The audience is more lively than any MKW crowd I’ve ever seen.

Voodoo and Ash are displaying a lot of drama as on again off again allies and enemies while Chen and Wang are more straightforward taking on whatever situation is before them.

Wang is able to get the best of both Voodoo and Ash when they go for a top rope double team and he ends up stacking both men on his shoulders in a double Samoan drop. Afterwards Chen catches him off guard with a series of high flying attacks culminating into a code red for a nearfall.

Voodoo and Ash overwhelm Chen with innovative double teams of their own including a doomsday 619. 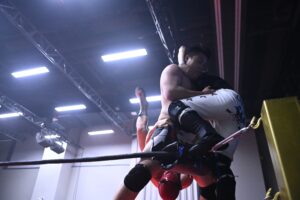 Voodoo powerbombs Wang as he suplexes Chen in the tower of doom.

Ash takes control but is taken out before the other three crash in a tower of doom.

Tao receives the fruit of his Coldray games victory here and now in the biggest match of his short career, slingshotting himself into a lengthy, intriguing, high steaks main championship event narrative.

Before they lock up Tao plays to the crowd for support which they give him easily. They chain hold for hold in sequences that end with Ray getting the short end, leaving him frustrated. Soon Tao is in full control hitting a standing frog splash. But Ray answers back with fury when he plucks Tao out of the air as he attempts a corner splash.

Ray changes gears to an intensity rarely seen, he is pissed as the crowd chants Wang Tao. A frankensteiner off the ropes allows Tao to even the odds and the two exchange blows with Tao winning out and then landing a release German suplex but a reversal into a modified sliced bread #2 does the same back for Ray.

The intensity continues as the two hit and reverse the most impressive moves in their respective arsenals. A varied Ki crusher nearly scores Tao victory but Johnny pulls out the ref as he makes the count.

An incensed Tao leaps to the outside onto Johnny but just like the Supreme Society leader, Johnny catches him and then slams him on the apron allowing Ray to hit the lung blower for the win.

This episode definitely builds to the main event. Things start off a little weak with the first match but the four way was quite good with some innovative stuff and the main event delivered on the story and left me looking forward to the next chapter.