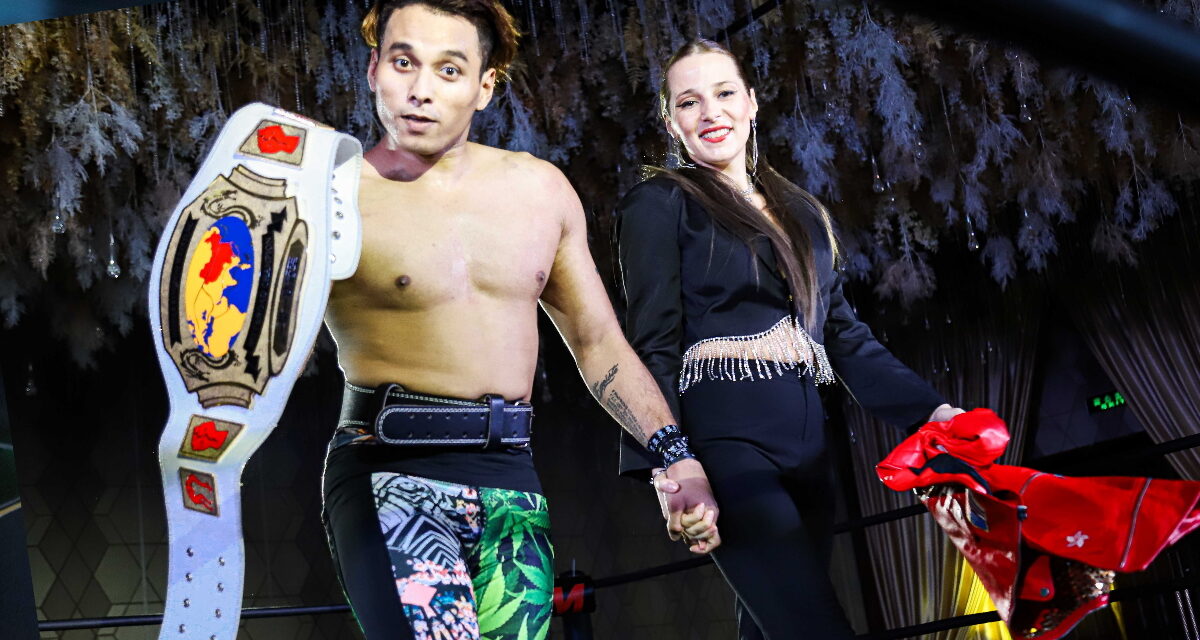 Things start with a backstage message from the Irish Whips, a warning  for the Tag Team Champions C2NY that they are coming for their titles. We immediately cut to a response from the champs who say they didn’t forget about what happened last week and tonight they will regret it.

Money and Poseidon start off. Money mocks his size but then gets lit up by the diminutive Luchador who takes control with speed and technique overcoming Money’s brute force attempts. Plata comes in and shows off some aerials of his own. Poseidon returns and has Money in trouble with a near fall after a legdrop that Sam broke up. Money finally stops Poseidon with a big belly to belly.

Sam and Money showcase their power individually and in tandem on Poseidon and even Marie gets some licks in behind the refs back.

Poseidon ends up being able to tag after a series of dropkicks on Sam. Plata hits a missile dropkick of his own but the wiley Sam puts him down with a big line.

Sam and Money pick up the win thanks to attacking both Mascaras simultaneously. Sam hits a huge crucifix powerbomb for the pin while Money spears Plata. 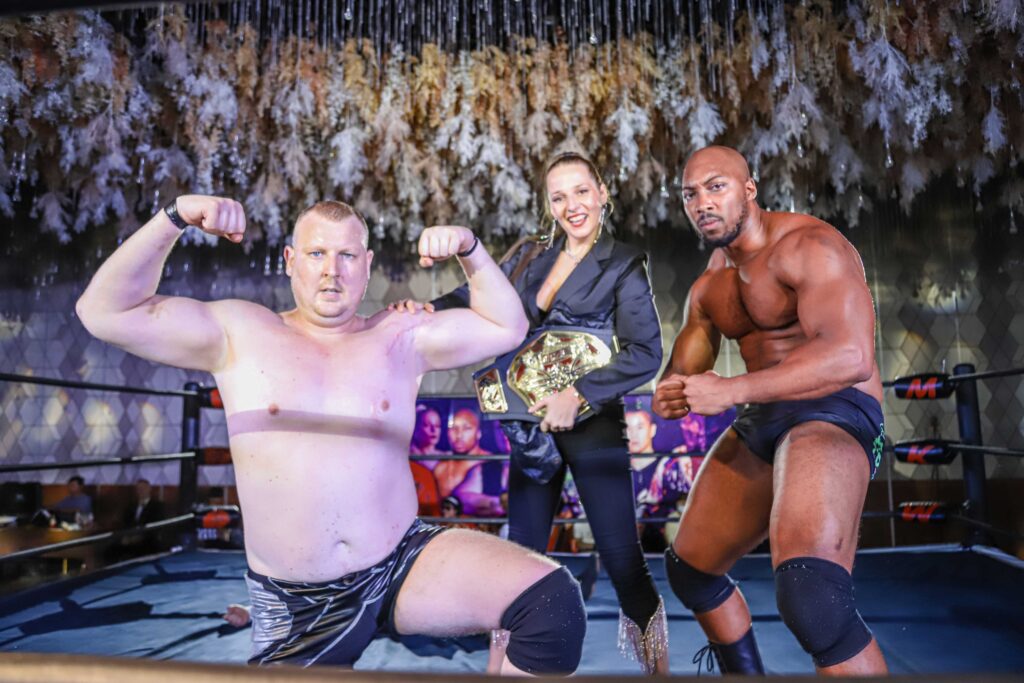 In the ring Jim Murray invites last week’s Coldray Games winner DC Chen out for an interview regarding his victory in the unprecedented, unorthodox match. Before he can get a word in about the MKW title opportunity the win granted him he is cut off by “The Supreme Society” Coldray and Little Johnny’s  Entrance. Coldray says that Wangtao winning the Coldray Games was a complete fluke and to not expect to be so lucky twice. Wangtao lunges toward Coldray and spooks Coldray, as Wangtao leaves smiling. It’s made official, in two weeks Wangtao will get his chance at Coldray’s gold.

The two start off tentatively feeling each other out but it ends abruptly with a boot in the gut. Now it’s a back and forth variety of offense. A Steinerline allows Ash to take control and he slows up the pace severely between big moves.

Ash gets distracted chatting with Marie allowing Aegon to come back by stringing a series of pin attempts and signature moves. As Ash slips away from a facebuster Marie enters the ring. Marie seductively invites Aegon to remove his shirt. When he does Ash attacks him and takes him out with his frog splash. 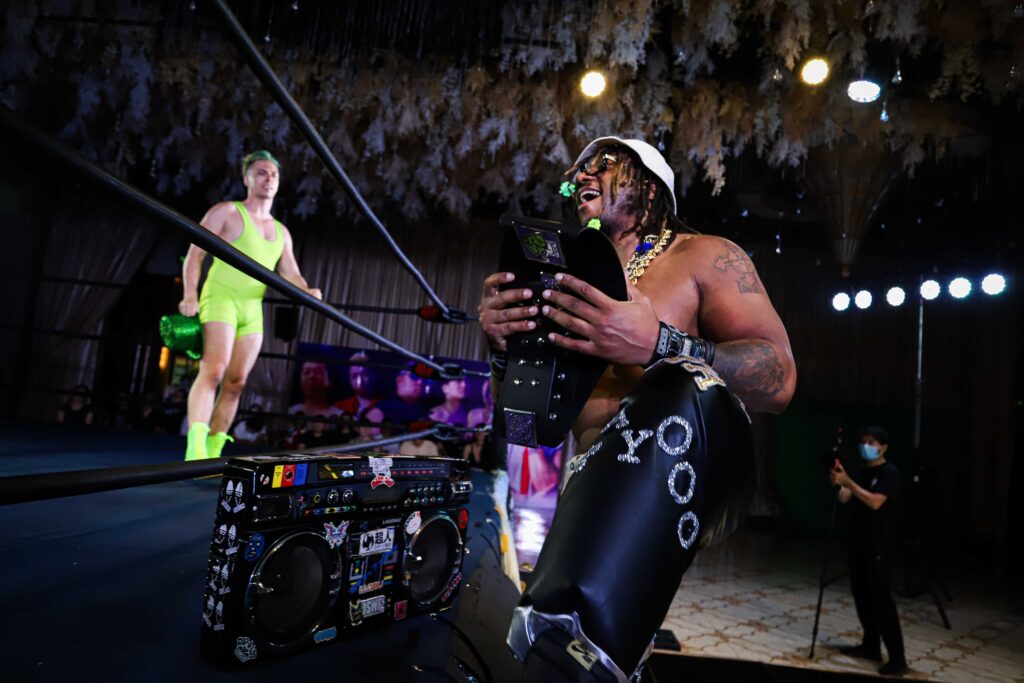 Buffa enters as Rupert Holmes looks on from inside the ring.

Buffa keeps control, isolating Holmes in the center of the ring with his signature Hip Hop styled moves. Before Chen can get a piece, Connor helps Holmes recover on the floor but C2NY follow them out. The Whips quickly turn things around however in their brawl element.

A unique assisted stomp on the apron allows the Whips to isolate Chen back in the ring.

The brawling fisticuffs continue to be unleashed by the two on Chen with quick tags. They expertly distract the ref and hit some more big double teams inching closer to victory.

While on the Apron Chen unexpectedly wages a counterattack and weaves through the two Whips for the tag.

Buffa comes in on fire and blasts Connor numerous times for a nearfall. When he scales to the top the Whips cut him off and desperately hit a flurry of cheap double team attacks desperate for victory. But a suplex counter into a small package spells the end.

The Whips get a post match backstage promo where the dysfunctional duo remain on the same page and steadfast in their goal of winning MKW tag team gold. But before they can sign off Uncle Money and Big Sam disrupt them, making a match for next week.

Solid exciting matches this week and interesting plot developments as it seems MKW finally really is finding itself.

Each tag team match had a distinctive feel and the build for the coming weeks is intriguing with new matches and rivalries to look forward to.