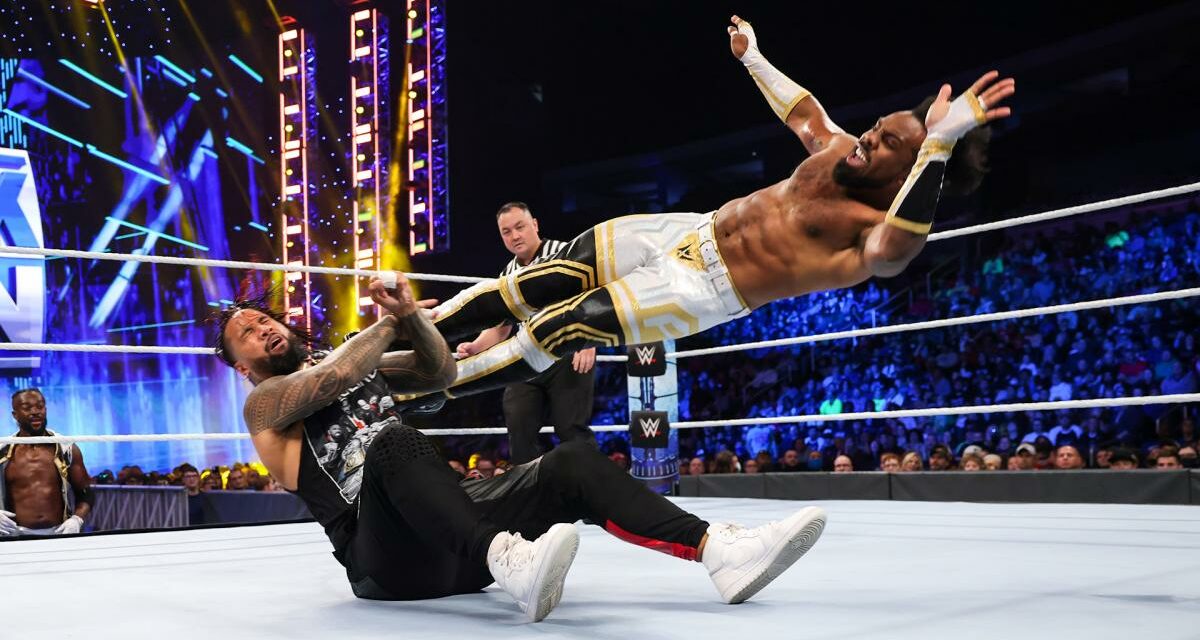 The latest chapter of The Usos versus The New Day rivalry is upon us, but now it also involves King Xavier’s royal reputation and, by association, Roman Reigns. Together, they all deliver a great main event tonight.

Something I can’t help but wonder as the opening montage of WWF/WWE wrestlers accompanies the beginning of the broadcast: what would it look like if it was filled with all of the recent WWE releases? It would be a pretty solid roster.

Reigns is first out in the ring, taking credit for making Brock Lesnar’s suspension and fine happen. He and Heyman recap the Usos and the New Day match from last week, with Reigns pretty ticked that Kofi Kingston and Xavier Woods pulled out the win. Jimmy and Jey try to pull a little twin magic by each pointing at each other when Reigns asked who it was that was ultimately pinned, but Reigns knows it was Jimmy (you can tell by the hair).

Out come King Xavier and Sir Kofi, with the king challenging “James” Uso to a match later tonight. If Woods wins, Jimmy will have to kneel before the King. If Jimmy wins, Woods will acknowledge the Bloodline.

Much is made by Michael Cole and Pat McAfee about Naomi’s business with Sonya Deville, relegating Baszler to something of an afterthought in this match, even as she tosses Naomi over her head with a release German suplex early on. Naomi hits more of a high-flying offence, with a top-rope cross-body and Lou Thesz press. 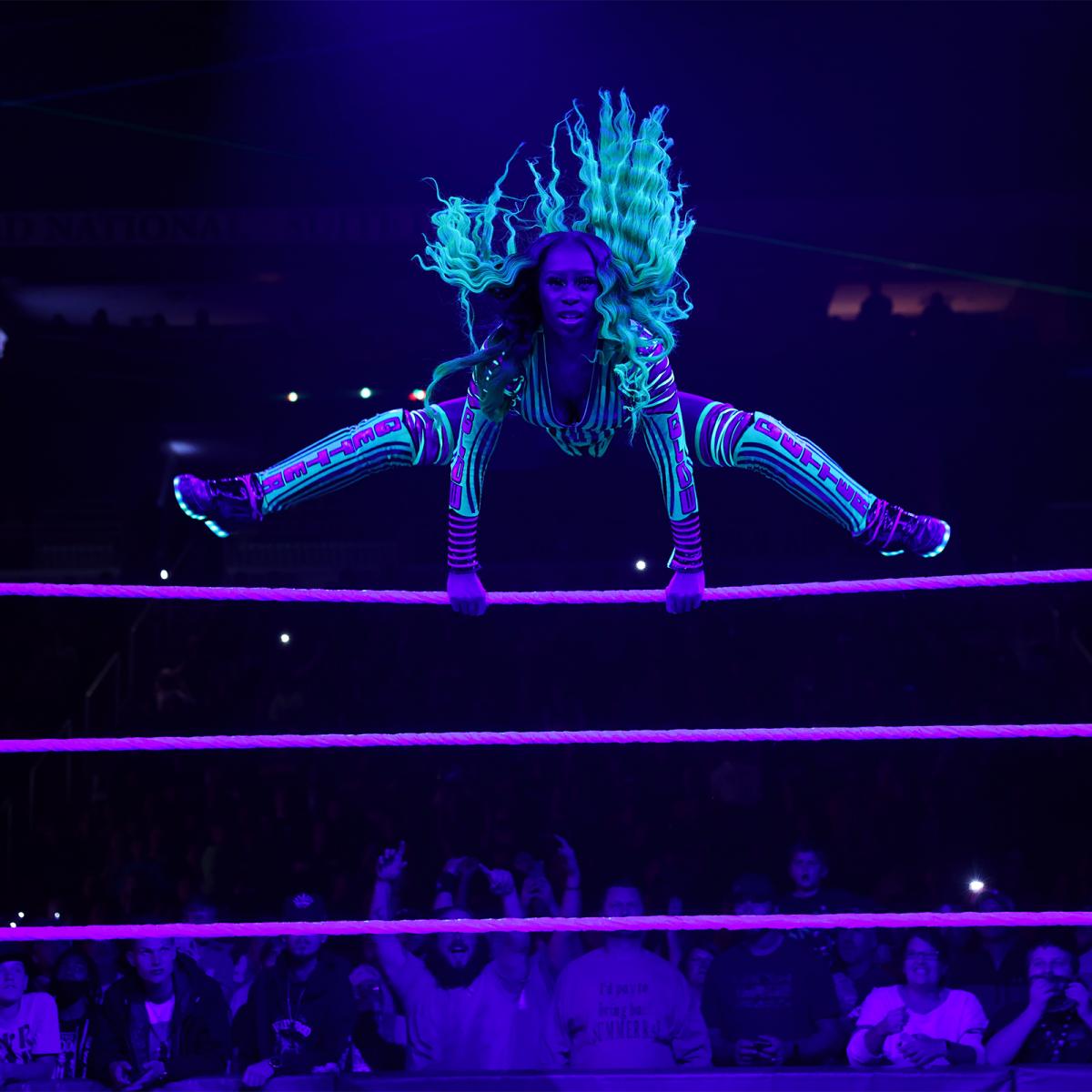 Coming back from break, Naomi rolls into the ring with a sunset flip but Baszler slips out of the pinning combination and into the Kirifuda Clutch. As Naomi makes it to the ropes, Baszler is forced to back up into the middle of the ring where Naomi rolls her up for the quick win.

After the bell, Deville comes to the ring and claims that Naomi’s victory doesn’t count. They don’t even try to make it logical, as Deville claims that Naomi had held onto the rope before the pin, and therefore it shouldn’t have counted. That’s not what happened.

Anyway, Deville restarts the match, Baszler locks in another Kirifuda Clutch, and gets the submission victory.

Backstage, Reigns is still upset about what happened on SmackDown in his absence last week. He says the show was almost as bad as Raw, which I guess counts as a shot fired ahead of Survivor Series.

Elsewhere, Ridge Holland speaks to Kayla Braxton about his admiration for Sheamus, and how he’s looking forward to using what he has learned from watching him over the years.

In another backstage area, Megan Morant talks to Shotzi Blackheart, who claims she’s had enough of smiling and pretending that everything’s okay. Now, she’s going after Sasha Banks.

Garza and Carrillo double-team Mansoor to open things up, and hold that advantage for a while by delivering basic offence like dropkicks and back body drops. Mansoor uses an enziguri to escape Garza and get a tag to Cesaro, who uppercuts his way through Los Lotharios both in and outside of the ring.

Garza and Carrillo turn it around, though, finishing the match with their combo finisher of Carrillo stretching Cesaro in the ring while Garza enters with a dropkick.

Backstage again, Jeff Hardy and Sami Zyan both have advice for Aliyah on how to establish herself on SmackDown. Zayn’s advice is simple: pantsuit.

In the ring, Drew McIntyre offers up an open challenge. Out comes…. 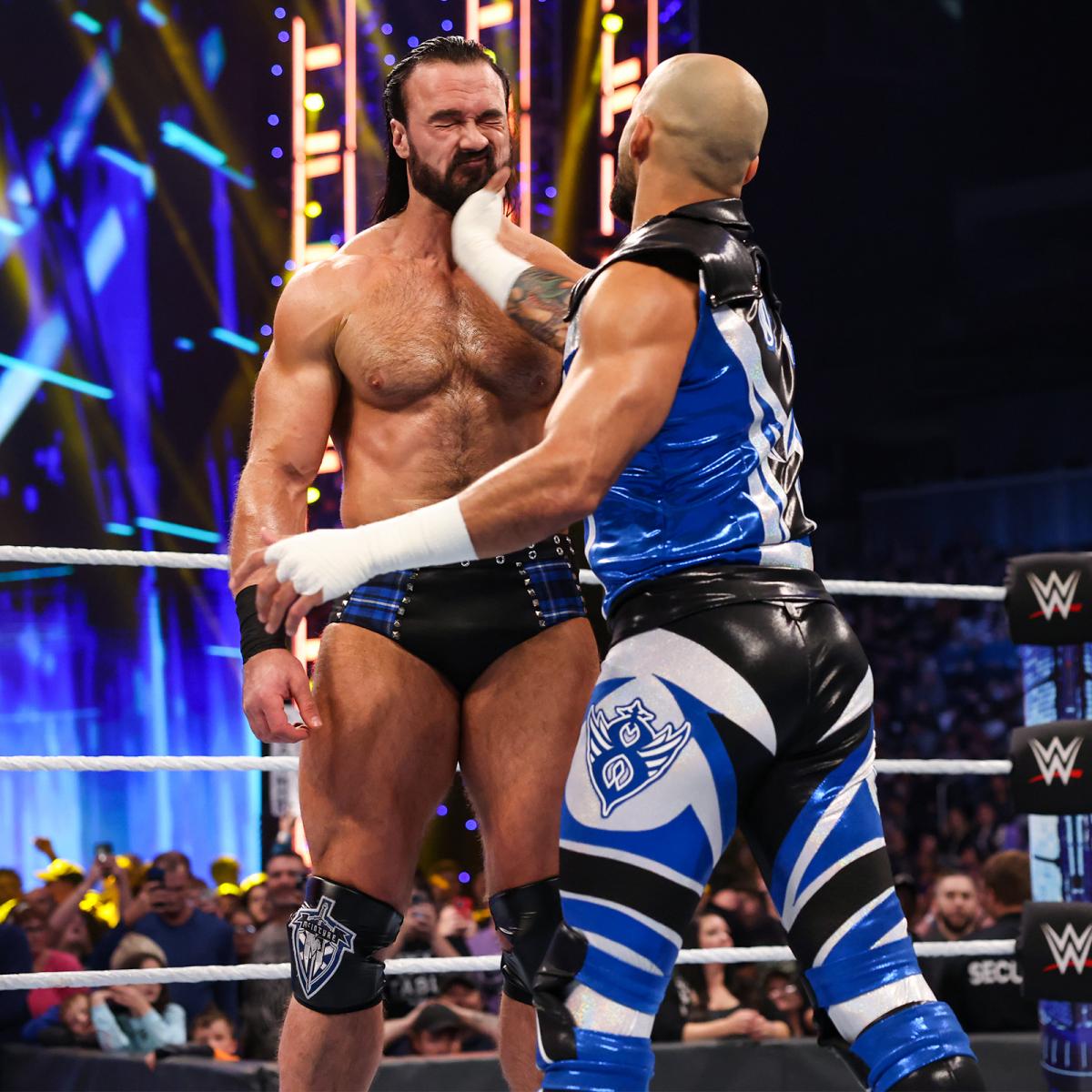 Ricochet tries his always impressive aerial attacks, but they’re routinely caught by McIntyre as the Scot tosses him around at will. Even a standing shooting star press by Ricochet is followed immediately by a brainbuster from McIntyre, and soon afterwards Drew knocks Ricochet out of the air with a Claymore mid-moonsault.

Braxton is with Kingston and Woods, and they reveal nothing new about the upcoming match between Woods and Jimmy Uos later on. Seriously, it was a waste of a couple of minutes.

In the ring, it’s time for an episode of Happy Talk, as Happy Corbin and Madcap Moss welcome Erik and Ivar of the Viking Raiders. Moss and Corbin tell some jokes before the Vikings trash the set. I’m having bad flashbacks of the Raiders getting involved in an angle with The Street Profits, Akira Tozawa, and ninjas.

The Raiders almost get a quick win after Erik bodyslams Ivar onto Moss, but Corbin interrupts the subsequent pinning attempt, allowing Moss to land a spinebuster on Erik. Corbin follows by tagging in, sliding in and out of the ring around the ringpost as he likes to do before downing Erik with a clothesline. Corbin follows with a Deep Six but only gets a two-count.

Moments later, after Erik slams Moss to the mat in position for Ivar to splash him from the second rope, Corbin pulls his partner from the ring and they walk away for the count-out loss.

Winners via count-out: The Vikings Raiders

Backstage, Sami Zayn now has some advice for Hit Row on how to make a splash, and Top Dolla asks him to show them how to make a proper entrance. As they all head to the ring, Pat McAfee says “oh, this is going to be fabulous.” Presumably, that’s for you, B-Fab.

Back from break, Sami Zayn makes his dynamic entrance, dancing and headbanging and looking a bit like Weird Al Yankovic when he’s rocking out. Hit Row follows behind him, not taking his advice seriously and also not letting him walk back to the entranceway easily.

In Reigns’ dressing room, the champ is still looking grumpy as Jimmy heads out for his match.

A predictably smooth match between these two, with Woods stopping Jimmy in mid-air off the second rope with a dropkick and a Russian leg sweep, while Jimmy counters with a rougher offence like dragging the King’s face across the top rope. Just before the break, Uso throws Woods to the mat and sends him sliding under the bottom rope, but Woods’ head seems to catch off the rope as he goes the floor.

Back from commercials, Jimmy has Woods worn out and trapped in a headlock, but the King escapes and delivers a thrust kick to Uso’s gut. Jimmy slides to the floor for a break, but Woods follows with a kick through the ropes. A gigantic leg drop off the top rope by Woods nets only a two-count, so Xavier goes up again. Jey distracts him, though, allowing Jimmy to climb up and bring Woods down with an avalanche Samoan Drop. 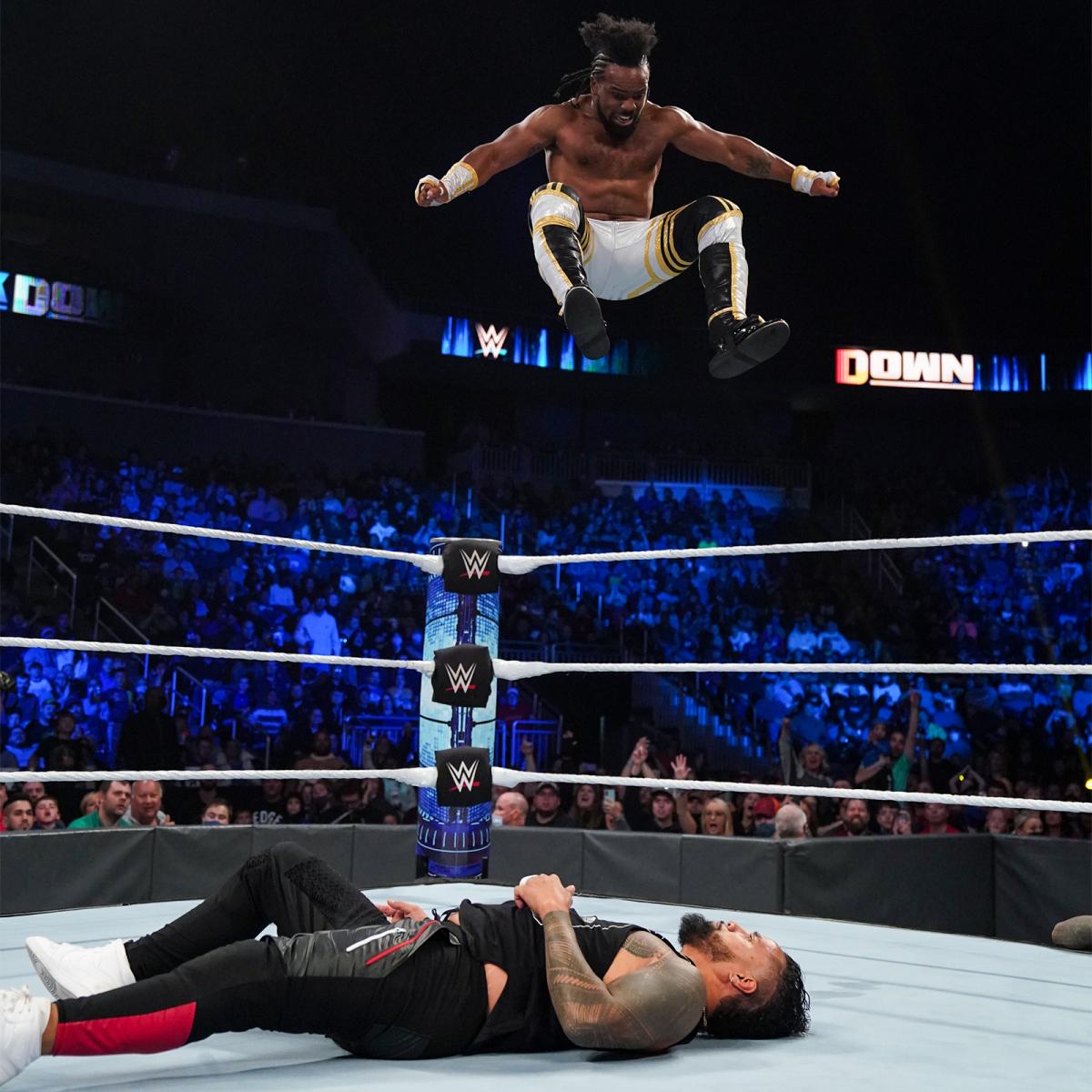 The still doesn’t even do justice to this leg drop. Photo: WWE

A hectic ending sees Jimmy stick a thumb in Woods’ eye, Kingston distracting the ref as Jimmy follows with a cover, Jey trying to help his brother make a pinfall from the outside, before Woods finally gets the pin with a handful of tights.

As Jimmy prepares to kneel before the King of Friday night, Reigns enters the ring from behind Woods and drops him with a Superman Punch. A spear on Kingston is followed by an Uso splash on Kofi’s troubled right leg, and this allows the Bloodline to stand tall in the end.

The show overall wasn’t anything special, but the main event match was terrific.