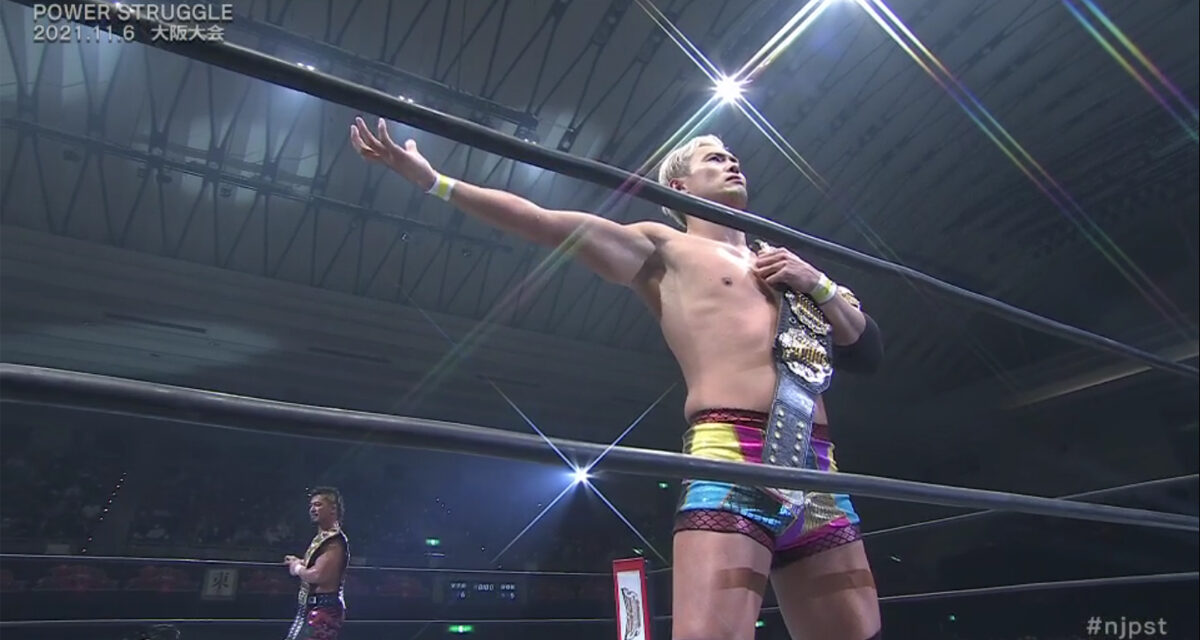 Five titles were on the line at NJPW’s Power Struggle and three of them changed hands. The all-important one, the IWGP World Heavyweight Championship, didn’t though as Shingo Takagi defeated challenger Zack Sabre Jr. in the main event of the evening. Shingo pinned ZSJ with Made in Japan to retain.

Kazuchika Okada, who retained his Wrestle Kingdom contract against Tama Tonga, confronted Shingo Takagi  after the main event. Okada was carrying NJPW’s old world championship and posed with it. It appears the two will be meeting for the IWGP World Heavyweight Championship at Wrestle Kingdom in January.

Toru Yano also held onto the Provisional KOPW 2021 Championship by beating The Great-O-Khan. The special stipulation is that the match was held under amateur wrestling rules with points for every takedown.

Robbie Eagles didn’t have any such luck as he put the IWGP Jr. Heavyweight Championship on the line against former champion, El Desperado.

Such an intense match was a tribute to both talented NJPW superstars. Each countered each other’s moves. They clapped and saluted each other. Desperado showed off his strength advantage, powering out of holds and knocking Eagles to the mat with shoulder tackles. Desperado attempted to throw Eagles into the steel ring post. Eagles ran up the post and flipped away. Desperado took the starch out of Eagles by splashing him on the floor though.

Desperado focused his attacks on Eagle’s left leg and knee to the point that he had Eagles hobbling and experiencing flashes of pain when he tries anything involving that knee and leg. Eagles does the same to Desperado. A running knee in a corner stuns Desperado. Eagles does escape Numero Dos but the damage is done. He cries out holding his knee after slamming Desperado to the mat with a suplex. 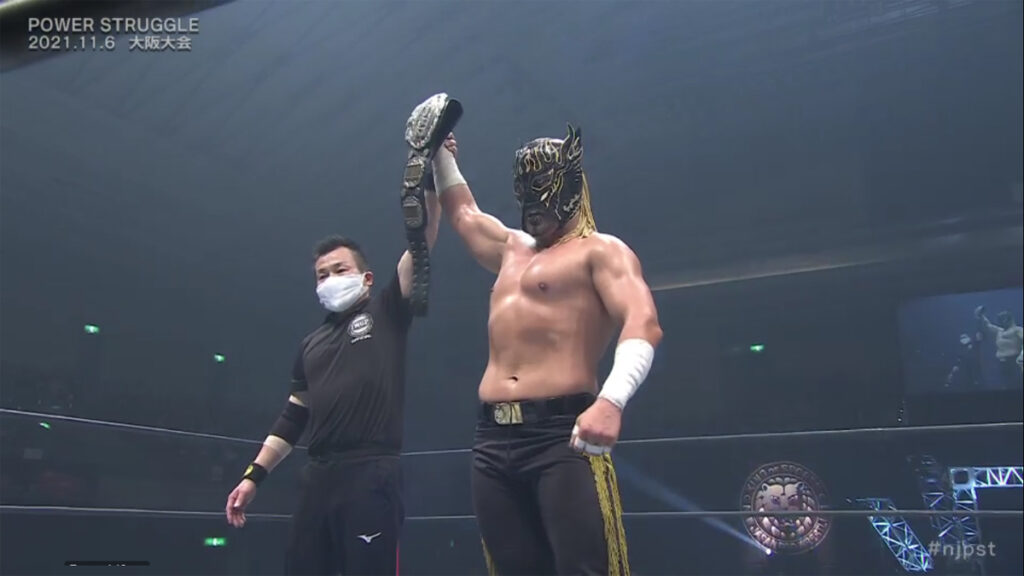 Desperado blocks Eagles’ 450 splash with his knees which ends up hurting Desperado’s already injured leg even more. Eagles though is the first to tap out when Desperado locks him in a modified version of Numero Dos winning the IWGP Jr. Heavyweight Championship for the second time. The crowd was shocked by the outcome.

Hiroshi Tanahashi’s reign as IWGP United States Champion came to an end at Power Struggle as well. He lost the title to challenger Kenta from Bullet Club.

Kenta kept ducking out of the ring right from the start. He kept goofing around so much, The Ace dove over the top rope splashing him on the floor. The Ace sat on the ring apron strumming his electrical air guitar.

Kenta just decides to take the championship belt and walk away with it. Tanahashi pursues him down the rampway. He runs at Kenta who scoops him up powerslamming him on the floor. Kenta high-tails it back to the ring with the belt demanding the official count The Ace out. Clutching his lower back Tanahashi barely beats the count.

Kenta rips off one of the turnbuckles then whips The Ace into it to injure his back even more. Tanahashi gets his revenge though by giving Kenta a High Fly Flow through a table, a table that Kenta set up himself. When Kenta rolls over on the floor we can see that a piece of the table is stuck in his shoulder, back. 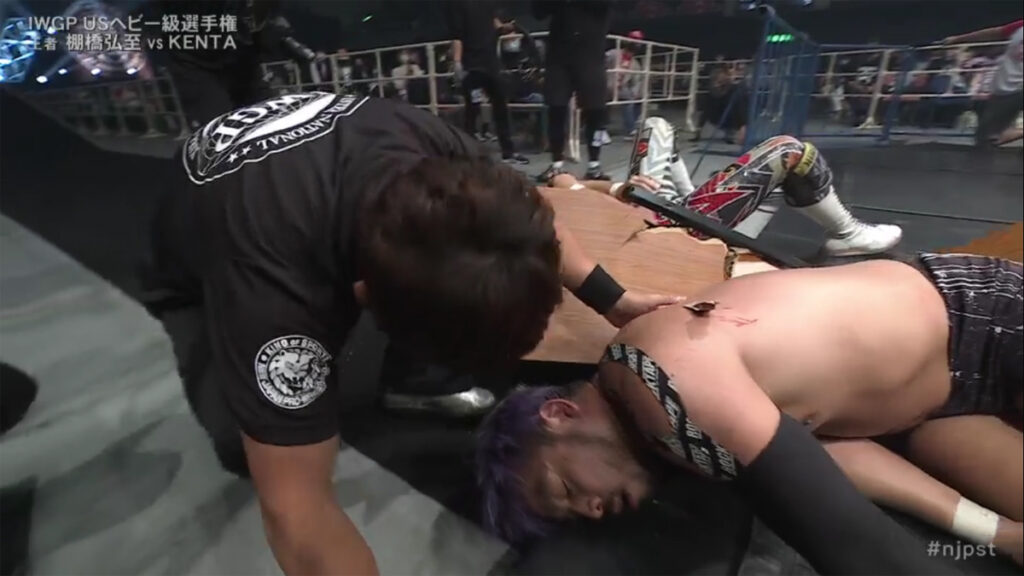 The aftermath of the table spot. Courtesy: NJPW.

Tanahashi escapes a Go To Sleep by twisting it into a Slingblade. Seconds later though, he is whipped into that exposed turnbuckle throat-first and is pinned by a Go To Sleep. Kenta is your new IWGP United States Champion. 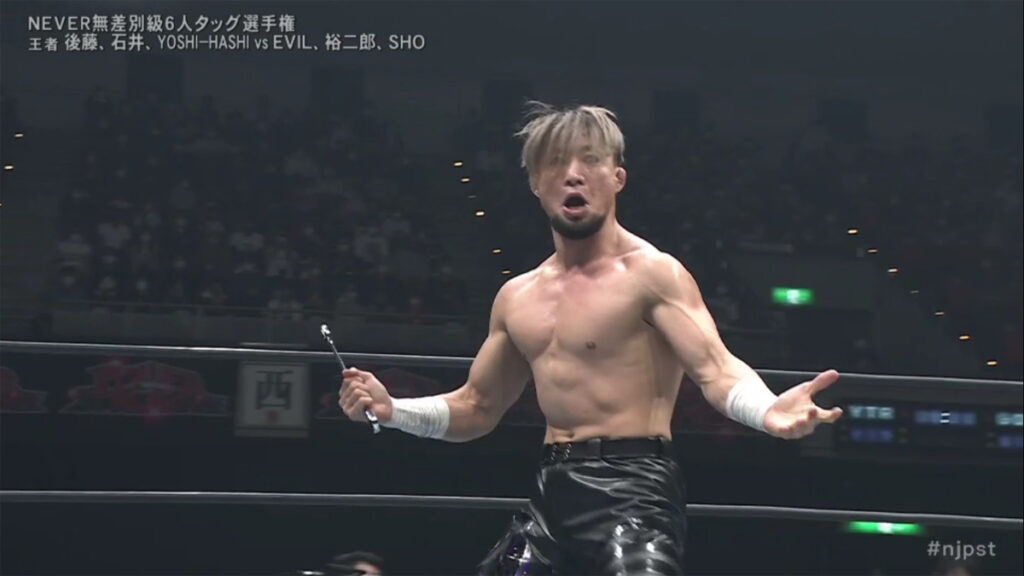 Evil ties up the official so that Dick Togo can choke out Hashi with his garotte. Hashi fights his way out clocking Togo in the face. Goto and Hashi take out Yujiro before he can use his cane on them. Sho brings in a steel chair. He hits Goto in the gut before a shoulder tackle from Ishii knocks him clear out of the ring. Ishii holds Evil for Hashi. Hashi accidentally clotheslines Ishii instead of Evil.

Goto, Hashi and Ishii triple team Evil. They have the match won except Togo pulls the official out of the ring. In the ensuing chaos, Togo chokes Ishii with his garotte, Sho nails Hashi in the head with a wrench and Evil pins Hashi with Everything is Evil to win the NEVER Openweight 6-Man Tag Team Championships for his team.

After the match, Evil holds Goto so that Yujiro can whack him in the head with his cane. Bullet Club makes Goto look on as they cut his Chaos flag with a pair of scissors. Yoh, dressed in white, makes the save before Sho can hit Goto with that wrench. The crowd claps as he super kicks Evil in the face and pummels Sho with haymakers. Yoh helps his battered Chaos pals to the back. 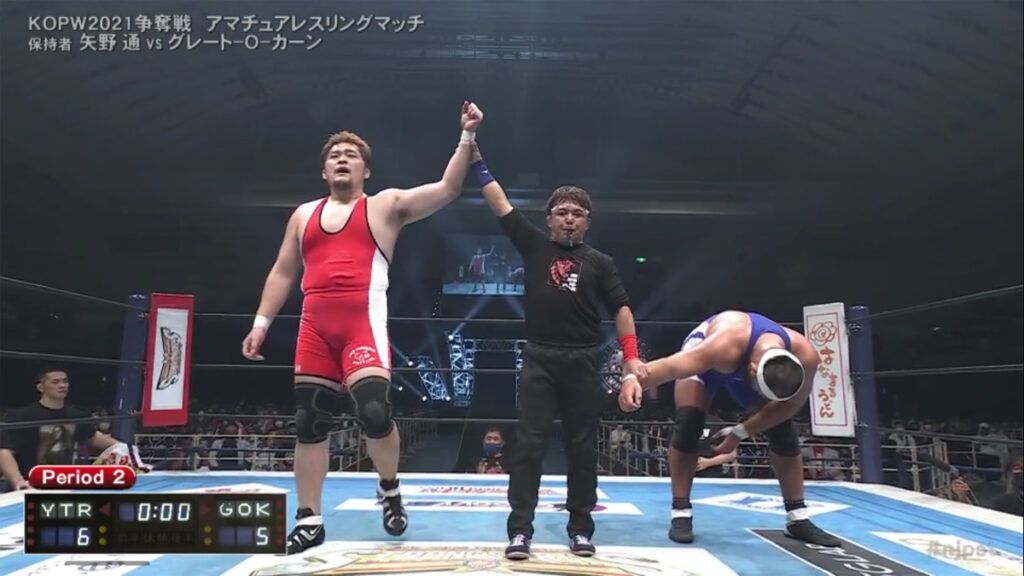 Toru Yano has his hand raised in victory over the Great-O-Khan. Courtesy: NJPW.

The KOPW stipulation is this match is going to be an amateur wrestling match with points for takedowns, etc. Yuji Nagata holds a primer before the match takes place with some help from two Young Lions explaining the format to the crowd. Khan comes out dressed in amateur wrestling gear not his usual ring and entrance attire as does Yano. Lots of mat wrestling, etc. Yano wins by one point, 6 to 5. Khan along with his United Empire partner Henare attack Yano after the decision is rendered by the judges.

Tonga fights to the very end but a Landslide and a Rainmaker put him away so that Okada holds onto that Wrestle Kingdom main event contract.