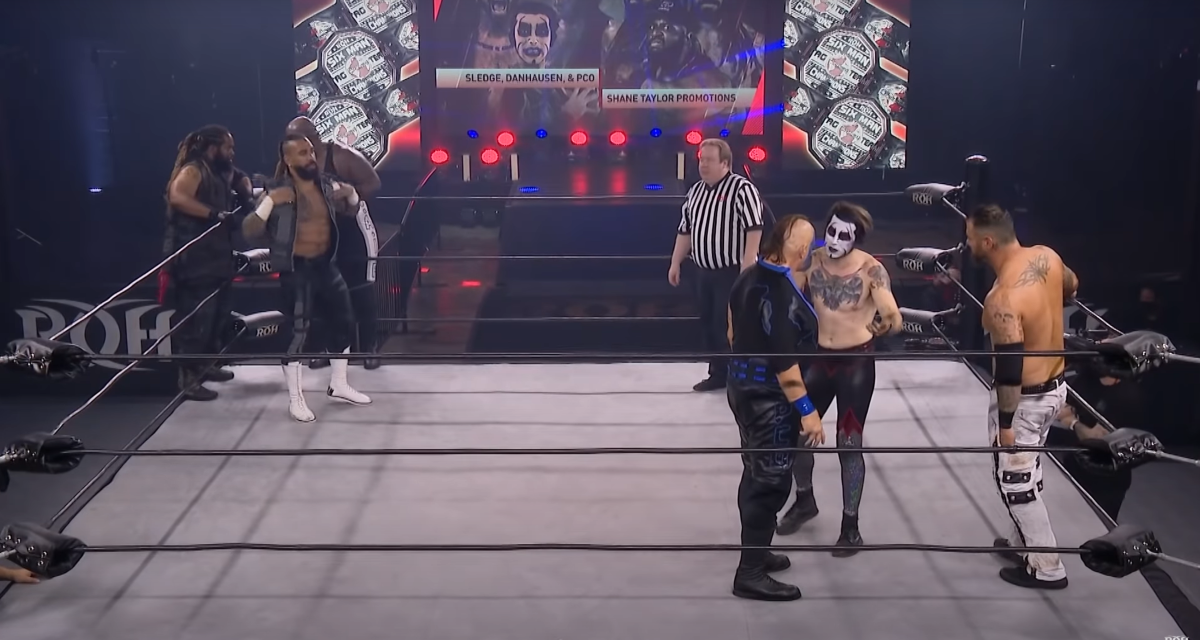 Greetings and salutations everyone and welcome to my weekly ROH TV report. We are a week closer to Final Battle and only so many TV shows before the PPV. This week was a special Halloween edition of ROH TV that aired exclusively on the ROH YouTube page due to some ongoing issues with the Sinclair stations. While I don’t expect much in regards to story progression, I do think this episode was a fun episode highlighting their unique spooky characters.

The show started off with our usual intro. We cut to the news center and Quinn McKay welcomes us to the show and runs down the card. She also picked the names for the Wildcard Trick or Treat Tag Team Match but those won’t be revealed until match time.  Our commentators for the show are Ian Riccaboni and Caprice Coleman. Of note, Riccaboni is dressed as a Teletubby.

During Rok-C and Quinn McKay’s intro we got a pre-match promo from the women. McKay told the champion they need to do everything humanly possible to avoid being stuck in the ring alone with Max. Rok-C and Alize started the match off but there were quick tags at the onset of the match. McKay came into the match and traded holds with Alize. Alize was able to neutralize McKay and get control of the match.

After sometime, Rok-C was tagged back into the match to give McKay a breather. After some offense from Rok-C, McKay tagged back in but this time she was confronted by Max. Max overpowers both Rok-C and McKay. In a puzzling moment of the match, Alize tagged herself back into the match and delivered a Go To Sleep to McKay but Rok-C was able to break the pin. Max dropped McKay with a backbreaker, but Alize tags in and steals the pin for the win.

After the match, Alize stared down Rok-C with her laser eyes as she clearly wants to be the next ROH Women’s champion.

The matches announced are:

The winning team will get a $10,000 prize and its time for the action to start!

CB and Young started the match and went back and forth with punches. They even traded pins early on the match as they both want that 10K prize. Since the teams were drawn at random, it would be expected for there to be disagreements among team. Lo and behold Young and Horus began to argue and Flamita took control. Horus with a head-scissors to Flamita who ended up on the outside of the ring.

Gordon is now in the ring and he and Flamita traded a super fast paced offense. EC3 was tagged into the match. Gordon and EC3 are now the legal men in the match. EC3 couldn’t keep up to Gordan as Gordan lived up to his nickname, “Flip”. EC3 eventually connected with a punch. Taven was now the legal man in the ring and dropkicked EC3 to the outside of the ring. Edwards drives Taven to the corner and double-teams him with Flamita.

Horus and Flamita delivered a double-dropkick to Taven. Gordon entered the match again and rallied for his team. Taven and Gordon teamed up against EC3 now. Taven with a close pin after a frog splash. EC3 and Taven now squared off in the ring. EC3 took Taven down with a clothesline. Edwards was able to catch a diving CB, but Taven took everyone out with a dive. At this point, everyone was down after Horus, Flamita, and Gordon dove onto everyone on the outside. This interaction allowed for Young to steal the pin after Horus hits a 450 Splash on CB.

In the pre-match promos, Shane Taylor says he, Moses and Kaun are “pissed off” and they are going to give their opponents the beating that La Faccion should have gotten

Moses and Kaun absolutely dominated Danhausen to start the match. Taylor tagged in and now Danhausen tried to fight back. Danhausen slapped Taylor and regretted that decision right away. Taylor dropped Danhausen with a powerful forearm. Sledge was tagged into the match as he and Taylor squared off in the middle of the ring. Taylor dropped Sledge with a forearm. PCO tagged into the match and got the full advantage for his match as he cleared the ring. PCO began to malfunction as he hit the referee and exposed the turnbuckle. PCO grabbed all members of STP and smashed them onto the exposed steel. With PCO still malfunctioning STP was able to come back together and take advantage of PCO.

Sledge with a suplex on Kaun. Taylor connected a nasty knee to the head of Sledge as Danhausen was tagged into the match. Danhausen dropped Taylor with a boot right to the face. On the outside of the ring, PCO with a tope suicida onto his own partner Sledge. This left Danhausen all by himself in the ring. Taylor hit the Marcus Garvey Driver on Danhausen and got the three count for the win.

After the main event Sledge and PCO battle on the outside of the ring to end the show.

Next week, the champions edition of ROH TV.

This week’s TV was fun. While we did not get any progression on the main stories as we head into Final Battle but it was a needed distraction as this week in ROH was not a fun one. Until Next time!