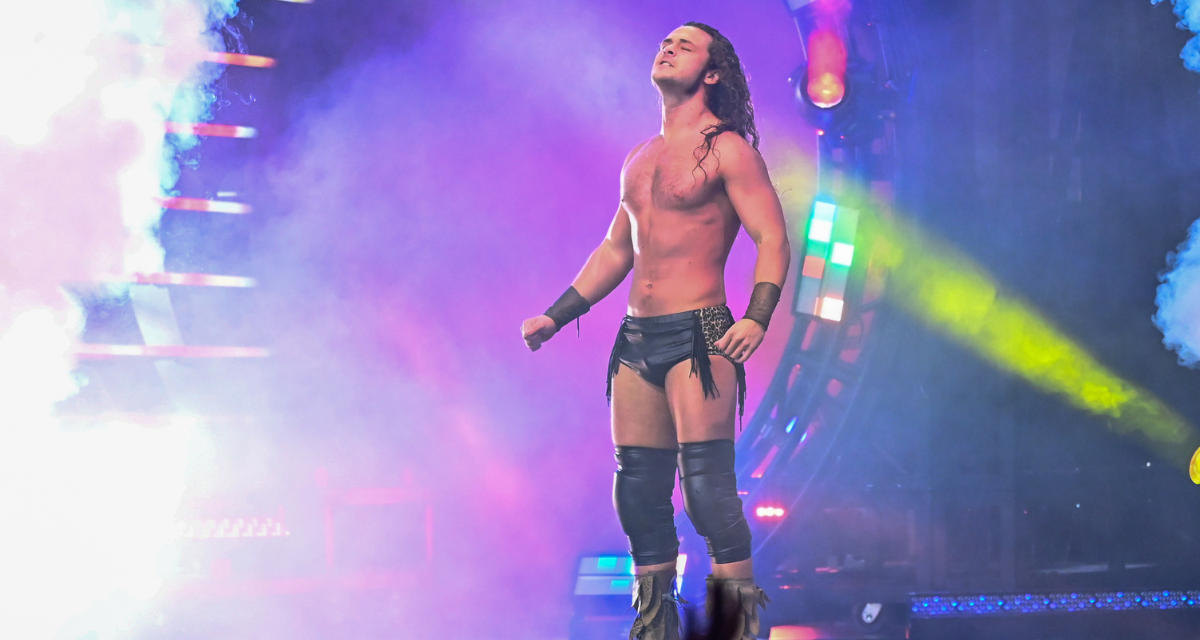 Do a quick Google search, and you’ll find dozens of songs that are jungle-related, whether the word is in the title, like “Welcome to the Jungle” by Guns ‘n’ Roses or Springsteen’s “Jungleland”, or thematically, as in “The Lion Sleeps Tonight.” But none of them are as ear-wormily catchy as the 1980s song “Tarzan Boy” which wrestling fans will know better as AEW star Jungle Boy’s entrance music.

The ’80s synth-driven dance-pop tune with its catchy sing-along chorus is a perfect pairing for the excitement and general good feelings that are inspired when Jungle Boy (Jack Perry) hits the ramp, and hearing the crowd singing its iconic Tarzan yell really paints a vivid aural picture whenever he’s on TV.

Which brings a lot of joy to Naimy Hackett, who co-wrote the song with Maurizio Bassi, as two of the principal members of the Italian band Baltimora.

“It’s a feel-good tune, a happy tune,” she told SlamWrestling.net via e-mail. “It’s a tune that invites the crowd to join in. (Seeing the AEW) crowd response is amazing – it’s a wonderful feeling to see people enjoying in and singing along.”

The song was originally released in 1985 as the lead single for Baltimora’s debut album, and found enjoyed tremendous international success, charting in several European countries, and spending half a year in the Billboard Hot 100 charts in the US. It has since been considered a quintessential ’80s “one-hit wonder” – though it actually hit twice, achieving new-found popularity and charting again in 1993 when it was used in ads for Listerine and also on the soundtrack to the third Teenage Mutant Ninja Turtles movie.

Writing the lyrics, Hackett said she could never have predicted its legacy.

“Maurizio wrote the music with the crazy Tarzan yodel, then handed it off to me for the lyrics. (I was inspired) by the old Johnny Weissmuller movies, and a tree house that my dad built for me, where I (pretended to be) Tarzan, Jane, and Cheetah. (I tried to capture) the total freedom I had growing up in the middle of nature.”

“(While) I thought Maurizio’s music was brilliant, I never thought it would have such a crazy global success.”

Hackett actually wasn’t aware that the song was going to be used by AEW – she found out about it when she heard about it from her daughter whose friend had read a story about it.

“The publishers handle all of the various licensing arrangements,” she explained. “The only time they reach out to us for permission is when someone wants to make a new version of it or sample it for a tune, like when it was used for Destiny Child’s ‘Nasty Girl.’”

Since learning about Perry’s using the song (he actually used it pre-AEW, but Tony Khan purchased the rights to use it in AEW as a Christmas present for Perry last year), and after having seen videos of him coming out to the song, Hackett has become a big fan of Perry – who actually is younger than the tune by over a decade.

“I couldn’t be happier that he is using the song,” she said. “When I saw the video of him talking about the tune, my heart melted,” she said. “I’ve seen his shows on video, and I look forward to seeing one in person – he’s wonderful, and the song is the perfect match!”