AEW Dark: Too Fast Too Fuego debut, Solo gets too much against Danielson? 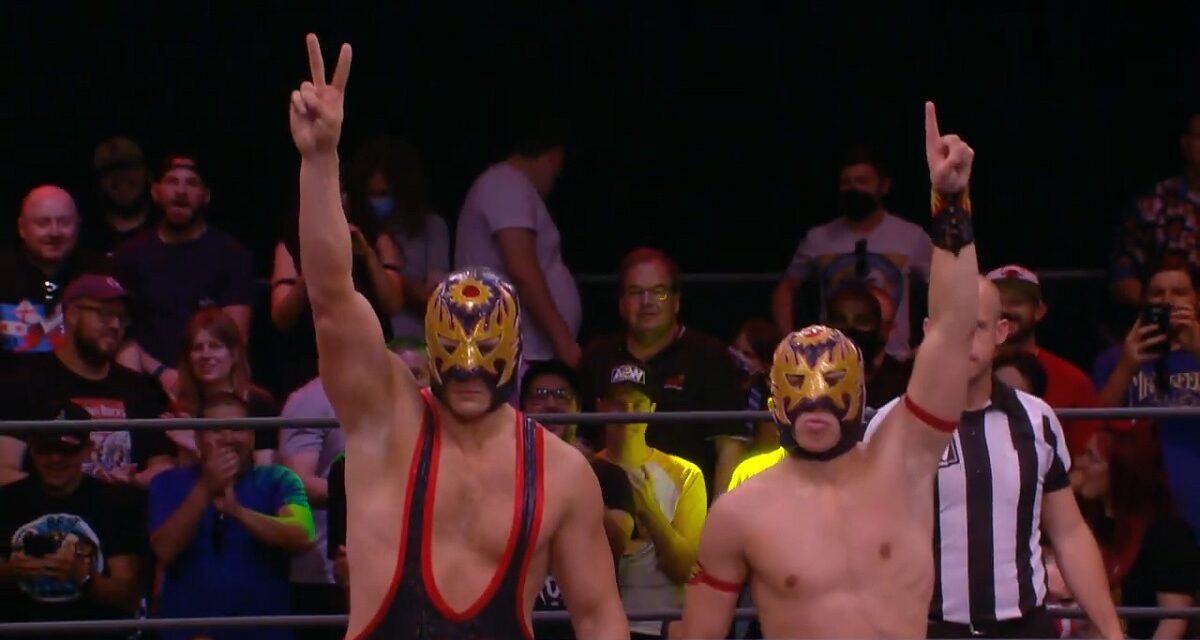 Welcome to our coverage of AEW’s weekly Dark show. This week’s episode was back to the longer format and was a bit promo heavy.

The show featured nine matches which were quite good and included some legit star power. Bobby Fish in the opener was fantastic, Dante Martin and JDX had a high impact bout, and 2Fast 2 Fuego debuted and had a great match.

Brian Danielson main evented (as he should have) but his competition in Aaron Solo just seemed beneath him. Danielson worked a good match and it was given plenty of time to tell a story but that was part of the problem with the bout. At no time was it believable that Solo (for all his credit) could or should give Danielson any trouble and this probably should have been booked as a squash.  It doesn’t seem reasonable that Danielson can go from a draw with Kenny Omega, to handily beating Nick Jackson, Minoru Suzuki, Dustin Rhodes, and Bobby Fish, but now is having problems with Aaron Solo?? Even though the match was very good, it never really seemed believable.

Overall,  it was a very good episode of Dark, if a bit on the long side (just over an hour). The standouts from this episode were Xtina Kay, JDX, and the team of Dean Alexander and Kid Bandit. The match of the night pick could go to multiple bouts  depending on your tastes: the Fish opener may have been a squash but it was excellent; and Too Fast Too Fuego was a brilliant fun bout.  But my gut has to go with Dante Martin vs. JDX, as the paring was just on fire throughout the match.

1. Bobby Fish vs. Invictus Khash. This was a great opening match Bobby Fish’s hard hitting style of strikes ran roughshod over the up and comer Khash. The match set a breakneck pace throughout and ended with an Exploder Suplex into the ropes and a Head Kick. Let me just say how much I love Bobby’s ring style – everything looks like it hurts, and he is a great foil for mega stars like Brian Danielson and CM Punk.

2. Riho vs. Xtina Kay. The second match of the night was also a good one. Riho and Kay were given enough time to tell a fun back and forth story of David and Goliath. Both competitors hit nice spots with Kay hitting power moves and Riho hitting some top rope cross bodies and a Double Knee strike for the win.

3. Sammy Guevara cut a promo on Ethan Page. Ethan Page came out and interrupted and cut a promo of his own on Sammy. Then, Scorpio Sky jumped Sammy from behind, and the Men of the Year beat him down until Proud N Powerful ran out for the save.

4. Eddie Kingston vs. Jack Evans. This match came off a bit odd to me. I like both of these talents but the match seemed to be a lopsided affair with Evans controlling the offence and hitting move after move for the whole match. Then, sort of out of nowhere, Kingston hit an Exploder and the Dragon Sleeper for the win. Now I’m not saying the match was bad; it wasn’t. Evans looked great, got every spot he could get in, and Eddie sold them all wonderfully. It’s just that the Kingston win seemed out of place after getting beat up for so long.

5. Dante Martin (w/ Lio Rush) vs. JDX. This was a surprisingly competitive match where JDX looked as good as Dante Martin. JDX would work the ground strikes and high risk moves to counter Martin’s offence. The match ended with Dante Martin hitting the Double Jump Moonsault for the win. JDX’s performance against such a talented youngster shouldn’t be looked over, and that’s why JDX is my Talent to Keep an Eye On award winner this week, and why this is a match of the night contender. The match ended with a promo by Rush that had all the charm as abusive relationship. This paring of Rush and Martin has to be building towards an explosive break up possibly when Dante’s brother comes back.

6. Adam Cole promo. Cole’s always great, and even got a Road Warrior pop from the small Universal Studios crowd.

8. Tiger Ruas vs. TJ Brown. This was Tiger’s debut match, and it was quick and impressive. Immediately after the bell rang, he hit a spinning heel kick for the KO. The match ended with a Tiger promo.

9. Diamanté vs. Skyler Moore. Skyler is getting better weekly. The paring have a fun match that Diamanté won by hitting the Standing Sliced Bread, and then locking on a nerve hold for the tap out.

10. Tony Nese cut a promo. Tony felt a bit stiff on the mic but it was his first interview in AEW, and I have the feeling that big things are planned for him, so he’ll get lots of time to improve.

11. Shayne Stetson vs. #10 (w/ -1 and Dark Order). #10 punched, kicked, and slammed Stetson into oblivion, and got the submission win with a Full Nelson. I wonder if Shawn Spears cares that #10 has adopted the 10 chant?

12. Too Fast Too Fuego vs. Dean Alexander and Kidd Bandit. There is speculation as to who could be under the Fuego 2 mask. Whoever Feugo 2 is, he and Fuego Del Sol worked well as a team together. Kidd Bandit and Dean Alexander put up a good fight in a very entertaining match, but it was Fuego 1 with the Tornado DDT for the win.

13. Brian Danielson vs. Aaron Solo (w/ The Factory, Nick Comoroto and QT Marshall). This was a back-and-forth match that saw Danielson’s superior wrestling skills countered by distractions and double teaming from the outside by Factory members. Solo got in a lot more offence than he should have against someone the calibre of Danielson. Eventually Danielson grounded Solo and applied a LeBell Lock for the submission win.