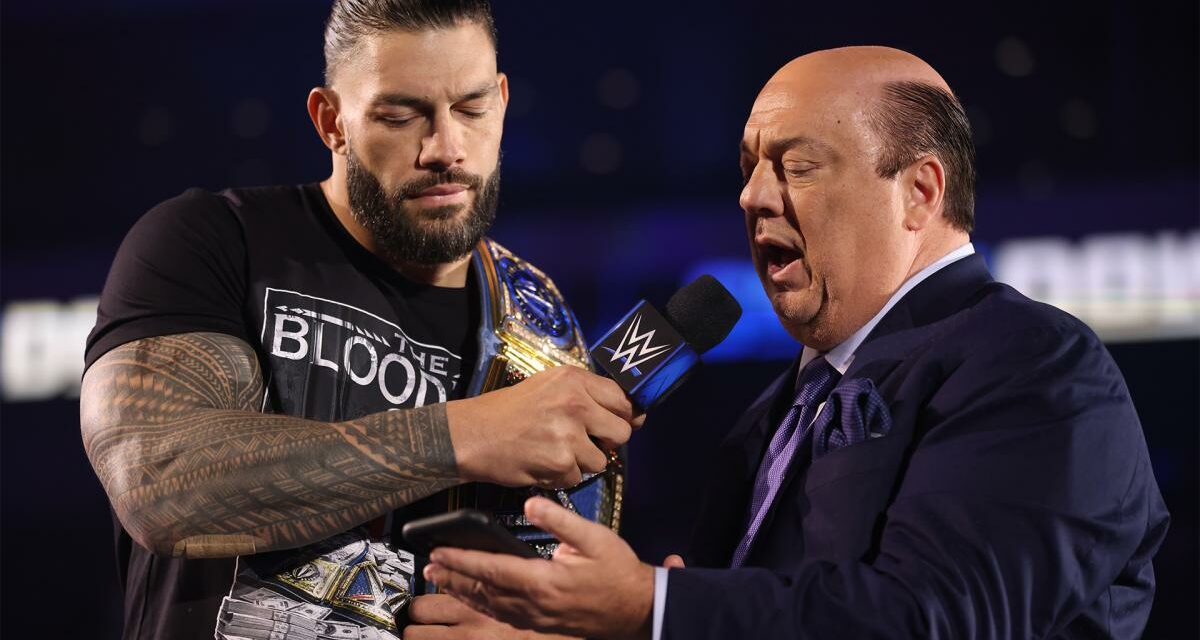 A testy title exchange, a coronation, and so … much … talking. Those are the highlights as Friday night welcomes faces both new and old and kicks off some new (and old) rivalries. To start, Roman Reigns and Paul Heyman stroll to the ring and discuss the fall-out from the Crown Jewel event the night before. Reigns gloats about all of the people he’s beaten (stll mentioning Daniel Bryan by name, but I suppose because that’s not the same as Bryan Danielson) before questioning, again, if Heyman is loyal. They have officially stretched this story point to the limit, as pretty soon it will just look foolish for Reigns to keep someone that he clearly doesn’t fully trust in his close company.

What Reigns, and the crowd, is really waiting for, though, is Brock Lesnar. For just under the first twenty minutes of the broadcast, Reigns talks and waits for Lesnar, right through the first commercial break. Finally Lesnar arrives and, without a word, clotheslines the champ first to the mat, and then to the floor. Reigns is clobbered by the steel steps and is hoisted up for an F5 onto the announcer’s table before The Usos save their cousin.

Lesnar dispatches Jimmy and Jey before Adam Pearce sends out the flunkie brigade to try and take Lesnar down, and it goes about as you’d expect. Pearce does talk him down, though, as The Bloodline retreats to the back.

After another commercial break, Adam Pearce is in the ring and admonishing Lesnar’s actions, and announcing a suspension of Brock Lesnar. Unhappy with that, Brock returns to the ring and grabs Pearce by the collar and asks Pearce to repeat himself. The SmackDown GM does so, and receives an F5 for his troubles as we break again for commercial.

Upon return, the show replays what we just saw between Pearce and Lesnar, and by the time we’re ready to get to another storyline it has been thirty-six minutes of SmackDown broadcast time. You could have had, like, nine Queen’s Crown qualifying matches in that time.

We catch up with Sonya Deville backstage dealing with the chaos when Naomi gets in her face and demands a fair match with her. Deville brushes her aside and turns to see Drew McIntyre towering over her. He tells her he’s going to the ring to issue an open challenge to find out who has the balls to fight him, walking right past a group of wrestlers on the way. He could have just asked them right there, but then we’d miss the chance for another entrance.

McIntyre asks the crowd “who’s ready for a match finally?” and gets a hearty cheer. Guess who answers the call from the back?

The show just passes the forty-minute mark when the bell rings to start the first match. Zayn rolls out of the ring immediately and is forced to chase him down, sending him into the barricade. Whew, all of this wrestling is exhausting; better take a commercial break.

Coming back, McIntyre is flat on his back as Zayn drops an elbow from the second rope. After a few solid punches, McIntyre hulks up and grabs Zayn, driving him into the corner before delivering some overhead throws. This sets Zayn up for the Claymore but again Sami rolls to the floor. Picking his spot, Zayn gets back in and tries to lift McIntyre for a Blue Thunder Bomb, but McIntyre delivers a Glasgow Kiss instead.

Zayn dodges a charge and McIntyre runs into the ringpost, so Zayn runs him into a second post and sets up for the Helluva Kick. He waits a little too long, mocking McIntyre’s countdown, and his kick is countered with a Claymore.

Next up is Kofi Kingston leading the coronation of King Xavier. Kingston adorns his partner with his cape, his sceptre, and finally his crown. After Xavier thanks the crowd for supporting the run to his dream, Kingston billows the king’s cape for dramatic effect. 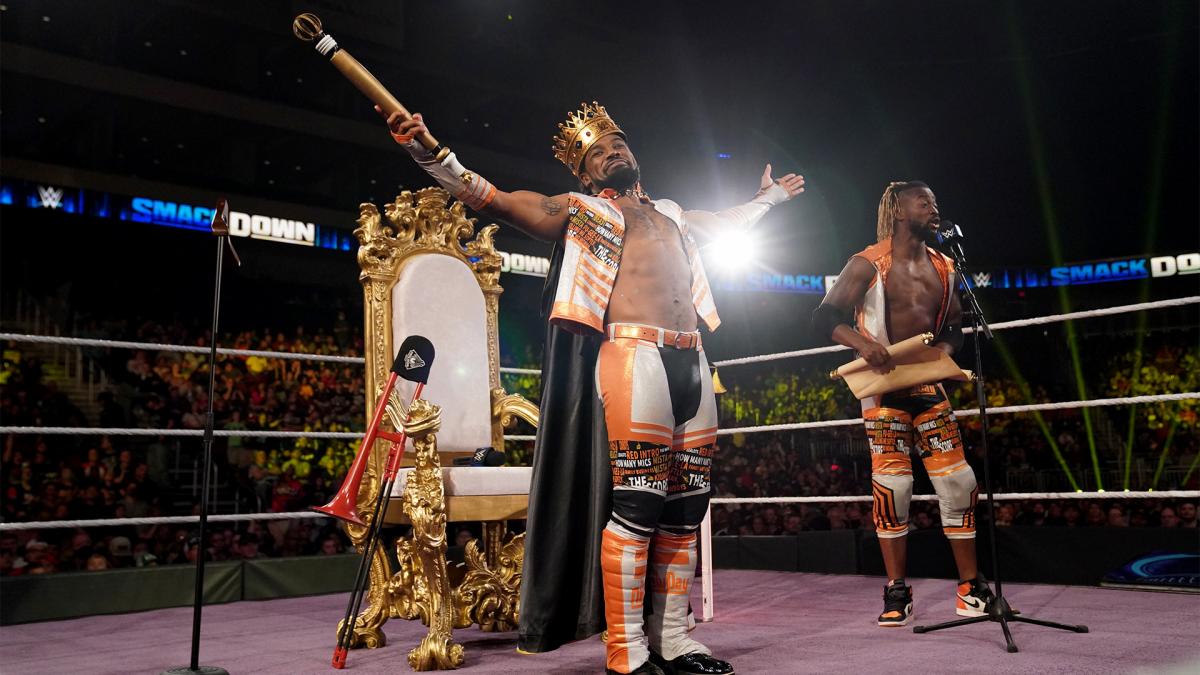 Elsewhere, Becky Lynch holds on tight to her SmackDown Women’s Championship, and thinks maybe it’s time to bring “Becky Two Belts” instead of just swapping her belt with Charlotte later tonight before they swap brands.

A fast pace to open the match as they exchange chops before an enraged Mansoor backdrops Ali and soon afterwards hits a cross-body off the top rope. Ali gets a near-fall after a sit-out powerbomb, but Mansoor turns Ali inside out with a clothesline. The back-and-forth continues as Ali dives off the second rope for a sunset flip, but Mansoor reverses it and stacks his former mentor up for the win.

Getting a more formal introduction, Hit Row makes their entrance, each of them getting a chance to say their name and try to win over the hip crowd in Wichita, Kansas.

Scott and Dolla make short work of Wichita’s finest, especially as Dolla hoists them both up and plants them with a front slam. He holds up Moyer and tags in Scott to deliver a kick to the head for the win. 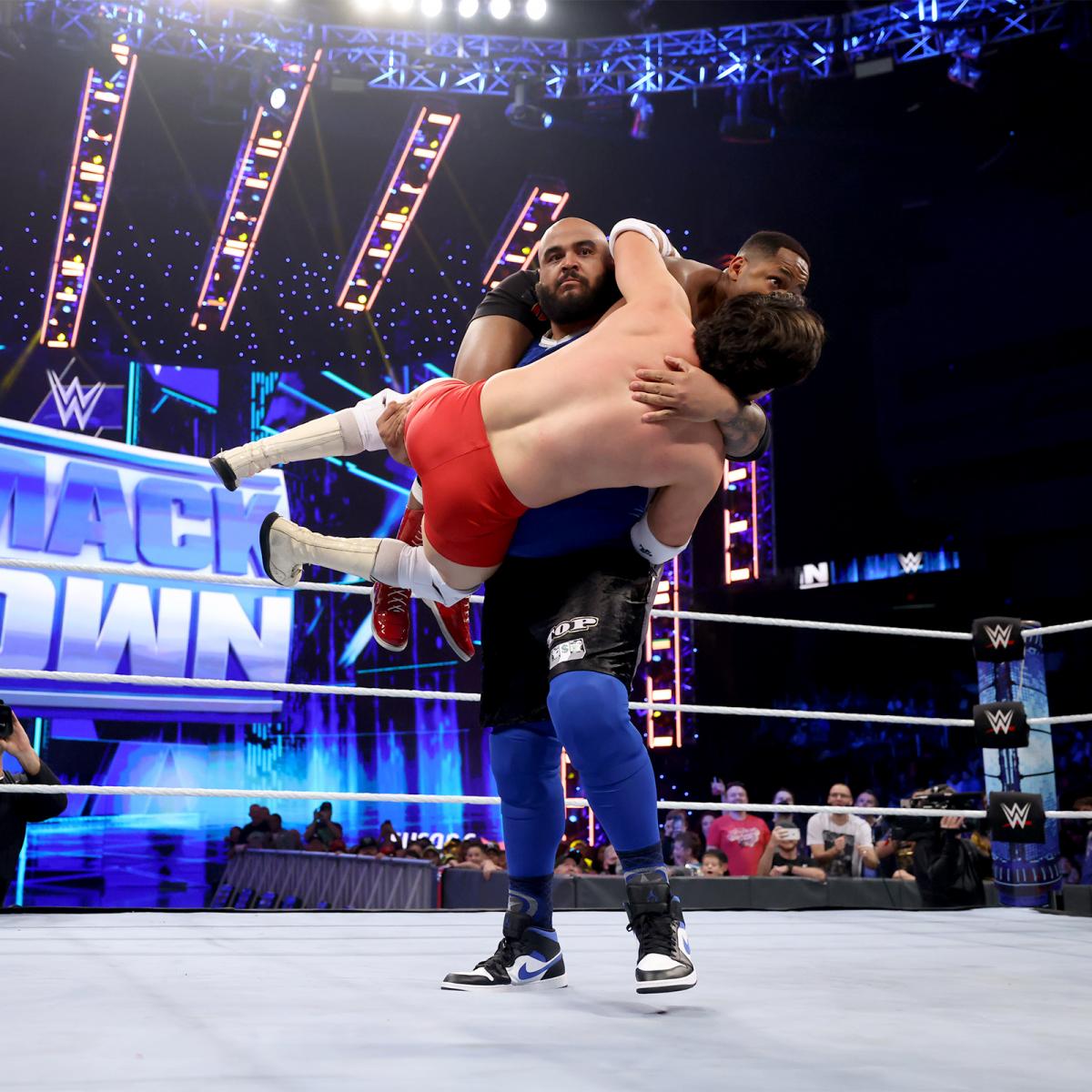 I’d like to give Moyer and Williams as much notoriety as possible. This is the best shot of them. Photo: WWE

Kayla Braxton catches Deville at the doctor’s area, and she kind of throws Pearce under the bus for how he handled the Lesnar situation.

The two former kings start off by exchanging punches (Corbin) and kicks (Nakamura). After Nakamura delivers Good Vibrations to Boog’s musical accompaniment, Corbin drops Shinsuke to the floor with a forward suplex. This leads to a break, and on return Corbin is happily in command until Nakamura escapes a body slam and hits a kick to the face. He follows by driving a knee into Corbin’s gut while he’s hung up on the corner.

Corbin retaliates with a sort of rolling body slam dump to the mat, but Boogs revives his buddy with another guitar solo. Moss grabs the end of the guitar to cut him off, bringing Nakamura out to kick Moss away. Corbin takes advantage by attacking Shinsuke from behind, bringing him in to the ring for an End of Days and the win. 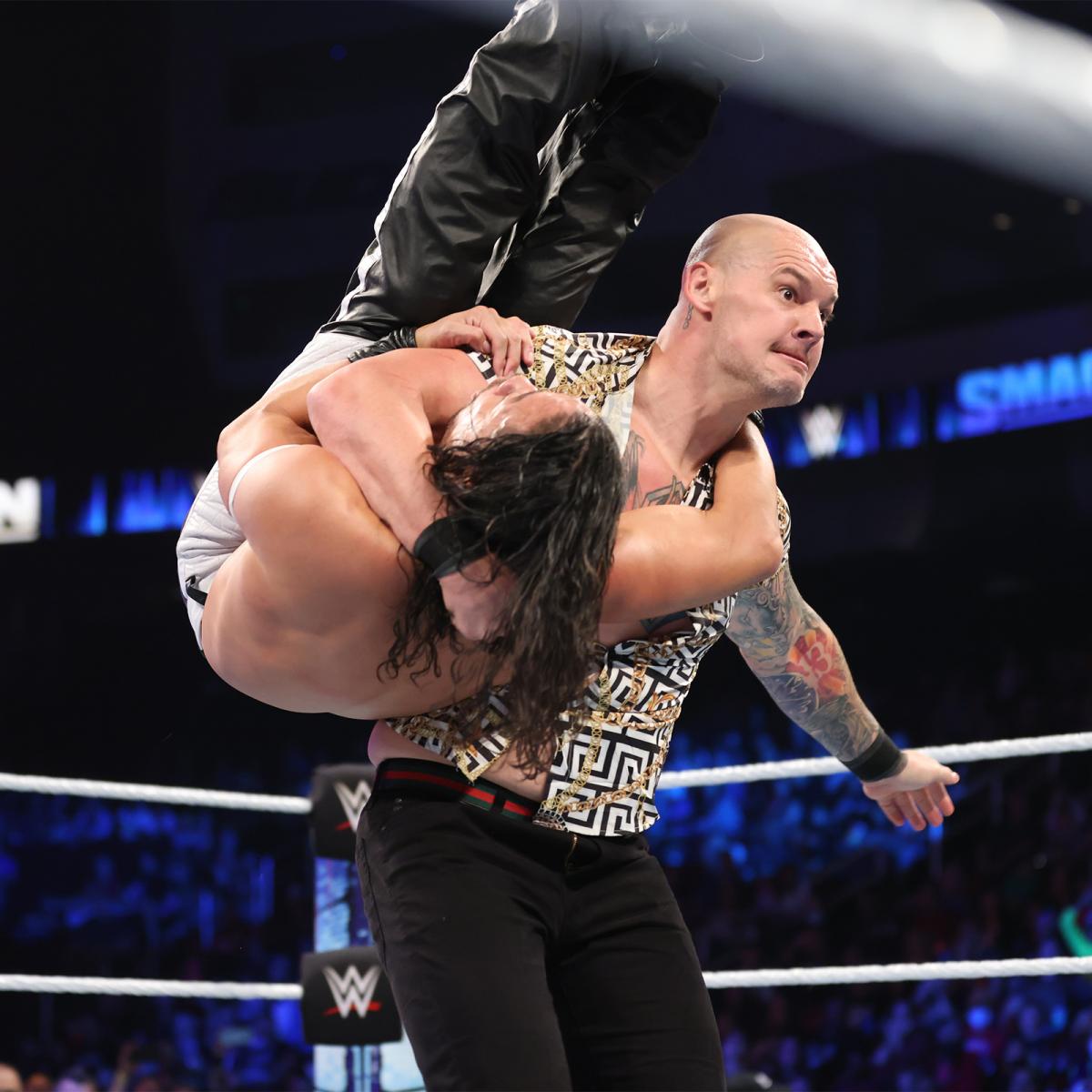 Out of context, this really looks like a still from Dancing with the Stars. Photo: WWE

Finally, Sonya Deville is in the ring with Becky Lynch and Charlotte Flair, warning the women to behave and exchange the titles with civility. Neither seems eager to do so.

Finally, Deville takes Flair’s belt and Lynch tosses hers over to Flair. Flair grabs a mic and suggests a “Winner Take All” match tonight which, with just a few minutes left in the broadcast, is a cute idea. Before Lynch can answer, Sasha Banks makes her entrance and inserts herself into the title picture (side note on a pet peeve: after Banks utters the word “bitch”, Flair tells her that this is a PG show, continuing the endless misunderstanding by WWE that PG doesn’t preclude swearing).

Lynch says that she’ll see one of them at Survivor Series (someone keep an eye in Nia Jax, please) before making her exit, leaving Banks and Flair to duke it out in finishing up the show.

This would have been a great episode of Saturday morning WWF Superstars. As it was, it was an okay episode of Friday Night SmackDown.