Pac, Andrade give their all in another Rampage classic 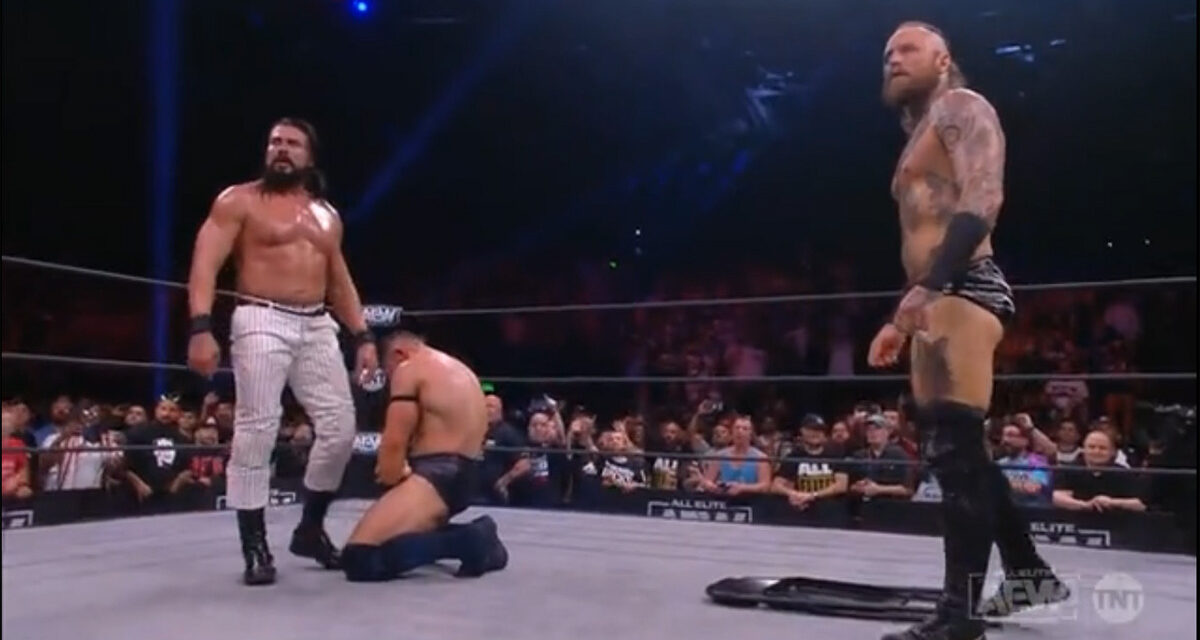 The Bastard Pac. Andrade El Idolo. Many believed neither were used to their true, full potential in the WWE. Pac and Andrade proved that to be true on this episode of Rampage which devoted half of its runtime to their bout.

Facing off against each other for the second time, Pac and Andrade would get a little help from their ‘friends’ before everything was all said and done.

Pac came roaring out of his corner like a Barbary lion driving Andrade out of ring with a snap German Suplex. Pac flew over the top rope splashing Andrade. Pac bashed Andrade into the steel barricade before rolling him back into the ring. Looking to perhaps end things quickly Pac climbs to the top rope. Before he can attempt anything, Andrade knocks him down laying the boots to him and ignoring official Aubrey Edwards as if she wasn’t even there.

Taz and Jericho talk about Andrade’s pin-striped pants and his boots. He sure is a sharp dressed man tonight. Which reminds me of this video which I must have watched a zillion times on Much Music here in Canada in my misspent teenage years. Take it away boys.

Back to the match…

Andrade goes for his running knee but Pac slips out of the way. A barrage of kicks sends Andrade crawling to apron where Pac just kicks his head like a footie ball. To add insult to injury, Pac grabs the ropes driving Andrade’s head into the ring apron with the sole of his boot. Another kick has Andrade slumped over. A knee to the head back inside the ring scrambles Andrade’s brains.

Lucky for Andrade, Pac can’t dodge fast and his boot connects with his head in a corner. It is Pac now who slumps to the mat and to the floor dazed. Andrade leaps off the ropes onto Pac on the floor hitting the barricade as he does so.

Andrade has the crowd chanting for Eddie Guerrero with the Three Amigos. Pac avoids a slingshot drop kick causing Andrade to crash and burn on the apron. He slumps to the floor holding his neck. Pac runs, leaps off the apron with a hurricanrana which has Andrade flying into the barricade and some steel chairs.

The crowd insists that feces are divine.

Pac moonsaults off the top rope onto Andrade on the floor.

A springboard cutter from the apron has Andrade’s head and neck snapping in a way that a head and neck are not supposed to. I am surprised that Andrade isn’t injured after that one. Pac gets a two count.

Andrade scrambles to the ropes to break Pac’s Brutalizer. Andrade and Pac move to the apron to battle on. After a slugfest, Andrade drops Pac with a reverse DDT on his knee and then the apron. With Pac draped over the ropes, Andrade leaps back into the ring, grabs Pac to DDT him over the ropes and onto the apron yet again.

The lights in the arena go out. When they turn back on, Andrade, who promised Pac that he has friends all over the world earlier in the show, is standing beside Malakai Black. Black spits his mist into Pac’s face stomping him into the mat. Black steps outside the ring to retrieve a steel chair as Andrade holds onto Pac.

Arn Anderson walks out from the back. Points his hand at Black pulling the trigger of his imaginary gun.

Cody Rhodes attacks laying out both Andrade and Black. A clothesline sends Andrade over the top rope and to the floor. Rhodes smashes Black with a powerslam. He picks up the steel chair while Black scrambles from the ring as the credits roll.

Earlier in the show, the TBS Women’s Championship bracket were announced. Here they are:

The official gets into a war of words with Hobbs. Hook leaps onto the apron trying to cool everything and everyone down. Hobbs puts his hand on the official’s shoulder. The official shrugs it off angrily. Cassidy pins a distracted Hobbs with a really awkward Mouse Trap.

Tony Shiavone interviews Penta El Zero Miedo and Alex Abrahantes in the ring. Penta spots two people dressed as masked luchadores in the front row. He leaps out of the ring to confront them thinking they are FTR even though they look nothing like FTR. Penta pulls off their masks. Naturally, it isn’t them but two jabronis. FTR attacks driving Penta into the ringside barricade. FTR holds up Abrahantes for Tully Blanchard who punches him in the face. FTR poses with the all the tag team gold in the middle of the ring.

Baker slaps Jay in the face as she backs her into the ropes. Jay responds with multiple punches in the face. An elbow strike and a Flatliner has Baker retreating to a corner. She lures in Jay smashing her into one of the turnbuckles and putting the boots to her. Jamie Hayter mocks Jay from outside the ring. What’s with that head of hair on Hayter? I mean, that’s a lot of hair. Am I right?Baker ends things later with a Lockjaw. Baker poses with her title, a light bulb goes off and she drops the belt. She puts Jay in the Lockjaw again. Tay Conti rushes into the ring to rescue her pal. Conti taunts Baker by parading around with the AEW Women’s Championship.

It shows you how much faith Tony Khan has in Pac and Andrade to devote half the show to their match. He wasn’t wrong to do so either. The result was a fantastic bout and well worth the time invested. Last week, Rampage had a Match of the Year candidate in Danielson and Suzuki. This week, Pac and Andrade came very close to topping that match.