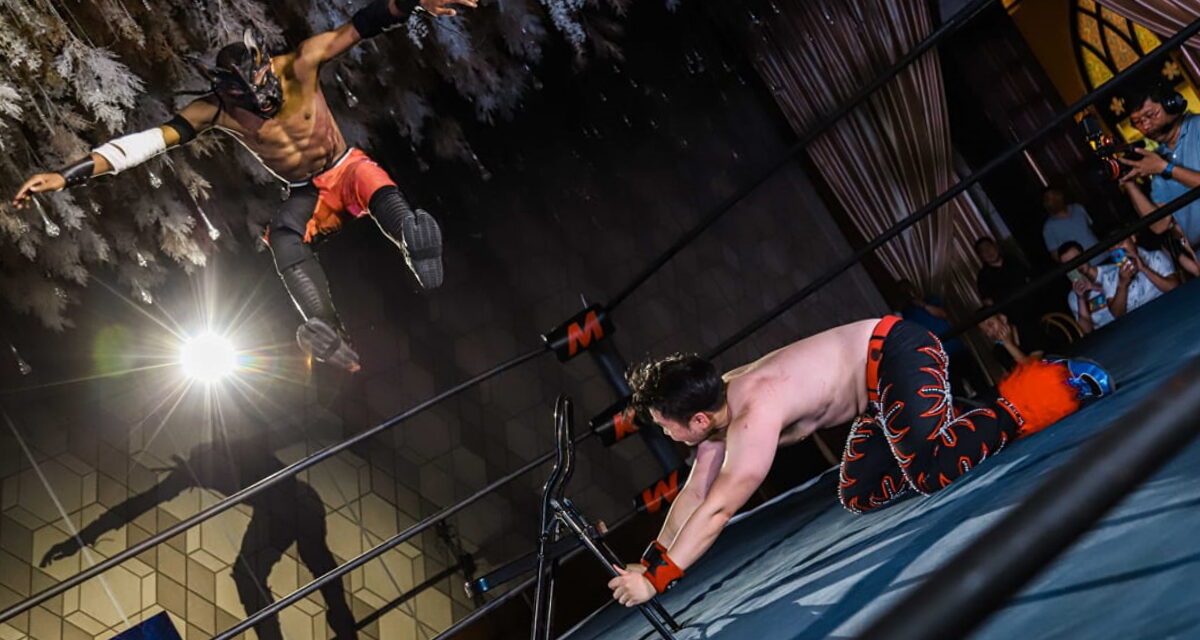 The show opens with a backstage promo in the interview area from Hong Wan. He says he is ready for Ash and is more motivated than ever since returning. We then immediately cut to MKW champ Cold Ray in what looks like a closet. He responds to Zombie Dragon’s challenge from the week prior, accepting the body bag match and he isn’t afraid.

As Ash enters he has words in a picture in picture promo saying that wrestling one on one will be a different situation than last week where he and Wan faced off in an eight man tag.

Ash lures Wan with a lockup start but immediately knees him in the gut and follows up with more strikes. Wan recoups during some forearm clubs which affect him little. He fires back with his own and then with his signature power moves, sending Ash to the outside with a powerful whip from a corner to another. As he reaches down to pull Ash in, he gets pulled out instead where Ash beats him down.

Ash continues the beating in the ring where he gets cocky and shows annoyance for the audience’s chants of “Hong Wan”. Wan shows some fight while getting spinning heel kicked, missile drop kicked and locked in submissions. Wan turns things around with a backdrop as he twists out of a hammerlock.

Wan is visibly exhausted as he hits running strikes on Ash in the corner. His cannonball and a botched snap powerslam get twos respectively after which Black Mamba shows up at ringside. This provides a distraction for his partner last week Ash to hit a superkick and then a frog splash for the win. 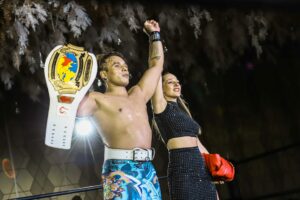 After the match Mamba and Ash shake hands as the champ exits.

Backstage Steve the ESL Teacher has some words for his former pupil Wang Tao. He explain their history that has led up to the upcoming classroom rules match where any class room items will be legal for use.

Dragon enters with robed followers and holding a book.

Ray begins the match wielding a kendo stick. He strikes Dragon with it to no effect. Dragon boots Ray and takes the stick to huge effect and also hits Johnny as he attempts to enter the ring.

With Ray downed, Dragon exits the ring, hands the book to a follower and grabs the body bag and attempts to stuff Ray in. Ray fights back and retreats to the outside but Dragon keeps beating him there. After letting a fan chop Ray he sets him up on a chair in the ring but misses the top rope leg drop hitting the seat.

Dragon produces a ladder from under the ring and sets it up in a corner. He tries to whip Ray into it but ends up eating it himself as per Johnny. 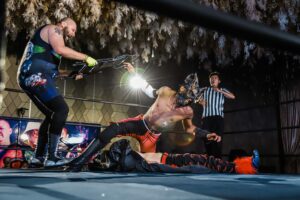 Little Johnny blasts Zombie Dragon with a chair as he attempts to stuff Cold Ray in the body bag.

As only Dragon’s head has yet to be stuffed in the bag, he mists Johnny and dropkicks Ray while in the bag. After a successful chair assisted leg drop Dragon almost stuffs Ray in the bag but Johnny prevents it again.

After a Johnny and chair assisted splash, they stuff Dragon in the bag for the win.

After the match Ray takes possession of the book and the druids carry the bagged Dragon to the back.

We are then shown a scene that occurs “Later” in a cave. Ray reads Dragon’s occult book by a fire. He says this book is what gives Dragon his power. Then he burns the book which seems to cause him physical distress. Once its just ashes, he walks away.

Only two matches this week but a lot of meat on the bone. MKW keeps trying to be different. I’d rather see a show like this with warts that takes chances than something bland and “perfect”.