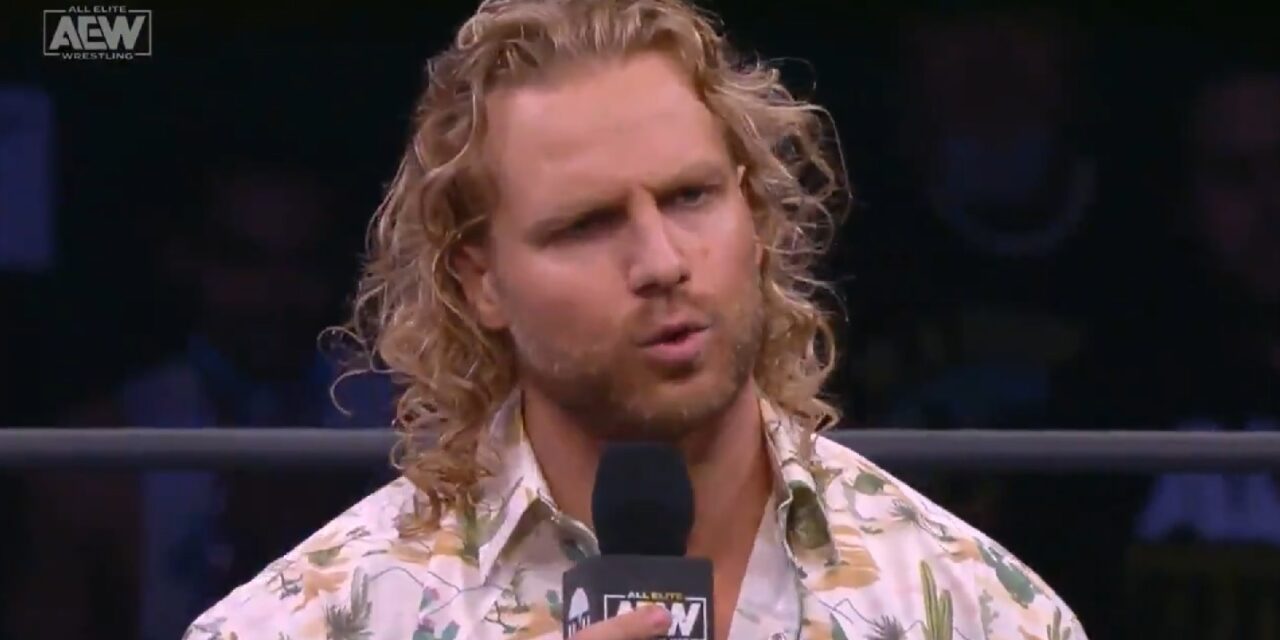 Did you forget AEW Dynamite was on Saturday this week? It’s a hazard that comes with TNT showing both hockey and basketball this year, but one that won’t be a problem once Dynamite moves to TBS in January. In the meantime, we’ll just have to pretend it’s the ’80s or early ’90s and enjoy some weekend wrestling. Let’s do that now, as we go live on TNT from Miami.

Though he was in the ring Friday night, CM Punk heads to the announce table to assist with commentary. He’s got one of the more atmospheric entrances other than his own right away as Malakai Black us up first tonight.

Martin made an open challenge to anyone in the back last week, and there’s a question among the announcers whether he may have made a tactical error since it was answered by Black. Punk thinks the real mistake may be hooking up with Rush, but that remains to be seen. What’s cool is seeing Martin stand toe to toe with Black in striking exchanges, proving he’s not just all aerial moves. Of course he does have those excellent acrobatic maneuvers and gets to show off plenty of them in this bout. Black sells damage to his ribs but is still able to catch Martin with a spinning kick to remain undefeated in AEW. The announcers put over Martin’s effort, however, and he seems to have earned Black’s respect in the form of a head nod from the ramp.

Tony Schiavone attempts to interview Jurassic Express, but the Super Elite has other plans, attacking en masse and powerbombing Luchasaurus through a table. “That’s what happens,” rants Kenny Omega. “You know the hot rumor is those guys wear fake Js,” says Punk, who also says he’s been wearing real Jordans since way back in October. Heh.

Here’s something we haven’t seen in a while: the full roster of the Inner Circle assembled in the ring. Santana gives props to the Miami fans, saying this is one of the few cities that can bring the same energy two nights in a row. They want to talk about American Top Team but don’t get too far before Dan Lambert brings his crew out to the stage, accompanied by the Men of the Year. Chris Jericho gets the fans to greet Lambert with the “fat-faced dips–t” chant, and wonders if Paige VanZant might be a bit obsessed with Le Champion. Jokes aside, Jericho challenges Men of the Year and ATT to a 10-man tag team match, but Lambert would rather mock the size of Jake Hager’s head, insult his own hometown and tell the Inner Circle they’ll have to wait a week to learn their demands for a match. A fired up Sammy Guevara says he’ll see them next week and kick all of their asses.

There seems to be some question about the identity of Las Super Ranas, but Punk cuts right to the chase: it’s clearly FTR. That’s called expert commentary, folks, especially when he points out that “they haven’t done one flip.” Rey Fenix and Penta spend a lot of time early on trying to unmask the men in the green bodysuits and luchadore matches, and lo and behold, it is indeed Cash Wheeler and Dax Harwood. Jim Ross and Schiavone compare Punk to Tony Romo for calling things before they happen, which is funny even if he isn’t 100 percent sure what he comparison means. With the charade exposed, Tully Blanchard runs down to cause a distraction, and it works as Fenix gets blasted in the face with one of the title belts, and a brainbuster finishes him off. And yes, FTR are now the AAA tag team champions.

Schiavone catches up with Rush and Martin in the back, and Lio calls tonight growing pains. He also says Dante will have a new tag team partner from this day forward, and his name is Lio Rush. Looks like this is news to Dante.

It appears there was a business deal between Andrade and MJF for the services of FTR, though MJF wants to make it clear it was for one night only.

Poor Wheeler gets the super focused, strictly business version of Mox, who runs right through him. A Paradigm Shift and a pinfall come in short order, and Moxley hustles back out through the crowd as a doctor checks on Yuta — who hopefully is not legitimately hurt.

Serena Deeb is in the midst of explaining how she has lifted up the AEW women’s division when she is jumped by Hikaru Shida. The two women brawl as Schiavone seems to have a knack for turning every interview segment into a brawl tonight.

Is the Dark Order finally back on the same page for good? J.R. takes exception to the way Uno struts to the ring, given who they’re up against. This is a really fun, fast-paced contest in the early going, making me regret a bit how little we’ve seen of Reynolds and Silver on Dynamite in recent weeks. Uno takes a page from Mick Foley’s book, taking one of Nick Jacksons’ socks and turning it into a de facto Mr. Socko. There’s another funny spot where Cole has Uno in a submission hold and thinks it is the Bucks kissing him on the cheeks only to see to his chagrin that it is Reynolds and Silver. My goodness this has been entertaining. Alas, it has to end sometime, and it does for Reynolds when he eats the BTE Trigger and Last Shot in quick succession. Jungle Boy runs down after the bell, grabbing a chair to chase off everyone but Brandon Cutler, who ends up the victim of Jungle Boy’s frustration.

A video package shows us a training session for Cody Rhodes that turns pretty physical. It’s clear that Arn Anderson wants Cody as focused as possible so he can take care of Black, though Punk questions whether this is the best way to do it.

MJF wastes no time running down the Miami fans and Justin Roberts for failing to announce him for his match with Darby Allin … but there is no match scheduled. That’s because he and the Pinnacle attacked Darby, though he insinuates Allin just no showed. He then turns super sarcastic acting surprised that Allin was assaulted and promises to give the people what they want. To that end, he has Wardlow bring out a ref to count Darby out. The lights go out before the count gets to 10 to reveal Sting, who takes out Wardlow and makes MJF flee for safety.

Britt Baker and Anna Jay argue about the merits of the Superkliq and Dark Order until Jay is fed up by Baker’s mouth and smacks her with a forearm shot. Another backstage segment for Schiavone, another donnybrook. It’s like he’s egging them on under his breath now or something.

This match inspires the announce team exchange of the night:

Punk: “Excuse me if it’s a little on the nose, but I don’t know if it’s been asked. Kiera Hogan, is there any relation?”
Excalibur: “To Ben Hogan, the golfer?”
Ross: “No, I don’t think so.”

Dead. Ford takes this one by submission to keep her recent hot streak going, though the real news here is Ruby Soho rushing down for a post-match ambush.

The Redeemer seems to be having a crisis of faith, in the sense that he’s blaming, uh, God, I guess, for giving him a weak neck. Miro seems determined to become God’s favorite champion again.

Fresh off his win in the Casino Ladder Match, Hangman Adam Page now gets a shot at Omega and the AEW World Championship, and he joins Schiavone in the ring. Page says he and his friends left ROH and NJPW to start AEW two years ago and he was excited then, but he notes that the experience has changed him. He recalls losing both matches and his confidence, his friends, and ultimately, himself. The one thing that never got lost, though, was the support of the fans throughout. “Cowboy s–t” taught him a lot of lessons, including the importance of accepting new friends and taking time off during the middle of his hottest run and being there for the birth of his son. When you fall off, you get back on the horse, Page says — that is cowboy s–t. He doesn’t know how Full Gear will go but does think the people still believe in him, and for the first time in his life, he does too. Hangman promises he will give his blood, sweat and possibly tears, but at Full Gear, he will definitely give you cowboy s–t. That was an excellent promo, the kind that inspires goosebumps.

Danielson comes right off his Friday night war with Minoru Suzuki into a matchup with Fish, which is as #NoDaysOff as it gets. It’s great to see Fish in AEW but strange to see him without Kyle O’Reilly. Maybe they’ll reunite here someday. Punk sympathizes with the physical damage the men are putting each other through, especially with kicks to each other’s legs, since he was “on the end of some bad business” recently thanks to Daniel Garcia. Fish nails a sweet avalanche falcon arrow and looks for a submission, but Danielson is able to come out on top in a battle of kicks and return the favor with a heel hook, which gets Fish to tap out.

We’re not done, as the bracket is revealed for the AW World Title Eliminator Tournament. The first round matchups include 10 vs. Moxley, Cassidy vs. Powerhouse Hobbs, Dustin Rhodes vs. Danielson and Lance Archer vs. Eddie Kingston. The tourney starts on Rampage next week, with the winner determined at Full Gear.

Don’t forget that the next episode of Dynamite is also on Saturday, so we’ll see you in seven!

This felt like it was on the way to being an average broadcast, but the six-man tag, Adam Page’s promo and the main event lit a bit of a firecracker under it. There are a lot of good things in thee works for Full Gear, which could be in the midst of morphing from excellent to special. Being on Saturdays for a few weeks may not be great for Dynamite’s ratings, but there doesn’t seem to be any problem maintaining the show’s momentum on a different night,