AEW Elevation: As filling and tasty as a Thanksgiving dinner 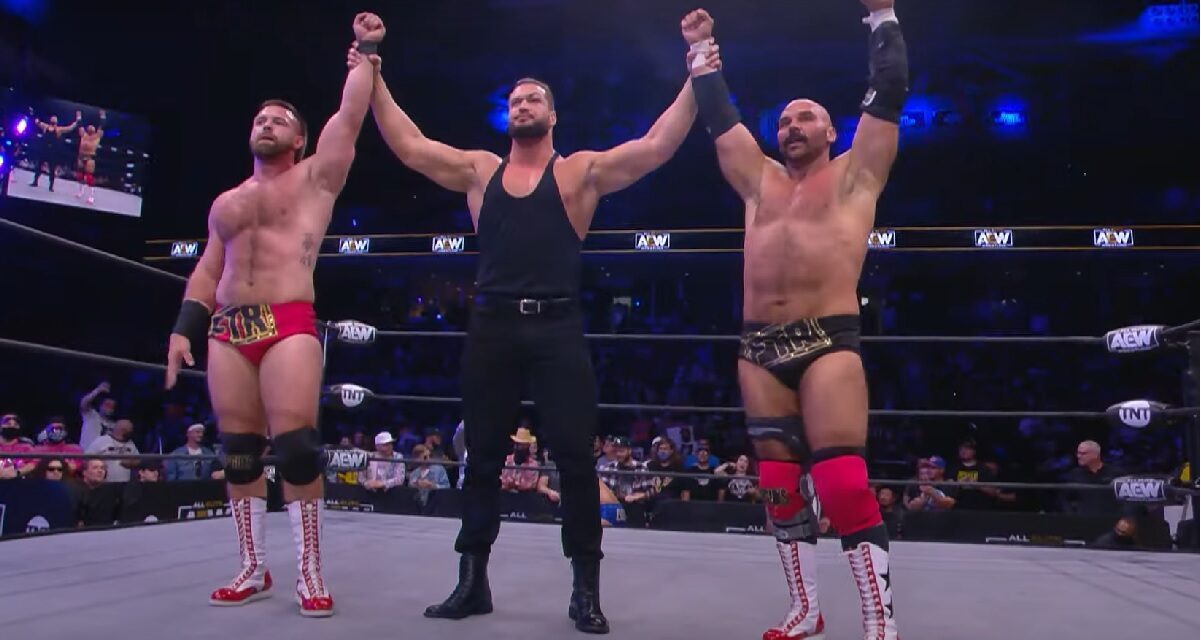 Hey yo, AEW faithful, and welcome to our coverage of tonight’s episode of Dark Elevation, taking place on Canadian Thanksgiving.

Unlike a turkey, this show flew. At a tight 50 minutes running time, this one is worth the time.

The standouts were the tag team of Lee Moriarty and LSG; in fact, I’m going to say that their match versus FTR was the match of the night, as they just put on a fantastic story.

1. Penelope Ford (w/ The Bunny) vs. Notorious Mimi. This was Mimi’s first match in AEW and she got served a traditional part of any Thanksgiving dinner: a squash. Mimi did get a nice springboard cross body in, but not much else. Mimi tapped out to the Muta lock with gusto, giving Penelope the submission win.

2.Proud and Powerful (Santana and Ortiz) vs. Matthew Omen and Adrien Soriano (w/ Gabriel Hodder). Tony Schiavone showed up in commentary for a quick match that was all tandem offence by PNP. It’s amazing how fluid PNP are when they string together double team moves. They ended this one with the Face Crusher for the pin.

3. FTR (w/ Wardlow) vs. LSG and Lee Moriarty. The match opened with some sound mat wrestling by LSG and Cash. The youngster team got in quite a lot of offence. Lee also got to work some sound ring psychology and then later some impressive acrobatics after a hot tag. But it was to no avail, as Dax hit the Brain Buster to win a very entertaining match.

4. Tay Conti (w/ Anna Jay) vs. Dani M. This was basically an extended squash that saw Conti hit the DDty for the win.

5. Joey Janela (w/ Kayla Rossi) vs. Crowbar. Janela ran down the Philly crowd on his way to the ring, and had some great lines. Crowbar slowly got the upper hand, and Janela decided he’d had too much and tried to walk to the back. But he was cut off on the rampway by none other than ECW original, the Blue Meanie, and the Philly crowd loved it.

After the match continued, the crowd started a “Let’s go Crowbar!” chant, but Kayla interfered with a Top Rope Frankensteiner. Shenanigans followed, including a chair spot, and then Joey hit a Death Valley Driver for the win. Sonny Kiss ran down to fight Joey but Kayla also got the better of Sonny and hit a Top Rope Spinning Moonsault Corkscrew. I love Janela, but like a busy restaurant on Thanksgiving, this match was over-booked.

6. Emi Sakura (w/ Lulu Pencil) vs. Ruby Soho. Ruby got a great ovation (especially for an Elevation match). Surprisingly, Emi controlled most the match, but Ruby hit a He No Future out of the blue for the win. This was an odd one.

7. Crowbar and the Blue Meanie had a taped interview about working the show, and they cut a happy, feel-good shoot promo.

8. The Butcher and the Blade & Private Party (w/ The Bunny) vs. Brock Anderson, Lee Johnson, Chuck Taylor, and Wheeler Yuta (w/ Kris Statlander). Lee Johnson and the Blade opened it up and everything they did was as smooth as grandma’s homemade mashed potatoes. Brock Anderson got some offence in (he’s getting better every week) that is very reminiscent of his dad. Wheeler Yuta dished it out and took it to both members of Private Party. Lee and Chuck got some great tandem aerial offence in, but ultimately Lee was left alone against all four members of the opposing team, leaving him prone for a fantastic clothesline by The Butcher that put him down for the three count. This was a very fun match, with a little bit of everything – like a turkey dinner with all the trimmings. Yum!