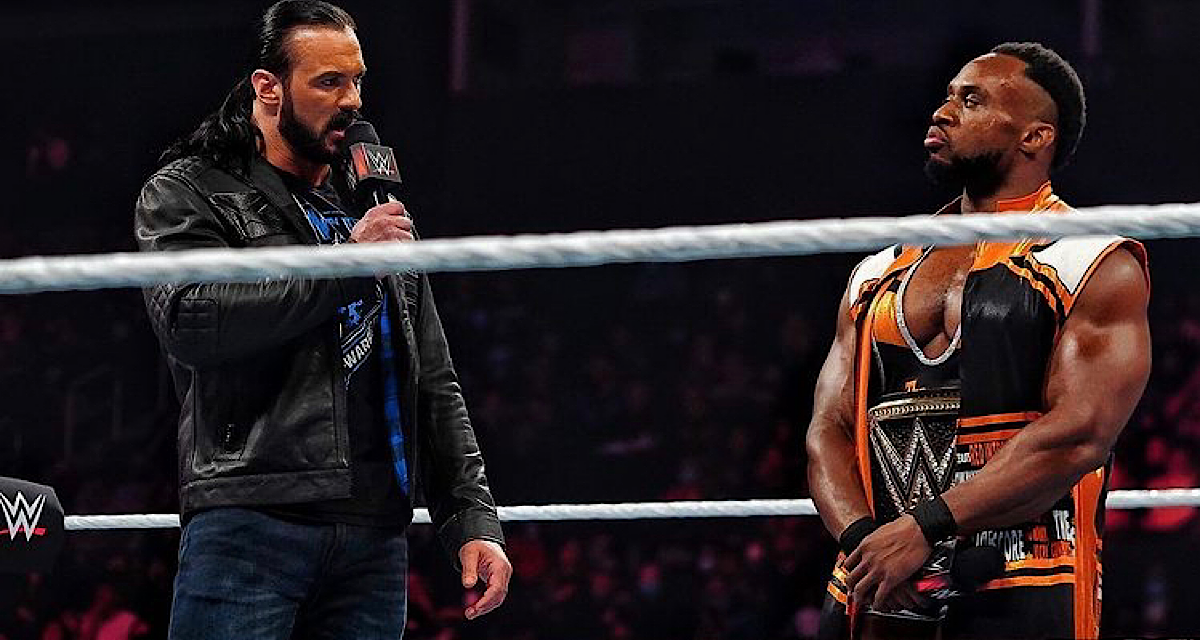 WWE returns to Saudi Arabia for Crown Jewel on October 21, and in the meantime, tournament matches are being held for King of the Ring and Queen’s Crown. The usual reporter holding down the Monday fort is being substituted tonight for a relatively sporadic red-brand viewer. And through the good, bad, and ugly, I’m prepared to ride the three-hour dragster that is Monday Night Raw.

Drew McIntyre opens the episode with a Crown Jewel testimonial — particularly regarding his WWE Championship matchup against Big E, who attended last Saturday’s Tyson Fury versus Deontay Wilder fight, of course. And because WWE Draft rules are laxer than a laxative, the Smackdown Tag Team Champions The Usos interrupt with a two-on-two challenge for tonight’s main event. Evidently, the “can they coexist” trope is taking advantage of free agency.

Xavier Woods vs Ricochet – King of the Ring First Round Match

Nearing the completion of Woods’ prophecy, he faces a badly underutilized athlete in Ricochet, who impresses again with an insane-looking superplex. After commercial, he connects with two outside dives but misses the third, allowing Woods to capitalize with his finishing springboard elbow. Woods officially advances into the semifinals, although this matchup was a highlight reel for “The One and Only” Ricochet.

RKBro is backstage as Riddle lucidly rambles away. Between the baked banter, one might’ve heard that Riddle challenged Omos to a matchup — or something like that.

Mustafa Ali and Mansoor vs Cedric Alexander and Shelton Benjamin

The Hurt Business is back apparently, but similar to the faction’s breakup, the reunion has zero momentum. Alexander hits the Michinoku Driver for a bafflingly quick victory, which prompts Ali to shove down partner Mansoor. If anything, Alexander and Benjamin reforming The Hurt Business, at least, is a reminder to count your blessings with RAW.

Commentary reminds everyone that The Miz is a competitor on this season’s Dancing With The Stars. Surely he wouldn’t accept defeat from Jan of The Office.

Brooke is surprisingly still an active roster member, and commentator Corey Graves continues the verbal assault. Will Brooke capitalize on the opportunity to prove doubters wrong? The answer is no, succumbing to Bazler’s knee strike.

Riddle takes the microphone, talking about brogurt and brotein. It’s actually a stalling ploy for Randy Orton’s nonappearance, but Omos doesn’t wait. He delivers a gigantic chokeslam, and Styles demands to see a roundhouse kick before finally putting Riddle away. Styles attempts a post-match Styles Clash, but Orton inevitably slithers in for an RKO.

Drew McIntyre and Big E argue backstage regarding The Usos’ beatdown from earlier. They ultimately shake hands, but commentator Byron Saxton asks the age-old question: can they coexist?

Bobby Lashley is in-ring, speaking about his no-holds barred match against Goldberg at Crown Jewel. “I will finally end Goldberg’s career,” says Lashley to the appeasement of many. “You can’t kill ‘The All Mighty.’”

Arguably the future of RAW, Theory is making his re-debut following the year-long NXT stint. He connects with the always-incredible rolling dropkick before Reggie and the 24/7 crew briefly interrupt. Hardy capitalizes with the Twist of Fate, but Theory — thank god — moves and hits a roll-up for three. So Theory does what Karrion Kross couldn’t, which is beat Jeff Hardy in their main roster debut — phew.

Xavier Woods and Kofi Kingston are asked about them meeting in the semifinals. Alas, they don’t answer.

Veer and Shanky accompany Mahal, and Woods sides with Kingston ringside. The former competitor gains early control, but before commercial, Kingston turns the tide with an outside dive. He delivers an awkward SOS and an eventual Boom Drop, but Mahal reverses an aerial maneuver with The Khallas for three. Words aren’t worth being wasted — much like the opportunity for a Woods versus Kingston showdown.

It’s a high-profile matchup, but “can they coexist?” Can they, Byron? They obviously cannot, as the women commence in a lifeless pull-apart brawl. Officials Adam Pearce and Sonya Deville demand that the matchup begin as partners Belair and Banks scrap before break. A handful of uncooperative tags later, Belair explicitly attacks Banks, and Lynch stands tall after a no-contest finish. Well, there’s 20 minutes people aren’t getting back.

A graphic for Monday Night Raw’s updated roster appears, and commentary puts emphasis on Edge and Keith “Bearcat” Lee. On paper (or screen), the RAW roster is stacked. But names mean zilch compared to writing and presentation.

Doudrop can’t stop dancing for whatever reason, but Natalya makes her stop with an abdominal stretch. The former escapes Natalya’s sharpshooter, and yet another roll-up occurs for the three. So, Doudrop advances into the semifinals against Shayna Baszler.

Ali gives a passionate speech towards Mansoor, saying that he “(is) nothing,” before blindsiding him. Just in time for Saudi Arabian-native Mansoor to take revenge, no?

Drew McIntyre and Big E vs The Usos

Stating the positive, The Usos never miss, and their opposition is stacked. Jimmy and Jey throw Big E into the steel steps preceding commercial and retain control afterwards. But finally, McIntyre receives the hot-tag and initiates the comeback against both opponents. He attempts the Claymore, but foolishly, Big E tags in, eating a superkick. McIntyre pulls Big E out the ring, and so it begins; the partners begin brawling around the ring as the 10-count sounds.

Although the main event never reached a satisfying conclusion (nor did many other matches, really), McIntyre and Big E fend off an assault from The Usos. But in-ring, McIntyre stands tall after delivering a Claymore to close the show.

Based on its general consensus and stigma, Monday Night Raw was more enjoyable than I expected. But, saying nothing new, three hours is a chore, and the novelty of bright lights and big production wore off by hour two. Despite an amazingly talented roster, the repetitive WWE-style matches and storylines (can they coexist, Byron?) are such a hindrance to a solid wrestling show. But, surely, this was one of 2021 RAW’s better nights — which is saying something.