MLW Fightland: A main event that Hammers home on VICE 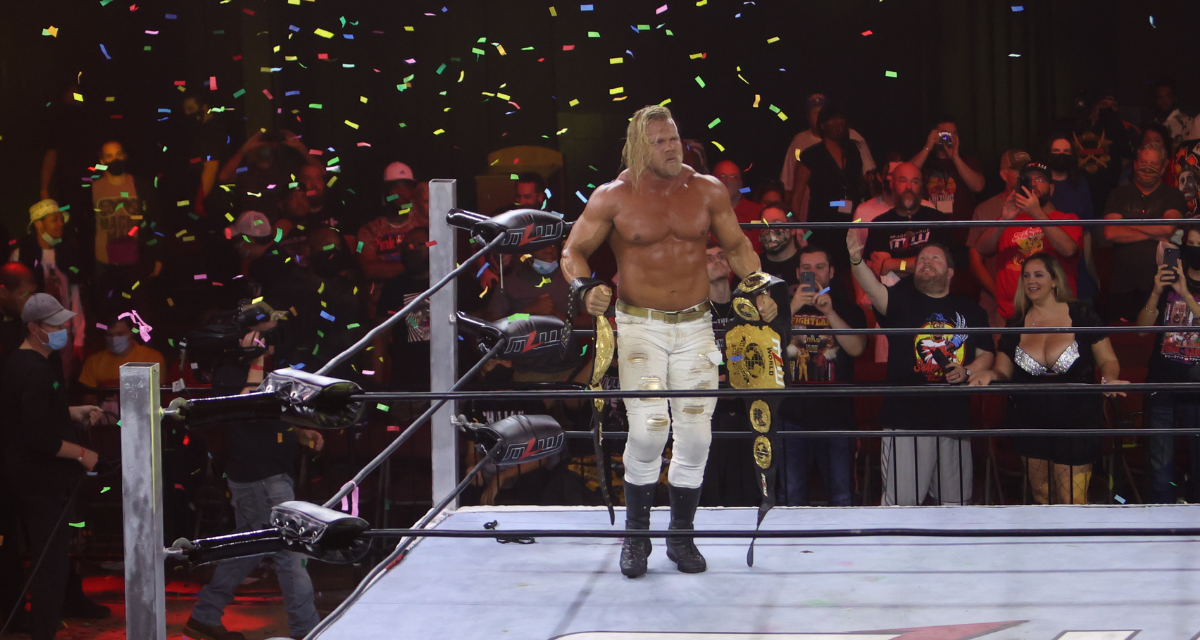 A big match atmosphere is in the ECW Arena tonight in Philadelphia, PA, as Major League Wrestling (MLW) provides a huge free-per-view event on the VICE channel for the second time, with Hammerstone and Jacob Fatu put up the MLW Openweight and Heavyweight titles, respectively, in a huge title versus title fight.

Plus, there’s a four way match for the MLW Middleweight match to get to as well, with Arez and Aramis and the returning TAJIRI vying for the strap held by Myron Reed.
Your ring commentator Rich Bocchini and fight analyst St. Laurent have the call. Now, again, you might have gotten some spoilers of tonight’s events, but don’t be that douche rocket and ruin it for everyone else. (That means you! Yes, you! The person I’m point to! Also, check your doctor. I think that rash might be worse than it is). So let’s head to the First match of the night…

The combatants are already in the ring, and the old ECW faithful are cheering loudly for the return of the Japanese Buzzsaw. Even the combatants like Aramis start with a handshake of respect, followed closely by Reed. Arez also offers his hand to a reluctant Tajiri, and he promptly reverses it into a full nelson submission, and off we go to the races

Start of the match had quick pins from each man, but no three counts. Tajiri and Reed go outside, and Arez and Aramis are in the ring. Aramis is in control, but can’t solve how to stop the “King of Strange Style.” Reed gets back in and nails a guillotine leg drop, but soon Tajiri comes back in with those vicious kicks, and he has not lost a step. From here, it is straight up “Mucha Lucha” as all four men move like coke up pinballs, with one tope suicida after another from the ring to the floor. Aramis has the best move of the night with a top rope balancing act to a moonsault onto the floor that leads to…

(Author’s Drunken Rant: Now, normally, I would find the nearest empty bottle of tequila and hurl it at the screen, whilst cursing the Monkeys in the Truck [apologies to Chris Jericho], but I seriously needed that breather.)

We return back to Aramis and Arez outside the ring. Reed delivers a beautiful flying Ace Crusher onto Aramis, and he sends him in the ring to follow up with a 450 splash to pin, but Tajiri breaks up the count. Aramis and Tajiri square up, but…silly Aramis, you got caught in the Tarantula rope submission. There is so much action that I swear everyone tapped into the Speed Force, but the big moves of the match had a Aramis hit a Spanish Fly to Arez, from outside the ring, but Arez won’t be outdone and returns the receipt with his signature half nelson driver for a two count. Arez goes up top for a splash, but is scouted by Reed who catches him in a cutter for a pin cover, but Tajiri stops that again. Tajiri whips Reed to the corner, where the ref is and he gets hit accidentally. Reed turns right to Tajiri, and he comes face to face with The Green Mist. Blinded, Tajiri measures The Young G.O.A.T., and one buzzsaw kick is enough to get the one, two, three! 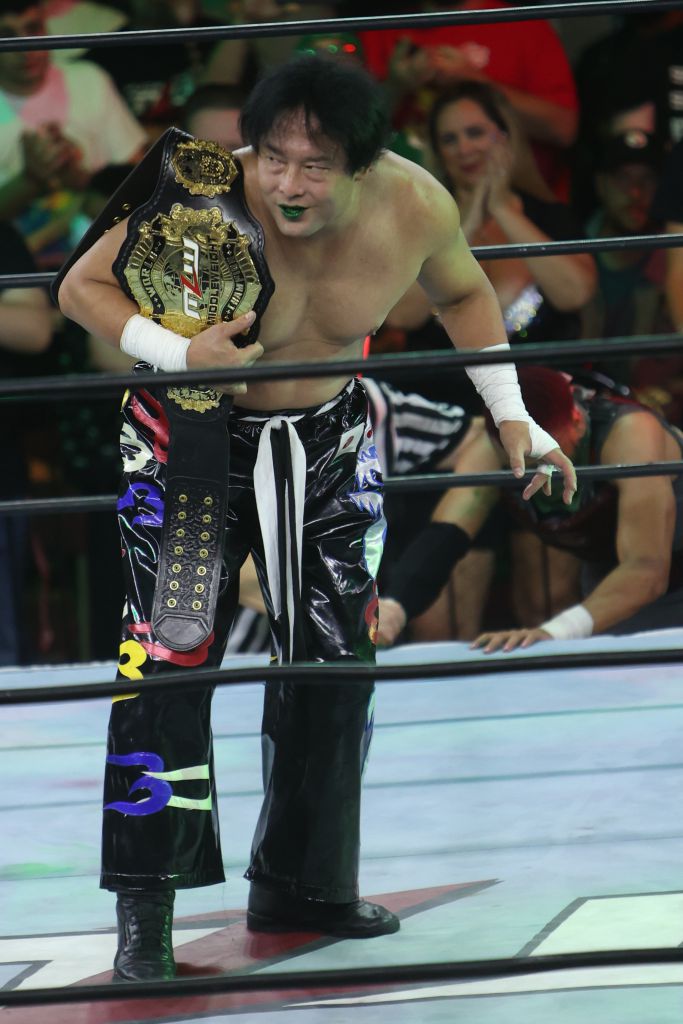 Before we can savor the win, the feed interrupts, and it’s Mads Krügger. He cuts a promo and says (with no muffling this time, so…kudos for remembering to open the flap of his mask) the Black Hand of the Contra Unit will go after Hammer before his match with Fatu, and it will be the black flag of Contra that is draped over his body. Hail…yadda, yadda, yadda.

(Huh. Strange I wasn’t invited. Must’ve been an oversight. Yeah, that sounds right.)

The format is unique in that they talk about all the affairs of what’s happening in professional wrestling, from the alleged sale of WWE, to who’s next to sign with All Elite Wrestling, and Atout offered a scoop to her peers that New Japan’s Will Osprey will be coming to MLW in the future. Honestly, this is something that scratches my itch, but it feels out of place when, y’know another wrestling match would’ve been better positioned, and this segment could’ve been a pre-show. But, hey, it was a good segment for smart fans to digest… and I’m sure they’ll invite me next time.

Back to Contra Unit with Krügger leading the charge, and they’re still seeking Hammerstone. They open a door, but meets Azteca Underground’s Los Parks delivering a Mexican style beat down, when the door closes to that mayhem. Matchmaker Cesar Duran enters the frame. Silly Contra. Ambushes are for kids.

There’s a video package that highlights the previous holders of the MLW Heavyweight championship, including Satoshi Kojima, Mike Awesome, Steve Corino, Shane Strickland, Low Ki, and “Filthy” Tom Lawlor. But, now it’s time for the Main Event, which is a …

The big story of the match is that for two and a half years, each man has held the respective number one and two titles in MLW, and after a year (along with COVID issues) of Your Boy Hammer being the number one contender, he gets to take advantage of the opportunity to truly be The Contra Killer, but Fatu has staved off challenger after challenger without breaking a sweat. This, folks, is a main event that will (to quote the philosopher Todd Keneley) go down into the “Land of the big uglies.”

As the bell rings, it is just pure smash mouth wrestling, with Your Boy Hammer firmly in the driver’s seat! Fatu lights up with chops to answer back, and gets Hammer in the corner with a running splash, but Your Boy Hammer returns the receipt with a belly to belly suplex, and send them both outside the ring. Fatu gets back in and gets Hammerstone in the corner with shoulder tackles, and follows up with whipping Hammerstone hard to each corner, wearing him down. Hammerstone goes to Fatu, who catches him in a spinning uranage to drive him hard to the mat canvas. They go outside the ring, and Fatu gets on the guardrails to deliver with a moonsault to Hammerstone. Back to the ring apron, we see chops and elbow by both men, and Fatu gets Hammerstone in a spike piledriver to the ring apron. It looks bad for Hammerstone as we go to…

Ads (Ugh! What in the name of the WWE is this happy crappy? Can’t Vice spring for picture in picture, at least?!)

We come back to Hammerstone laying prone in ring, as Fatu stalks him like prey. At this point, a steel chair comes to the mix as Fatu sends Your Boy Hammer headfirst to the steel chair wedged between the turnbuckles. Now, Fatu goes up top with the chair, and nails a Van Terminator to Hammerstone’s shoulder, but lands hard on his hip. But before we can chant “RVD” and marvel, Fatu covers Hammer for a two count. Fatu has Hammerstone in a chinlock, but he starts to hulk…err, hammer up, and nails a side suplex to The Samoan Werewolf. Now Hammer gets a big boot and an enzugiri, followed by an exploder suplex to the corner turnbuckles to the Heavyweight champ. The crowd in Philly is hyped up, with dueling chants of “Let’s go Fah-tu!/Ham-mer-stone!” A Sick kick by Hammer finds his target, and he covers Fatu for another two count. Hammer hits the ropes and gets a bicycle kick to Fatu, followed by a German suplex, and then a powerbomb to cover for one, two…nope. Hammerstone’s limping a bit from one of the moves, and we then go to…

More Ads (where’s that empty bottle to throw? Eh, better drain this one!)

We come back to Your Boy Hammer is hurting in a big way, as Fatu gets his offense going with a pop up Samoan drop, and he then follows with a swanton bomb, but Hammer rolls out before Fatu can cover him. Fatu gives chase with a suicide dive through the ropes. He rolls back Hammerstone, and as he tries to get back in, he’s met with a forearm by Hammerstone that keeps him outside. Hammer follows with a slingshot pescado to Fatu on the floor, and as Fatu comes in the ring he nails a nice missile dropkick. Both men are hurt and weary, but they meet in the center of the ring, and stare forehead to forehead, which is followed by slaps/elbows. Hammer tries to head butt Fatu, but is dazed from his effort. Fatu head-butts Hammerstone like a heavy metal fan, and leaves him in a daze as Hammerstone goes outside to clear his head. Now for the first time since the match began, Samael makes his presence known with a spike to Hammerstone’s throat that stuns the Openweight champ. As Hammer gets back in the ring to clear his head, Fatu has a table and sets up Hammer dead center in the ring, and drapes the Contra Unit flag on his carcass, and Fatu goes for the Mighty Moonsault that finds its mark. Fatu covers for one, two…no! Now, Your Boy Hammer has had enough, and tosses the flag out to the crowd, and punches away at Fatu, and follows with a running clothesline, and a powerslam. He gets Fatu in the TKO, and cover in one, two…he got it!!

After the match, chants for Your Boy Hammer thunder through the ECW arena, as the battered double champ holds both belts in triumph, as confetti rains down as we fade to black.

Final Thoughts: For an hour long free-pre-view, the big highlights of the night go to the Middleweight win for Tajiri and Your Boy Hammer winning the MLW heavyweight strap. These two matches are the biggest strength of why MLW is important to watch, as they put forth the importance and emphasis of the titles’ prestige. On a side note, there were recent reports in social media, confirmed by Hammerstone himself on Instagram that his injury was legit to his ankle, and he is hobbled up for the time being. I’m sure more will come in the days ahead.

As for opportunities, MLW could have added another match, and had their Embedded show at the beginning. Plus they could also have ran the show another hour, and had the show on a weekend, rather than less than 24 hours after their Fusion ALPHA show on YouTube (seriously, how many shows on marijuana and “Dark Side” reruns can Vice program?)

Hopefully, Court Bauer and company will address it before the next show. Right now, time to head off to bed, and see you in seven… err, six days!