Impact: Cage and Alexander stand together, and then stand off 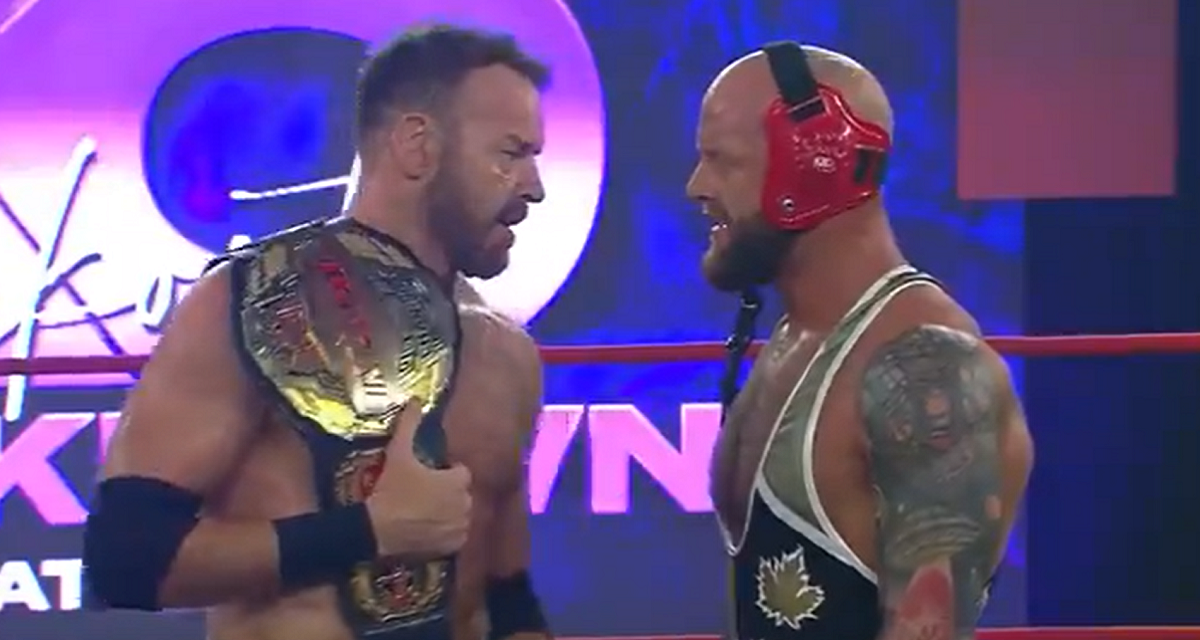 We’re only two days away from the Knockouts Knockdown special, and just over two weeks away from Impact’s biggest show of the year, Bound For Glory. Unfortunately, we’re also only a two hours removed from your Impact reporter having been hit with a crippling dose of food poisoning. Meaning he didn’t get to watch the show live, but rather quick-watched it on the PVR in the wee hours of the morning. So this report will be a bit of a departure from the norm, in that it will only briefly touch on the in-ring and instead focus on the storyline development for the upcoming shows.

The Good Brothers were shown in an inset screen watching this match. They know that the Bullet Club and FinJuice will be competing soon and the winners will go on to challenge the Brothers at Bound For Glory.

This was a good back-and-forth contest. There was some of the  wink-and-nod stuff going on that seems to be unavoidable with the Bullet Club, but when they focused on the action, it was pretty good, including a nice sequence that saw FinJuice and Sabin hit stereo dives on the Bullet Club who were standing on the floor.

An obvious finishing sequence saw Sabin take finishers by all the Bullet Club in succession, but he kicked out. For his troubles, he got low-punched by Phantasmo and hit with the Art of Finesse by Bey, who pinned him.

.@DashingChrisBey scores the win with the Art of Finesse (following a low blow by @elpwrestling). #IMPACTonAXSTV pic.twitter.com/gN4Jvm0mYZ

Gia Miller interviewed Josh Alexander, who said that, under other circumstances, tagging with World Champion Christian Cage would be an honour. But tonight, it was all about showing Christian what he is capable of when they team up to face Ace Austin and Mad Man Fulton tonight.

Heath came to the ring and talked about returning from the injury that he suffered at Bound For Glory last year. He said that during his time away, he lost contact with his best friend Rhino, because of the negative influence that VBD has had on Rhino. Heath called out Rhino to try to clear the air between them.

Rhino didn’t come out, but the rest of VBD did. Eric Young told Heath that he speaks for Rhino and that Heath won’t get the chance to talk or see Rhino again. Because the Rhino Heath knew is dead, and the new Rhino belongs to VBD. Young told Heath to leave and never come back, but Heath refused.

And the fight was on. But the numbers were against Heath, and he couldn’t overcome them. Deaner and Doering beat Heath down and then held him up so that Young could tee off on him with punches. Young then broke the VBD flagpole over Heath’s back and draped the flag over Heath’s fallen body. Rhino didn’t appear, despite the crowd chanting for him to save Heath.

This was good, and everyone played their part great.

Backstage, Willie Mack told Gia Miller that he was looking forward to being in an X-Division tournament qualifier match. Two of Brian Myers’ Learning Tree students interrupted him and started jawing to Mack and his buddy Rich Swann. A challenge was made for a match later today. The Learning Tree guys – Manny Lemons and Zicky Dice – went and told Myers about the match and he was unimpressed and discounted their chances. He and his teacher’s pet VSK dismissed their chances and then left with Sam Beale.

Lauren and Lee are now zombies after they were taken to hell by Su Yung. Frost didn’t really want anything to do with them, despite being their partner.

On the other side of the ring, Steelz didn’t want to team with Martinez and their dislike for each other was palpable, with Steelz even refusing to tag her in. Martinez ended up flattening Lee, but she hadn’t officially tagged in. Steelz, who was the legal woman in, scrambled over to get the pin after Martinez did the damage. After the match, Steelz and Martinez jawed at each other.

Lee and Lauren were watching this unfold on the ramp, and were taken out from behind by Alisha Edwards who cracked them both with a Singapore cane. The commentators said this was in retaliation for them attacking one of the Swingerellas a week or so ago.

This match was fine, but was really more a backdrop for setting up tension between some of the competitors in the tournament at Knockouts Knockdown.

In the back, Alisha was ornery and shouty. Gail Kim came up to her, and Alisha demanded a match against Kimber Lee. Gail said that she would get her chance to fight Lee on Saturday because the two of them, Savannah Evans, and Jordynne Grace would all be competing in the Monster’s Ball match.

It’s All About Us segment

Tenille Dashwood, Madison Rayne, and Kaleb were on the set, and they trumpeted their chances against Decay for the Knockouts Tag Team Championship on Saturday. They said the name of their combo finishing move is The Collab.

Decay (Rosemary and Havok) teleported in. Tenille did an extended rant that they bleeped out and covered her mouth with a graphic, just like when Bobby Heenan debated Ken Patera that one time. Decay threatened to possess Dashwood and Rayne after their match on Saturday and chased them off the set to close the segment.

Moose and W. Morrissey cut a promo and boasted about hospitalizing Sami Callihan and Eddie Edwards. They said that they may not be friends, but rather an alliance. And that they will be taking their alliance to the Call Your Shot Gauntlet match at BFG, but that the alliance will be broken when it’s just the two of them left standing.

Petey used his quickness and experience to out-maneuver his larger opponents. But that could only go for so long. Maclin, in particular, impressed with his strength, at one point heaving Taurus across the ring.

The ending moments were exciting, with everyone getting hit with finishers, including Petey hitting the Canadian Destroyer on Black Taurus. But when Petey tried to pin Taurus, Maclin came up behind Petey and dropped him with his Mayhem For All (Sit-out Tombstone Bomb) for the pin.

This was good. They have done a great job of building up Maclin since his debut and this continued the trend. At this point, though, it’s almost too bad he’s not in the world title picture. Taurus is always fun to watch and actually would be a really fun X-Division champion. Maybe another time.

Gia Miller interviewed Christian Cage who said he was confident about his and Alexander’s chances in their tag team match tonight. And said that Alexander had a chance to see what Cage can do, and will realize that he won’t be able to match Christian when they compete at BFG.

When Christian turned to leave, he found himself face-to-face with “Fallen Angel” Christopher Daniels. Daniels told Christian that he was back in Impact in order to get the one title he never held, and challenged Christian to a title match, anywhere and anytime.

Swinger and his crew were packing up Swinger’s Palace after Scott D’Amore shut it down last week. Fallah Bahh came in and told Swinger he got what they deserved. There were some really funny moments in this one, with some hilarious inside jokes, including an Otis Apollo reference, automatically elevating this segment, because Otis Apollo rules.

Swann and Mack won in completely convincing fashion. After the match, Brian Myers, VSK, and Sam Beale ran in. Myers’ stooges beat down Mack and Swann 4-on-2, and then Myers and VSK hit the killing blows to lay them out.

This was fine, assuming you care about anything involving Brian Myers.

Gia Miller was outside the executive boardroom where Scott D’Amore and Gail Kim were meeting with Knockouts Champion Deonna Purrazzo and laying down the consequences for her attack on Mickie James at James’ ranch last week. Mickie James barged in and went after Purrazzo, but D’Amore, Kim, and Matthew Rehwoldt (Purrazzo’s partner) separated them.

In addition, Gail said that each of them would be put in a Pick Your Poison match where the other one would have to face an opponent of the other’s choosing. Purrazzo’s match will take place this Saturday at Knockouts Knockdown, and she will learn who her opponent is only when she is introduced for the match.

This was a solid, by-the-book tag team match. After some early shining by Alexander and Cage, some double-teaming shiftiness saw Fulton and Austin trap Alexander in their corner and punish him for some time.

Alexander eventually escaped and tagged in Christian who did well, but then it was his turn to get trapped and subjected to an extended beatdown.

Cage finally got the hot tag to Alexander and he impressed with an F-5 type move on the big Fulton for a near-fall. Austin sneaked back in and he climbed up top to put Alexander away, but Christian threw Austin off the top and hard into the ring, and then disposed of Fulton, sending him into the ringpost.

Meanwhile, in the ring, Alexander foiled a Fold attempt by Austin by grabbing Austin’s foot and hooking in an Ankle Lock. Austin kicked himself free and went for another top rope move. Alexander moved to the side to avoid it, and when he did, Christian blind-tagged himself in. Alexander, unaware of the tag, hit Austin with Chaos Theory. Christian then dropped Austin with the Kill Switch and pinned him, while Alexander looked on in some disbelief as to what had happened.

After the match, Alexander and Christian exchanged some words and Christian condescendingly patted hm on the shoulder before leaving the ring.

This was fine and is setting up a good dynamic for the BFG title match.

This week had a lot to do, between building up the card for this Saturday while still advancing the storylines for Bound For Glory, and it found a pretty good balance. In some cases, though, that meant that matches played a backseat to the angle. Which isn’t to say they were bad. But, other than the 3-way match, which was very good, the rest was solid if unspectacular.