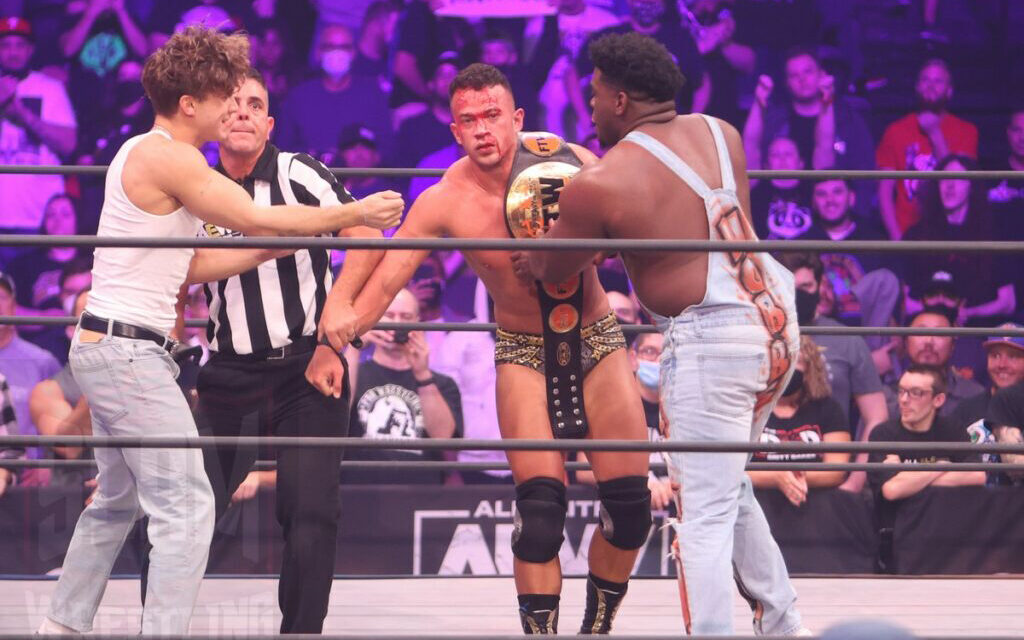 Ricky Starks is still the FTW Champion but he paid for victory in blood on Rampage. Challenger and former champion Brian Cage made Starks suffer for weeks and weeks of shenanigans in a Philly Street Fight.

Starks tried to get the jump on Cage by bringing a steel chair into the ring. Cage cut him off throwing him into a corner and unleashing a clothesline barrage. Hurling Starks from corner to corner, Cage tossed Starks head over heels with a belly-to-belly suplex. Cage picked up the chair Starks brought into the ring showing it off to the crowd. Cage rearranged Starks’ spine with two shots to the back with it.

Cage introduced Starks to the first row by heaving him over the ringside barricade and then throwing him into another barricade head-first. Stark crawled up the rampway heading for the hills. Cage grabbed Starks by the hair slamming him onto the ring apron.

It was time for some plunder to be introduced into the equation so Cage threw a garbage can, a steel pipe, a chain and part of a pool cue into the ring. Starks took over the match whacking Cage in the stomach and the face with the pool cue. A tornado DDT gave Starks a few moments to collect himself as Cage lay stunned. 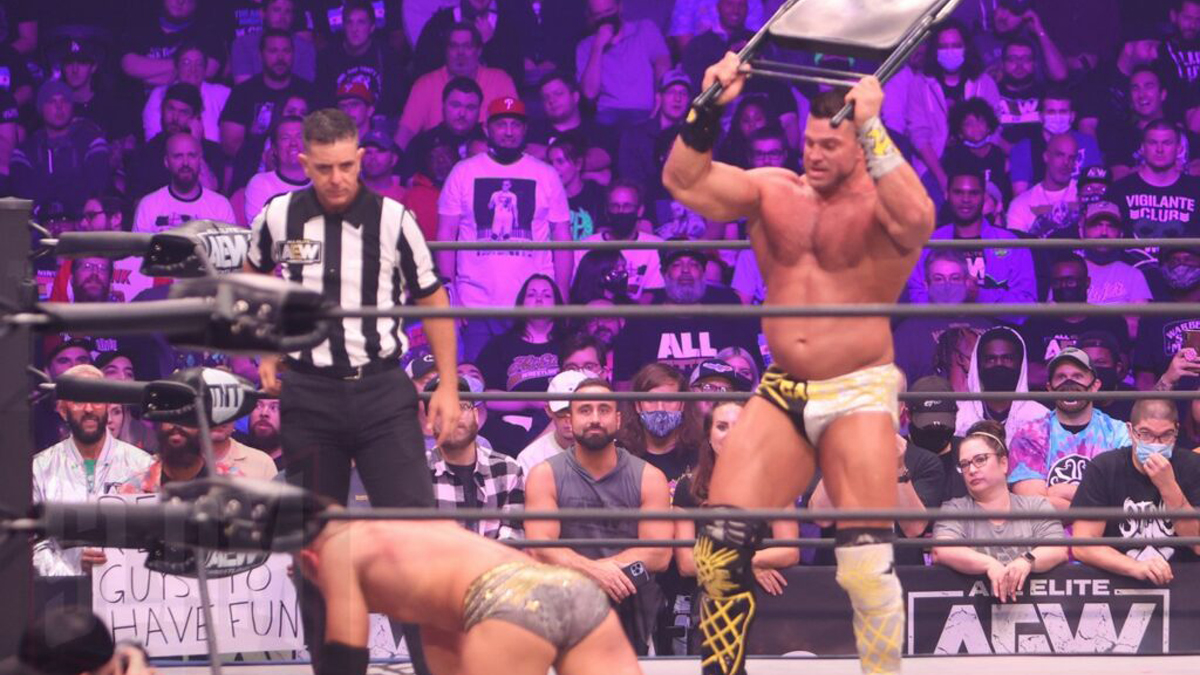 Two shots to the head with a steel chain had Cage stumbling and staggered. A leg drop with a trash can lid resulted in Cage kicking out at two. Cage dents Starks’ cranium with the trash can. A slam on the can has Starks doing the same as Cage, kicking out at two. Hook interferes picking up the FTW belt as he rushes the ring. Cage takes care of him with a clothesline. Powerhouse Hobbs is next to arrive on the scene. A super kick knocks Hobbs back out to the floor.

Starks hits Cage with the FTW title in the head and a spear for two. Before he charges Cage, Starks makes it obvious that he is pulling out *something* from his wrist tape. He charges at Cage. Cage sidesteps him. Starks collides with the steel chair set up in the corner. When Starks gets back to his feet he is of course bleeding profusely.

Cage flattens Starks with a discus lariat. As Cage is making the pin, Hobbs pulls him off of Starks. Cage kicks Hobbs in the head. Hook punches Cage in the “lower abdomen”. Stark pins Cage with his Roshambo finisher.

Garcia targets Punk’s knee with submission moves and strikes. Both men get into a strikefest with Punk unleashing some Mongolian Chops. Hiroyoshi Tenzan would be proud. Garcia has the wherewithal to turn a GTS into a sharpshooter. Garcia collides with both members of 2.0. Punk flies splashing all of them on the floor. A flying clothesline, a piledriver and an Anaconda Vice has Punk as your winner.

Backstage, Tony Schiavone is supposed to be interviewing Dante Martin. Lio Rush and Sydal get into a back and forth instead. Rush says he is going to prove his worth and that he has stroke in AEW. He promises Sydal a match against CM Punk next week on Rampage. 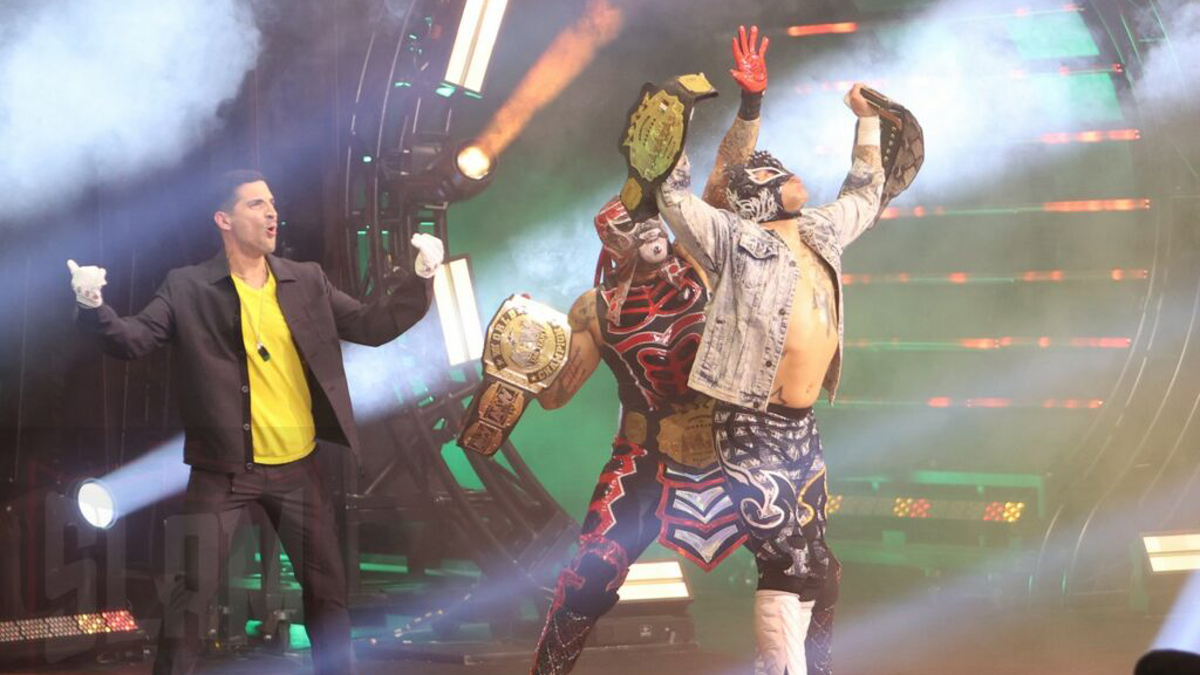 The Lucha Brothers are ready for action. Photo by George Tahinos, https://georgetahinos.smugmug.com

The Acclaimed get the drop on The Lucha Brothers before the bell even rings. They end up paying the price when the Luchas shake off the cobwebs and double team them. Rey Fénix leaps at Bowens. Bowens clocks Fénix with the boom box in the head. It is two versus one as Penta is made to fight both of the Acclaim for quite some time. Fénix is finally hot-tagged back in. Everyone hits everyone with super kicks. Tazz says the match became a Bruce Lee movie. Penta shoves Caster off the top rope. The Brothers pin Bowens.

Speaking of Bruce Lee, one of my inspirations and idols, here is RZA’s tribute to him with Be Like Water.

Cargill makes short work of Skye Blue who is just overpowered at every turn. Cargill smacks Blue around after the match. Thunder Rosa makes the save with a steel chair in hand.

Not a bad night of Rampage wrestling although it was one of the weakest broadcasts to date. Besides the street fight there wasn’t anything that was unique.