MLW Fusion ALPHA: Can the MDogg usurp the title from the Samoan Werewolf? 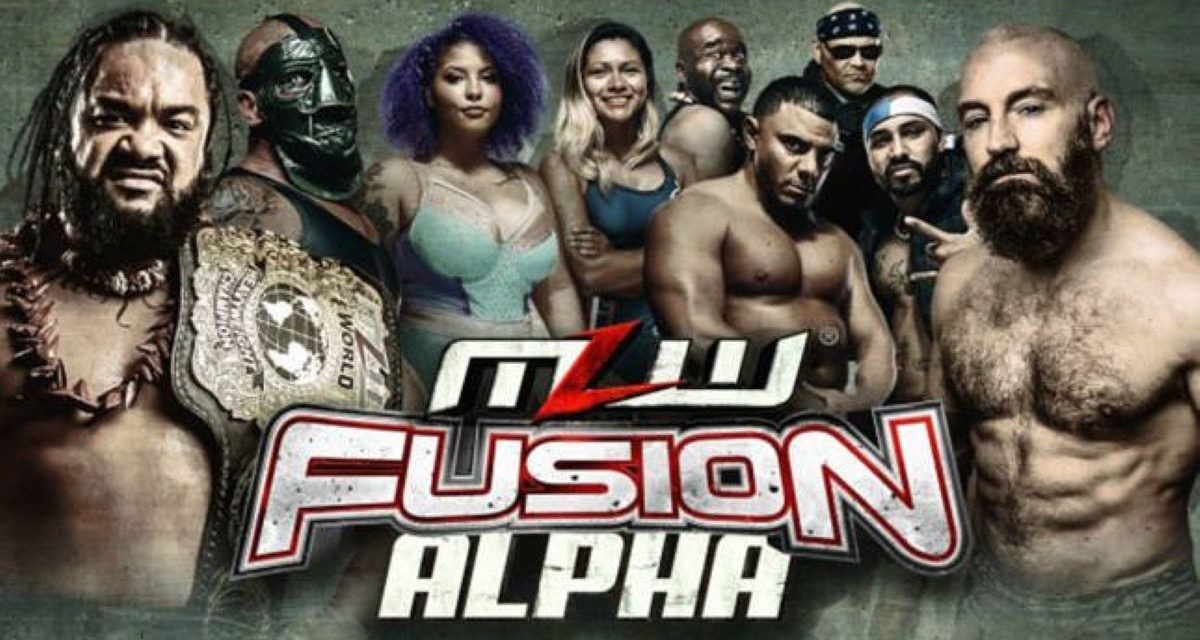 Matt Cross is the best wrestler to have never won a major singles titles.  Tonight, he gets the chance to be the spoiler to take the MLW Heavyweight strap from the Samoan Werewolf, Jacob Fatu before the big FIGHTLAND free-per-view on VICE tomorrow night.  We‘ll see how successful MDogg is, as we go to the ECW Arena in Philadelphia, PA.  Ring commentator Rich Bocchini and fight analyst St. Laurent have the call.

(Author’s Note:  If you got spoilers already from what took place tonight and tomorrow, don’t be *that* person.  Just let everyone else enjoy it.  Okay?)

We see Hammerstone try to enter the arena, but the guys from Atlas Security try to hold off Your Boy Hammer from entering.  Hammer wants Contra Unit in the worst way tonight.  We’ll see how that plays out later tonight, and we got some hard hitting action in your First Tag Team Match…

The two just plain hate each other, and they start slugging away before the bell rings.  It’s all Injustice bringing the smoke, as Reed gets Rivera with a corner lung blower to an Oliver cutter.  Then Reed goes high-flying to the outside, but the powerhouse Boogie catches Reed, and Rivera super kicks Oliver on the outside of the ring.  They send Oliver back in and 5150 utilize their tag chemistry to isolate and work over Oliver, but Oliver tries to chop back.  Oliver goes to a tag, but Smoke on the outside takes Reed’s legs out from under him to avoid that.  Now Boogie nails Oliver with a backbreaker to a uranage for a two count.

Boogie hits a springboard elbow drop and covers again, but the ref is distracted by Reed coming in.  Oliver has been in the ring too long, and now Rivera has him with a headlock, but Oliver runs to tackle Rivera in the corner, and gets a desperation thrust kick.  Oliver for the hot tag, and again Smokes yanks Reed away.  5150 try to double team, but Oliver stomps on Boogie and, makes the desperation tag to the Young G.O.A.T, and Reed is fired up.  Reed with an Axe Kick to Rivera, and then Injustice with a nice setup for a Reed power bomb to cover Rivera, but Boogie breaks the count.

#Injustice with the assisted Powerbomb!

The action spills out of the ring, and Reed eats a nasty spear from Boogie to the ring apron edge.  Oliver goes to get another cutter to Rivera, but he had the moved scouted and gets in an uppercut. Oliver is dazed and hanging on the middle ropes, when Smokes gets a slapjack to Oliver’s head, and a roll up for Rivera seals the win.

After the match, Reed still gets up, but 5150 delivers a beat down until Konnan signals them to stop the attack.  5150 then attack the ref and spray paint his back, and go after regular security.  Looks like there a big bad tag team on the block, and they’re making their presence known in MLW.

We head backstage with the “Interview Queen” Alicia Atout, who’s with the newest members of the MLW Featherweight division, Ashley Vox and Delmi Exo; The Sea Stars. Vox and Exo states that they are tag team wrestling, and now Vox’s opponent comes in gives hugs and props to the Stars for their tags and they’re crushing it with TikTok’s.  However, the “Babe with the Power” wants to show how strong she is in the ring in singles competition.  Then shade is thrown their way when Brittany Blake comes in and asks where the good vibes went?  Blake ain’t impress and walks away, leaving the rest of the women perplexed.

.@AliciaAtout caught up with some of the newest members of the MLW Women's featherweight division.

We now get a Contra Unit feed with Daivari, cutting a promo in what I assume is Farsi, wanting to lay waste to MLW, and Hammerstone enters the picture and drops bombs.  Now, Mads Krügger gets involved and they are brawling until the feed is cut.

We’ll follow that as the story develops, but let start with the first Featherweight match of the night…

For those of you not familiar, Nightingale used to wrestle in Ring of Honor, and the Sea Stars are SHIMMER tag champs.  Since this is a singles match, the story here is this a classic “Babe with the Power” (Nightingale) versus speed (Vox) matchup.  The beginning of the match favors Nightingale, as she hits the Three Amigos suplexes, and follows with a Russian leg sweep to a submission hold, but Vox escapes and reverses to a pinning attempt for a two count.  Vox gets wrist control and gets a head scissors take down to Nightingale, and then a suicide dive from ring to concrete floor.

What a maneuver from @ReelCatchAV

The crowd is amped up, and Vox delivers a spinning flatliner to cover for a two count.  Vox whips Nightingale to the ropes, but she reverses to a cartwheel into a superkick.

Now, Nightingale sends Vox to the corner, and gets a running hip attack, to back elbows to a big boot, and she finishes with a spine buster to Vox to cover for a two count.  Nightingale keeps up the offense with a cannonball senton to the corner, and then hits the high rent district for a Moonsault that misses the mark.  Vox fires up with a fishhook lariat to knock down the Babe with the Power, and she covers for another two count, and Vox is getting frustrated.

Vox goes for an armbar variation, but Nightingale is too strong and maneuvers Vox to a WillowBomb (gut wrench powerbomb) to gets the win.

Your Winner via Pinfall:  Willow Nightingale.

We go backstage, and Your Boy Hammer and Krügger are still brawling away, and it’s not letting up anytime soon.

Now backstage with Alicia Atout is with Davey Richards, and is about the competition in MLW, along with the wins and losses.  He thinks that the match with he and TJP is just getting started, and TJP comes out and smirks on how, after twenty years, it’s still about wins and losses, and he claims that’s what the “incels” care about. Richards asks Atout to leave to avoid what’s coming next, and TJP takes that moment to sucker punch The American Wolf. As refs and staff come in to break up the fight, Richards promises TJP that it’s not over yet.

We go back to regular brawling already in progress with Krügger and Your Boy Hammer, and…yep, still brawling away.

Now we head to MLW Fightland Control Center, and we get news that tomorrow’s MLW Title vs Title match with Fatu and Hammerstone is a No-DQ match.  Next is the four way match for the MLW Middle Weight match with current champ Myron Reed facing Arez, Aramis, and a returning Tajiri.

Outside, and Rivera, Boogie, and Smokes are laughing about their win over Injustice, and they want the gold in MLW.  They also wants the shoes the cameraman has, since it’s in Rivera’s size.  Dude shoulda ran when he was told to.

Guess what?  It’s time for your latest Josef Samael promo moment, as he talks about the anticipated fight for the titles.  Samael admits that Hammerstone outsmarted him…or was he outsmarted?  He states that going to Fatu is a suicide mission, and Hammerstone is the only option MLW has left.  What happens when he fails, he wonders.  He concludes that when Fatu lays waste to his carcass, he’ll burn the evidence. Hail…yeah, I get it already.

Now for your update on Mads Krügger and Your Boy Hammer and…yep.  They’re still brawling.  Now the refs and Atlas Security get involved to separate them.  Good luck, is all I can say.

We now go to the Tale of the Tape, to see how MDogg stacks against the Samoan Werewolf.

Here's the tale of the tape for our Main Event for the World Heavyweight title as the champion Jacob Fatu (@SAMOANWEREWOLF) takes on @MDoggMattCross.

Let’s now go to your Main Event for the…

The Philly crowd chants for “Fatu”, even though he is a heel (so to that I say…way to stay on brand!), and as the bell rings, Cross gets the early advantage, with high flying moves and a tope suicida to the outside to the Samoan Werewolf.  Fatu brawls with Cross on the outside, but MDogg still keeps pace and nails an impressive flagpole press to Fatu.

Cross gets in the ring and goes up top as Fatu rushes him, but he cartwheels away.  Unfortunately, he can’t avoid a dropkick by Fatu.  Now it’s all Fatu, as he nails a falcon arrow, and successive diving headbutts to cover for a two count.  Cross tries to get some offense going with a crossbody, but it gets reversed to a swinging uranage.

Fatu ramps up the violence by sending cross through the corner, and his should connects with the ring post. Cross tries to defend himself, but…naaah. That’s not happening as Fatu hits a vicious Samoan drop, as he just toys with Cross.  But that proves to be a mistake, as Cross hits a standing senton to cover for a two count.  Cross tries to hoist Fatu on his shoulder for his signature Urbanizer, but Fatu is too big and he manhandles Cross into a springboard handstand Moonsault to cover for a two count.  Cross still has some gas in the tank, and gets a double stomp to Fatu, and he launches himself for a tope suicida to Samael on outside.  Fatu gives chase and does what I can best describe as a Space Flying Samoan Splash™ from the ring to concrete floor.  Fatu brings Cross back to the rings and shoot him to the ropes, but he slingshots back with a rebound cutter to cover for one, two…no!

.@MDoggMattCross with a Rebound cutter!

End of the match has Samael call out his Sentai Death Squad to put Cross in a body bag and stretcher out of ring.  As he’s carted outside, Samael says to take him away, and Hail…wait?  Hammerstone?!  Now Your Boy Hammer brawls with all of Contra Unit as the show fades too black.