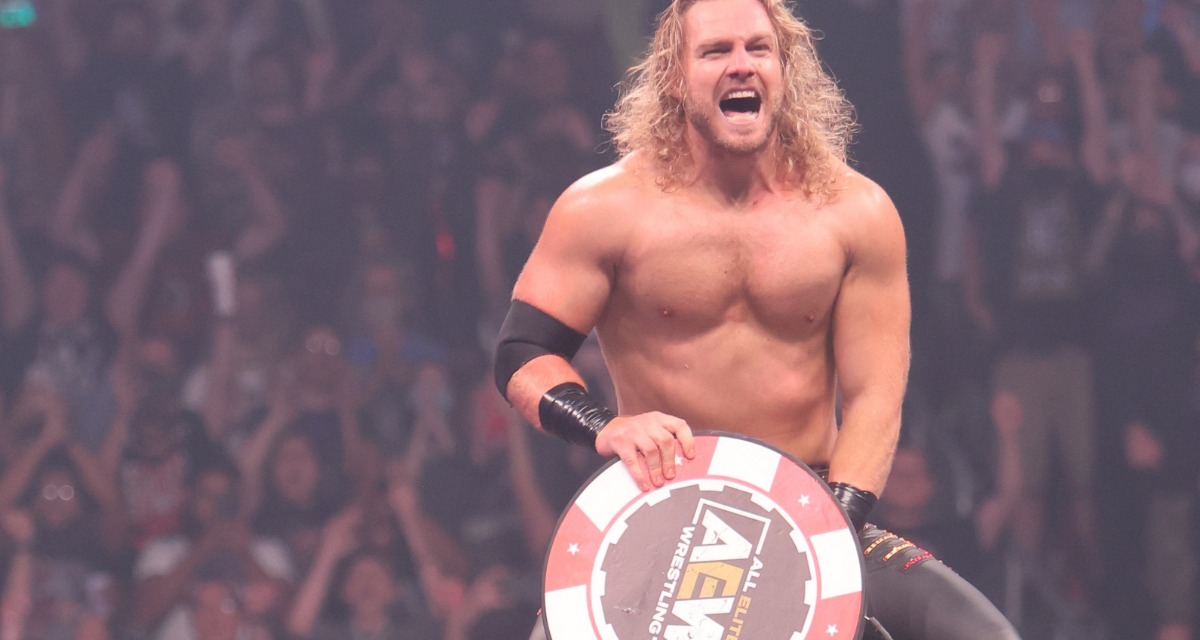 It’s Wednesday night and you know what that means! Usually it means Nick Tylwalk is bringing you the AEW recap for SLAM Wrestling, but he’s off to New York Comic Con, so I’m filling in. Tonight is also Dynamite’s two year anniversary, and here I didn’t get them anything. Dynamite is almost in my backyard tonight in Philadelphia, so let’s get to the show.

Jungle Boy takes beating for most of the match, unable to tag out. Danielson finally gets a tag and stands face to face with Kenny Omega. The two trade blows in the middle of the ring. He ducks a strike and takes down Kenny with a clothesline and follows with a flying knee in the corner. Danielson with a hurricanara from the top rope and then hits the flying headbutt. The Young Bucks break up the pin. Brian with a tiger suplex into the cattle mutilation. Nick Jackson breaks it up with a dive off the top rope.  Luchasaurus slam Adam Cole onto Omega and then hits a moonsault on the outside.  Kenny Omega takes out everyone on the floor with a plancha over the top rope.

Back in the ring, Luchasaurus choke slams Cole for a two count. A V trigger from Omega stops Jungle Boy from helping out the big dinosaur. Cole then low blows Luchasaurus. The Elite can’t powerbomb the big man and they turn their attention to Jungle Boy. Cole hits the Panama Sunrise on Jungle Boy, but Danielson breaks the pin. He then takes on the Elite by himself. Omega catches a roundhouse kick and Brian take three super kicks at once. Jungle Boy gets hit with a 4 way BTE Trigger and is covered Omega, who picks up the win.

Winners via pinfall: The Super Elite

Jon Moxley is mad and has lost all his patience. He knows there’s no man that can pin or submit him, but tonight he has to deal with ladders. He’s going for his belt. CM Punk at AEW Dynamite on Wednesday, October 6, 2021, at The Liacouras Center in Philadelphia, PA. Photo by George Tahinos, https://georgetahinos.smugmug.com

CM Punk is in the house! Punk is still so happy to be back. He tells the Philly crowd that he will wrestle tonight or everyone gets a cheesesteak. Pat’s or we riot! The Philly crowd wants to see him in action, so he calls out Daniel Garcia and wants him in the ring on Rampage.

Arn Anderson is burning stuff in Cody’s backyard. He isn’t pleased with Rhodes and is burning one of his suits. He wants Cody’s tie and tells him to paint a star on his face. Cody doesn’t want him to burn it, but Arn just slaps him.

Fish and Guevara trade shots in the middle of the ring to start. Sammy is shot off the ropes but is able to catch himself to avoid a kick. Guevara connects with a single leg drop kick, but gets chopped off the ropes and crashes to the mat. Fish with a senton over the ropes. Fish looks for another senton, but Sammy gets his knees up. He follows with a running back elbow. Guevara explodes out of the corner with a knee strike. Fish with a back drop driver into a pin, but only gets a two count. Sammy with a Spanish Fly and pulls himself up to the tope turnbuckle. Fish cuts him down again. He delivers a Falcon Arrow from the top turnbuckle. Fish can’t make the cover immediately and Sammy kicks out. Fish with an exploder into the turnbuckle, but still can’t get the pin. Sammy his the GTH and covers Fish to get the pin.

Dan Lambert and crew make their way to the ring and I don’t think they are going to congratulate Sammy. They beat down Guevara. Fuego del Sol tries to make the save and gets beat down for his effort. Scorpio Sky puts the boots to Sammy until Chris Jericho and Jake Hager runs down. They clear the ring.

Dan Lambert grabs a microphone, demanding that Jericho’s music gets cut. He challenges Jericho on Top Team’s behalf to a match in Miami. Jericho accepts the match.

The Acclaimed cuts a rap promo on the Lucha Brothers.

Tony Schiavone announces that Dynamite is moving to TBS on Jan 5th, 2022. They are introducing a new championship. It’s will be the TBS Championship in the Women’s division. There will be a tournament to decide the inaugural champion.

Jim Ross interview Darby Allin early in the day. Ross wants to get to the meaning of the face paint. Even though MJF made it public, Allin paints his face because he feels half dead inside. He has faced death and is still here.

Before the match, Allin launches himself off the ropes to take out Comoroto and Marshall on the floor. The match starts. Allin can’t overpower Comoroto and gets power slammed to the mat. Allin hits a stunner out of the corner and follows with a coffin drop. He covers and gets the pin.

After the match, Marshall hits a diamond cutter on Sting, who gets ring back to his feet. Sting nails a low blow and drops QT with the Scorpion Death drop.

The Dark Order is back on the same page, with Evil Uno wanting to give everyone a say in what they do. Although, Ana Jay is clearly emerging as team leader. Tony Schiavone is in the ring with Dante Martin. He puts himself over and then issues an open challenge. He will fight anybody that AEW brings him. The lights go out. Malakai Black appears behind him. Black spits the mist in Martin’s face and nails Black Mass. The lights go out again. When they come back up Martin is gone. Black tells Martin that he accepts.

The FTW Champion, Ricky Starks, is in the ring with the original belt since it was born in Philadelphia. Starks has the same mindset as Tazz, which is more than he can say for Brian Cage. He was going to challenge Cage but he isn’t here. Or is he? Cage runs down to the ring and jumps Starks. Team Tazz quickly pull their boy out of the ring.

A win tonight would give Shida 50 wins, a first for a woman in AEW. Serena has Shida on her toes. Shida is impressed, but Deeb doesn’t want to be patronized. Shida mounts Deeb in the corner and drops fists on her. She hits a running knee lift on the apron. Shida pulls out a chair, but takes too much time. Deeb chucks it back under the apron. Serena catches Shida coming into the ring and drops her.

After a commercial, Shida with a front face lock airplane spin. She follows with a missile drop kick, but Deeb kicks out. Serena locks in an octopus. Shida misses an enziguri but connects with a knee strike. Deeb rolls to the floor. Shida with a cross body off the apron to the floor. Deeb catches Shida in the ropes with a dragon screw and hits a swinging neck breaker. Shida with a rising knee strike and then avoids a chop block. Shida with a Falcon Arrow but still can’t get the pin. Deeb blocks a knee strike and Deeb hammers on the leg. Deeb with an eye rake and an inverted dragon screw. She hits the Detox, but can’t get the pin. Deeb locks in the Serenity lock and Shida taps.

After the match, Deeb grabs the plaque meant for Shida and hits her in the head with it.

Darby Allin gets jumped by a group of masked men after accepting a challenge from MJF. Those masked men were probably the Pinnacle.

Lio Rush is a big fan of Dante Martin. He wants to talk business and take Martin under his wing.

Dr. Britt Baker loves the idea of the TBS title. She tired of all the other women in AEW being jealous of her.

Who ever climbs the ladder to retrieve the casino chip will get a future AEW Championship match. Orange Cassidy and Pac face off to start the match. Pac stops Orange from putting his hands in his pockets. The two lock up and Pac takes him down. Pac is not amused with Cassidy’s antics. He goes for a stomp but Orange quickly rolls to the floor. Pac hits a back breaker and tosses Orange to the floor. Pac grabs a ladder , but Cassidy is all ready back in the ring. He shoves the ladder back to the apron.

Andrade grabs a big ladder, but Pac with drop kick before he can get in the ring. Pac sets up the ladder in the middle of the ring, but Andrade leaps off the ropes to meet Pac on the top. Andrade with a sunset flip off the top of the ladder. Orange Cassidy with the shin kick, so Andrade chops him in the chest. Cassidy takes Andrade down with his hands in his pockets.

He hits Orange with the Side Effect and then clears the ring with a ladder. Cassidy restrains Hardy, not allowing him to climb the ladder.

Archer clears the ring and takes his time to set up the ladder. The countdown starts and Archer stops to watch.

Mox and Archer fight on the floor. Moxley throws a chair at him and follows with a running knee strike. In the ring, Orange hits the Orange punch on Archer. He tries to climb up the back of Archer to grab the chip, but Mox stops him.

The Joker is Hangman Adam Page. Philly goes crazy. He goes right at Moxley. Page takes him over the top. He sends Archer to the floor. Orange Cassidy is taken down. A kick take down Andrade. Pac nails Page with a chair and puts the boots to him. Pac sets up a ladder in the corner and then grabs a table. He lays Hangman on the table and climbs the ladder. Andrade stops Pac at the top of the ladder and the two do battle. Andrade is knocked to floor, crashing off a ladder. Page catches Pac at the top of the ladder and drops him with the Deadeye through the table.

That’s the show. Nick Tylwalk will return next week.