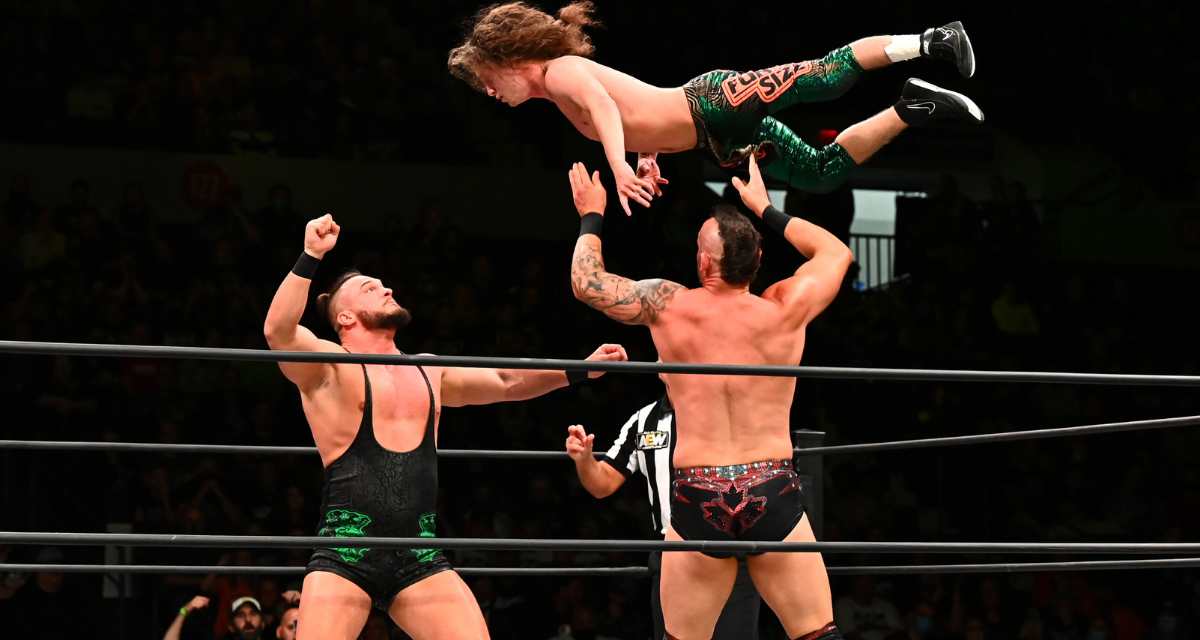 Hey Yo, AEW faithful, welcome to another edition of the AEW Dark and Dark Elevation recap for the week of October 4th. My name is Jordan James Embleton, and I am taking over the recaps for these shows.

This week’s Elevation came to us from Rochester NY, while Dark was taped out of Universal Studios. The difference in the crowds at the venue, in some ways, gave the shows a polar opposite feel. While the large and rowdy crowd in Rochester was great for the younger stars to get in front of and made the show feel important, the amusement park patrons in the Dark venue made it feel somewhat subdued compared to what I’m used to. Fortunately, that didn’t make it a bad show overall. Indeed, it was fun, and the show did what it did best: showcase excellent in-ring work from younger talent, like some of the standouts – Anthony Henry, Vary Morales, and Santana Garrett – who all went down swinging in great hard-fought matches, and made me want to see more from them.

It’s hard to pick between the Wing Men and Chaos Project as to who are AEW’s best jobbers. Both teams are so good at losing (and I mean that in the best possible way) but this week it’s not Chaos Project because Serpentico got his first AEW singles win and it was fantastic. The main event had Orange Cassidy in it, but the real story is Nick Comoroto; he’s the biggest, strongest, and most fun to watch B-team guy that I can think of.

Eddy Kingston joined Paul Wight and Tony Schiavone on commentary, and never stopped talking – but that’s not a bad thing, as he is fantastic at rambling colour while Paul and Tony struggle to get a word in edgewise.

1) Skye Blue vs. Emi Sakura & lulu Pencil. Skye Blue seems set to become a star but tonight was not the night as she went down to the Vetran Sakura’s Queens Gambit.

2) 2Point0 & Garcia vs. 1man Thrill Ride, Justin Corino & Shayne Stetson. 2.0 and Garcia are a great paring. The aggressive nature of Garcia’s style and 2.0’s brawling got them the easy win with Garcia’s Red death lock

3) Shawn Spears and Wardlow vs. Marko Stunt and Fuego Delsol. Fun tag match, between two big men and two little high flyers. The finish was a fantastic variation of Wardlow’s solo knee strike, as Spears gorilla-pressed Marko Stunt and dropped him into Wardlow’s “casualties of war “.

4) Lance Archer (w/ Jake Roberts) vs. Louis Bruno. Bruno was very big, so it was impressive that Archer could give him the Blackout but he did and got the 3 count.

5) Abadon vs. Davienne. Abadon is great. This was basically a squash match with a face buster finish.

6) The Gunn Club got a promo vignette

7) Santana & Ortiz vs. Kodama & Obariyon. PnP are so smooth and got the win with a double team face plant. Short match but lots of action.

8) Kris Statlander vs. B3cca. Statlander out-powers B3cca at every turn and gets the Big Bang Theory for the win.

9) The Acclaimed vs. Colin Delaney & Cheech. This wasn’t quite a Squash match as Colin and Cheech got lots of offence in, but the outcome was never in question as the Acclaimed get the mic drop in and the win.

10) FTR (w/ Tully Blanchard) vs. Elijah Dean & Zach Nystrom. The highlight was FTR’s new music, as it was a 10 second squash with FTR hitting the Big Rig finisher as the first move.

11) Sonny Kiss vs. KM. KM looked really good in defeat here. Sonny hit the Split Shot on the much bigger KM for the win. After the match, Joey Janela and Kayla tried some shenanigans but were caught in their tracks and Sonny stood tall

1) Pinnacle members FTR, Wardlow, and Shawn Spears vs. Baron Black, Dean Alexander, Erin Fry, and Austin Green. Spears got his team the win with the C4

2) Abadon vs. Valentina Rossi. Aabadon hit some sort of DDT/driver for the win. This was not much more than a extended squash match, but Abadon’s persona and brawling style mixed with Rossi’s quality selling made it fun.

3) The Acclaimed vs. Michael Martinez & Vary Morales. Morales showed some cool offence – keep an eye on him. Max Caster with the flying elbow for the win.

4) Kal Herro vs. Sonny Kiss. Herro got some genuine crowd reactions but Kiss got the win with the Split TKO.

5) Zeda Zhang vs. Kris Statlander. Statlander with the most awkward spider crab submission for the win.

6) Skye Blue Vs Madi Wrenkowski. Fisherman suplex for Sky Blue’s first AEW win. It might be time for Skye to string some wins together!

7) Anthony Henry vs. Eddie Kingston, Anthony Henry is great in the competitive match, and I can’t wait to see more from him. But it was Eddie who got the win with the DDT.

8) The Gunn Club vs. Rosario Grillo, Hunter Knott & Cameron Stewart. Austin Gunn got the pin with a high stack rollup.

9) Diamonte vs Santana Garrett. Diamonte lands a rollover cutter for the win in a very fun match.

11) Erik Lockhart vs Daniel Garcia and 2.0. Garcia never fails to entertain, and he did it here, hooking on the Red Death Lock for the win in a very good match.

12) Serpentico vs Marko Stunt. SERPENTICO GOT HIS FIRST SOLO WIN!!!!!!

13) Nick Comoroto (w/ The Factory) vs. Orange Cassidy (w/ Best Friends). This was a great match, and you should do yourself a favour and watch it. You know Orange had to win, but they did a good job of protecting Nick as a monster heel throughout, and even with the finish, which saw him take two Orange Punches and a Beach Break before going down for the count. 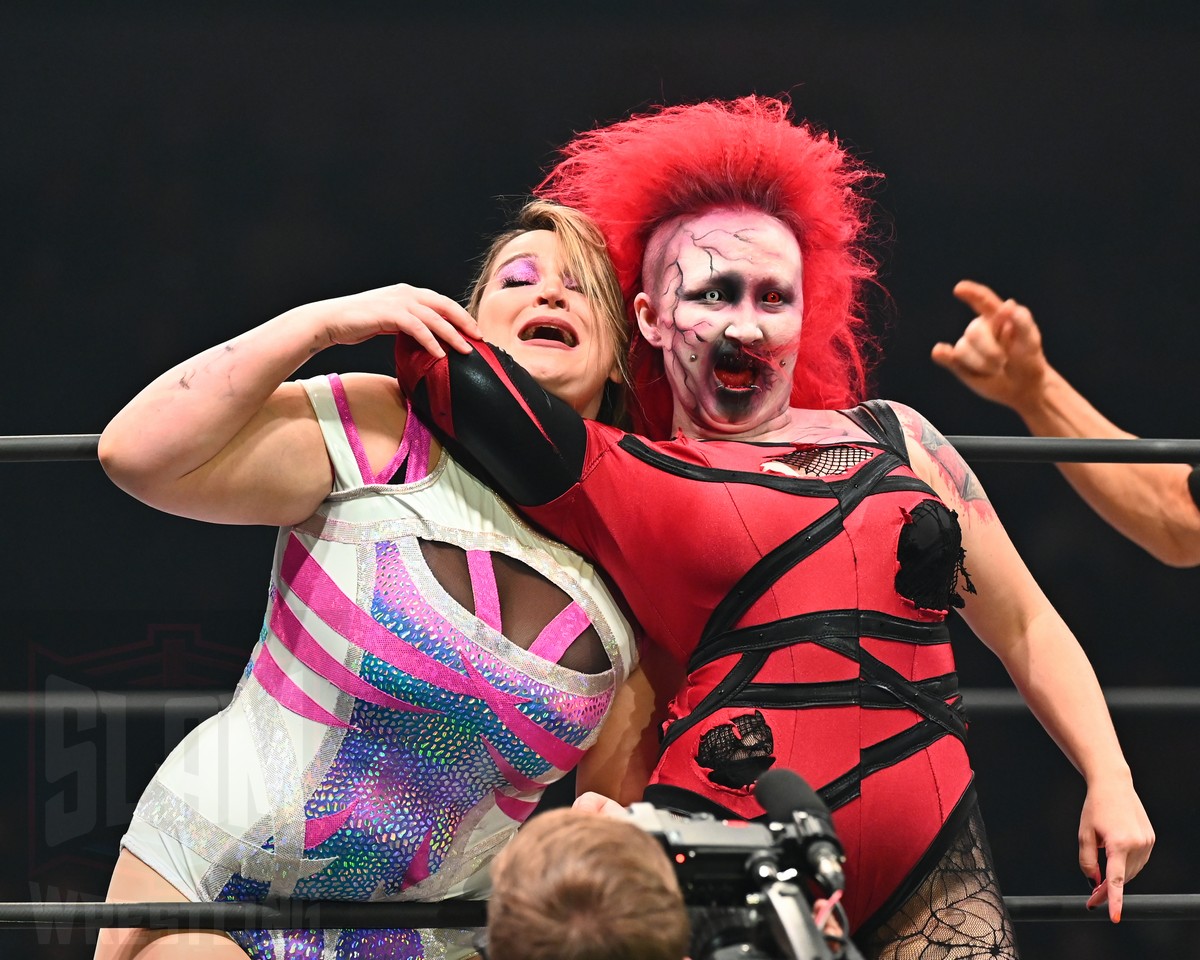 Davienne panics in the arms of Abadon at the Blue Cross Arena in Rochester, NY on September 29th, 2021. Photo by Joe Hrycych, www.hrycychphotography.com 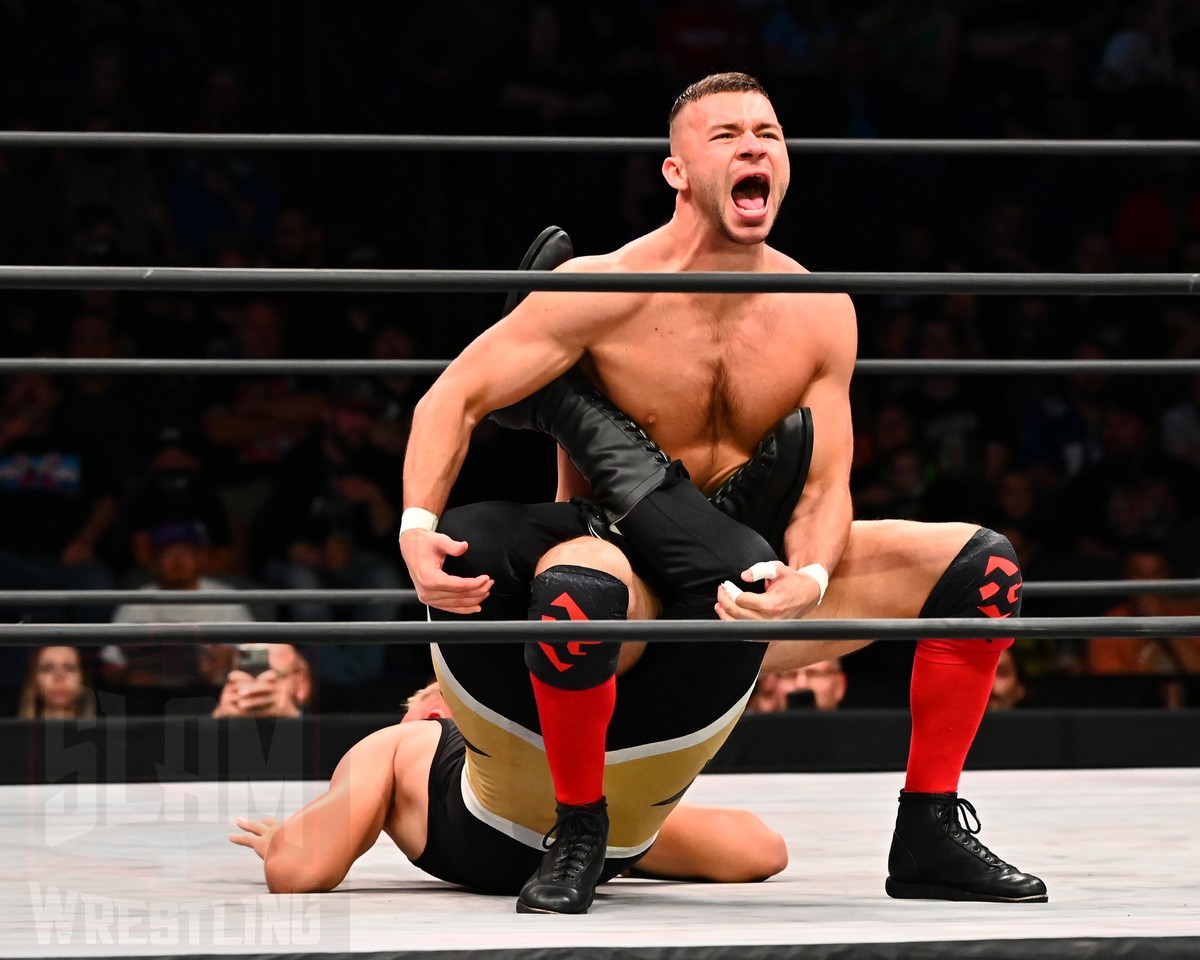 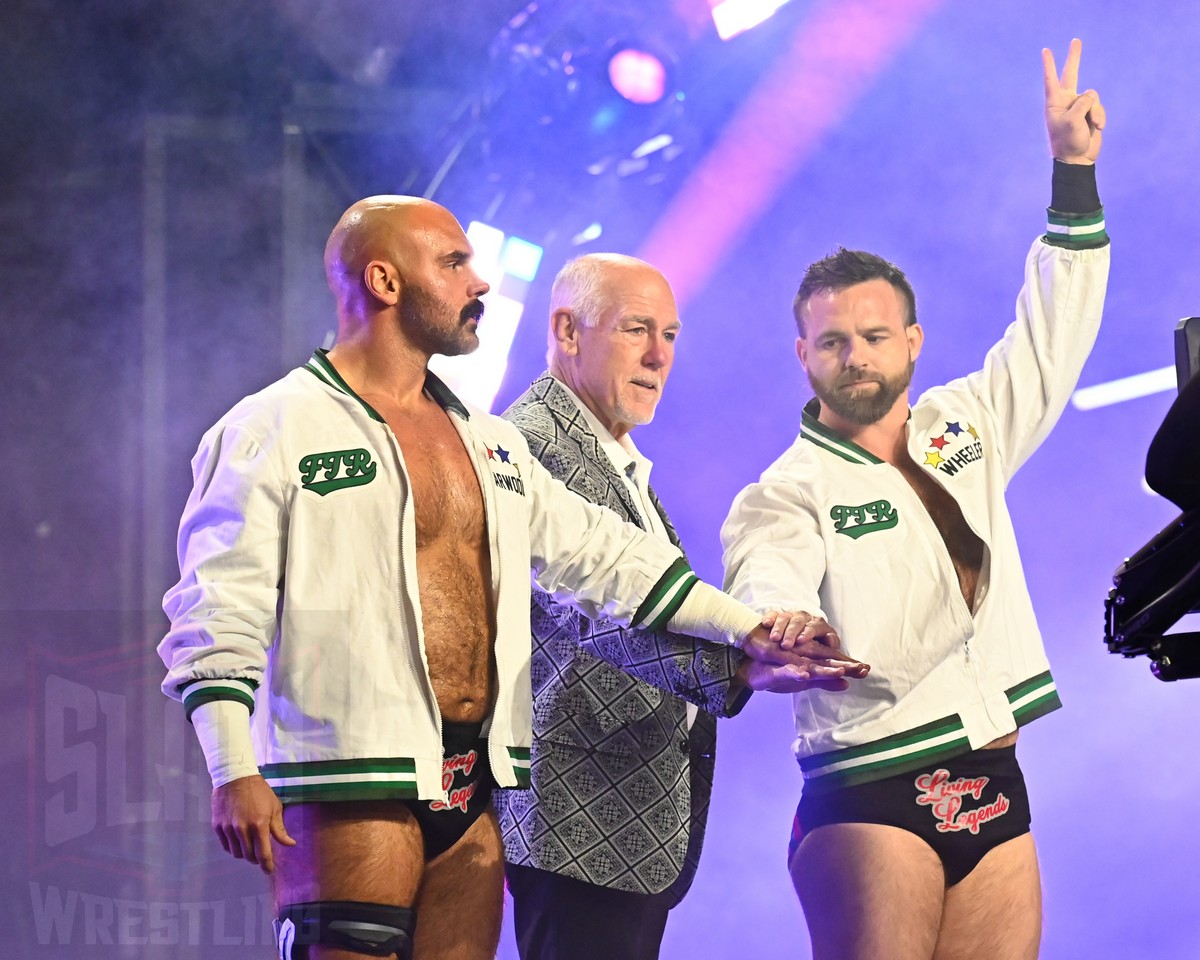 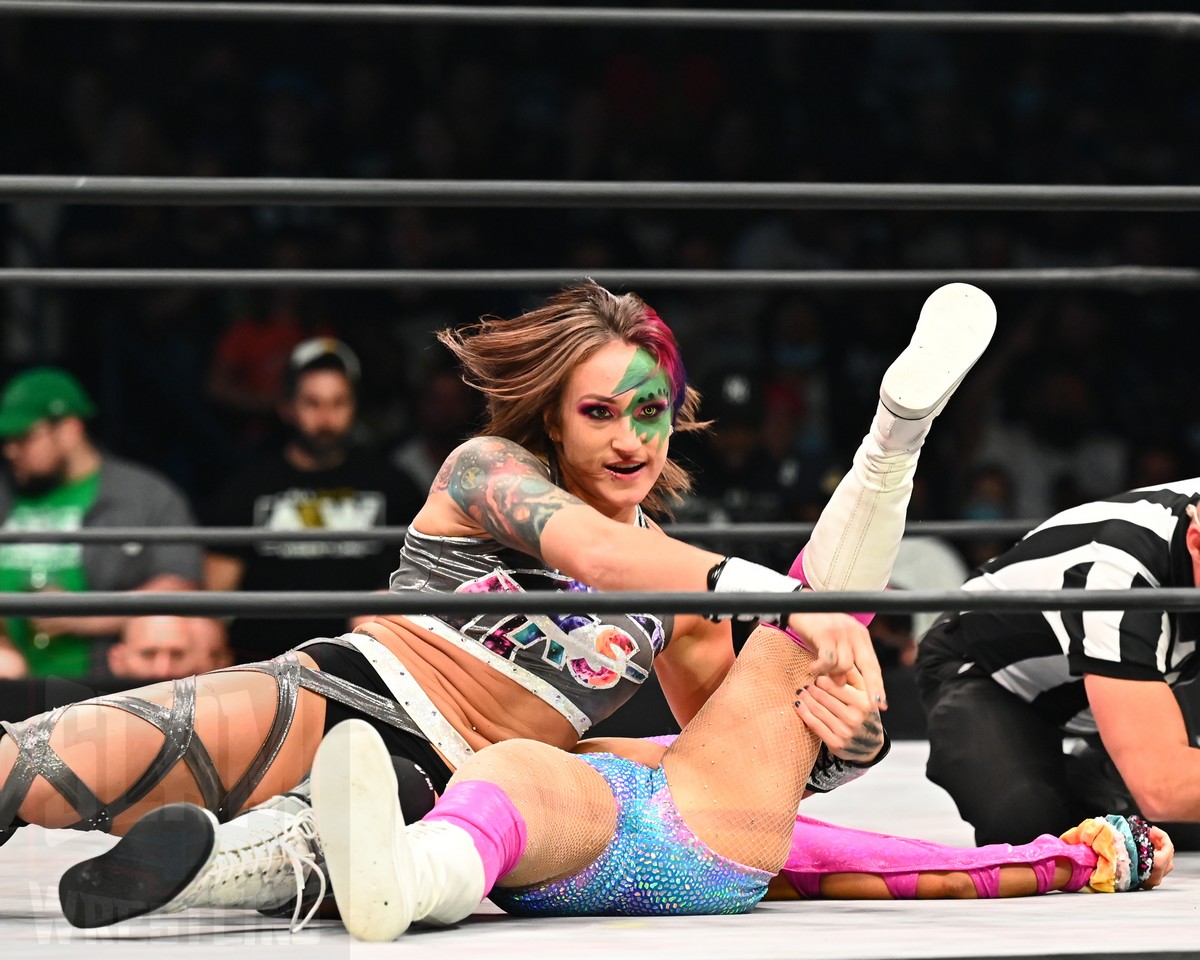 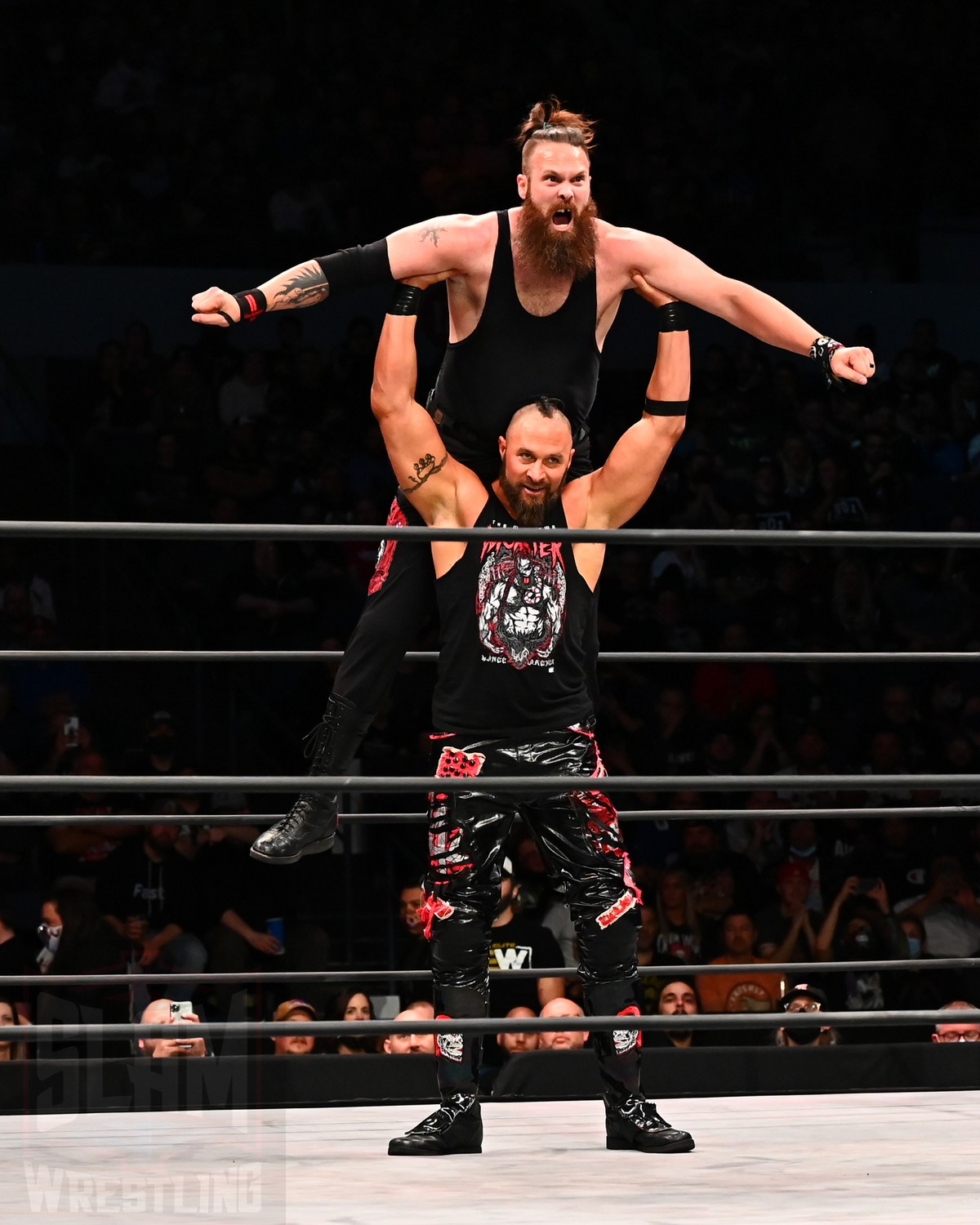 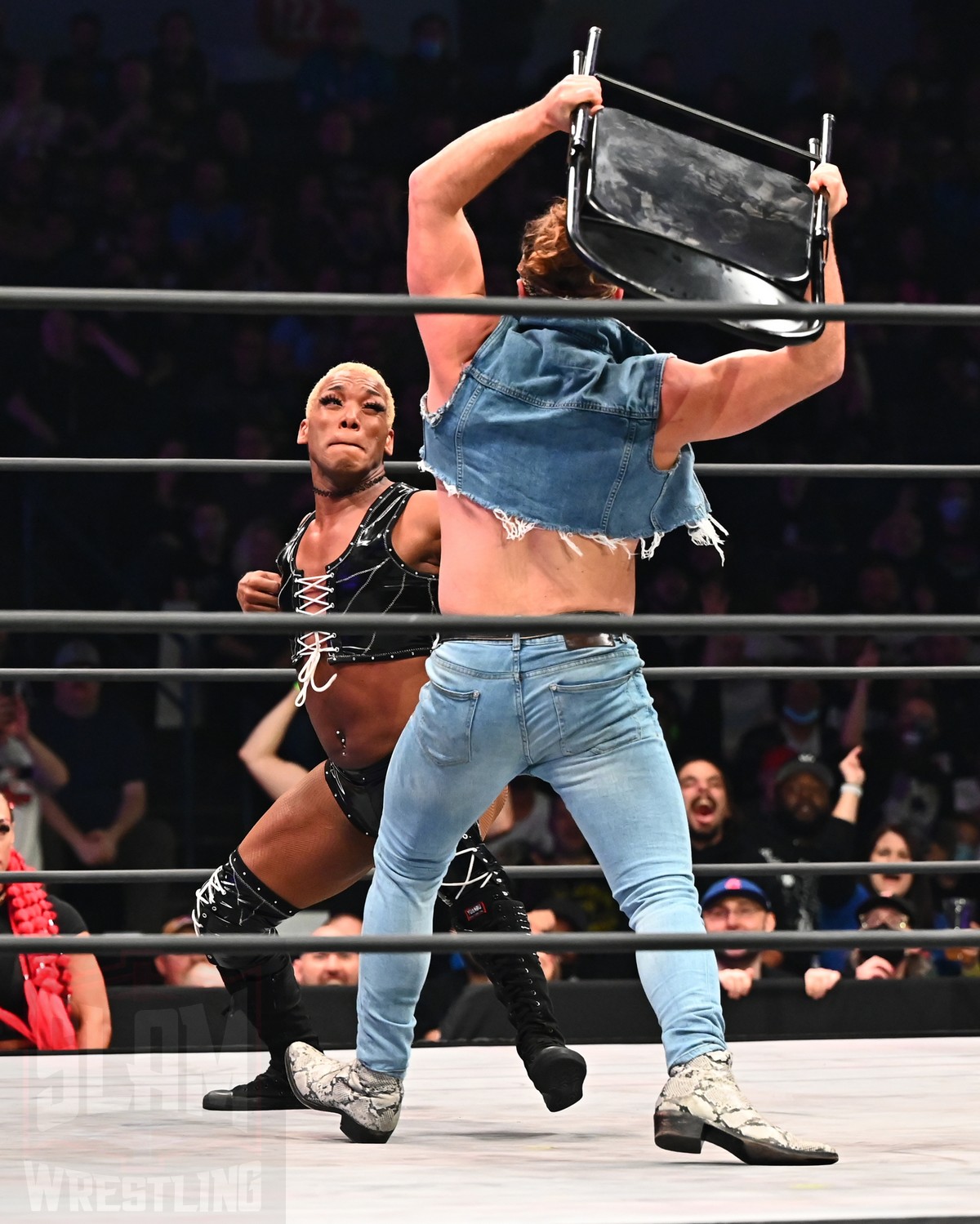