SmackDown: The nightmare before Extreme Rules 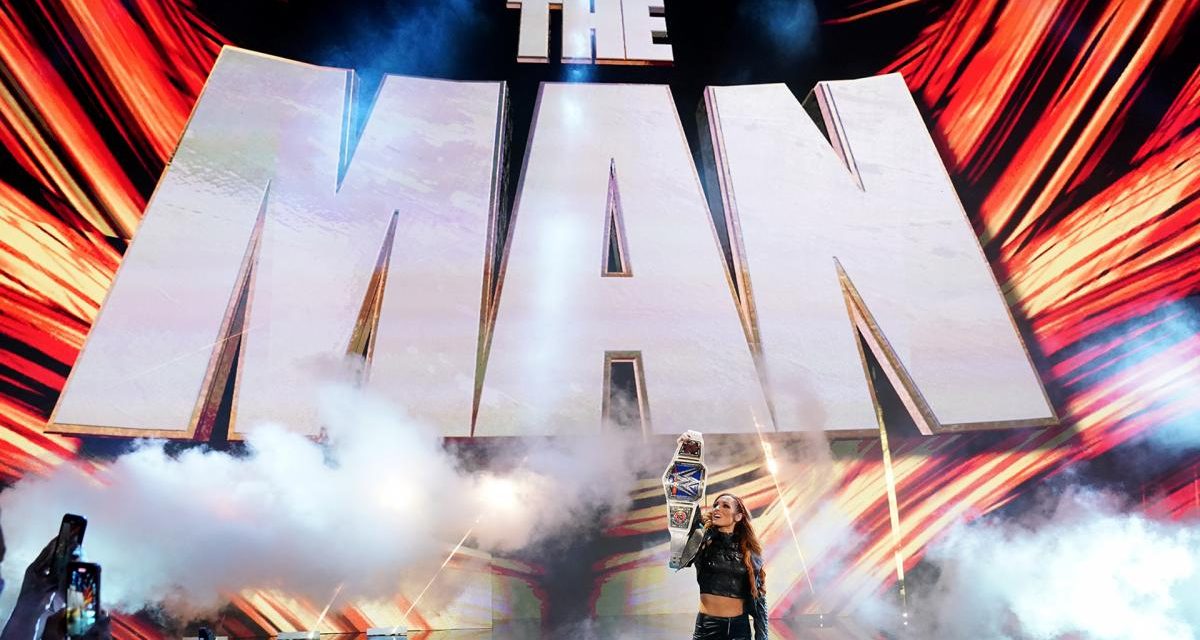 Featuring a championship match, this September 24th episode of SmackDown hosts an in-ring appearance by the Universal Champion!

Becky Lynch comes out to kick off the show, receiving a strangely large positive crowd reaction. The Man grabs a mic, and about half of the cheers turn quickly to boos. She recounts her journey to winning the SmackDown Women’s Title at SummerSlam, and also how she ruined Bianca Belair’s homecoming, but she asks the crowd “what choice did I have?”. She says she won’t have a choice except for victory at Extreme Rules, but Bianca Belair comes out to give her a piece of her mind.

Becky asks her if she’s really the EST, or if it’s just a catchphrase. Belair reminds her she lifted the Man over her head last week in heels. She lists her accomplishments and roasts her in the process, and promises the EST will win at Extreme Rules. Belair offers a handshake, and Lynch slaps her instead. This proves to be a mistake, as Belair goes crazy on her with punches. Lynch tries to grab her for the Manhandle Slam, but Bianca reverses it into the K.O.D., leaving the champ stunned in the ring.

This was a very well done segment. I actually had to rewind the show, because I got so invested in the promo, I forgot to write about it for a second there. I’m very excited for their Extreme Rules match, I have a feeling it’s gonna be good.

The two start off trading strikes, with Nakamura getting the advantage with a kick and Good Vibrations. When the King goes for a knee, Crews dodges and hits a brutal clothesline, before tossing Nakamura clean out of the ring as we go to commercial.

When we come back, Boogs is playing some sick riffs to encourage Nakamura out of a headlock. It works, and the King escapes and hits a series of kicks. Nakamura hits a sliding German suplex for 2. He goes for a flying knee but gets hit with a dropkick from Crews. The former Intercontinental champ tries to out-strike the King, which doesn’t pay off for him, as Nakamura hits an axe kick and a flying knee for 2. Nakamura goes for the Kinshasa, but Crews reserves it into an enziguri followed by a Samoan Drop for 2. 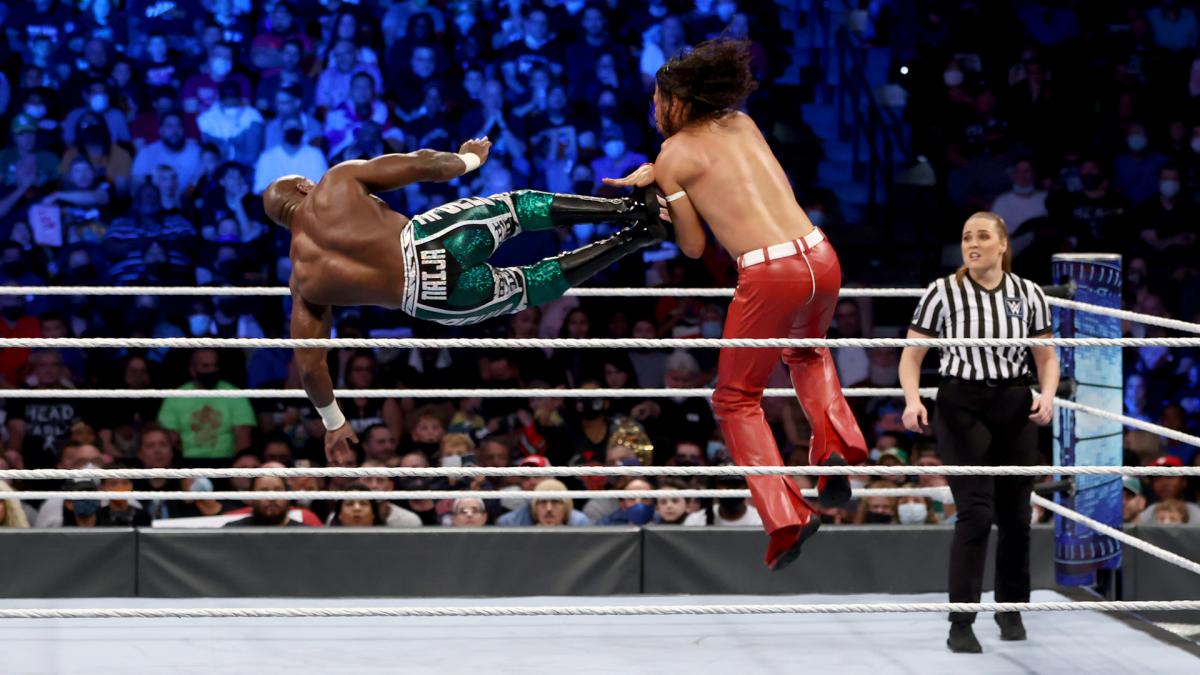 Crews hits a powerbomb and looks for a second one, but Nakamura lands on his feet and hits a back kick. He looks again for the Kinshasa, but Crews rolls to the outside. Nakamura follows him and tries for a kick. But Azeez gets in the way. Boogs grabs Azeez and tosses him with a massive exploder suplex. Nakamura re-enters the ring and reverses an Olympic Slam attempt from Crews into an arm drag before rolling Crews up to get the win and retain his championship.

Kayla Braxton interviews Montez Ford, who is very confident about the Street Profits chances of winning at Extreme Rules. He says that Dawkins is at a wedding tonight, and, he comments on how poorly Roman Reigns is treating the Usos as well.

Roman Reigns sees these comments, and sends Paul Heyman to get him a match with Ford. Heyman finds Adam Pearce and Sonya Deville. He tells them he has a main event for them, and the idea that they don’t have the main event of the show planned until during the show amuses me to no end. They’re like a group of schoolkids scrambling to get their project together on the day of the presentation, but every week.

Seth Rollins comes on to gloat about how Edge hasn’t answered his challenge from last week. He says the sound of Edge’s silence is deafening, and it reveals the truth that Edge is hurt badly, and that the Rated-R Superstar is ashamed that Rollins is the one that did that to him. Rollins tells Edge to show up next week on SmackDown to tell the world that Rollins is better than him and that he ended his career. Rollins says that if Edge doesn’t show up, he’ll find him and beat the truth out of him in front of his wife and kids.

Carmella comes out as well to take part in commentary, and Liv shows her what’s waiting for her at Extreme Rules by hitting Vega with a dropkick and a back elbow right out the gate. She rolls Vega up for 2, but Vega fights back with double knees for 2 before locking in a Dragon Sleeper. Liv gets up and slams Vega into the turnbuckle, but Vega fights back with a clothesline. Liv hits a backbreaker before launching Vega into the turnbuckles, but Carmella distracts Liv, allowing Vega to hit her with a sunset flip powerbomb for the win. 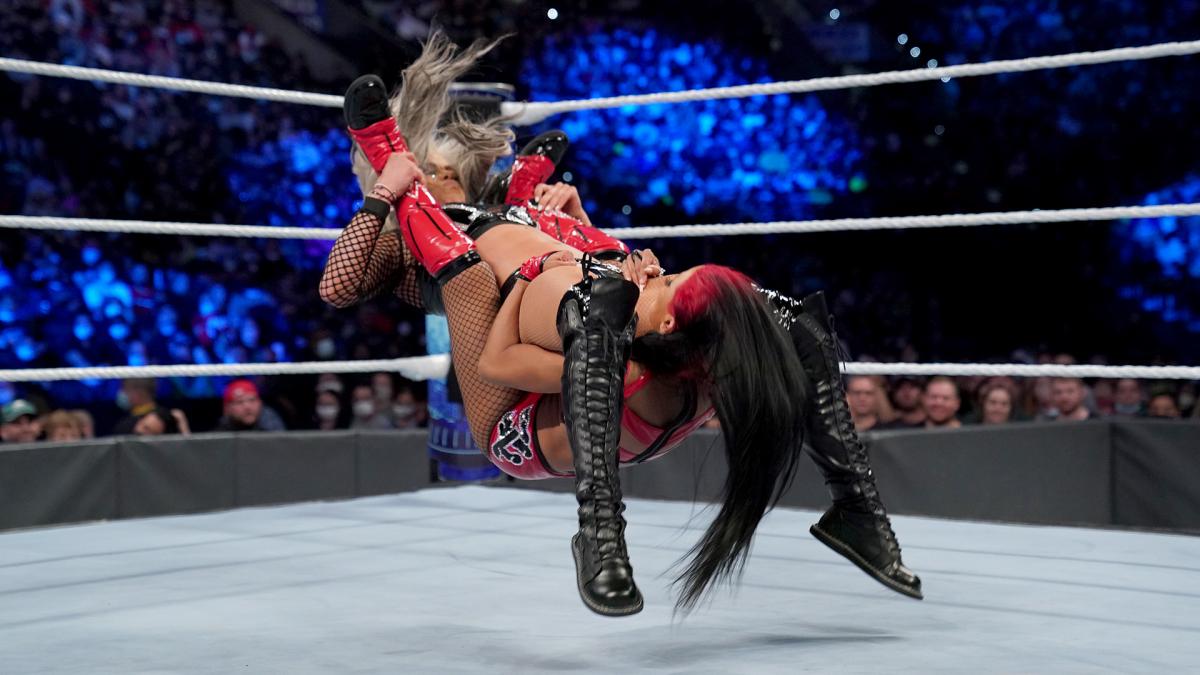 Looking at this picture out of context, I truly have no way of telling you who’s the one delivering the move and who’s the one getting hurt by it. Photo: WWE

Happy Corbin makes his entrance to host his show Happy Talk. He says that this show is about happiness, unlike the K.O. Show, which is about bringing people out and making them sad. He says for his first guest, he needed to pick someone that embodies happiness. His first guest? Himself! He talks about all his material possessions that make him happy, and he shows him the footage of him from last week beating up Kevin Owens, which also makes him happy. Owens comes out to confront him, but before he can get to the ring, Riddick Moss jumps him from behind. He and Corbin beat down Owens, slamming him into the steel steps and having a laugh about it.

Nikki starts off by running circles around Natalya and hitting a couple of dropkicks for 1. Natalya slams Nikki to the mat before running her into the turnbuckles and stomping her down. Nikki tries to fight back, but Natalya continues to beat her down in the corner. Nikki looks for a Tornado DDT, but Natalya reverses it into a pin. Nikki is able to reverse it and get the win. 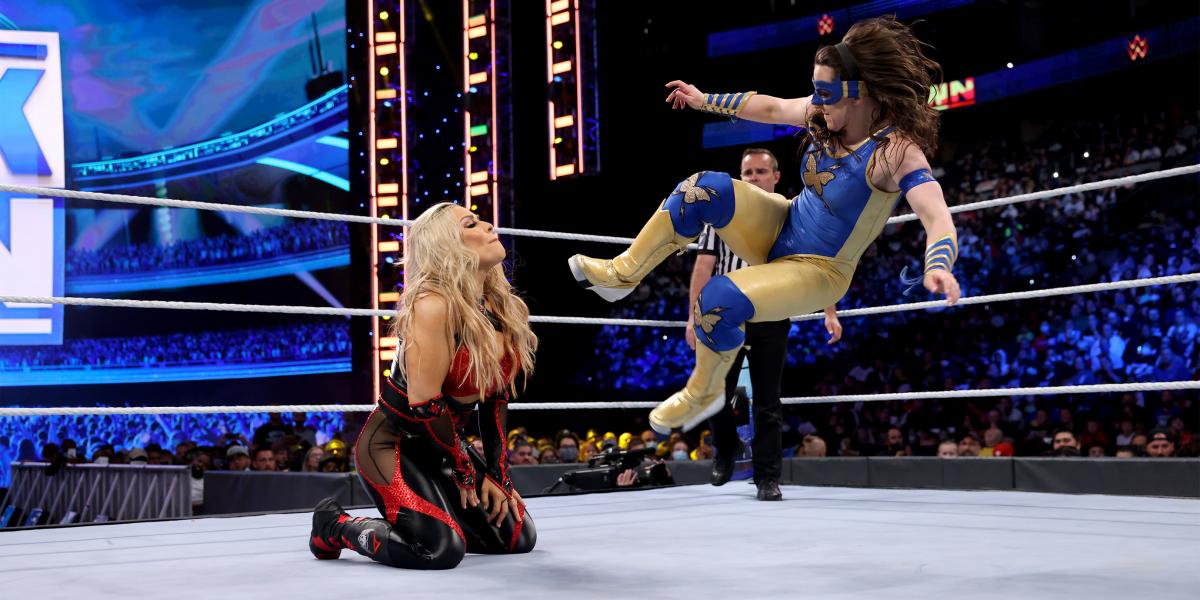 After the match, Shotzi and Nox come out in their tank and take a shot at the tag champs, effectively issuing their challenge.

Dominik Mysterio tells his dad Rey that he nitpicks his matches too much. He says he would’ve won against Sami if Rey wasn’t there. Rey walks away in a huff. Sami comes up and compliments him a ton, and he even goes so far as to say that Dominik should listen to Rey less and start trusting his own gut a little more.

Naomi comes out to call out someone to a match, but Sonya Deville comes out to tell her she’s not gonna get one. Naomi challenges her to a match right now, and she gets audio tech to cut her mic, but not before she gets the crowd chanting “make the match.” She also gets security to escort Naomi out of the ring.

Ford grabs a headlock, which Reigns quickly reverses into his own. Ford escapes, but Roman plows through him with a shoulder tackle. Ford fights back with a couple of dropkicks, causing Roman to go to commercial.

When we come back, Roman is in control, choking Ford against the ropes. The Universal Champ crushes Ford in the corner with 10 clotheslines, but when he goes for one more, Ford hits a kick, a bunch of chops, and an enziguri. Ford clotheslines Roman to the outside and follows him out, slamming him into the barricade and hitting him with a flying clothesline of the steps (after trying to jump off the announce table and having it crumbling it under his feet), but when they get back into the ring, Roman tosses Ford high into the air and he crashes hard. The Tribal Chief follows it up with a clothesline as we go to commercial.

When we come back Roman is still dismantling Ford, choking him on the ropes once more. Ford fights back with an enziguri and a springboard splash for 2, followed by a standing blockbuster for another 2. Ford looks for a Frog Splash, but Roman avoids it and hits a uranage. The Universal Champ calls for the Superman Punch, but Ford reverses it into a DDT for a very close 2. Roman rocks the jaw of Ford with an uppercut, but Ford slams Roman into the ringpost before hitting a running apron kick and slamming Roman into the steel steps. He rolls Roman back into the ring and tries the Frog Splash, but Roman gets his knees up and locks in the Guillotine Choke, forcing Ford to tap. 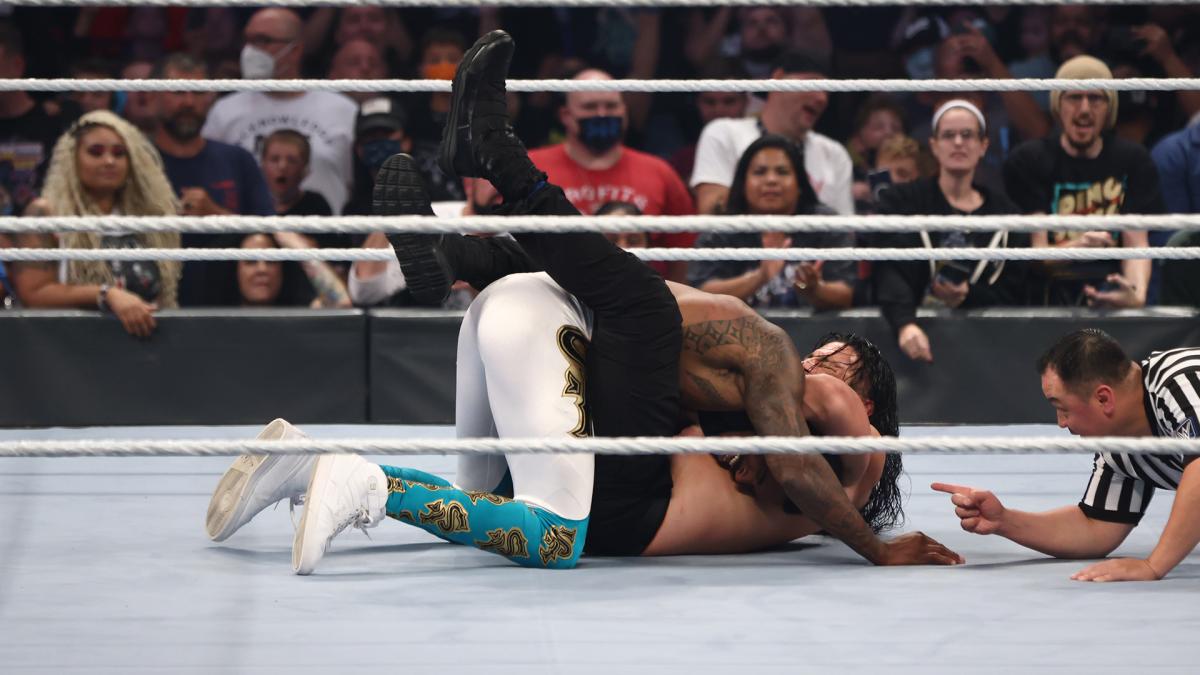 A lot of uninterested faces in the crowd. Photo: WWE

After the match, Heyman tells Roman to show everyone that he can go Extreme, using Ford as an example. The Usos come out and set up a table, and Roman beats for with a chair before slamming him with a uranage through the table. Unfortunately for the Bloodline, the Demon appears on the top rope above them. He jumps down onto them before grabbing a kendo stick and beating them down. He continues the assault with a chair onto Roman’s back, before shoving Roman to the outside and jumping onto him with a Swanton.

Absolutely great SmackDown. Exciting matches, engaging promos, a proper amount of women’s division content, and a very impressive singles showing from Montez Ford. Really good show, but, and I know I’ve probably said this before, and I’ll most likely say it again: why can’t every show be like this?