SmackDown: Balor finally gets his chance 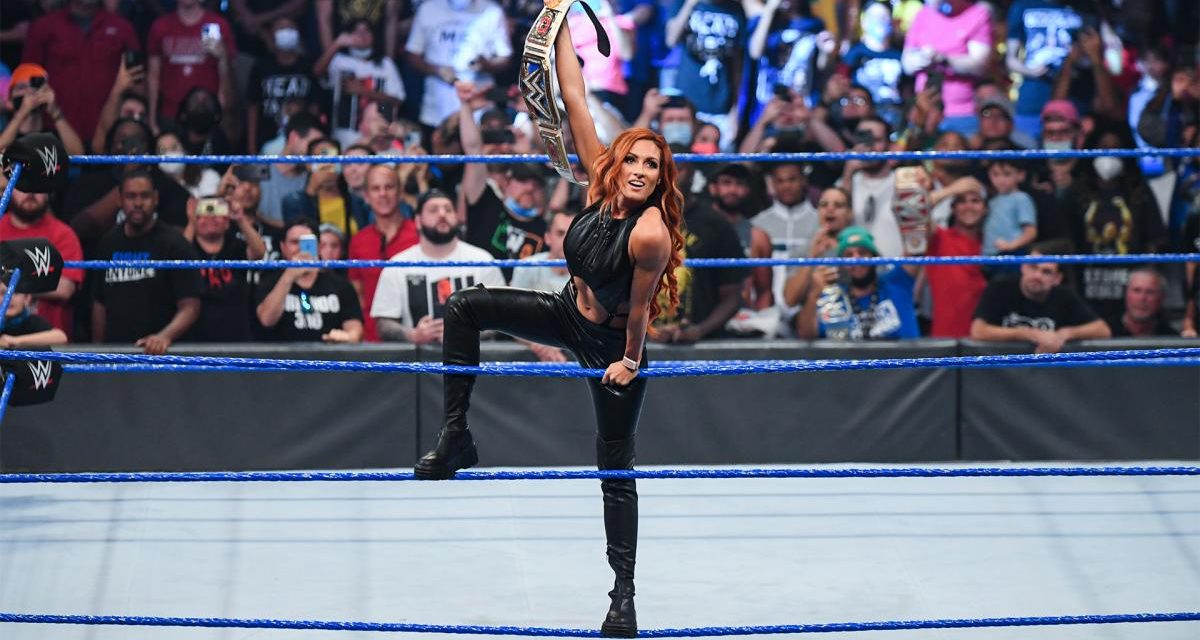 Corey Graves is in for Pat McAfee and I’m immediately 50% less interested in the broadcast. The first words out of Graves’ mouth are that he couldn’t have picked a “bigger, more better night” to be on the show.

Jimmy and Jey show off their new Bloodline t-shirts and deliver a very confident promo before The Profits enter with mics to talk a little trash, too.

Jimmy and Dawkins start off, with Uso taking far too long celebrating for the crowd after dropping Dawkins with a shoulderblock. Angelo responds with a high dropkick and spinning clothesline before Ford tags in for an elevated dropkick of his own. He attempts to cross-body both Usos on the floor, but they catch him and spin him into the barricade before the commercial.

Back from the break, Ford has been taking the brunt of the assault but he dramatically leaps to tag in his partner, although Dawkins’ hot-entry is cut short by Jey and a Samoan Drop. A kick to the head by Jimmy sends Dawkins tumbling back into his own corner for an accidental tag, and he bounces out to plant Jimmy down for a rotating top-rope splash by Ford. 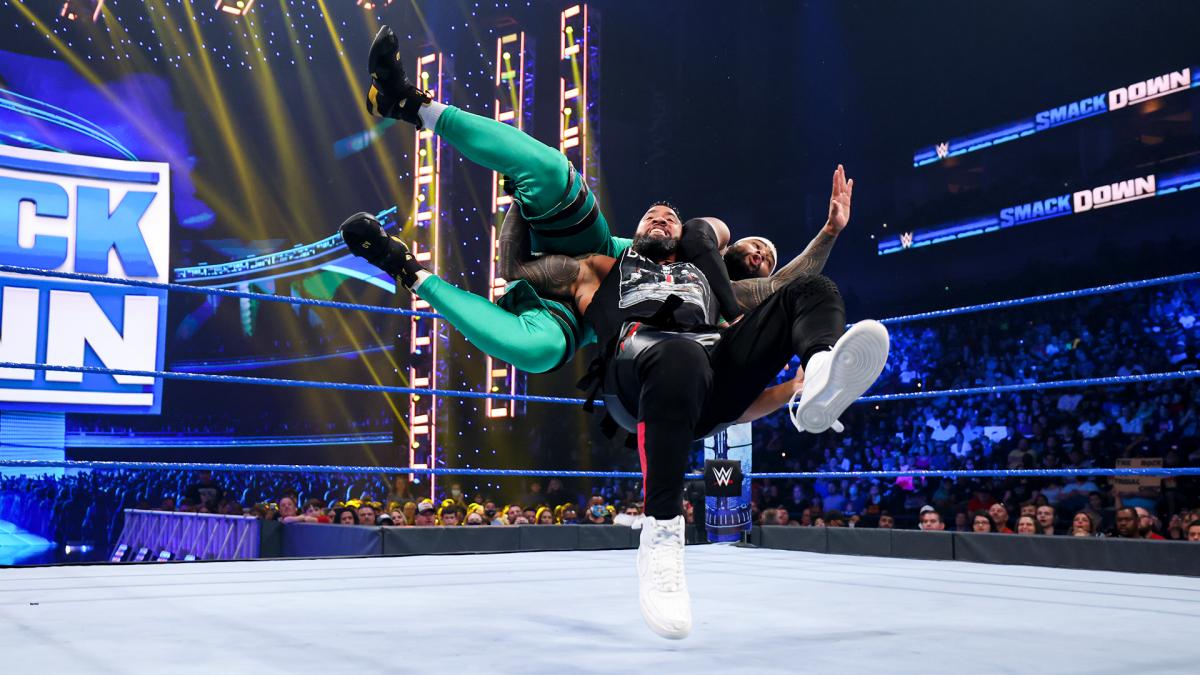 Jey breaks up the pin and remains in the ring to run Ford into a couple of the ringposts. The ref decides to follow the rule book and calls for the bell with Jey staying in the ring for too long, because the rules are convenient to have around when you need them for something.

Winners via disqualification: The Street Profits

The Usos beat Dawkins around on the floor before Ford nearly screws himself into the ground by leaping over the top rope and crashing headfirst into the tag champs. Backstage, Reigns looks unimpressed, perhaps because he’s figured out the fact that this was a win for the Profits, so technically they should get a title shot now.

Heyman is sent to bring the Usos to Reigns when he is startled by Kayla Braxton. He’s telling her that she should just be enjoying her time backstage instead of, working, I guess, is what he’s saying? As he’s speaking, Brock Lesnar’s music hits — from Heyman’s phone. He mutes the call. It rings again. Apparently failing to grasp that he is quite capable of walking away to take the call, he tries to answer it as secretly as possible while just standing there. He is apparently asked to deliver some kind of message.

As he walks away, he bumps right into a custodian, but it’s really Big E, and he holds up his Money in the Bank briefcase, laughing like a madman.

Speaking of a Man that made people mad, Becky Lynch makes her entrance to the ring. Well, this crowd is pretty pro-Becky, but there are more than a handful of people booing. It gets awkward when she starts her promo by complaining about not getting a “You deserve it” chant when she appeared on SmackDown last week. A weak chant starts up and a big grin spreads across her face.

She brings up her SummerSlam match and laments that she’s being portrayed as the bad guy for winning the match too quickly, and calls out Belair for not being ready for the match, in a slightly heel-ish promo by the champ.

Belair comes out to a much more uniformly positive reception, and also delivers much more of a babyface speech, refusing to play any excuses for the loss. She tries to goad Lynch into a match, asking why she can’t put up the title like Reigns is doing later on. Lynch responds with a simple no, drops the mic, and walks out.

Backstage, Dolph Ziggler is being a little flirtatious with Toni Storm, until she lets him know that she’s rooting for Rick Boogs in his match against DZ. Awkward.

Boogs tries to use amateur wrestling techniques on Ziggler, which doesn’t end well for him. Ziggler locks in a sleeper, but Boogs powers him into a press slam. He looks for his pump handle powerslam, but Ziggler gets out and hits a jumping DDT for a close 2. The Show-Off looks for a superkick, but Boogs reverses it into a pumphandle powerslam to get the win. Corey Graves dubs the pumphandle slam the Boogs Cruise.

Sonya Deville and Adam Pearce approach and inform Becky Lynch that she’ll be facing Bianca Belair at Extreme Rules, and they’ll be signing the contract next week on SmackDown.

Rollins says that he’s used information gathered from watching Edge’s SummerSlam match with him to create the perfect game plan. To start off the match, Cesaro grabs Seth with a massive backbreaker. Seth goes to the outside, and Cesaro follows him there, hitting him with an uppercut. He brings Seth back in, but Seth fights back with a dropkick. Seth continues the assault with a chop, but Cesaro answers with his own dropkick. The Swiss Cyborg looks for the Swing, but Seth gets to the ropes. He tries for an enziguri, but Cesaro dodges and hits an uppercut. 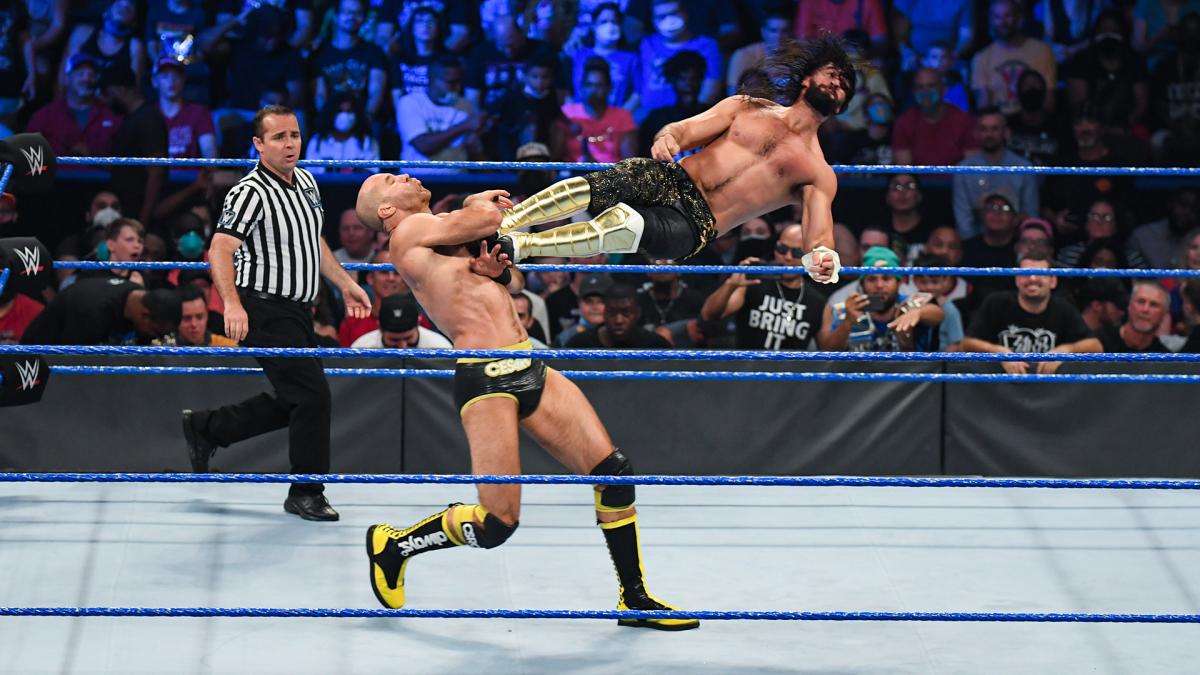 Seth surprises Cesaro with a kick and an Impaler DDT for 2 as we go to commercial. When we come back, Seth is climbing to the top rope, but Cesaro catches him with a stiff uppercut. Cesaro climbs to the top and looks for a superplex, but Rollins turns it into a buckle bomb for 2.

Cesaro hits an uppercut, but when he goes for another, Rollins reverses it into the Edge-O-Matic. Rollins looks for the Stomp, but Cesaro catches him and sends him crashing to the mat with a powerbomb. The Swiss Cyborg rallies with some fast, hard uppercuts and a discus clothesline, which gets a 2 count and a “Yeah, yeah, yeah” out of Corey Graves.

Cesaro sends Rollins swinging and then locks in the Sharpshooter, but Rollins is able to make it to the ropes. Cesaro tosses Rollins to the outside and looks for a running uppercut, but Rollins grabs a steel chair and slams it into Cesaro, earning himself a disqualification. He slams the Swiss Cyborg into the ringpost for good measure, before grabbing a chair, kicking a bar off of it and using it in a crossface maneuver a la Edge. He asks Edge where he is before hitting Cesaro with a Stomp. As the final exclamation mark, Seth tries for the Con-Chair-To, but Edge comes out with a chair of his own and stops him.

Roman Reigns converses with the Usos, telling them to run their game plan. Paul Heyman comes in and says that they have a problem: Brock Lesnar is going to be at SmackDown next week. Reigns wonders if Brock could already be here tonight.

Edge tells Kayla Braxton that he had hoped that Seth would have moved on from him by now, but he understands his reasons behind it. Edge says if he lost the way Seth did at SummerSlam, he’d be mad too. He challenges Seth to another match at Madison Square Garden next week on SmackDown.

Baron Corbin arrives in style in a car that’s too expensive for me to know the name of before giving his keys to an interviewer and walking to his interview with Kevin Owens on the K.O. Show. Sorry, sorry, he’s “Happy” Corbin now. I refuse to call him that. Corbin has a slot machine based theme song and Titantron video, and I have to say, he is truly happy. I still refuse to call him Happy. Corbin thanks Owens for helping him get out of his slump, and he invites his special guest, Logan Paul, who gets nothing but boos from the WWE crowd.

And I mean seriously, he is almost drowned out by them. Owens says that in this ring is one of the most egotistical pieces of trash to ever step foot into a WWE ring, and Baron Corbin is here also. Paul says he shouldn’t talk that way to him and hands him 100$, saying K.O. needs it more than he does based off his clothing choice.

Owens says he doesn’t need his money, all he needs is for Paul to leave WWE forever. Paul and Owens shove each other around, and they seem about to fight, but Corbin interferes and gives Owens a chokeslam. Paul drops 100$ Owens and tells him that he’s “not that guy.”

Dominik begins the match by surprisingly out wrestling Sami, but Sami gets control with an armbar. Dominik delivers an arm drag, but Sami fights back with a clothesline. Dominik sets Sami up for the 619, but Sami runs to the outside. He tries to leave the match, but Rey comes out and shouts at Sami to get back to the ring. Dominik dives outside onto Sami, and his dad cheers him on. Dominik sends Sami back into the ring and tells his dad he’s got this, but when he gets back into the ring, he immediately eats a Helluva Kick from Sami, getting the Great Liberator the win. 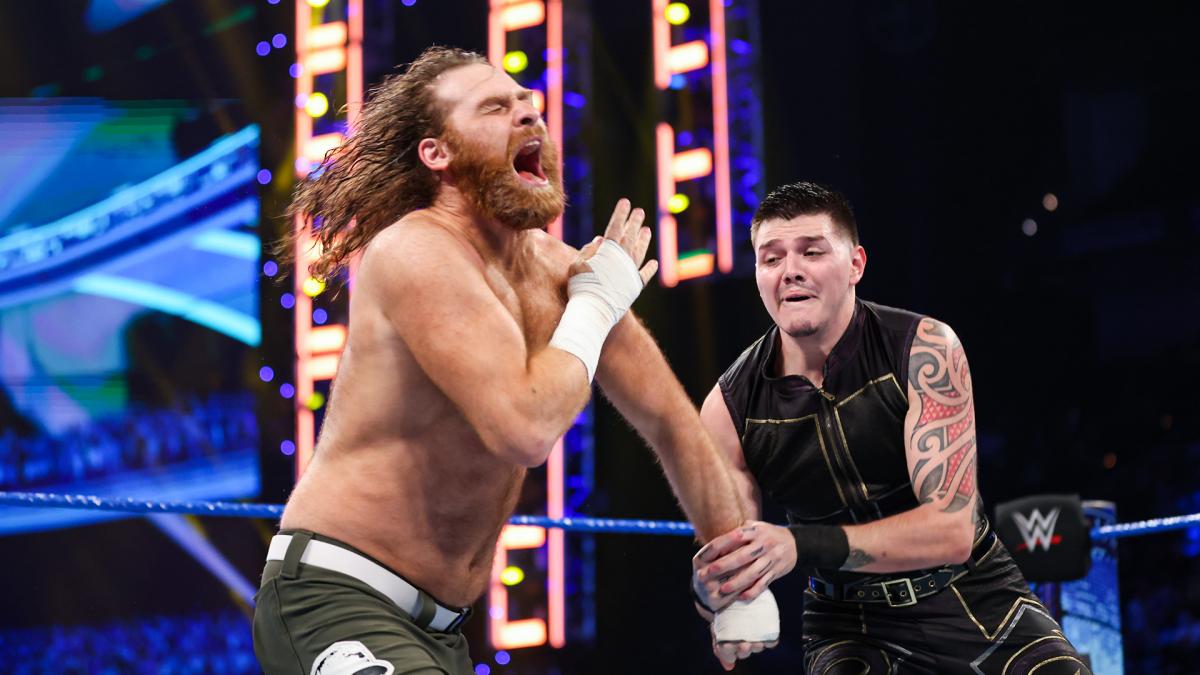 There are no non-intense facial expressions in this photo. Photo: WWE

Naomi asks Sonya Deville, in mid-phone conversation, about the match she asked for last week, but it apparently slipped Deville’s mind. She tells Naomi to ask her again next week and returns to her phone call.

This is it. Finn Balor finally, after all these years, getting his Universal Championship title shot- aaaand the Usos attack him before the match. They slam the steel steps into him a couple times before The Street Profits come in and chase the Usos away. Medical crew check on Finn Balor while Roman makes his entrance, and Finn is cleared to wrestle.

Reigns stars the match off with a massive Biel throw before planting his boots on Finn in the corner. He delivers a ton of clotheslines to Balor, but the Prince fights back with a basement dropkick. He continues the assault on the left leg of Reigns before hitting a slingblade. He looks for a shotgun dropkick, but Reigns delivers an uppercut followed by an enziguri for 2 as we go to commercial.

When we come back, Roman is looking for a Superman Punch, but Balor fights back with a chop. Reigns hits an uppercut and Balor hits the Pele Kick, and they both go down. Balor gets back up first and starts raining down blows on the Universal Champion. Reigns goes back to the injured midsection of Balor, but the Prince returns fire with a takedown and a double stomp. Reigns tosses Balor to the outside. 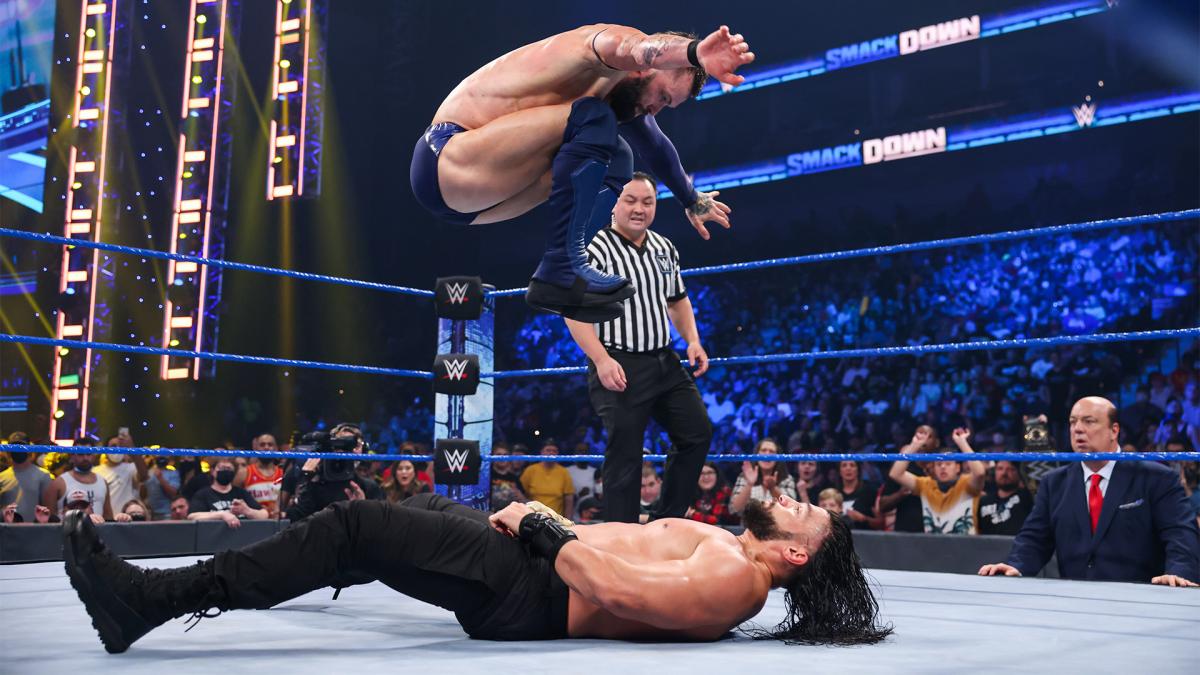 Finn Balor is an incredibly graceful, accurate, athletic wrestler, and he deserves better than being attacked before the match that he’s been owed for 5 years. Photo: WWE

Reigns looks to follow him out there, but Balor traps him in the apron cover and stomps him down. Balor dives onto Reigns on the outside and then looks for the Coup de Grace back in the ring, but Reigns avoids it and hits the Superman Punch for a close 2. The Tribal Chief signals for the Spear, but Balor reverses it into a rollup for 2, followed by an elbow drop for another 2.

Balor delivers the Shotgun Dropkick and hits the Coup de Grace, but Reigns kicks out, hitting a low blow as he kicks out, which I’m sure was unintentional. Reigns rains forearms down on his challenger before locking in the Guillotine Choke, putting Balor to sleep.

Rick Boogs match? Fun. Cesaro VS Seth Rollins? Truly enjoyable match. But this show gets a 2 because I cannot and will not accept Finn Balor not being taken seriously.