Punk and Allin come face to face on Rampage 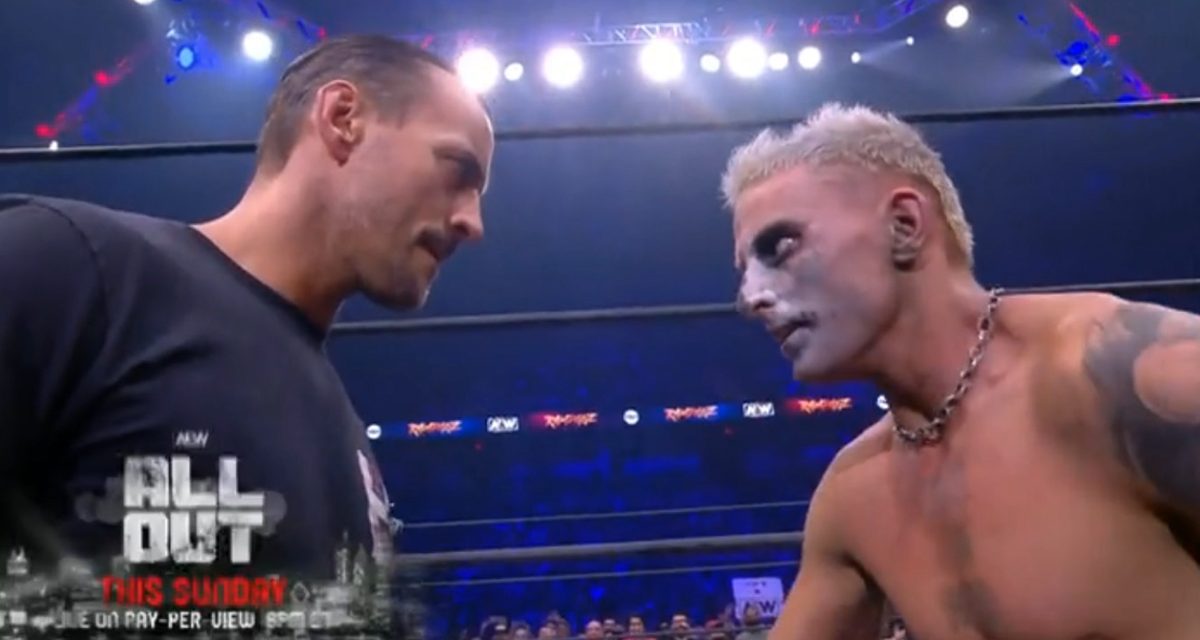 Sometimes the best laid plans of mice and men do go awry. 2point0 and “Red Death” Daniel Garcia talked a big game on the last episode of Dynamite but they couldn’t follow through on their promise to maim, destroy and derail the All Out main event between Darby Allin and the returning CM Punk.

Garcia took on Allin in the Rampage main event but they weren’t alone. There were plenty of guests around the ring. Punk was on commentary. 2point0 was at ringside and so was Sting. Yeah, it was mighty crowded out there.

Allin and Garcia started out just slapping each other senseless. The fight spilled to the floor where Allin uncharacteristically missed a dive and put himself through a table. How embarrassing.

2point0 tried to stick their noses in. Sting was there to deal out some justice keeping them out of the match. Garcia whipped Allin into the steel steps gloating over his handiwork. Garcia escaped an arm lock submission by rolling out of the ring and once again we are on the floor. Allin smashed Garcia’s arm into the steps and then stomped on it.

Garcia pulled off a light bulb moment by using the chain Allin wears around his neck against him by placing it in his own mouth and viciously yanking on it. Yeah, I still feel sorry for Greg Valentine when Piper did that. Poor dude.

A superplex by the impressive Garcia gets him a two count. Allin uses a Coffin Drop of sorts to get out of a rear naked choke. CM Punk is delighted on commentary when Allin drops Garcia with a Pepsi Twist.

Allin wins with a Code Red and an innovative roll-up. Sting and Allin are swarmed by 2point0 and Garcia.

CM Punk has seen enough. He stomps on down to the ring. 2point0 jaw jack with him on the floor so that Allin can dive on them. Allin and Punk stare each other down while 2point0 lay on the floor counting ceiling tiles.

Black gets ready to kick Johnson’s head off his shoulders as he bounces off the ropes. Johnson holds onto them for his life. The commentators wonder what blood type Johnson has and if they will find out tonight. Jericho wonders if it is…”Type-O-Negative”.

And, you guessed it. Time for this week’s musical interlude. Here is Type-O-Negative’s cover of Neil Young and Crazy Horse’s Cinnamon Girl. Enjoy!

Back to the action…

Chris Jericho thinks Black “needs an exorcism”. Johnson battles back with some forearms, elbow strikes and a drop kick. He dives on the floor taking down Black. He frog splashes Black. He doesn’t cover the man. Yes, a “rookie mistake”. A running kick to the Johnson’s head by Black has Jericho saying: “His head just sailed to the 15th row into the lap of some fat kid.”

Johnson is dazed after a barrage in a corner. Black leaves the ring. He returns with a steel chair. The official warns him not to use it. Black lays the chair on the mat turning his back on Johnson. The announcers tell us that Black is trying to “corrupt” Johnson. Johnson picks up the chair and has an attack of conscience. Black kicks him for the three count. Black stands in victory with his foot on Johnson’s face. Dustin Rhodes runs down to the ring picking up the chair. Black hits the Rhodes…I mean road.

A pissed off Dustin Rhodes speaks his mind backstage. He challenges Black to a match on Dynamite. “I am coming straight for you! You WILL see me coming! I know you are from a place of darkness but guess what? I have thrived in darkness for five decades! There is nothing you can do to me that I haven’t already been through!” Well, he worked for WWE. He might have a point there about a “place of darkness”. Scary. 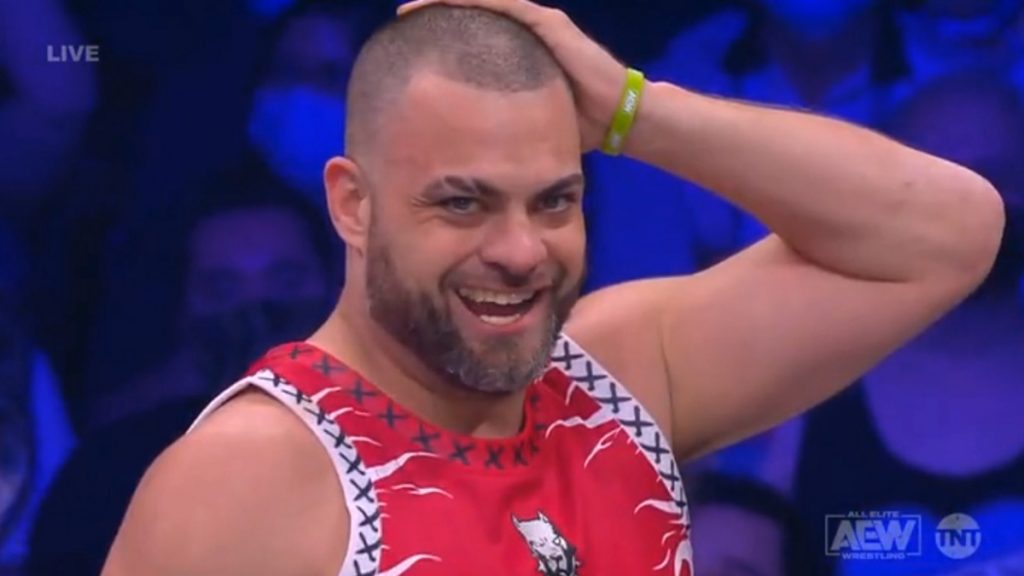 Miro spouts off in the ring. He claims his god is mad at the ‘Mad King’. “You took a charity contract with AEW,” Miro says mocking Kingston. “In life without struggle you become soft,” he continues. Kingston appears. Kingston isn’t sure if Miro’s god is real or not but if he is, he has sent Kingston to punish Miro for his sins. Kingston charges the ring. Miro ducks out. The fans boo. Kingston comes running around the ring. Miro nails him with the TNT Championship in the head rolling him back in the ring. Miro puts the title on Kingston’s throat with the intension of stomping on it. Kingston rolls out of the way and DDTs Miro. Miro is out cold. Kingston grins ear to ear. 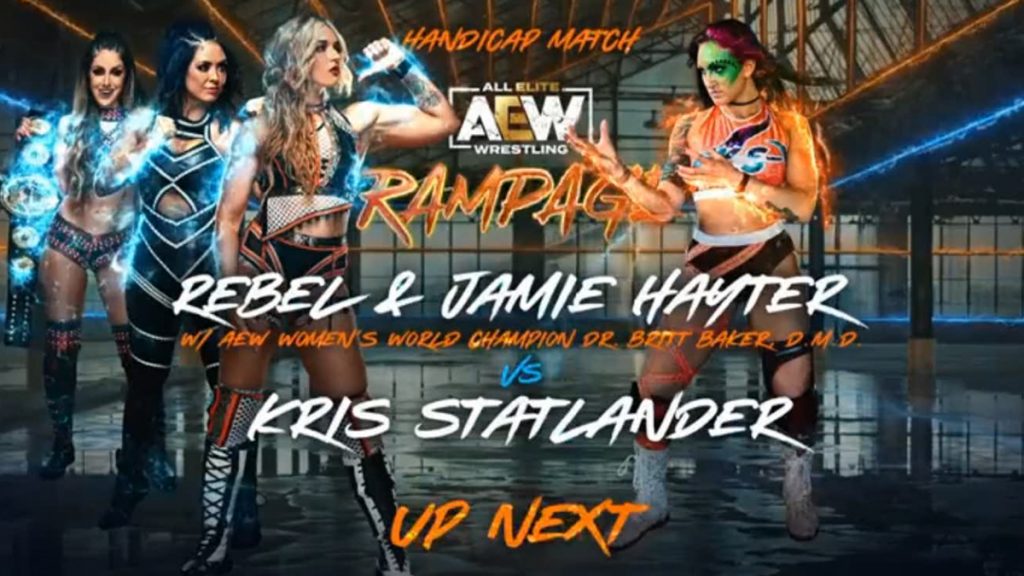 Rebel manages to suplex Statlander, well, sort of.  Statlander has Rebel on her shoulders and catches Hayter in the air. She holds them both and slams them both. Wow! Hayter bails out of the ring and the match. Statlander pins Rebel. Rebel, Hayter and Britt Baker surround the ring. Red Velvet arrives on the scene causing the heels to bail.

The show served its purpose. It hyped this weekend’s All Out event and lit a fire under some of the angles. The matches though were fine, solid but not of the caliber seen on Rampage in the past few weeks. Nothing really stood out as anything quite remarkable.