MKW returns with a Blast-off 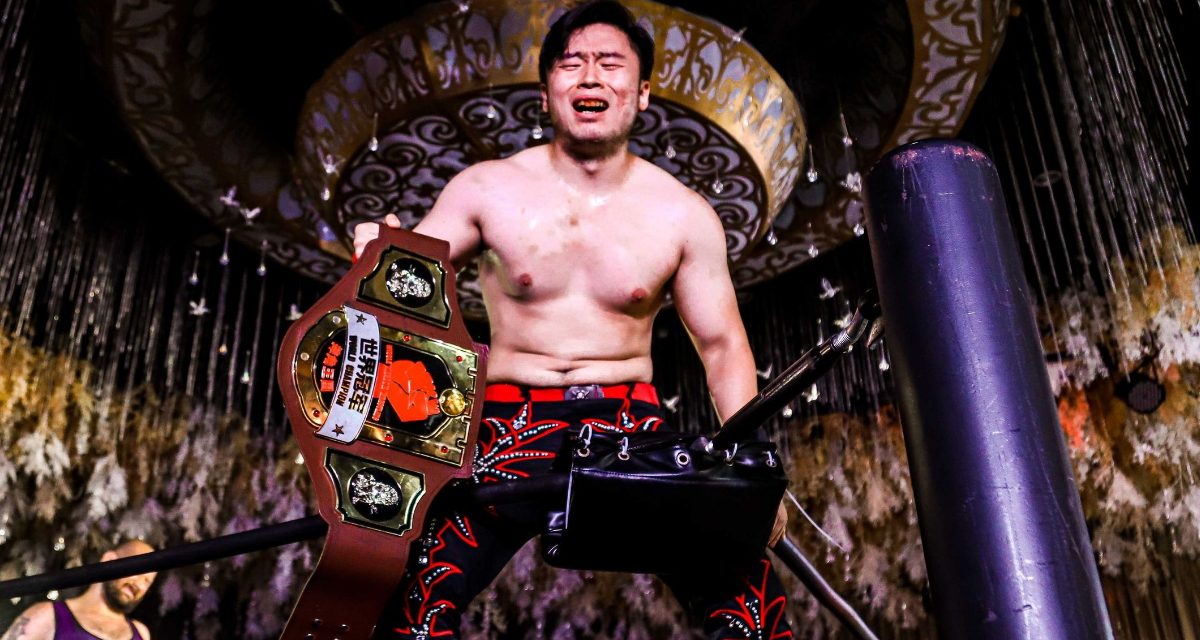 Middle Kingdom Wrestling (MKW) continues to lead the way in Chinese professional wrestling as the foremost promotion that blends American style pro wrestling with Chinese tradition. The second season of episodes have ended, but before starting the next season, MLW presented Blast-off LIVE, a landmark special. It felt like everything came to a head in the 90-minute special presentation, the first time since the COVID pandemic started that the wrestlers are competing once again for a live audience.

Aegon’s gear has changed from prison orange to street clothes as he is now apparently a free man.

Kid and Aegon start. Kid outsmarts him with comedic techniques then Cui and Poseidon enter. Poseidon’s high flying overcomes Cui’s power bringing the stoutest members in Saga and Plata. They show equal aptitude in power until a shotgun dropkick from Plata changes the momentum. But Aegon immediately turns things around once the Kid comes in. All 3 take turns picking apart Kid. 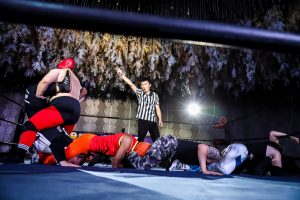 Mascara Plata Boston crabs the rest of the wrestlers in the match who engage in a multi-man figure four head scissors chain.

Kid turns things around by causing a triple team attempt to become a DDT by SAGA on both his own partners. Plata comes in fired up and soon enough chaos breaks with subsequent consecutive interference by all team members. After all men are left laying a Boston crab by Plata puts all the other men in trouble then he and his two teammates take to the top rope for a splash finish on all three respective opponents.

The abuse of domineering Steve on his student Tao comes to a head here both men have something to prove.

Tao jumps Steve as he removes his entrance shirt, punching and kicking Steve to the floor where he continues the beating. Wily Steve turns things around with help from the apron and post and continues the assault inside. Unprecedented aggression from both men here. 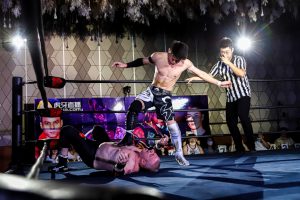 Michinoku driver gets Steve two and he continues the assault with bigger and bigger power moves until Tao turns things around with corner shoulders and a DDT.

Steve rakes an eye to escape a chinlock and walks away from the match ending the match in a count out.

PK Mode dominates early on overcoming the power and tricks of the Whips with tag team fundamentals. The Whips take control with a sneaky strategy on the outside that has Crusher get posted then stomped with an assist. 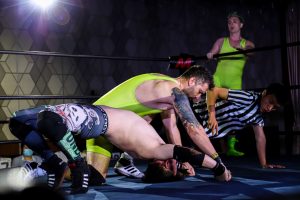 Mad Dog Connor over powers Bamboo Crusher in a test of strength.

The Whips show tag team expertise of their own in isolating Crusher while humiliating him to boot. He makes the tag to Mamba after tripping up Holmes in various ways from the prone position on the mat.

Mamba’s comeback gets cut shot by impressive double teams which get a near fall for the Whips. After PK Mode returns the favour, a sneaky pin out of nowhere by Holmes on Crusher scores the win. 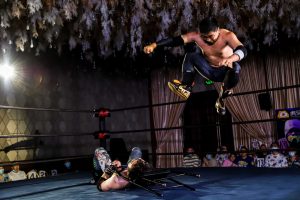 Black Mamba unleashes his frustration onto his partner Bamboo Crusher after folding a chair around his head.

Post-match Mamba jumps Crusher in anger and then continues the attack with a kendo stick and then a chair that he stomps after folding it around Crusher’s neck.

Hong Wan is fired up and shows off his power early on at an abrupt pace. Ash ends up slowing things down to his familiar methodical pace once he turns things around on the rusty fan favourite.

After a comeback that culminated in Wan’s standing moonsault and setup for the reverse DDT Queen Marie jumps up on the apron for the distraction as Ash uses the belt to hit Wan in the head and then frog splashes him from the top for the three.

This long rivalry culminates with all men feely being able to fight at once.

The Stable’s power proves effective off the bat as Money dispatches Buffa off the bat with his spear and he and Sam concentrate on Chen.

Buffa reemerges, saving Chen as the Stable sets up a double team powerbomb.

C2NY then concentrate on first Sam then Money with impressive double team attacks.

From the outside Sam nullifies Chen and joins Money in the ring on Buffa. 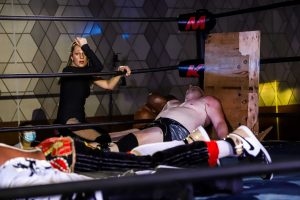 Queen Marie shows concern as Big Sam has just been driven through the board by Stable-mate Uncle Money.

As things continue Chen brings a board/door into the equation in ring. The Stable try to take control of it but Money ends up spearing Sam into it. C2NY both cover Money for the three.

Ray gets on the mic before Dragon enters and says when Dragon zombified Johnny it made things too personal and that’s why the unprecedented situation exists here.

Zombie Dragon successfully defends against Johnny to start but Ray evens the odds quickly. Zombie sends Ray to the outside onto Johnny but is unable to capitalize.

Johnny produces a mallet from under the ring and misses an attempt in striking Dragon with it. Zombie shrugs off an attack with a glass bottle that shatters on his head from Ray. Zombie goes on a rampage attempting to use the MKW backdrop as a weapon in the ring but Johnny stops him with a boot. Johnny attempts a top rope move onto Zombie as he lays on the set piece but Zombie is able to stop him and powerbomb the big man onto the item for a very close near fall.

Zombie stops an aerial attempt from Ray with a dropkick for another two. Johnny stops him from continuing the punishment and finally hits the mallet shot on Zombie’s head. 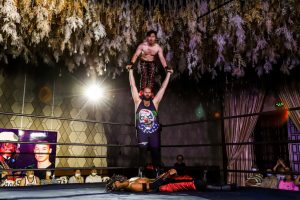 Ray splashes off Johnny’s shoulders onto the prone Dragon for three.

Much better matches than the weekly product. Nearly all the issues fixed. Hope to see more of this in the future from MKW.