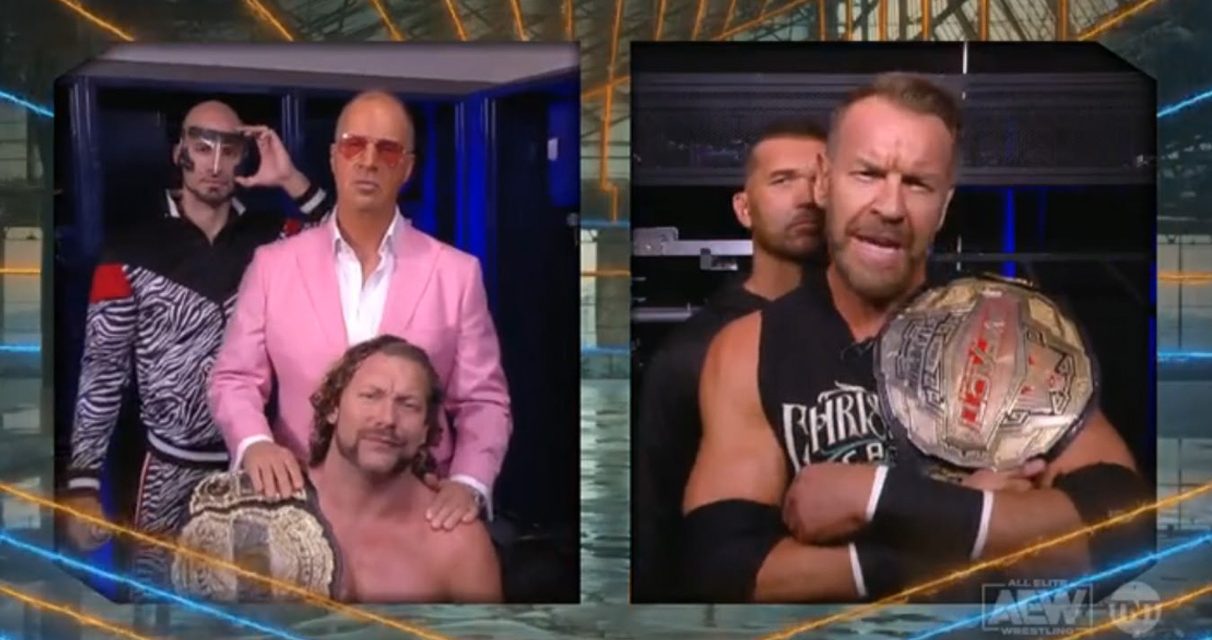 Man, switching on Rampage after Smackdown every week is like driving around around for two hours in a clunky, dilapidated, rusty old station wagon that stalls every three miles before you hop into the DeLorean from Back to the Future, putting the pedal to the metal and blazing off into the future in a puff of smoke.

This week our main event is AEW World Champion Kenny Omega teaming up with his stooge Brandon Cutler against “The Elite Hunter” Frankie Kazarian and Impact World Champion Christian Cage. As you might guess Cutler is just there to look like a jackass and be a human punching bag for Omega. Every time Omega is in trouble he of course tags in Cutler. Also at ringside running interference for Omega is Don Callis in his bright pink suit and that waste of space, Michael Nakazawa.

Chris Jericho refers to Cutler’s get-up as inspired by the cover of Kiss’ Animalize. Speaking of Animalize, it is time for a musical interlude so here is the best track off of the album for your listening and viewing pleasure. Take it away Paul Stanley and the boys.

Paint the sky with desire
Angel fly
Heaven’s on fire

Back to the action…

From the floor, Nakazawa distracts Kazarian so Omega can get the drop on him. Kazarian fights back with a Russian Leg Sweep on Omega and a tag to Cage that has Omega scrambling away.

“Come on,” says Christian rolls his eyes as Omega brings Cutler back in.

Cutler gets battered around until Kazarian drapes him over the top rope, hauls off and just kicks him in the chops. Cutler drops to the arena floor with a hollow thud. Kazarian follows him out chasing off Nakazawa. When Kazarian turns his attention to Cutler, Nakazawa smashes his lap top over his back. Let’s hope it was a cruddy Dell. Kazarian backs Nakazawa up right into Christian who snags Nakazawa by the scruff of his neck throwing him into and over a ringside barrier. Omega catches Kazarian with a clothesline as he turns around. 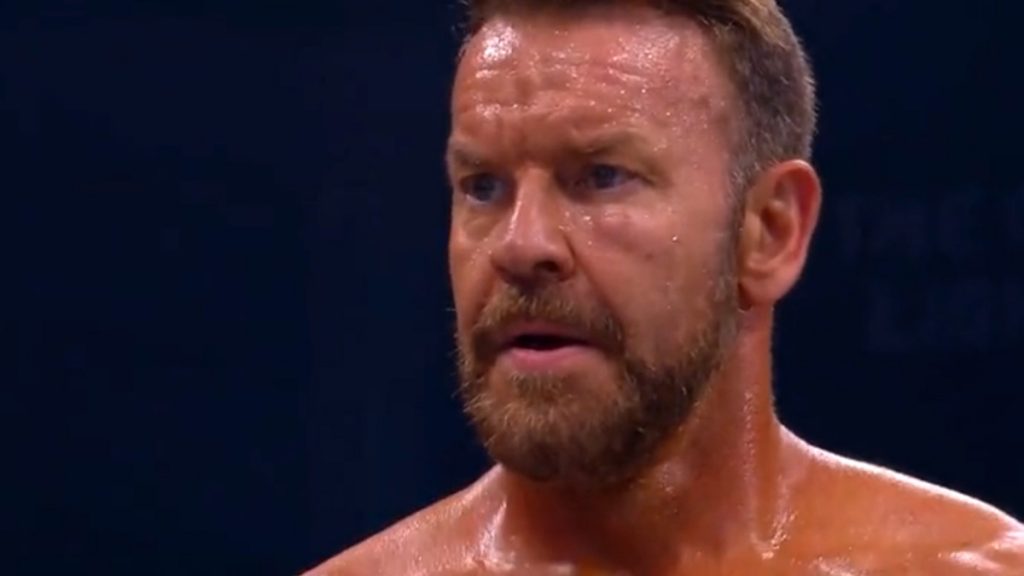 Cage is not too happy with Omega. Courtesy: AEW.

Don Callis is up on the apron distracting the official as Omega and Cutler double-team Christian. Christian ducks an Omega knee trigger which snaps Culter’s jaw instead. Christian has Omega in the Kill Switch. Omega bails from the ring leaving Cutler all on his lonesome. Christian pins Cutler with a spear and a Kill Switch.

A note on Kazarian, they should make him go full Punisher portraying him as he first appeared in the comics. When he was first introduced Frank Castle he took the letter of the law so seriously he viciously punished people for things like littering and jaywalking. Imagine Kazarian turning into a crazed squared circle vigilante beaning someone with a baseball bat or a chair for not breaking a count quick enough, etc. That could be cool.

Before the bell can ring two senior citizens take a their seats in special chairs on rampway to take in the action. Oh, that’s not Statler and Waldorf. That’s the Young Bucks. My mistake.

Fenix and Jungle Boy shake hands before tagging in their partners. Once the dinosaur man is in the ring Penta gets thrown around like a Europasaurus carcass. Fenix tributes Eddie Guerrero with his frog splash. Jungle Boy has Fenx stuck in the Snare Trap. Penta makes the save with a kick to the head. Fenix flips Jungle Boy with a hurricanrana off the top rope onto everyone else who is clustered on the floor.  In a mind-blowing move, Penta uses Fenix like a springboard giving Jungle Boy a Destroyer on the ring apron. Luchasaurus takes one too but kicks out at one. The Lucha Brothers super kick Luchasaurus into oblivion pinning him. The Old Yucks attack Lucha Bros from behind. Jurassic Express dives back in the ring to send the Yucks scurrying back to the nursing home. 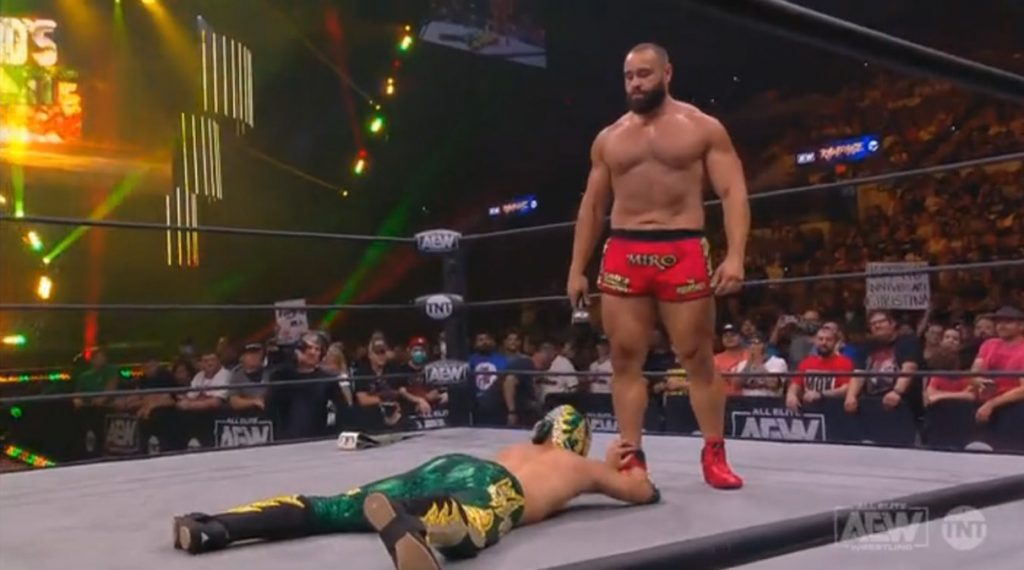 Miro stomps down to the ring for an interview. He brings out Fuego del Sol out with him. He laughs as he kicks him down the rampway and heaves him into the ring. Tony Schiavone takes a hike. Miro will forgive Fuego but he must pay for what he has done. Miro rips off Fuego’s mask. A furious Eddie Kingston appears mike in hand. Kingston thinks about cutting one of his phenomenal promos then decides against it. He drops the microphone charging the ring and Miro. They brawl until the herd of zebras separates them. Kingston picks up the crucifix Miro tore off of his neck. He has a crazed look in his eyes. I wouldn’t want to be Miro.

The Bunny versus Tay Conti 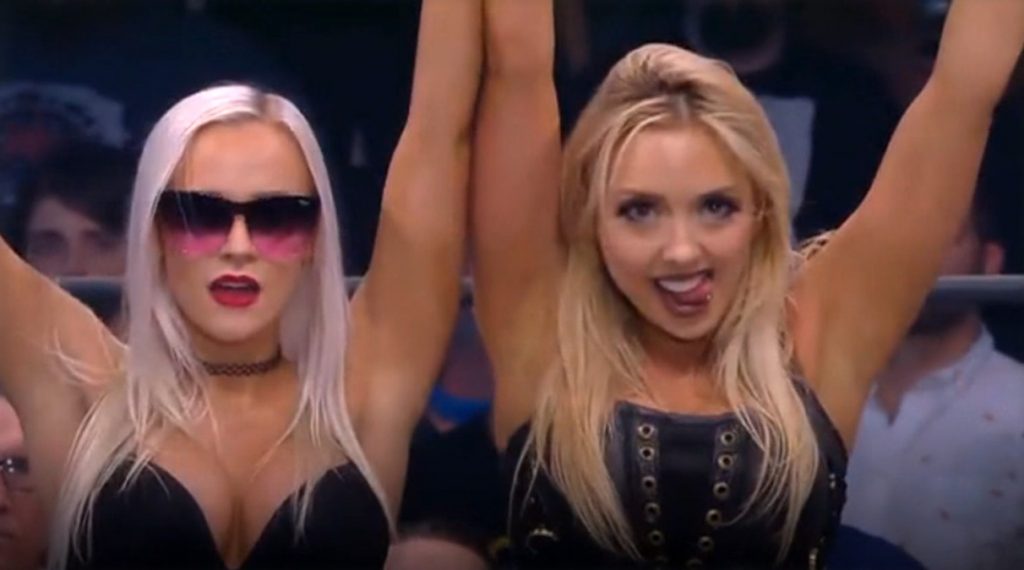 Ford and Bunny are all smiles. Courtesy: AEW.

The crowd is not into this match at all. The Bunny clobbers Conti before the bell even rings. Aubrey Edwards puts her hands on The Bunny forcing her back into a corner. Yeah, that’s out of line. Officials shouldn’t be putting their hands on wrestlers. I don’t like that about Edwards. Bunny is all over Conti until Tay dodges a chop. She unloads on The Bunny with three running kicks to the face and a Go To Sleep. Out comes Penelope Ford to get Conti’s attention. As she does, The Blade slips Bunny a pair of brass knuckles. She slugs Conti for the pinfall. The Bunny, Ford and The Blade celebrate while Conti picks her teeth up off the mat.

Another solid show, especially that insane opening match. Like them or not, the steel cage match between the Yucks and the Lucha Bros at All Out is going to be off the chart. The women’s match let the the air out of the production though. It just didn’t keep the momentum going. Come on, AEW. Turn Frankie into Frank Castle. Do it! Do it!