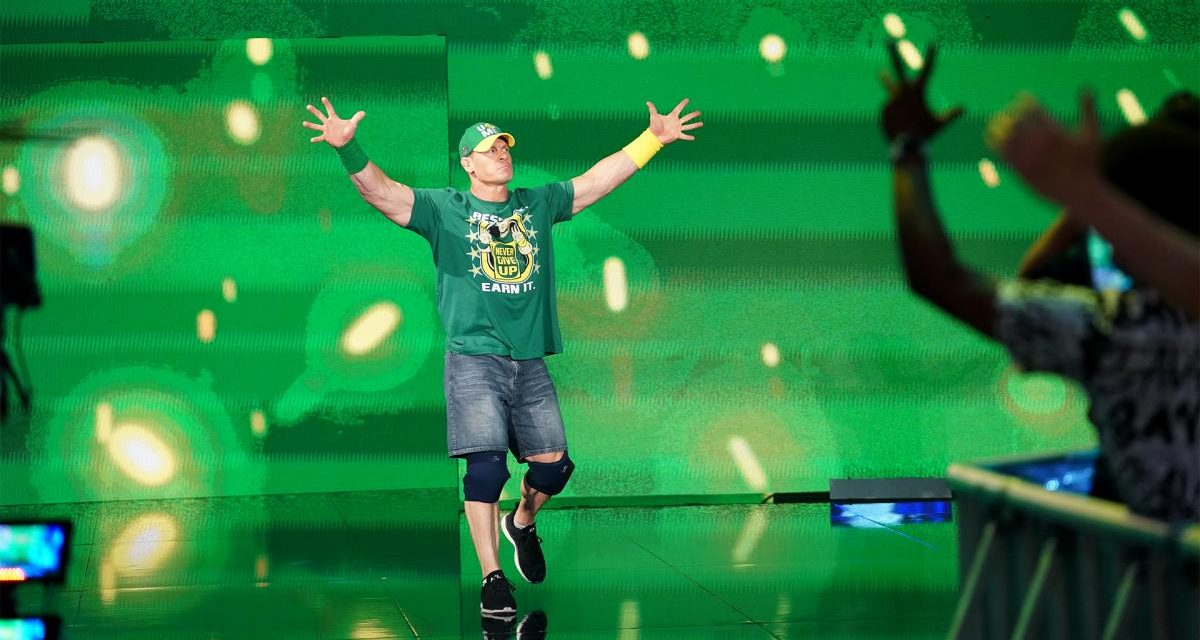 John Cena comes out to address the crowd to start the show. He asks the crowd if Roman will beat the hell out of him at SummerSlam, but Cena will win regardless, and there’s nothing Roman can do about it. Roman makes his brutally long entrance to the tune of “Roman Sucks” chants. Roman tells Cena not to waste his time and just say whatever he wants to say. Cena says he’s going to embarrass him at SummerSlam. He says that Roman pretends WWE is his, but it belongs to the fans. Cena reminds Roman that if he wins at SummerSlam, he’d be the most decorated WWE Superstar of all time, and all he needs to do to achieve that is pin Roman.

Roman takes a second to list all of Cena’s accolades, saying he’s good enough to main event SummerSlam against him, but not good enough to beat him. Cena says that Roman has had protection from so many people. The Usos, The Shield, but despite all that, all Cena needs to do to win is survive and hang on until 1,2,3. Cena says when he wins, he’s going to run right out of the stadium with his title, and he might even blow Roman a little kiss as he leaves.

Crews attacks with a suplex for 1 to start off the match, but Nakamura rallies with a flying kick, Good Vibrations and a knee drop for 2. Crews attacks with a dropkick and a running back elbow, but Nakamura returns fire with a series of knees to the gut. He looks for a superplex, but Crews sends him to the mat with a headbutt. Boogs distracts Crews with a guitar solo, so the ref throws him out to the backstage area. The sides get even, however, when Azeez tries to enter the ring, and the ref catches him and tosses him out as well as we go to commercial. 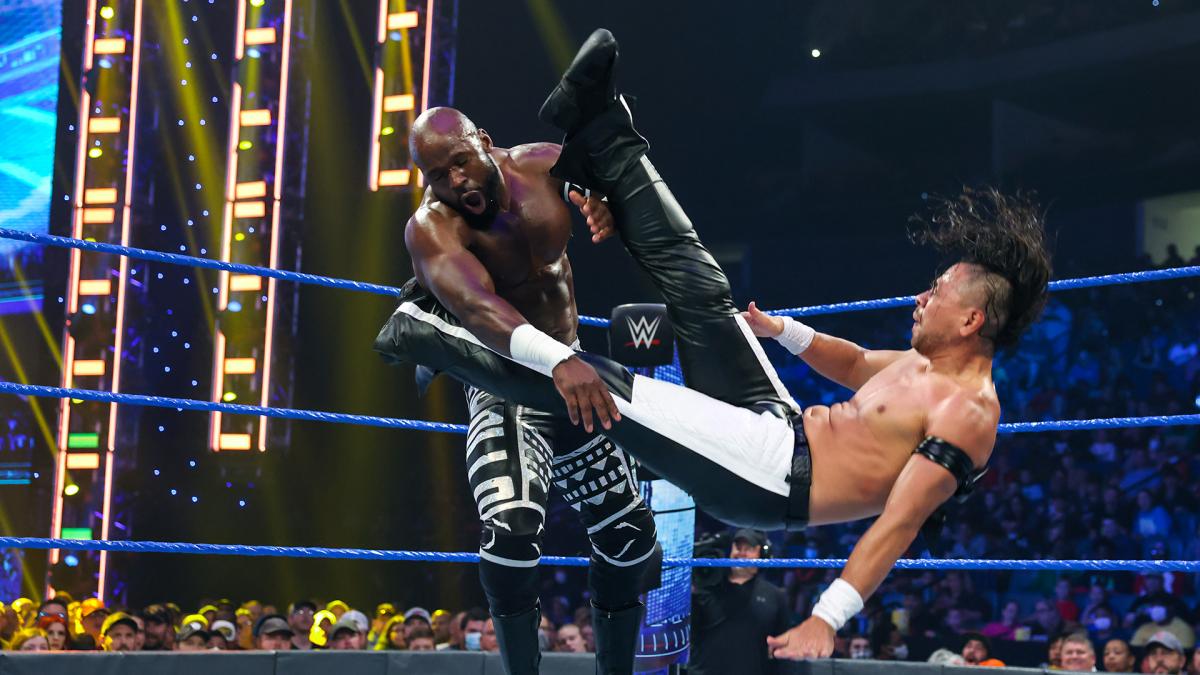 When we come back, Crews is delivering a brutal superplex, but he only gets a 2 count. Crews hits a series of powerbombs for another 2, frustrating Crews. The champ goes for a Frog Splash, but Nakamura gets his knees up. Nakamura goes for the Kinshasa, but Crews rolls him up. He uses his legs on the ropes for leverage, and the ref catches him, negating the pin.

Crews hits a German Suplex for 2, and he looks for the Olympic Slam, but Nakamura reverses it into an arm drag before hitting a kick and a landslide for a close 2. He hits an exploder suplex, followed by a Kinshasa to pick up the win and the Intercontinental Championship.

Chad starts off the match by simply out wrestling Ford, tossing him onto his back and locking in an armlock. Ford fights out and rolls up Chad for 2, before hitting an enziguri. Chad backs into his corner and tags in Otis. Ford tries his best against Otis, but gets slammed hard. Dawkins tags himself in and hits a splash, but Otis quickly gets the best of him as well with a giant throw. He hits a spear in the corner and tags in Chad, who spears him as well.

They trade tagging and spearing for a while, before Dawkins shoves Otis out of the ring, by shoving the legal man, Chad, into him. Ford dives onto Otis on the outside and Dawkins hits the Silencer on Chad to get the win for his team. 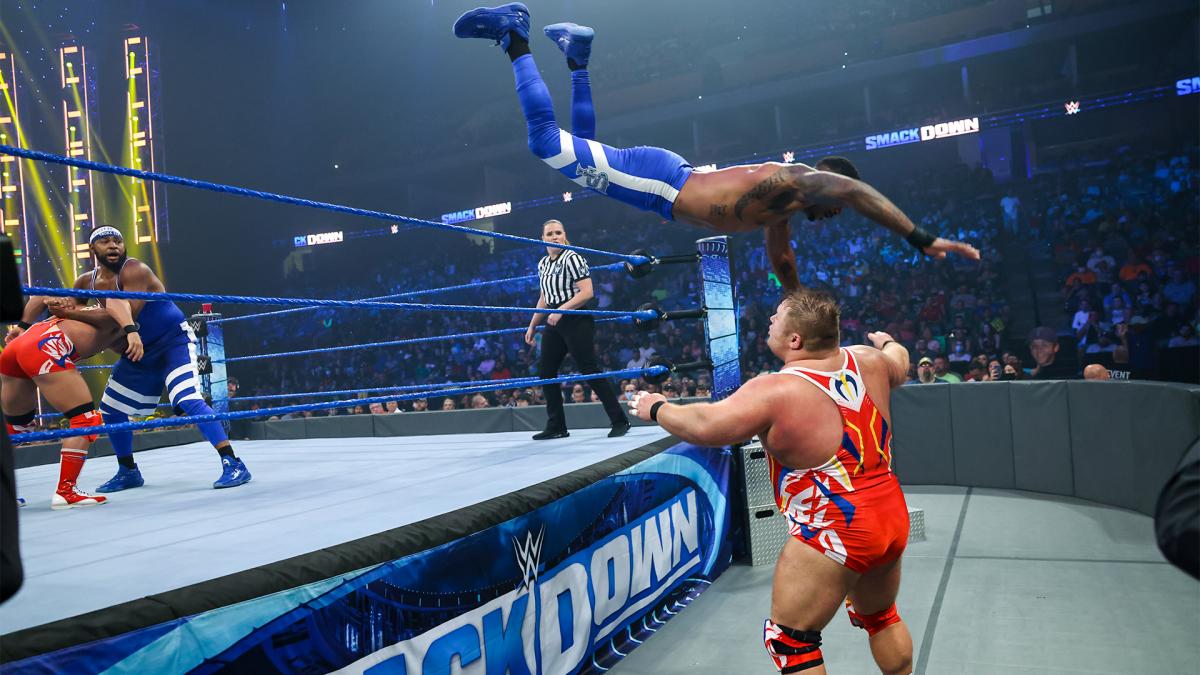 The laws of gravity simply to not apply do this man. Photo: WWE

Seth Rollins comes out, telling the crowd that unfortunately, his sources tell him that Edge isn’t here tonight. The crowd chants “We Want Edge,” and Seth says he wants him as well, but at least they have “Edge Lite,” as Edge called him last week. He says that in fact, he’s not Edge Lite, but the improved version of Edge. He shows a retrospective of he and Edge’s careers showing how Rollins did what Edge has done, only better. I’ll be honest, he does raise a lot of good points. 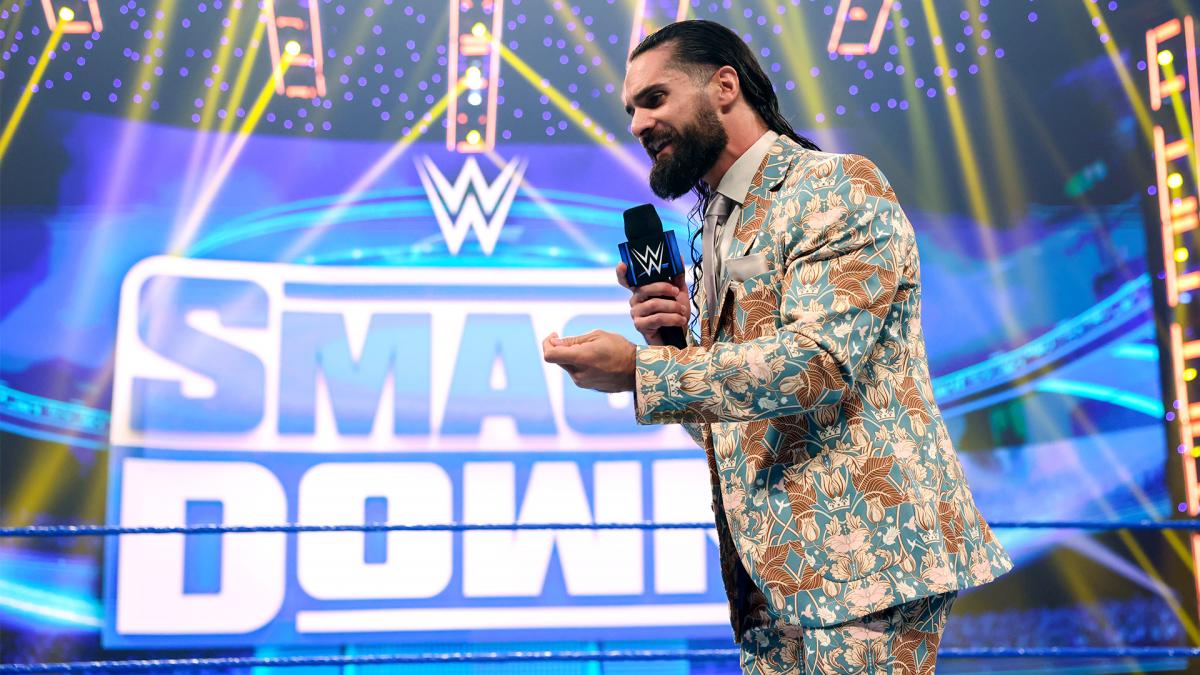 It really doesn’t get said enough that Rollins has truly had an incredible career so far. Photo: WWE

Rollins says that Edge and the entire WWE Universe should be thanking him, because he didn’t Curb Stomp Edge’s career away. Rollins reminds Edge that it isn’t 2014 anymore, and that at SummerSlam, Rollins will Stomp his head into the mat, and if that takes him out for good, so be it.

The Mysterios VS The Dirty Dogs

Rey starts out fast with a headscissors on Roode, but Roode fights back with a backbreaker. Roode tags in Ziggler, who delivers the splash, before the two deliver a running knee/Russian leg sweep combo for a 2 count. Ziggler locks in a Sleeper Hold, and when Rey starts to fight out, Ziggler pulls him over to his corner and tags in Roode. Roode stacks Rey up on the top rope and tags in Ziggler, but Rey hits a seated senton on Ziggler before tagging in Dominik.

Dominik hits a neckbreaker on Ziggler but Ziggler returns with a Famouser for 2. Dominik knocks Ziggler into position for the 619, but the Usos appear on the TitanTron, mocking Dominik and distracting him. Rey gets Dominik’s attention back on the match, and Dominik rolls Roode up to get the win.

Winners via pinfall: The Mysterios

Baron Corbin comes out to ask for help one last time. He asks every member of the crowd for 1000 dollars minimum, and that’s when Kevin Owens has heard enough. Owens says that he once thought that Corbin was like him, someone who made mistakes but learned from them. But in fact, he’s just someone trying to take advantage of people’s sympathy for him. Corbin says he’s not going to leave this ring until Owens gives him 1000 dollars.

Owens says he’ll give him 1000 dollars if he beats him in a match, but if Owens wins, Corbin has to stop asking people for money. Corbin accepts, but says that he wouldn’t be in this situation if Owens wasn’t so cheap. Owens answers that with Stunner.

Corbin tries for a rollup to start the match, but he only gets a 2 count. Owens attacks with a clothesline and a senton. He slams Corbin into the barricades and hits him with a brutal chop. Corbin goes for his ring around the ringpost clothesline, but Owens catches him with a superkick before delivering a cannonball for 2.

Owens goes for a Frog Splash, but Corbin punches him to the floor. Owens makes it back into the ring, and Corbin punches him and pins him for 2. He hits K.O. again and the two go to the apron, where Corbin hits Owens with a brutal backdrop as we go to commercial.

When we come back, Owens is looking for an attack from the top rope, but Corbin meets him up there. He looks for a superplex, but Owens shoves him to the mat and delivers a senton for a close 2. K.O. looks for a Pop-Up Powerbomb, but Corbin reverses it into a chokeslam for 2. The former king looks for the End of Days, but Owens fights out of it, only to be met by Deep Six for 2.

Corbin gets frustrated, repeatedly pinning Owens and only getting a 2 count. He sends Owens into the ringpost and rules him up for 2, but Owens returns with his own rollup to get the win and keep Corbin from pestering the WWE Universe for money.

After the match, Kayla Braxton asks Corbin what his next move is. He doesn’t seem to have one, until he sees Big E carrying around the MITB briefcase. Corbin grabs it and sprints away gleefully.

It’s time now for the contract signing between Bianca Belair and Sasha Banks for SummerSlam. The two trade barbs, with the words “jealous” and “backstabber” being thrown around. Sonya Deville refuses to let another contract signing go awry, so she gets the two to zip it and sign. Sasha brings out Carmella and Zelina Vega as “witnesses” to the signing before writing her name on the contract.

Belair signs her name and immediately attacks all 3 women. She’s able to take out Vega and Carmella, but Sasha hits the champ with a backstabber before slamming the EST’s face off the table. The show ends with Sasha locking in the Bank Statement with Belair’s braid wrapped around her face.

I’ll be honest, I quite enjoyed this show. Shinsuke winning the Intercontinental Title was a delightful surprise, and Cena’s “1,2,3” promo was pretty cool. I’m getting pretty hyped up for SummerSlam!