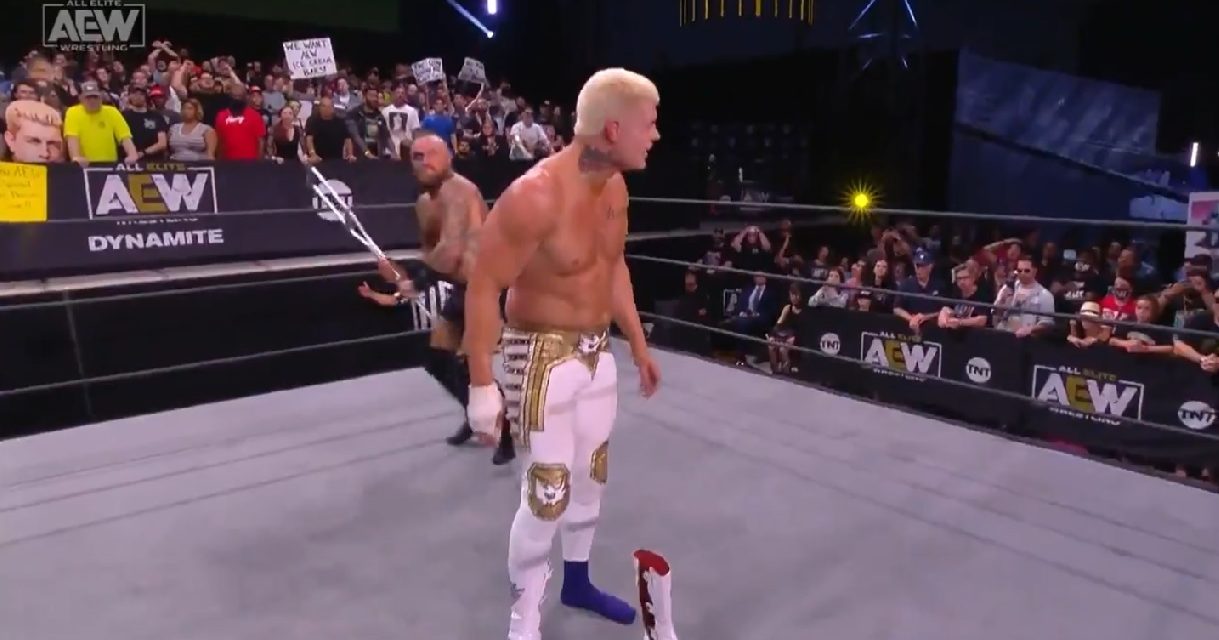 After hitting the road for several weeks, AEW Dynamite returns to its ongoing home tonight in Jacksonville. What’s on tap for Daily’s Place? A TNT title match for starters, plus a number one contenders bout and the continuing Labours of Jericho. Canadian spelling, FTW. The crowd should be live to welcome Dynamite back, so let’s switch away from the Olympics for a few hours and go live on TNT.

It’s the third Labour of Jericho, where he must hit a move off the top rope to win. Sounds like a walk in the park compared to a Death Match against Nick Gage, but we’ll see. For those who weren’t around for the WCW days and why this matchup is notable, please watch this classic segment from Jericho’s WWF (as it still was back then) tenure:

MJF joins the announcers and gets in his typical insults while Jericho tries to unmask Juvie. Of course we’ve already seen his face plenty of times, so … yeah. And of course Jericho can’t fly like he did back in the day, but he can hit the Judas Effect off the top, and does exactly that to pass the third Labour.

After the bell, Wardlow enters the ring to stomp on Jericho and deliver an F-10 to Guerrera. Is someone coming to the Demo God’s aid? No one?

Backstage, the Lucha Brothers are sans Pac, who has been having travel problems. Who could have done that, wonders Alex Abrahantes? Andrade El Idolo makes another recruitment pitch, but can only smile as he gets rebuffed again.

The Dark Order is about to speak to Tony Schiavone when a remorseful Adam Page stops by. He thinks it’s best for them to go their separate ways to handle his own problems with The Elite, and while the group is upset, Evil Uno suggests giving him some space.

So Garcia and 2.0 say the best thing about being in AEW is the ability to call out whoever they want, but the question is whether they should go right for the top right away. Let’s see if this is a smart move. The confrontation between the 2.0 guys and Sting on the outside is worth the watch just for the facial expressions alone. The newcomers make a fine effort but fall in the end as expected to a Darby Allin Coffin Drop.

The beef between Team Taz and former member Brian Cage certainly isn’t over. And it’s letting Cage speak for himself, which hasn’t been that bad so far.

The Elite is in a jovial mood backstage, doing basketball tricks and joking around. The Good Brothers are willing to give the Dark Order a shot at their belts, while the Young Bucks feel like there is no one left to challenge for their straps. As for Kenny Omega, he can only laugh at Page for losing his opportunity and his friends. The Elite has Brandon Cutler cut down the basketball net in ceremonial fashion since they feel like they’ve won everything for good.

Christian Cage vs. The Blade

The Bunny gets involved very early on, but is neutralized by the woman she’ll face later tonight, Leyla Hirsch. As hey fight to the back, Jim Ross and company put over The Blade for both his fitness and his confidence, but really it’s just a matter of increased opportunity — as in, he’s getting a nice push at the moment. Blade tries to cheat to win by bringing some brass knuckles into play, but Christian spears him for the three count to remain undefeated in AEW.

The battle between Santana and Ortiz and FTR also continues on, even after it got bloody last week. Maybe more blood when they meet again? I wouldn’t bet against it.

Is Dr. Britt Baker, D.M.D., excited to return to the city where she won the AEW Women’s World Championship? We may never know, as she’s immediately confronted by Red Velvet. Britt notes that she already beat red in a matter of minutes, but Velvet points out that was before she was 22-4 with seven straight victories. Baker grants the title shot, and on a big stage: on the debut of AEW Rampage next week in Pittsburgh. Lest we think the champ has turned full face, she has Rebel try for a cheap shot, then gets in some of her own.

On a night full of interruptions, Chavo Guerrero barges in on Andrade’s interview and presents someone who will work for Andrade: Fuego Del Sol. Except his job is to shine Andrade’s shoes, and then it changes to getting thrown into a metal door. I don’t think that pays well either. Chavo warns the Lucha Bros. that if they keep working for Pac, they’ll never be champs.

Back out in the ring, Schiavone tries to get more of Page’s thoughts but the segment is quickly crashed by The Elite. Undeterred, Page says he has something he wanted to say to them for quite a while, but Omega and company climb between the ropes to cut him off. Kenny accuses him of making a plea to rejoin The Elite, and even when he says that’s the last thing he’s here to do, the champ continues to push Hangman’s buttons, stating that there are no loser in their group. Page slaps Omega, earning him a beating from the Bucks and Good Brothers, and when the Dark Order tries to rush to his aid, Evil Uno and Stu Grayson stop them. Frankie Kazarian isn’t so easily halted, but he’s quickly overwhelmed by the numbers game. Omega smashes Page in the face with the AEW title, looking more or less unbeatable right now.

On man, I almost forgot about Dan Lambert of American Top Team. He says he hasn’t forgotten what Lance Archer did to him and is bringing backup with him next week to … get payback, one presumes.

We all agree that Big Shotty has no shot here, right? OK, yes. So the question becomes whether he’ll be squashed or get to put up a battle, and since the match goes through a commercial break, I’ll say he is bringing the fight — including on a tope con giro where it appears Miro is supposed to catch Johnson but the challenger just has too much momentum. Johnson also hits a big frog splash for two, meaning he’s made it further than almost any contender since Miro has held the TNT title. Alas, Miro weathers the storm and holds onto his belt, but I do like Johnson getting the rub this way.

The Rampage announce team will be Excalibur, Chris Jericho, Taz and Mark Henry, which is a lot of voices but sounds pretty cool.

I mean, Christian really should be the number one contender for the AEW Championship since he hasn’t lost a match yet, and he is. Schiavone asks if he is going to back Hirsh up, but after singing the theme to The Golden Girls, he says that Leyla says she has friends to watch her back: Best Friends. He also states that he’ll be in Pittsburgh next week for both shows and has been known to stir up some trouble, and that he’s better than good at it — he’s elite.

The Bunny vs. “Legit” Leyla Hirsch

The Hardy Family Office could always be a factor here, but the Best Friends are indeed on hand to support Leyla as well. This match is to determine the number one contender for the NWA women’s title, so the stakes are definitely high. Like Blade, Bunny has received more of a push in recent weeks as well, but she isn’t quite as much of a perceived threat as Hirsch, who gets Bunny to tap out to a cross armbreaker. Kamille comes into the ring for a staredown, and my goodness, she has quite the height advantage on Hirsch.

Why is Jade Cargill not in the title picture? She and her manager have been expanding the #JadeBrand, as it turns out. She’ll be back in action next week, never fear.

This is Black’s in-ring debut in AEW, though he’s been causing some havoc for the last few weeks. He’s certainly not going far from the gimmick he used in his last stop, and the announcers put over his legitimate striking credentials in a similar manner as well. Cody is up to make this one memorable, taking a kick while on the top turnbuckle that sends him crashing down through the timekeeper’s table. I could see Rhodes taking the loss here for the sake of building Black up as quickly as possible, or some shenanigans taking place. It turns out to be the former, as Black lands a kick that has Cody flat on his back, then just stands on his chest for the three count.

There are still a few minutes left in the show, which could mean something … or nothing. Schiavone heads to the ring to speak to Rhodes, who is coming to slowly. He talks about legacy and how he was originally motivated to avenge a title loss by his dad. Wait, this is starting to sound like a retirement speech. Cody talks about how people laughed when Omega and the Bucks said they were going to start a revolution, and that he will forever tethered to them. Rhodes says he loves the fans and how they’ve made his life incredibly special, and he bends down to take off his boots … but gets walloped in the back by a crutch shot from Black. Maybe we’ll get Cody’s version of the Ric Flair “I will never retire!” speech next week. You know there’s only one way to find out: See you in seven!

Really enjoyed the pacing and in-ring action in this show, and a lot of logical things are sliding into place: Christian as number one contender, The Elite pushing Hangman Page down to an even lower place, and Cody putting over Malakai Black. Even Lee Johnson getting more of the spotlight was fun. It’s good for AEW to have some momentum leading into the debut of Rampage next week, and they seem to have it right now.