RAW: One last time into the ThunderDome 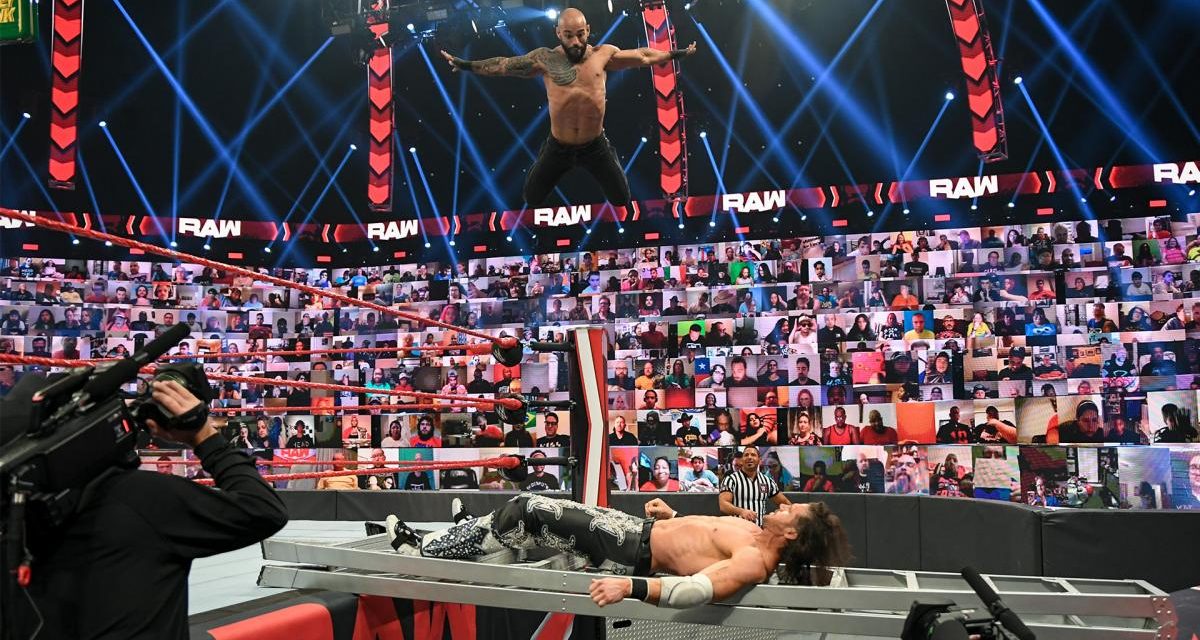 Tonight marks the end of the ThunderDome era on Monday Night RAW. Next week, the crowd will be live, BAYBEE! That being said, tonight is the go home show for Money in the Bank. There isn’t much left to set up for the show on Sunday, so let’s just get down to it. For the final time, let’s head into the THUNDERDOME!

It is almost fitting that the last RAW in the dome, actually starts off with a match. There wasn’t even ten minutes of promos before hand either. MVP wants Lashley to make and example of Woods and he has the VIP booked and ready to go. Lashley with a single leg take down and then tosses Woods across the ring. Xavier slows things down with a head lock and knees Lashley in the head. Bobby catches Woods, tossing him over the ropes onto the apron. On the floor, Lashley picks Woods up again, this time dropping him onto the ring steps as we go to commercial.

After the break, Lashley is pounding on Woods in the corner. Xavier dodges a charge in the corner and lands a superkick. He follows with a tornado DDT. Lashley goes to the floor, so Woods flies over the top rope with a plancha. Xavier catches himself on the apron and responds with an enziguri. He goes up top to connect with a missile drop kick. Lashley with a side slam, slowing Woods. Lashley with a slam followed by the Dominator. He dumps Woods to the floor.

On the outside, Woods in run into the ring post head first. Lashley rolls him into the ring and looks for the spear. He connects. Lashley covers after taking some time to pose. He pulls Xavier up by the hair, but Woods counters with an inside cradle and gets the three count.

Kofi and Xavier celebrate in the ring as Lashley storms off.

After the break, MVP tells Kevin Patrick that Lashley left the building to blow off some stream, but he will be back for the VIP Lounge.

Earlier today, Jinder Mahal is given Drew McIntyre’s sword by Shanky and Veer.

Eva Marie wants to know when she and Doudrop are going to be introduced. Bliss gives their intro and she really like the name Doudrop, Eva puts an end to that fun. Eva calls her time on RAW; Eva-lutionary. She takes credits for winning the 8 women tag last night. Alexa wants to talk to Doudrop, not Eva, who she calls just a bonus. Eva takes offense, telling Alexa this is the last time she will set foot on the playground.

Jinder Mahal and his crew make their way to the ring. Jinder admits he may have taken things too far this week with McIntyre. Mahal wants to be the bigger man and will apologize and give back the sword. IT’S A TRAP! McIntyre doesn’t come out, instead choosing to appear on the Titantron. Mahal reveals that the sword was broken. Which is fine by Drew, because that sword was a replica and now he is in the back with Jinder’s custom motorcycle. Drew rips the bike apart.

Riddle is quite impressed by Nikki Cross’s super hero costume. She reminds him that she is Almost a Super Hero, so no flying just yet.

These four women are the RAW entrants into the Money in the Bank ladder match, so of course they get thrown into a fatal four-way on the last show before the pay per view. Eva Marie and Doudrop walk out to watch the match. Alexa walks out to meet Doudrop. The two talk, as Bliss sets her sights on Eva. She calls for Doudrop, who attacks Alexa and throws her over the security barrier. Eva walks over to the barrier, but Bliss has disappeared.

Back in the ring, Nikki escapes the Asuka lock and is able to roll her up and get the pin.

Sarah Schreiber gets a word with the Viking Raiders, who will face AJ Styles and Omos in singles matches. Ivar is upset that Styles has insulted their way of life. I’m guessing Styles never played Assassin’s Creed Valhalla. Erik has the tall task of taking on Omos.

Before the match, Styles cuts a promo in the ring. He apologizes for calling them barbarians. He should have called them hairy, uneducated barbarians that never should have gotten off the boat to come after the RAW tag team champions. Styles is still upset that they cost him a spot in the Money in the Bank ladder match. He vows to make Ivar tap out.

A chop to Ivar does nothing. Ivar then shows his agility with a cart wheel. He sends AJ in to the corner and hits a Bronco Buster. Omos distracts Ivar, allowing Styles to kick him in the back. Ivar kicks out after a DDT and then hits a splash. Styles floats over, but then catches a clothesline. Styles with a Pele kick, but then gets hit with the seated splash in the corner. Ivar holds on for the pin and gets the three count.

Got to love joining a match in progress. Omos is dominating Erik, picking him up over his shoulder. Erik escapes, but his kicks have little impact. Omos catches Erik in a bear hug. Erik with a forearm and a running knee, but Omos fires back with a clothesline. Omos stands over Erik and screams as Styles yells to finish him. Omos hits the big chokeslam and covers to get the pin.

Sheamus cries to Adam Pearce and Sonya Deville about having to defend his United States title with a broken nose.

The New Day runs into Lucha House Party. They wish Kofi luck in his match against Bobby Lashley. Sarah Schreiber jumps in and wants to know if this is a sing of things to come. Kofi puts over Woods. She tells them that Lashley has returned and will be in the VIP Lounge. Woods puts over Kofi.

Sheamus attacks Humberto Carrillo in the back, slamming him into scaffolding. Sheamus takes a swing at WWE officials and tells Carrillo he better not be sleeping on the job.

Carrillo is being helped in the back; Pearce offers to postpone the match, but Carrillo wants to fight.

The bells rings and Carrillo collapses coming out of the corner. Sheamus hits him with a Brogue kick and covers for the pin.

After the match, Sheamus stomps Carrillo into the mat. He threatens to break his face, until Damien Priest runs in to make the save.

Riddle and Ricochet talk about Money in the Bank. Ricochet pokes some holes in Riddle’s plan to cash in on the tag team champions. Miz and Morrison spray water at the two and then Miz runs over Riddle’s foot.

After the break, Morrison pulls out a ladder from under the ring. Ricochet launches himself off the apron to splash Morrison. Ricochet looks to fly again, but Miz gets in his way. He takes flight over Miz, anyway, but still can’t get the pin after the plancha. The two fight up the ramp to the stage. Morrison blocks a suplex. Ricochet floats over and hits a head scissors. Miz slowly wheels his way up the ramp and the two fight into the back.

Morrison with a running knee to a seated Ricochet, but he can’t get the three count. Morrison tosses Ricochet back onto the stage. Ricochet with a superkick. Miz yells at Ricochet, so he rides him down the ramp to attack Morrison. Miz squirts Ricochet again, allowing Morrison to get a near fall with a rollup. Riddle runs down and dumps Miz out of his wheel chair. Ricochet catches Morrison with the Recoil. Ricochet sends Morrison onto the set up ladder. He goes up top and hits the frog splash, sending Morrison through the ladder. He covers and gets the pin.

Sarah Schreiber asks Natalya what she is hoping to prove versus Rhea Ripley. Nattie wants to hold all three women’s titles at once.  Tamina hears Dana and Mandy and wants to take care of them. Mandy doesn’t love Nattie’s chance tonight.

Drew McIntyre tells Kevin Patrick that the Money in the Bank ladder match might be his last chance to reach the top of the mountain.

Sarah Schreiber catches up with Rhea Ripley before her match. Rhea tells her that she doesn’t back down from a challenge.

Rhea takes out Tamina on the floor with a drop kick, only to eat a discuss clothesline from Nattie. Ripley counters a Sharpshooter by rolling Natalya into the ropes. Ripley follows with a kick to the head and then hits Riptide and covers to get the pin.

After the match, Charlotte Flair attacks Ripley from behind with a chop block. Flair works over the knee, locking the figure four, stretching her out of the ring. Flair breaks the hold to taunt the champ.

Flair tells Sarah Schreiber that she learned from the dirtiest player in the game and Ripley will find out on Sunday.

Bobby Lashley is the special guest and he is not happy. He tells the ladies to excuse them as he needs to talk to MVP alone. Lashley says he is going to get back down to business and proceeds to destroy the lounge. He grabs a microphone to tell Kofi Kingston that he will destroy him and end his career on Sunday.

That’s it from the ThunderDome for hopefully the last time. See you next week!

Watch the Ricochet John Morrison match. That scored the show two stars. Not that everything else was bad, it just wasn’t that good either.