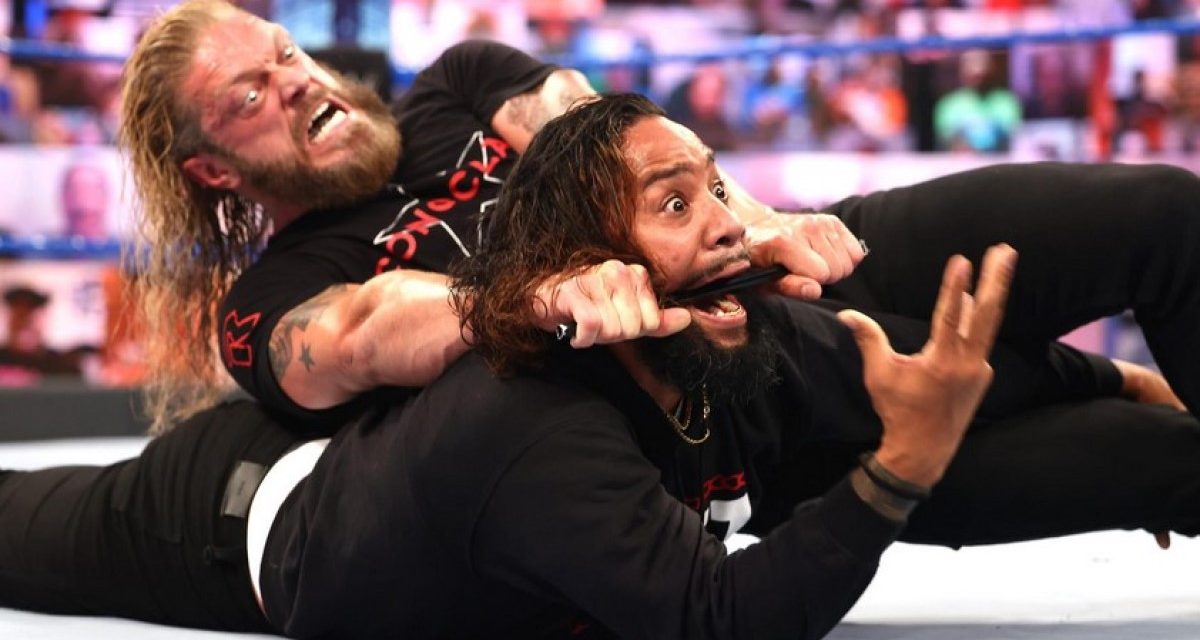 As LL Cool J would say, “don’t call it a comeback.” Edge is back again and laser-focused on Roman Reigns, but another familiar face makes a surprising return to SmackDown tonight to enter a different title picture.

Yes, SmackDown is named after one of The Rock’s catchphrases, and right now Roman Reigns is staking his claim as the face of the show — but for a little while, Edge was the driving force behind the blue brand, and seeing him open the show is both nostalgic and a testimony to his perseverance all at once.

He opens by lamenting the missed opportunity for a storybook ending of him winning the Universal Championship at WrestleMania, ten years to the day of being forced into retirement. He claims that Reigns has an awfully rosy memory of the triple threat match that featured the two of them plus Daniel Bryan. Edge argues that Reigns barely escaped that match, and that he has the champ’s number.

Backstage, Jimmy Uso and Paul Heyman are having an animated discussion about how Edge will get what’s coming to him. Well, Jimmy is animated; Paul looks like a still-life portrait.

Boogs introduces Nakamura as “Kingsuke”. Not sure if that sits right with me. What does sit right with me, though, is Pat McAfee taking his usual dancing on the announcer’s table to the next level by doing a squatting dance right on Michael Cole’s head (Cole can be heard saying “Get off me”). Also, once Cole refers to Nakamura as Kingsuke, I know I don’t like it.

It’s just dawning on me right now that the WWE has essentially bypassed another King of the Ring tournament and just crowned a new one. Consider that this match came about because Nakamura stole Corbin’s crown, and then Adam Pearce thought it would be fair for Corbin to have to win it back. Nakamura’s reign, however long it may last, will not live on for its inception.

Corbin stands on the apron looking utterly dejected as Nakamura starts off with Crews. The new king throws the Intercontinental champ into his corner, bringing him down to the mat for a double-teamed Good Vibrations with the help of Langston, and set to the tune of a Boogs riff.

Crews battles his way back to his own corner, forcibly tagging in Corbin who finally snaps to attention by fighting Langston out on the floor. Back from a break, Corbin is having his way with Langston inside the ring, tagging in Crews for the champ deliver a solid dropkick. A step-up enziguiri rocks Langston, and Corbin comes back in with a front-slam to get a two-count.

As Corbin cinches in a headlock on Langston, Boogs gets on the mic and calls attention to the owner of a white vehicle that’s currently being towed, bringing a shot onto the TitanTron. Corbin, seeing his own vehicle on the screen, is distracted by his latest run of bad luck, and Langston capitalizes with a Big Ending. Cole says that Corbin takes the loss before the count of three — at least pretend that you don’t know what’s coming.

The camera lingers on a crushed Baron Corbin for a while, as if we were watching The Undertaker after losing to Brock Lesnar.

Bayley gets some time in the ring to promote the upcoming return to live crowd WWE wrestling (in two weeks’ time), but mostly to take potshots at Bianca Belair’s current championship run. Belair, unsurprisingly, takes exception to this speech, skipping down to the ring to tell Bayley that she’s tired of having to deal with her. The champ challenges Bayley to an “I Quit” match for the championship at Money in the Bank. Bayley is pumped and accepts.

Backstage again, Jimmy Uso and Heyman have another one-sided conversation, with Jimmy looking to call Edge out tonight.

Owens starts hot with a quick Lou Thesz Press and a cannonball in the corner, forcing Zayn to roll to the floor for a breather. Owens follows, backdropping Zayn over the barricade, then following him and driving his head into a couple of ThunderDome screens. He throws him back to the ringside area, launches himself off of the barricade for a senton, then sets Zayn up on the announcers’ table for a splash. Zayn, however, grabs Owens and throws him onto the table instead. Owens takes seven seconds to get to his feet.

Owens slaps and chops Zayn mercilessly and the fight goes to the floor again. Owens drives Zayn into the post, back-first and then groin-first. After Zayn gets up before the count of ten, Owens pulls out a pair of tables from under the ring, stacking them up on one another. Owens sets Zayn up for a superplex that would go to the outside and onto the tables, but Zayn recognizes what a terrible idea that is and punches his way out. Zayn sets up his own superplex in the corner opposite to the tables, but Owens reverses it and brings Zayn down with his own suplex.

Back on the turnbuckles, Owens is thinking hurricanrana on Zayn, but Zayn turns it into a backdrop which sends Owens careening onto the set of tables. Zayn thinks he has the win, but Owens is up at the count of nine. Back from the break, Zayn is in charge, beating Owens up on the floor before Owens drives his former best friend’s face into the ringpost.

Zayn retaliates by, frankly, risking Owens’ livelihood with a belly-to-back suplex that brings Owens down headfirst onto the apron — but only for a count of six. A Helluva Kick follows, but once again Owens is back up. A second Helluva Kick. A third. Owens rolls out of the ring to land on his feet at the count of nine, and thereby taking me out of the match emotionally (as happens when three consecutive finishers fail to end a match of any kind). 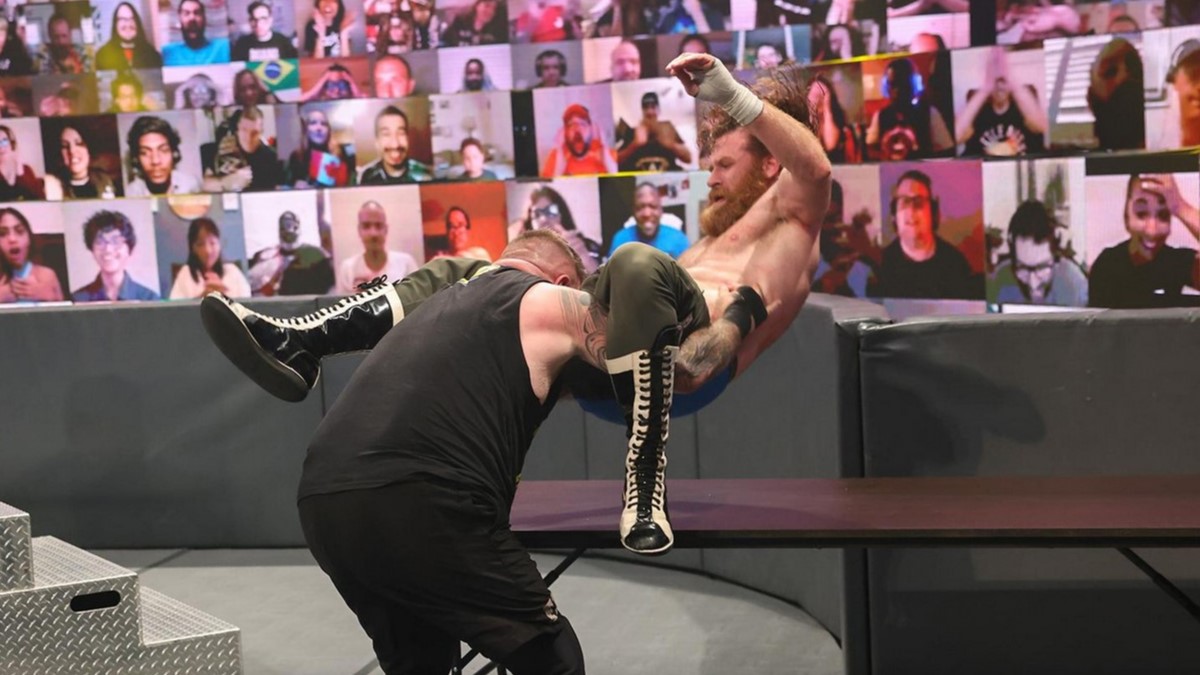 Owens and Zayn engage in some set re-decoration. Photo: WWE

Finally, that does it as Zayn can’t beat the count of ten.

Somewhere backstage, Megan Morant finds Edge and asks him what he thinks of Jimmy calling him out. Edge knows he’s walking into a trap, but he doesn’t care and will see Jimmy at the end of the show.

Elsewhere, Rick Boogs catches up with Baron Corbin and lays some lame puns using the word “king” upon him. Corbin is flat-out unamused and doesn’t even care enough to argue with him.

Back in the ring, Sonya Deville heads to the ring to announce her next choice for the women’s Money in the Bank match, and it’s a doozy: Zelina Vega! I’ve learned to never say never, but this isn’t somebody that I expected to see back anytime soon.

Vega talks up her championship plans without skipping a beat, as if she never suffered an ignominious firing from the company.

Hey, here comes Morgan to call out the nonsensical booking. Deville agrees to another match for Morgan to prove she belongs in the ladder match, so we’ll see how that goes.

We come back from a break with Vega holding Morgan in an Octopus Stretch, which was an unintentionally funny way to enter a match. Morgan takes a a boot to the head and a knee to the face, but she’s hanging on. Vega tries a roll-up holding onto Morgan’s tights, but the ref catches it and stops the count. Morgan rolls up Vega instead, holding on to her tights out of the ref’s eyeline for the win.

While Deville chats with Pearce, Seth Rollins strides in and demands a title shot instead of Edge. They counter with a match for him against Cesaro for a spot in the Money in the Bank match. That’s next week.

With Montez Ford on the injured list, Dawkins has to keep his head on a swivel. Gable distracts him immediately, though, allowing Otis to clothesline and overhead-suplex Dawkins, gaining the upper hand right away. Otis hits a second-rope splash, then a Vader-Bomb for an easy win. Cole again calls the victory before the three-count.

It’s time for the Jimmy/Paul show, part three. This time, Heyman has something to say, pumping up Jimmy with his newly acquired nickname “Main Event” Jimmy Uso … sounds somewhat familiar.

Jimmy heads to the ring, and he does exactly what he said he would do: call out Edge. It’s riveting TV, as he says “Where you at?” several times. Edge eventually steps out, and asks Jimmy to think about what Reigns is doing to control him.

Edge enters the ring spoiling for a fight, laying Jimmy out with a rather serious attack, until Jimmy slips in a superkick and evens the fight. Jimmy keeps looking around for someone — Reigns? Jey? — but Edge catches him with a big boot and cinches in a headlock, forcing a tap from “Main Event” Jimmy.

Edge lines up and lands a spear, then breaks off a piece of a ringside chair to use in a crossface as he did to Reigns at WrestleMania. Jimmy taps furiously to no avail before Edge finally releases the hold and crawls to the camera, telling Reigns that he simply will not stop.

A show that should have had a slam-dunk highlight of a match between Owens and Zayn that suffered from an unbelievable ending, and was instead dragged down by numerous matches of very little emotional investment. I’m glad Reigns didn’t show up, but not for the reason you may think: a champion should be used sparingly sometimes, and it did heighten the interest in seeing Reigns and Edge finally match up one-on-one.