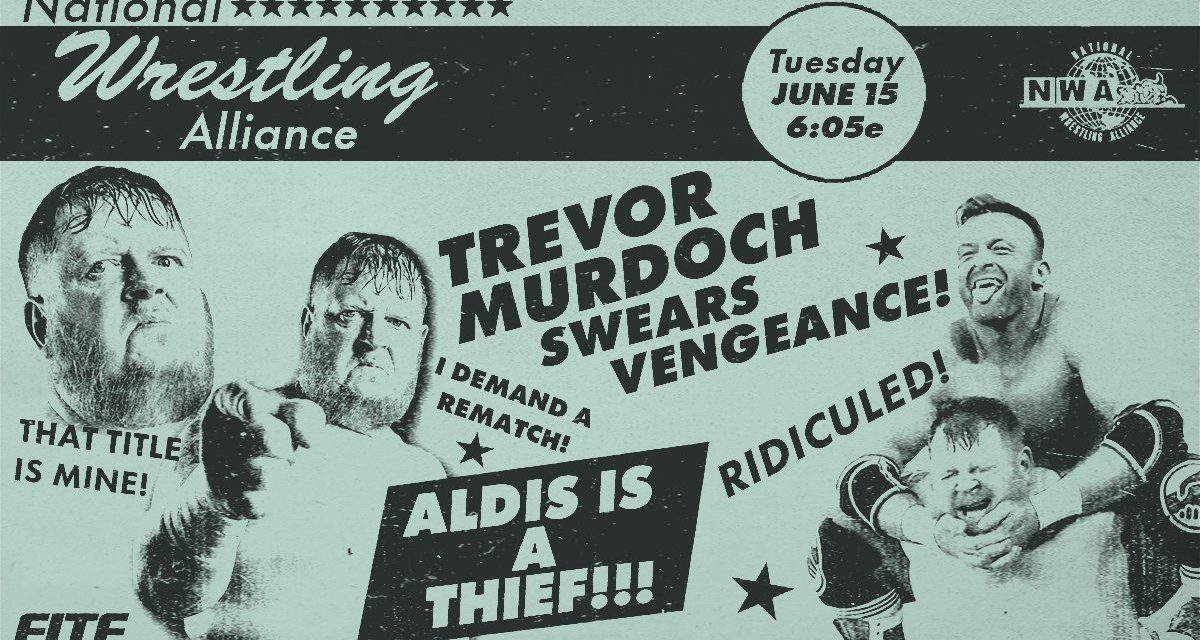 There’s a bunch of triple threat action, and accusations of thievery, on the latest NWA POWERRR.  Of course, you realize that means you stepped Into The Fire.  Live from the GPB Studios in Atlanta, GA, your commentators Joe Galli, Tim Storm, and Velvet Sky (It’s Velvet Time!) have the call.

We start with a cold open, recapping last week’s coronation, and Melina’s interference and Jennacide stepping in, and throwing Melina aside. Simply put, the line to get to Kamille and “The Burke” is not going to be an easy one.

We send it back at The Podium with Kyle Davis, and Trevor Murdoch is with him. The fans are behind Trevor, and Kyle addresses how close he was to the title. Trevor acknowledges he was angry, and went back home to put some perspective on everything, and he recalled how his wife pointed out he won, with Aldis’ own submission move, before the match was called.  With that knowledge, he realized that everyone (from Aldis’ tailor to his wife…we all know which wife Trevor is talking about) knows Trevor won. 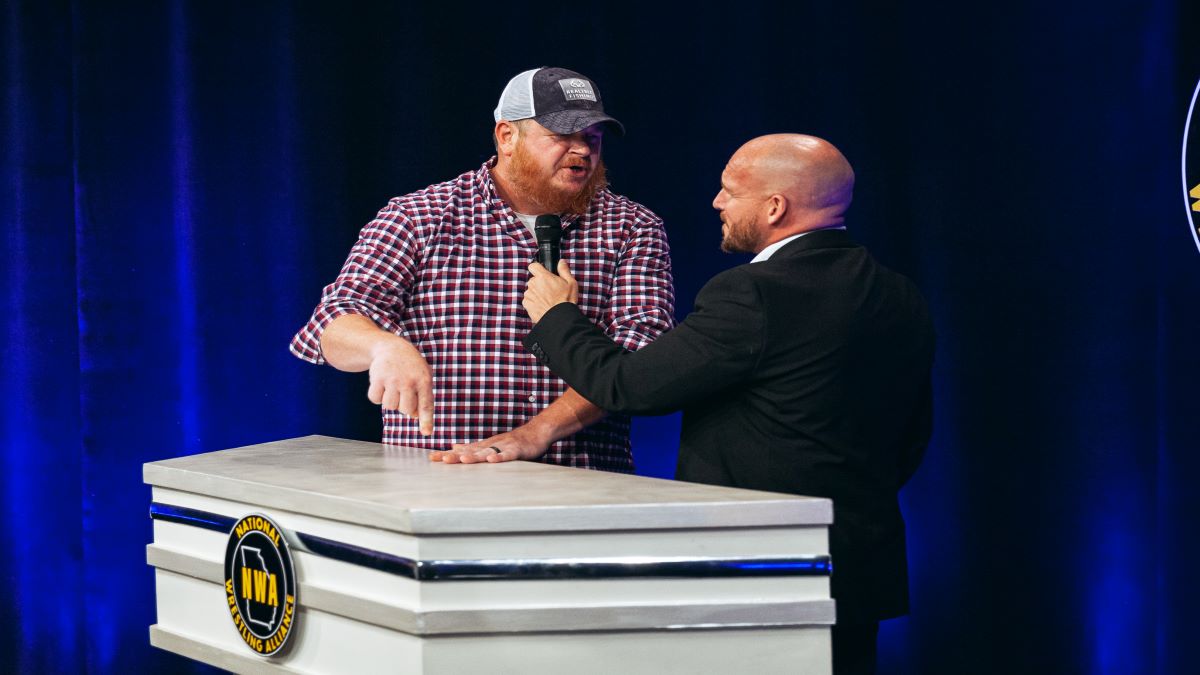 “You think that I’m done?” He asked Kyle. “WE JUST GOT STARTED!!”  Trevor vows he will not stop until he is NWA Heavyweight champion, and I am onboard for that news.

May Valentine is backstage with Austin Idol and Tyrus. Idol is hot that people are saying Tyrus cheated, and he spots on the floor (bad habit to have these days). Tyrus gets on the mic and says he’s angry, but not as bad as his manager.  Tyrus stresses that he beat Da Pope fair and square and…waitasec it’s Jordan Clearwater in a suit.  He says Mr. Jeez wants to meet him. Tyrus whispers something to Clearwater, and continues what he was saying…until Clearwater says he wants to talk to him and Idol. 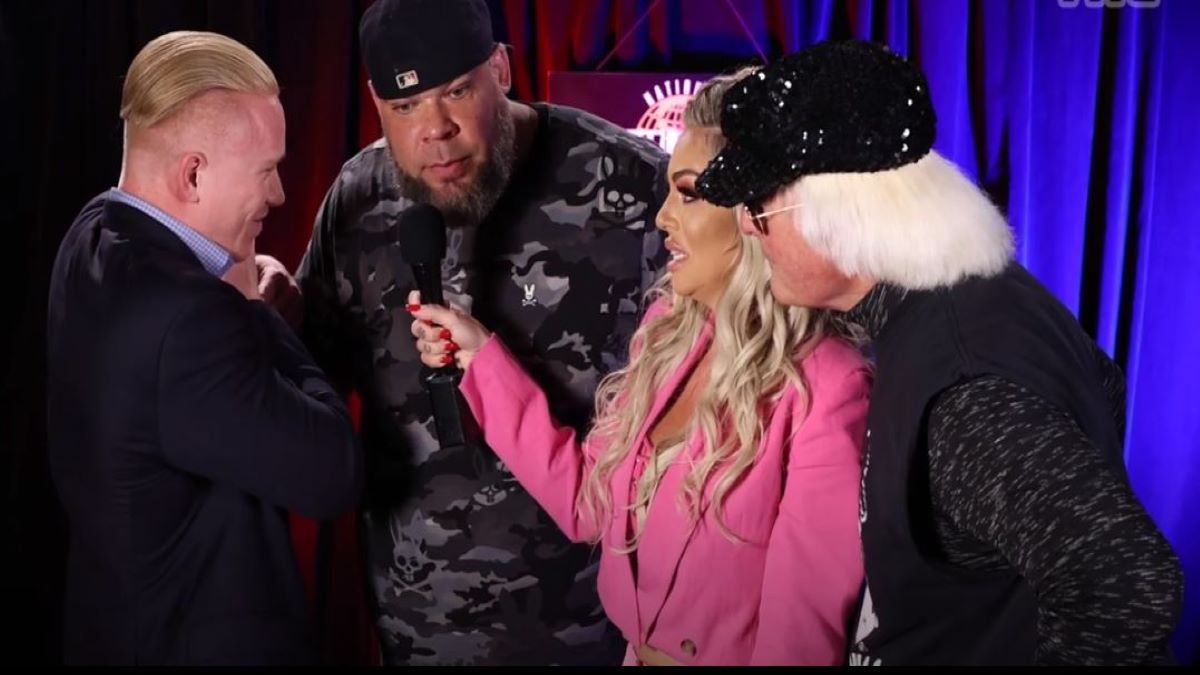 Tyrus calmly (and menacingly) puts his throat round young Clearwater, and says he’ll meet in the ring next week.  But no one tells him what to do.  Poor May is just caught in the middle, and we send it back to the ring for the First Match of the night… 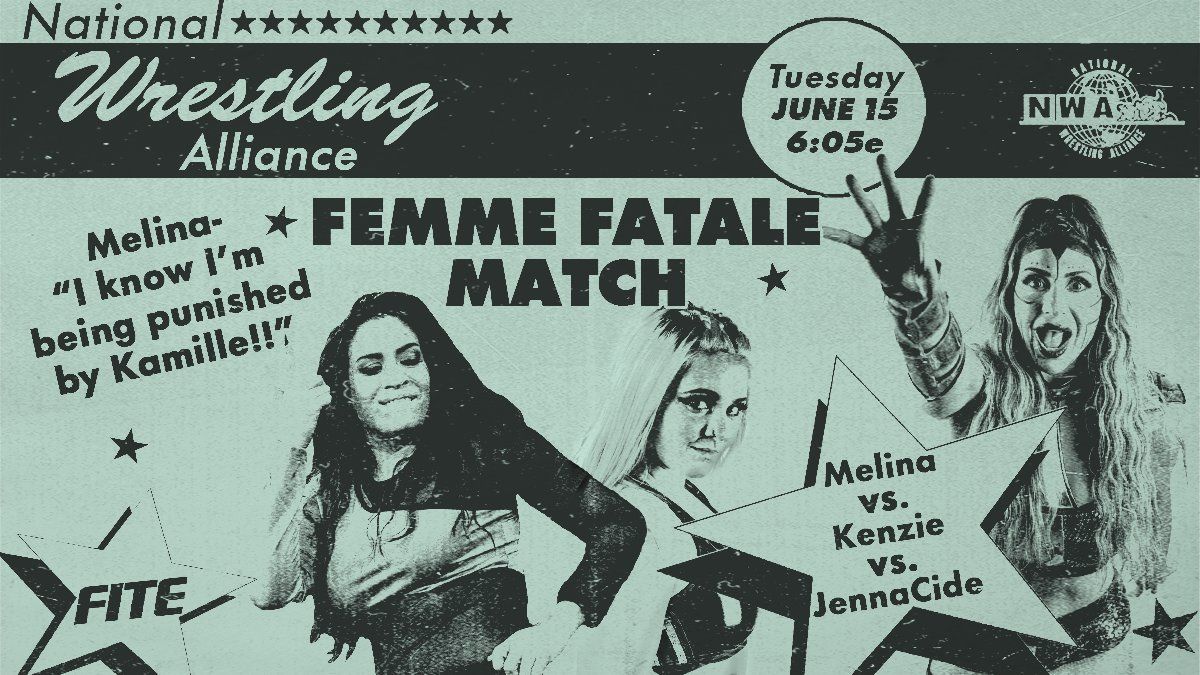 Melina vs. Jennacide vs. Kenzie Paige

Making her debut is Kenzie, at 19 years of age.  Both Melina and Kenzie are half the size of Jennacide, so it’s smart that both of them double team and try to take Jennacide out, but Jennacide is all that and a side of extra fries, as she answers back with a double clothesline.  But the numbers prove too much as Jenna is sent to the outside, and Melina and Kenzie take over in the squared circle.  Both are evenly matched, and the rookie Kenzie is in the driver’s seat, but Jennacide comes back, and picks up right where she left off, and gets a short clothesline to pin Kenzie for two.  She transitions Kenzie nicely into a sharpshooter submission, and Melina gets behind her with a sleeper.   Jennacide stumbles about, and backs up Melina in the corner turnbuckle to break the hold. Kenzie is in the corner, and Jennacide goes for a tackle, but Kenzie dodges and Jennacide goes out of the ring.  However, the veteran instincts of Melina rolls up Kenzie for the pin and the win.

Your Winner via Pinfall:  Melina

Melina is happy with herself, and Jennacide just looks on in disbelief.

Back to May Valentine with Kamille, and around her waist is “The Burke”. Kamille is annoyed, nay, furious, that Melina tried to interrupt her moment. What has she been doing in the NWA, Kamille wonders.  May soldiers on, and asks what her thoughts are on her fiancée, Thom Latimer, in the same match as Adonis for the NWA National title match.  Kamille is confident that her man Latimer will take the National title, and keep it Strictly Business.

Now to The Podium with Kyle, who’s with Sal Rinauro and PJ Hawx, Talking their match for the number one contendership for the NWA Television title.  Rinauro lists the people that held the title:   Tully Blanchard, Arn Anderson, Dusty Rhodes, and Sam Houston (OK, maybe not him.  Hope they edit that in post). Hawx is ready to taking on the tradition, but Colby Corino comes out, and can’t believe he has to demand a shot. 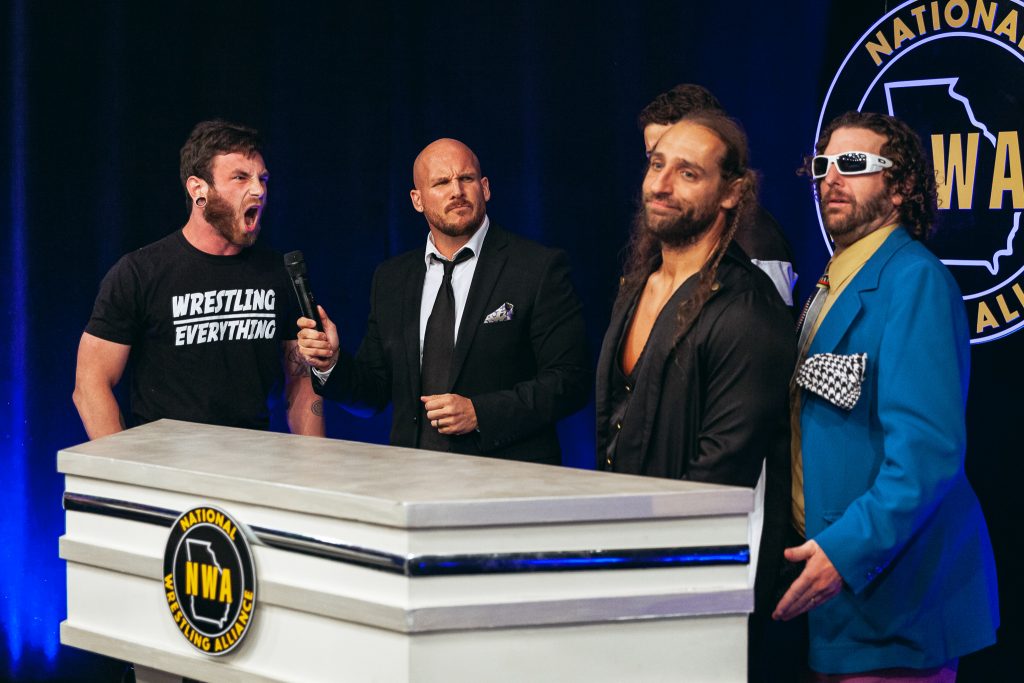 Corino asks what Hawx is looking at, and Hawx says let’s make it a triple threat match next week, and Colby is all for that.  Hey, what’s one more in the ring, right?

Well, let’s get to the next match…

Stevens and Hawx in a traditional technical match to start, and the younger Hawx has some moves in this exhibition between the two members of their respective tag teams, but Stevens shows that veteran experience, with a head butt and a suplex for a cover of two.  But La Rebelión come in and stomp both men, and the ref calls the match.

Luke Hawx comes to save his son, but Bestia 666 and MechaWolf target the father, and land The Mark of the Beast (Doomsday Device setup into a lungblower).  As they approach The Podium, They cut a heel promo in Spanish (and for those of you that, like Kyle, didn’t pass Spanish in high school or took Rosetta Stone, Mecha provides this translation). 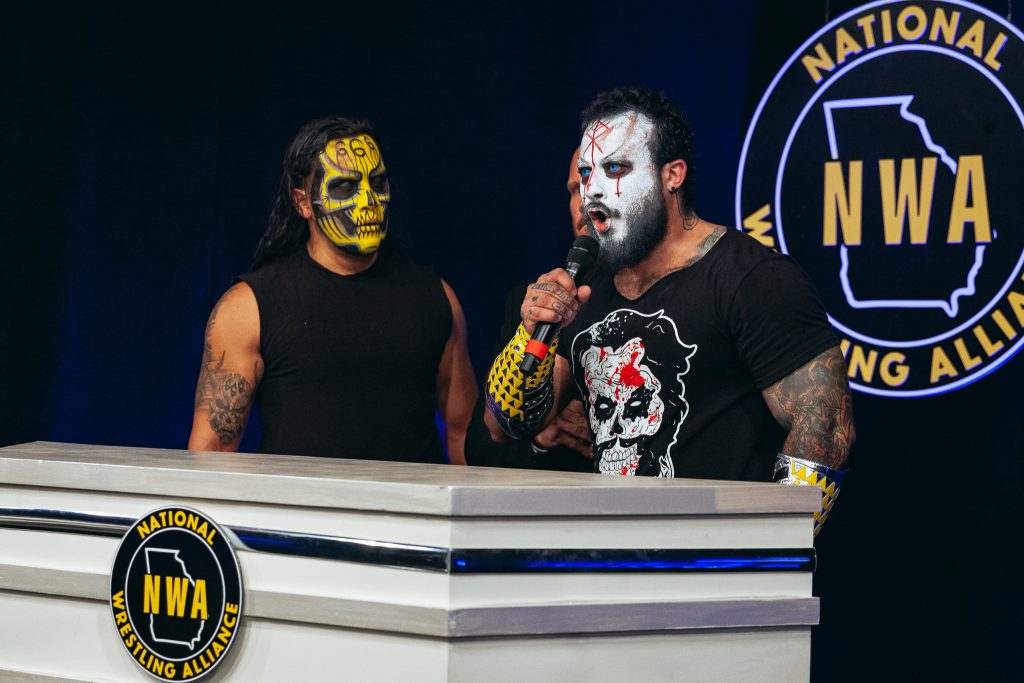 “The Bad Wolf!  Bestia 666!  We come for everybody, and anybody holding gold en la compania!”

Mecha points to both Aron Stevens and Kratos, along with Luke and PJ Hawx.  If you didn’t get the language, you can sure get the gist of the lingo.

Backstage with May Valentine, with The Masked Man (aka The Son of The Question Mark ™). Slice Boogie and Marshe Rockett come out, and trying to figure out homeboy here.  Slice can’t figure why May is looking to hang with this dude, and tells May he’s done with her. 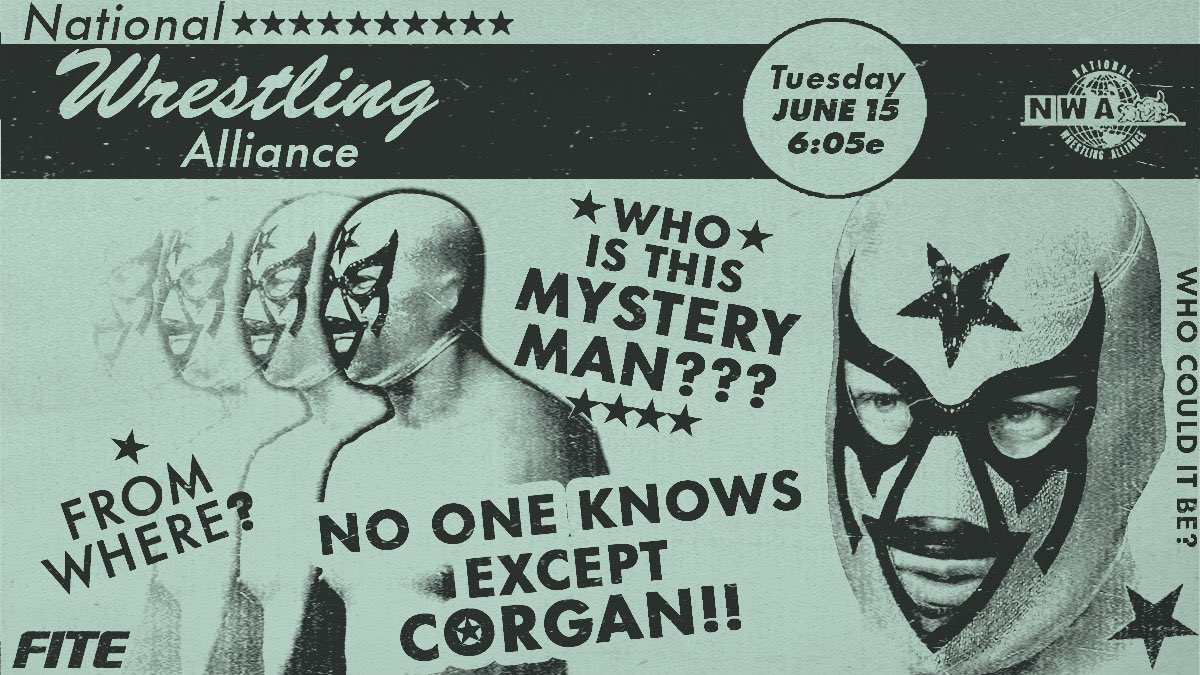 Now I don’t agree with how Slice handled the situation, but I understand what it’s like when you see a woman you dig is around some guy that’s not even on the same level.  But enough about Provo, UT…

Off to The Podium with Kyle, And Strictly Business and The End are staring daggers at each other.  Thom Latimer, Chris Adonis are part of the tournament, along with Parrow, starting next week.  Latimer points to Parrow and says he is doomed (Doomed, I tells ya), and Adonis says he never lost the strap.  When Kyle asks how would the either feel if the belt was with someone else, and neither man is worried, since they’ll keep it Strictly Business.  Parrow, though, says this:

“I get it. You don’t respect me… but I’ll tell you something. By the end of our match, I’ll beat the respect into both of you.” 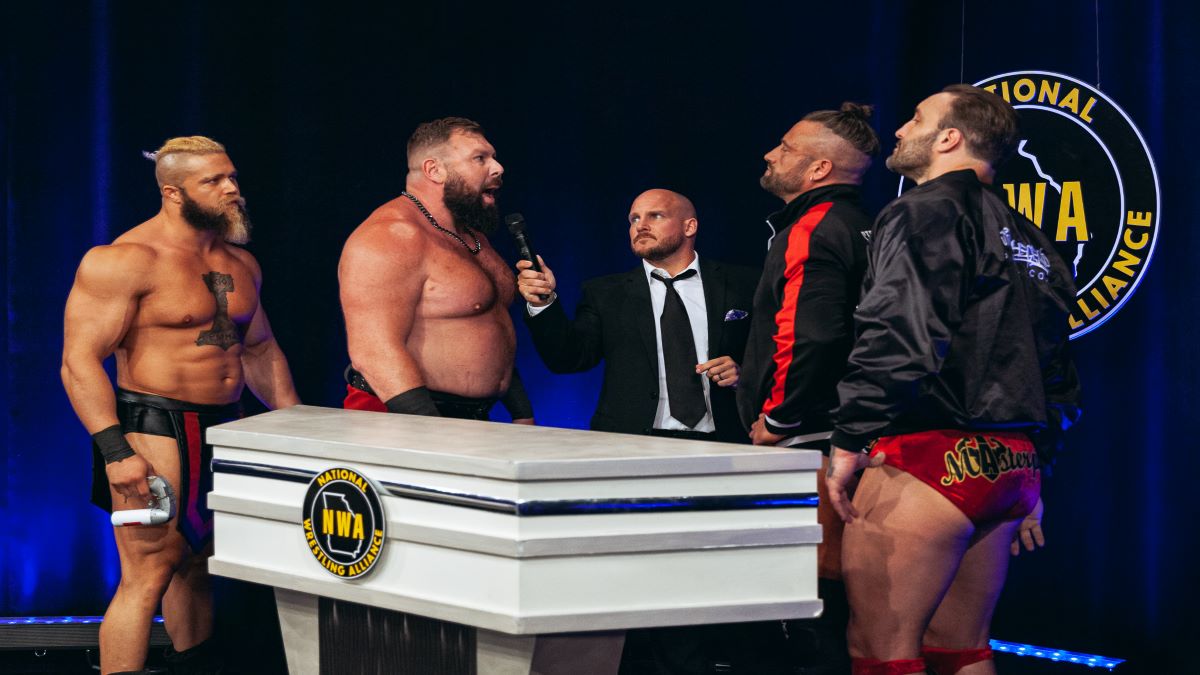 And I believe that, too.

Galli is with Da Pope to call the Main event, And the first of the triple threat match tournament to who will get a shot at the NWA National title. 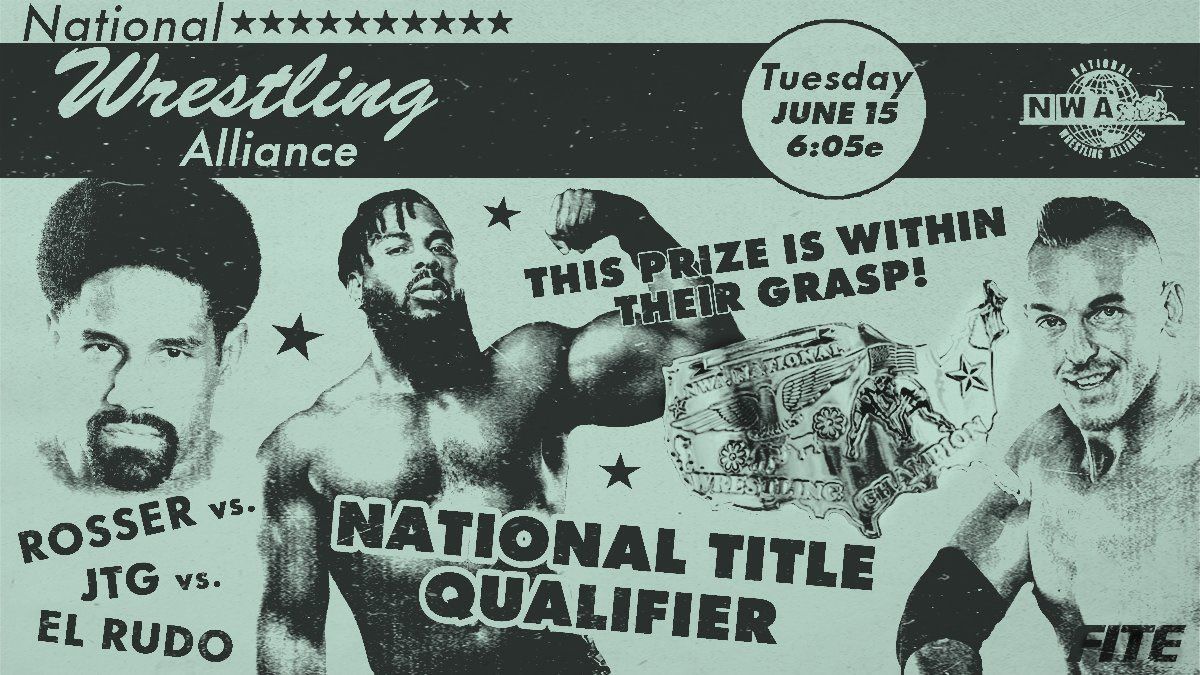 Fans Chant for “No Days Off”, and he is the favorite in this match.  Bell rings, and Rudo wants to work with JTG or Rosser on the other, and they ain’t feeling it. JTG and Rosser come together to talk it out, and decide to team up on Rudo.  JTG stomps Rudo, and Rosser tries to takes advantage by rolling up JTG, and you best believe he ain’t happy.   As they jaw jack at each other, Rudo gets the arm of Rosser, and tightrope walks to a double clothesline on both men.  Now, Rudo is in full control, and goes to work on Rosser and JTG, giving the latter a double underhook suplex to JTG and then back to Rosser clubbing his chest.  A back bodydrop to Rudo by Rosser and a clothesline over the top rope by JTG sends out Rudo, and Rosser goes for a roll up for a two count.

Now Rosser steps up with a powerslam to JTG, and covers, but Rudo breaks up the count.  An impressive STO clothesline from Rudo to Rosser knocks down “Mr. No Days Off” for a count of two.  Now JTG is back with a drop down uppercut and a belly to back suplex to a wicked looking cutter.  From here this part of the match showcases Jay Tha God’s offense, and OMG, he hits a belly to back suplex to a modified neckbreaker on Rosser.  El Rudo breaks up the count, and gets a brainbuster on Rosser for two.  Rudo sends Rosser out, and keeps badmouthing JTG, but that is No Bueno, as they say in Germany, as JTG gets El Rudo in the Brooklyn Edge (a crucifix position to a cutter) that connects for the one, two, and three.

Your Winner via Pinfall:  JTG

JTG Walks to the podium, and delivers this promo to close the show:

More a table setting episode than anything, but oh, what a spread!  With Melina back to wrestling, to new faces (and repurposed ones in the case of Jordan Clearwater), this new season of NWA looks to be good.

Also, If you have never seen the works of El Rudo (Sam Adonis) or you have only been familiar with JTG from Cryme Tyme, you seriously need too look at those two and the work they’re doing now.

Until Then, See you in Seven!