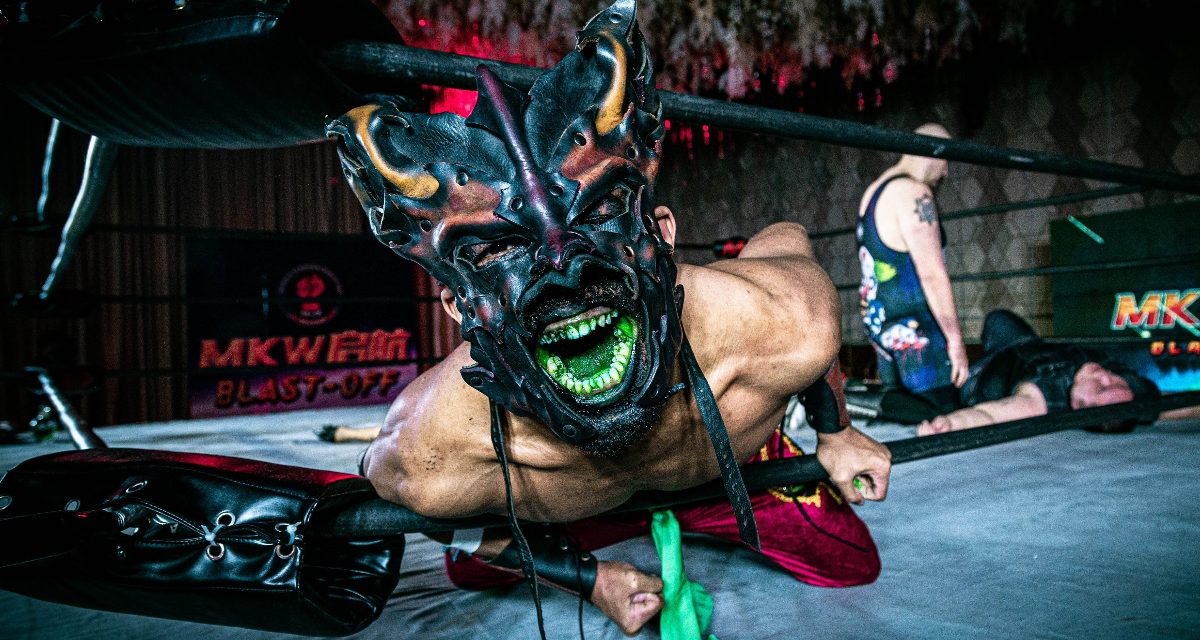 Cold open promo from “PK Mode”: Black Mamba and Bamboo Crusher. They have a message for the stable that although it could be any combination of the 3 due to their Freebird rule, PK Mode is ready for any of them and will advance to the tournament finals.

This week we are welcomed by Beastface who is on commentary instead of the usual Xiao Jie Men. He recaps last week and runs down this week’s matches.

On their way to the ring the Mascaras get a PIP promo. It’s from last week and explains the match tonight. They want to put ESL’s teaching methods to the test once more, and are ready to accept a rematch any time.

Once in the ring Steve grabs the mic and explains how when Tao follows his instructions things go well. He says the match is solely Tao’s responsibility but wants to start with Plata who he refers to as “burrito boy”. This dynamic will hopefully add a new dimension to this familiar match we’ve seen recently.

The two bigger teammates face off with displays of strength through a lockup, chops and forearms. Plata gets the upper hand in all categories, prompting Steve to tag out and Plata follows suit. 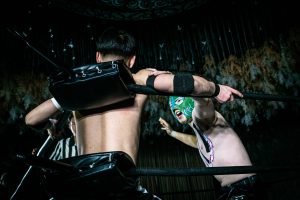 Poseidon dominates Tao even more severely with an array of high flying lucha techniques and strikes. After a standing frog splash he gets a two count and tags in Plata. Plata methodically strikes and slams Tao around the ring. But Tao slips out of a fireman’s carry and lays in an enzuigiri to change the momentum that results in an eventual superkick for two. Tao keeps control and goes for a fireman of his own but ends up getting Mexican slammed. Plata tags in Poseidon.

It really seems Tao is trying to win this one alone.

After some offense by Poseidon that culminates in a bulldog, Steve has enough and enters placing Poseidon in a double under hook submission and also dispatches Plata.

Despite this Poseidon super kicks Tao and proceeds to stunner Steve as well. Another for Tao and Plata with a big side suplex on Tao. He sends Poseidon in for the cover and Steve barely breaks it up. A repeat of the suplex by the illegal Plata spells the end when Poseidon covers Tao.

The Zombified Johnny stands in a stupor at ringside as Dragon and Saga start.

Dragon starts with effective creepy mind games and Cui responds by attempting some of his own but Dragon is always able to answer whatever Ciu throws his way. Cui tags Saga.

Saga gains the upper hand with size and strength and tags in Cui to double team but Dragon sits up like a zombie jarring ATD enough for him to tag Johnny. 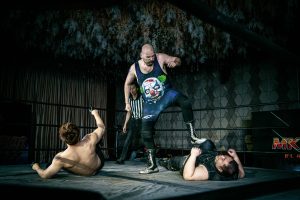 Little Johnny dispatches both of his opponents with ease

ATD both attack Johnny to no effect. Johnny ends up clotheslining the two. He tags Dragon and they scale the ropes for a splash each on their opponents for the stereo three.

The Stable starts with a stereo shove before the bell but PK Mode turns things around. With Money on the outside they double team Sam.

Right when it seems Mamba (unbelievably) has Sam up for a slam he tugs Mamba’s knee to counter and gains the upper hand.

Sam and Money take turns on Mamba until he finally boots a running Sam and follows it up with a rana off the middle rope.

A cold tag to Crusher who is immediately big booted to the ground by Sam.

Sam and Money hit their signature moves on Crusher. Money has Crusher in trouble with a sharpshooter but Crusher gets to the ropes.

With Crusher on the outside, Sam lures in Mamba so Money can bash Crusher’s head into the post behind the ref’s back.

Sam underestimates Crusher who is able to get in some kicks and then a DDT which allows him to tag, as does Sam. 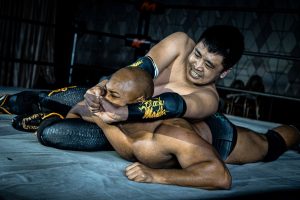 Black Mamba with a crippler cross face on Uncle Money

Mamba is on fire as he attacks Money. After a couple of ineffective DDTs he hooks Money in a crippler crossface. This prompts Marie to get on the apron. Crusher pulls her down to prevent interference.

Marie accuses Bamboo Crusher of sexual harassment! As they get into it verbally Money hits his spear on Mamba for the win.

Especially of the heels of last week which was the best episode of the season this episode falls flat. Not much for anyone who doesn’t like tag team wrestling which we get in all three matches. Better ref work this week but there is more bad technique on display than usual.